With this surreally bad, conservative response to "Fahrenheit 9/11," the year of the political film finally hits rock bottom. 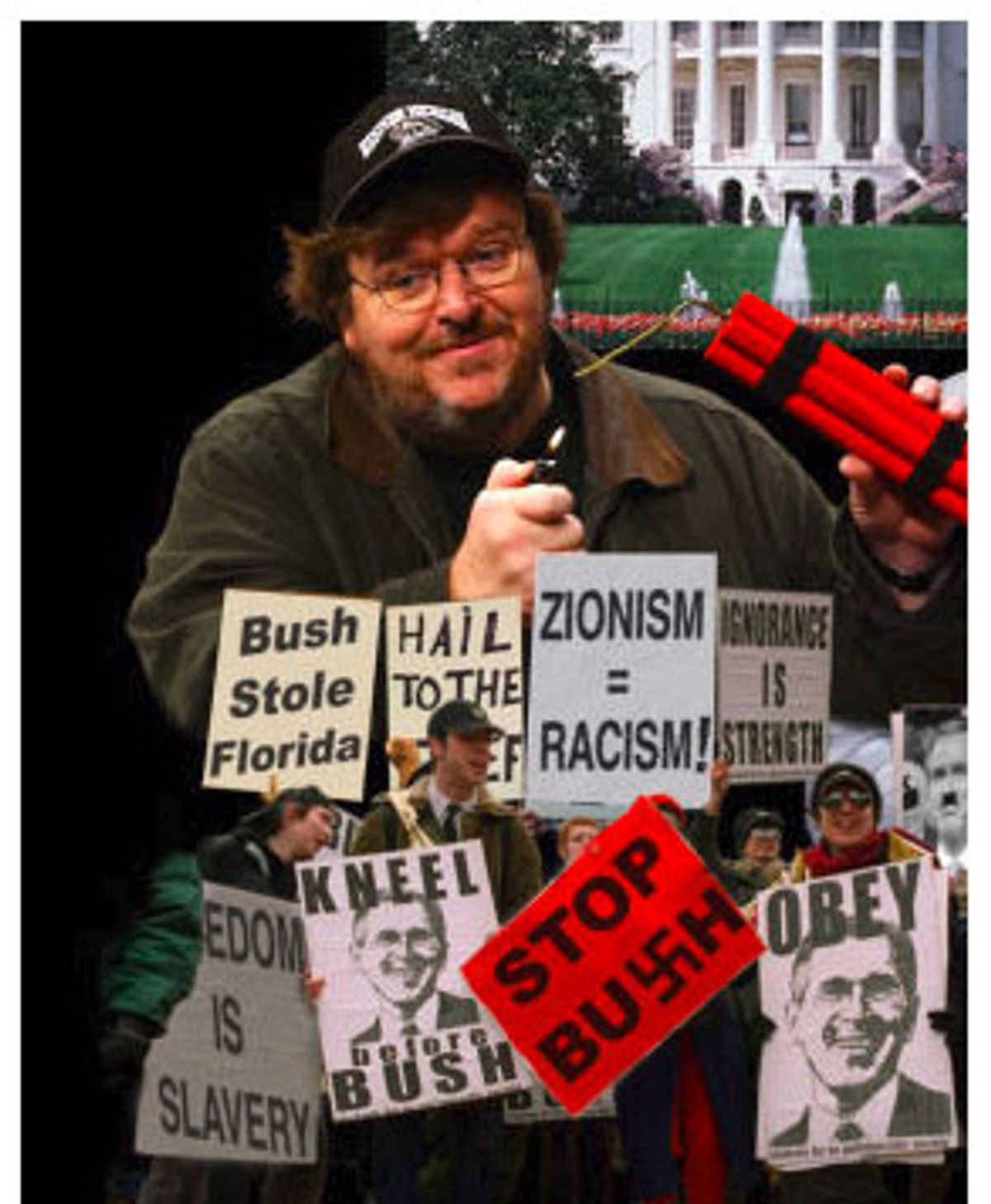 Of all the political documentaries released this year, made by filmmakers on either side of the ideological fence, "Celsius 41.11" has to be the weirdest. The picture was released by an organization called Citizens United, as a response to Michael Moore's "Fahrenheit 9/11." Citizens United identifies itself in its press release, with an almost charming straightforwardness, as a conservative grassroots group -- in other words, these are the guys in the black hats, so brace yourself for lots of anti-Kerry invective, terrorism buffs who display their remarkable grasp of delicate foreign-policy issues with pronouncements like "You gotta get them before they get you. End of story," and, perhaps most fearsome of all, conservative radio host and alleged film critic Michael Medved's rumpled, woefully stayless shirt collars. (As we learn in the film, Medved, in his reckless youth at Yale, used to be a liberal -- apparently, an aversion to the hopelessly bourgeois activity of ironing is all that remains of his dalliance with the left).

"Celsius 41.11" tells us in no uncertain terms that Bush won the election fair and square, that weapons of mass destruction kind of existed in Iraq, that John Kerry may mean well but is unfit to lead our country, and that the PATRIOT Act is designed to protect Americans, not hinder their civil liberties. In support of these incontrovertible truths, we hear from people like Bill Sammon of the Washington Times (or, as I like to call it, "Moonie River"), think tanker Michael Ledeen of the American Enterprise Institute for Public Policy Research, Swift Boat Veteran for Truth (stop it -- you're killin' me!) and Nixon White House-approved vets' spokesperson John O'Neill, and "terrorism expert" Monsoor Ijaz, as well as the aforementioned Medved. When the writers (Lionel Chetwynd, who directed right-wing fave "The Hanoi Hilton," and Ted Steinberg) need to fill in the gaps between these noted authorities, they put words into the mouth of an anonymous but authoritative narrator (could it be God himself?) who imparts assorted essential facts, explaining, for example, that after the 2000 election, there were "claims of black voter disenfranchisement," but those claims were "never substantiated." And believe me, they tried to find some people of color to talk to, but that would have meant leaving the neighborhood.

All documentaries are made by human beings with a point of view, if not an agenda, so there's no sense getting worked up over a picture that's an unapologetically unadorned Bush campaign ad (provided that's where you choose to put nine or ten bucks' worth of your moviegoing dollars). But "Celsius 41.11" is so bad it's almost like performance art, or those cheap records from the '60s, where the Chipmunks sing the Beatles' greatest hits. The movie's assorted facts are supported with footage of dead children lying in the streets (who are these children? where are these streets?), footage that the director, Kevin Knoblock (whom you may remember as the director of -- well, just give me a minute and and I'll think of it), evidently liked so much he decided to use it no fewer than three times. Footage from Sept. 11, including some of those nice wham-o shots of the planes hitting the towers, is used to show us how our world has been irrevocably changed, just in case we'd forgotten. While Michael Moore is hardly a master of subtlety himself, "Celsius 41.11" makes him look like Jean Renoir.

The title of "Celsius 41.11" is, thankfully, explained near the beginning of the film as the temperature at which the brain begins to die, a ghoulish little factoid that I guess is supposed to dance feverishly in our heads as we lie tucked into our beds on election eve. Or something. The movie is clearly designed to rouse us to a complacent, lazy kind of action: It ends with film clips of happy-face Bush (as opposed to stern, terrorist-stomping Bush) intercut with the images of assorted safe, cheerful citizens (cavorting children, hardhat-wearing workin' men, African-Americans buying lattes), all set to sludgily rousing string music. Particularly in New York City, where nobody bothers to show us campaign ads (we'd laugh them the hell out of Dodge if they did), this absurdly transparent hard sell is almost a novelty. The temperature at which the brain begins to die is irrelevant, when it's already been clubbed to death like a baby seal.