An excerpt from Stephen Elliott's hilarious new book, "Looking Forward to It: Or How I Learned to Stop Worrying and Love the American Electoral Process." 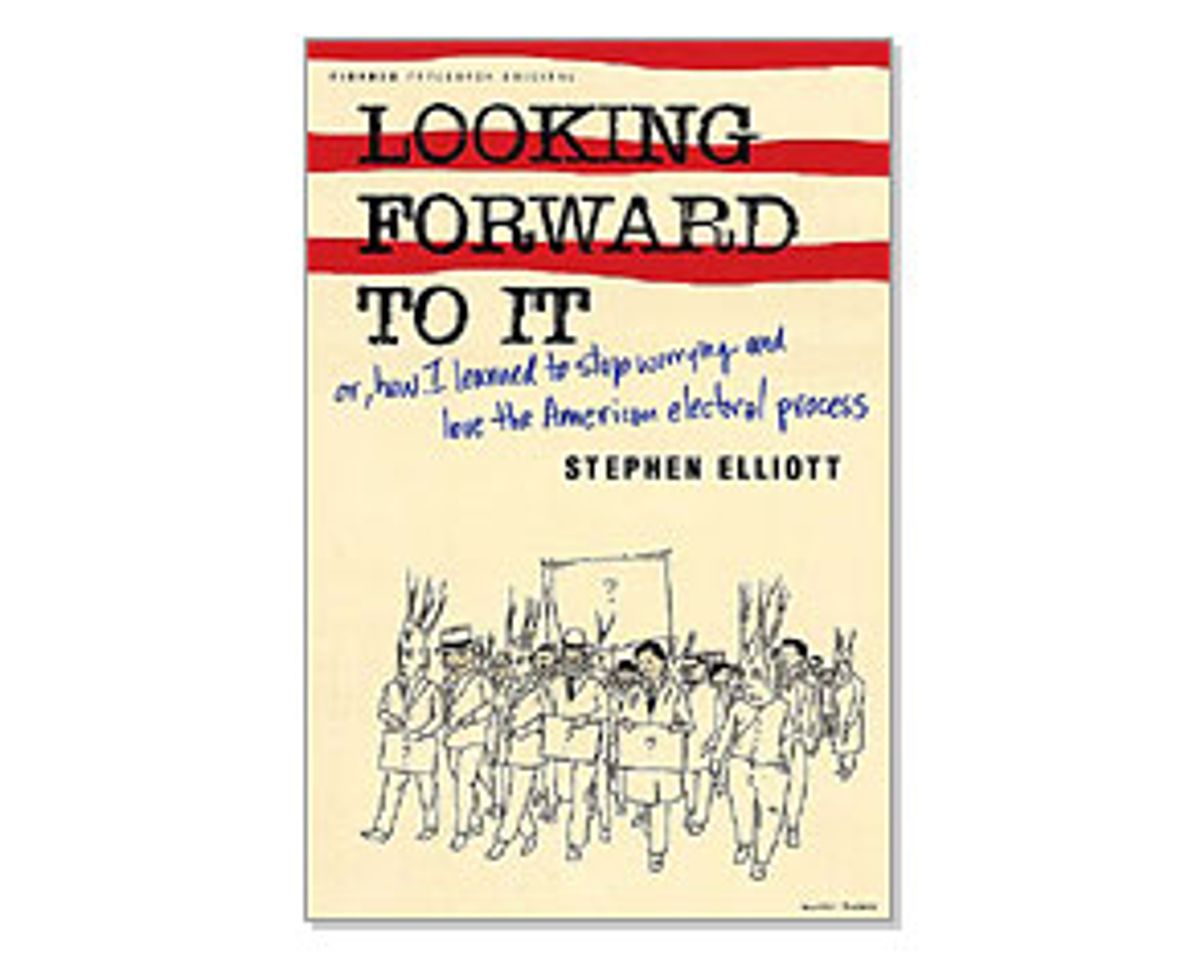 I run into John Edwards' press secretary, Jennifer Palmieri, in the basement of Holloway Hall at the University of New Hampshire just before the debate is about to start. Outside it's cold as hell, but there's a snack tray set up here with coffee and brownies. "You're with GQ," she says.

"It's down to Dean, Clark, and Edwards," she tells me, and I feel like we're picking up an old conversation, except last time we met Clark wasn't in the race, and maybe he still isn't. I'm going to need to meet the general soon, figure out where he's really at. The Washington Post has a quote from him talking to a counter woman at a Dunkin' Donuts -- "Do you make your donuts here?" "No." "So how do they get here?" I talk with Jennifer for a while and at some point she narrows her eyes on me, like she's suddenly seen deep into my soul. "You're smarter than you look," she says, and I realize that before this election is over she will tell me lies and I will repeat them, because she is strong and I am weak, and now that she's found me out I won't have much of a chance against her.

I still don't have a place to stay tonight. There's a postdebate party for credentialed press sponsored by the New Hampshire Democratic Party. I'm going to head there later and see if I don't have something I can trade.

The problem with the debate is that, with Al Gore endorsing Howard Dean, there isn't a whole lot to debate, except who is willing to bow out so a single machine candidate can mount a legitimate challenge to Howard Dean's thick-necked juggernaut. Most of the candidates are just pissed off by the whole thing. You can pretty much see it plastered over their curled smiles, just dying to get out, "Fuck fat fucking Al shit fucking Gore."

Kerry says the election isn't over until the votes are counted, which sounds good but simply isn't true. I can't blame John Kerry for being angry, though. He was supposed to win this thing. Sharpton says that nobody is going to tell the voters who they have to vote for, they will make up their own minds. But Sharpton isn't even running for president, not in the real sense. And saying that the voters will make up their own minds is really giving too much credit to the average American. Lieberman says he thinks his chances are better now that Gore is endorsing Dean. He says the money is pouring in and people are stopping him in airports. Edwards' basic response to every question is that he is an outsider. Edwards' constant harping on his outsider image really starts to wear me down in a bad way. It doesn't match his hair style or his suit. It might be when John Kerry says, "I love John Edwards," that I lose faith completely. It's the most amazing confession of the debate, and I have to turn to Shir Haberman from the Portsmouth Herald to make sure I heard it right. "Did John Kerry just say he loves John Edwards?"

After that every time John Edwards says he's an outsider I hear John Kerry saying I love you:

John Edwards: "I am very much an outsider."

John Edwards: "I'm an outsider. I have not spent my whole life in politics, like most of these folks."

John Edwards: "The question is, Who is in the best position to change what's going on in Washington? People who've spent a lot of time there, people who've spent most of their life in politics? Or somebody who comes from a different place, who's been fighting these people all his life? That's me, and that's why people should vote for John Edwards.

John Kerry: "I soooo love you. I'm just completely into you. I don't know what to do about it."

There are two hundred reporters in that room watching a big-screen TV but I am probably the only one who changes his mind about John Edwards.

1. I'd lied about the GQ affiliation. I was lying about Harper's.