As he rolls from Iowa to Minnesota, the Dem hits Bush hard on missing munitions. 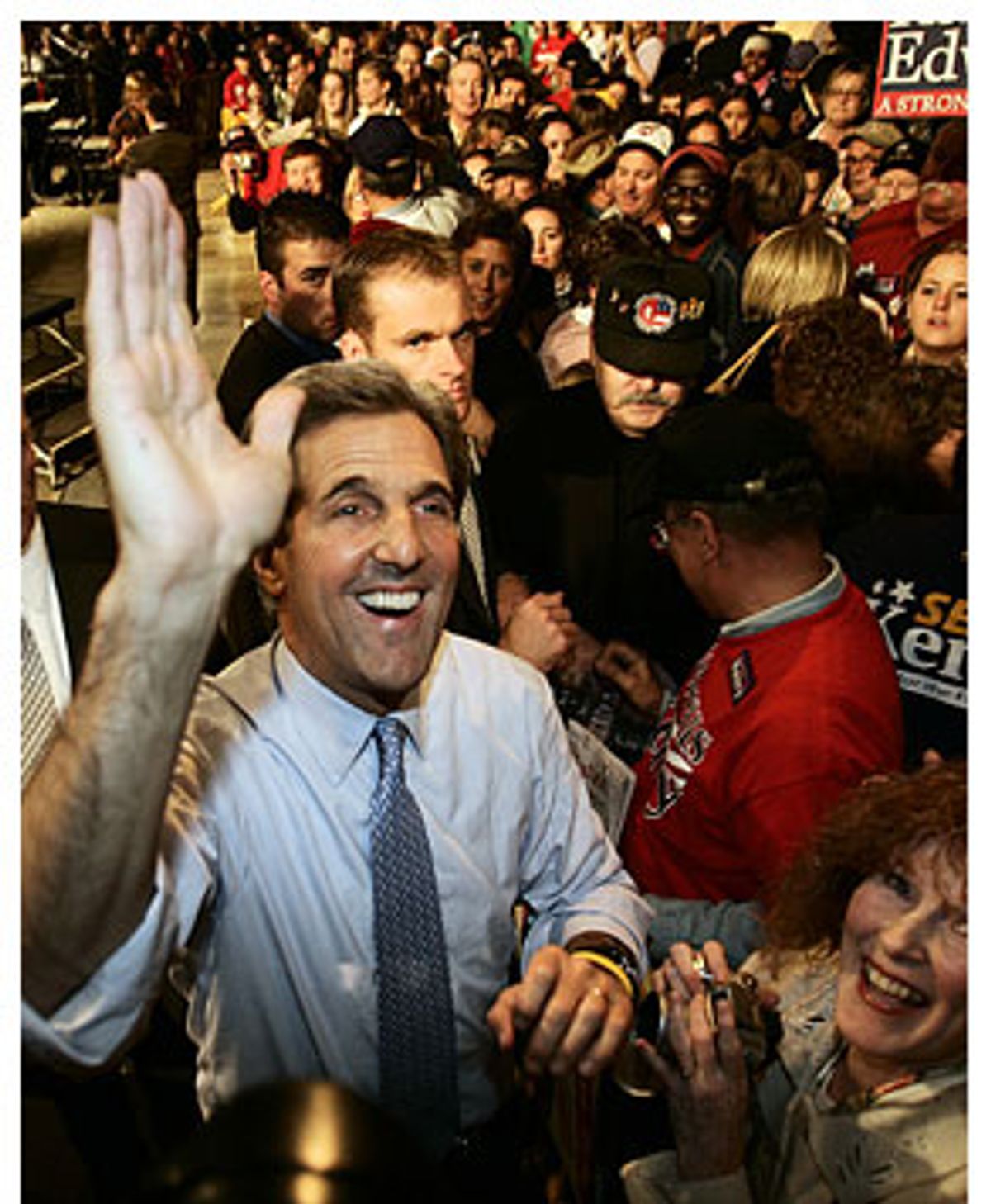 John Kerry is on the road today in the kinds of places you've never been unless you're from them: Sioux City, Iowa; Rochester, Minn.; then Cedar Rapids in Iowa again. At North High School -- "Home of the Stars" -- in Sioux City this morning, the breakfast laid out for the traveling press featured potato casserole with Corn Flakes on top. Outside, a kid held up a sign: "Four out of five terrorists vote for Kerry."

Iowa isn't Kerry country, at least not in any traditional steelworking or Starbucks-drinking senses of the term. But Iowa's got seven Electoral College votes, and Kerry may need them. Over the last week or so, Bush has held a slight edge in the average of all of the national polls. That seems to be changing now. Kerry is ahead in the new national Harris Poll and leads by two points in the ABC/Washington Post tracking poll. The Electoral College picture, however, seems ever more muddled. Kerry was leading in Ohio, but now the race appears to be even again. Bush was ahead in Wisconsin and Iowa, but Kerry may be leading now. Florida is back and forth every day. Hawaii and New Jersey suddenly seem too close for the Democrats' comfort, but maybe Arkansas and West Virginia are at risk for the Republicans, too.

So welcome to Warren, Mich., and to Albuquerque, N.M., and to Green Bay, Wisc. "If you're in California, you can sit back in your hot tub and enjoy your life," Wisconsin Gov. Jim Doyle told Kerry supporters at a rally in a Green Bay parking lot one night this week. But if you live in Wisconsin or a dozen other battlegrounds, Doyle said, you've got a "responsibility" to get energized and get out the vote.

That's what it's about now as Kerry, his staff and more than 100 members of the press careen across the country in two and sometimes three chartered planes. There are rumors of a round-the-clock, 72-hour, multistate blitz starting this weekend. But the days are already so long now that it may not feel any different. Kerry starts each day with an early morning speech aimed at setting the agenda for CNN and Fox News -- this morning in Sioux City, he said that George Bush is "bobbing and dodging" about the missing Iraqi munitions, and he called Dick Cheney the "chief minister of disinformation" -- and he's usually still on his plane, flying to the next day's starting point, well after midnight.

Usually, it all seems worth it. At rallies in the Detroit suburb of Warren and in Green Bay Monday night, Kerry's arrivals got rock-star welcomes -- and not just because Jon Bon Jovi was on hand to open for him. In Sioux City Wednesday morning, the high school gym was jammed with supporters who screamed for him when he arrived, hung on his every word, and cheered wildly when he finished his speech.

But it's not always that way. A Kerry rally in Las Vegas Tuesday evening was so flat that one photographer on the press bus said afterward that it reminded him of events Michael Dukakis held in the dying days of his 1988 campaign. A few thousand supporters turned out to see Kerry in Las Vegas, but they seemed lost in a big suburban park that could have held several times more. Nevada Sen. Harry Reid gave Kerry a rousing enough introduction, but -- in an odd and unhelpful breach of stage protocol -- interrupted Kerry when he started speaking to add a point he'd meant to make earlier. Kerry obligingly stepped aside so that Reid could talk for several minutes about a friend who will vote for Kerry because his sick grandkids may benefit from stem cell research.

Reid finally ceded the microphone back to Kerry, only to interrupt him again a couple of minutes later, apparently to remind him about someone he needed to acknowledge on the stage. Kerry brushed him aside but never really recovered. His jokes fell flat -- they often do -- his speech wandered, and whatever energy Kerry might have brought to the rally seemed to drift away across that big expanse of lawn. Midway through the speech, more than a few people wandered off -- a not uncommon occurrence among crowds who come to see Kerry but don't necessarily want to hear every last word he has to say on every subject that comes to mind.

But it's not always -- or even usually -- that way. Kerry spoke to a packed public square in downtown Albuquerque Tuesday night, and the place bristled with the excitement of people who know they're at the center of something big. There probably weren't any more people than there were in Las Vegas, but the plaza was full, and Kerry's supporters spilled over onto sidewalks and across the street. They were loud, and they were with him. Kerry was even funny. He said Bush is in a state of denial -- a place, unlike New Mexico, that offers absolutely no Electoral College votes.

At each stop, Kerry's speech is a variation on the week's theme: Bush fails to see the problems with the economy or with the war in Iraq -- especially when it comes to the missing 380 tons of what Kerry calls "highly deadly" explosives in Iraq. A Kerry aide said the candidate's hard focus on the lost munitions is the result not just of the "folks around him" -- a reference to the harder-charging former Clinton advisors who have reshaped the Kerry campaign in the last two months -- but also of the intensity of the race as it reaches its end. At rally after rally, Kerry says that the missing munitions could be used to "demolish entire buildings, blow up airplanes, destroy tanks and kill our troops." Crowds grow serious and silent, and at outdoor events you get the sense that you ought to be watching the sky for incoming planes. Maybe it's a scare tactic of the kind that Dick Cheney favors, but it's based in real-life facts -- those explosives really are missing -- rather than the vice president's dark fantasy about life under a weak and gutless John Kerry.

Kerry was supposed to be offering a series of distinct "closing arguments" this week, but he seems to have abandoned that plan so that he can continue to pound away on the munitions story. The story is so powerful for Kerry because it gives him what he never had before: a concrete, you-can-almost-feel-it argument for how Bush's war has made America less safe. It also provides Kerry with a way to counter the heretofore hard-to-dispute claim that the world is better off with Saddam Hussein in jail.

In the era of sanctions and inspections -- an era Kerry wanted to extend -- those explosives were a known quantity in a known location, sealed with tags by the International Atomic Energy Agency. International inspectors saw them at Al Qaqaa in March 2003, in place and apparently intact.

The invasion began soon thereafter, and now the explosives are gone. Bush's aides argued Tuesday that, because American troops didn't see the explosives when they stopped at Al Qaqaa on the way to Baghdad on April 10, they might have disappeared before the invasion began. But the commander of the Army brigade that stopped at Al Qaqaa on April 10 told the New York Times Tuesday that his soldiers made no effort to look for the weapons. "It was not our mission. It was not our focus," Col. Joseph Anderson told the Times. "We were just stopping there on our way to Baghdad. The plan was to leave that very same day. The plan was not to go in there and start searching."

Wednesday morning in Sioux City, Kerry accused the administration of dissembling and took Bush to task for failing to address the questions raised by the missing munitions. After two days of total silence on the issue, Bush finally fired back from the stump in Lititz, Penn., claiming that Kerry didn't know the whole story and shouldn't be making assumptions. Bush said that Kerry's "top foreign policy advisor admits -- quote -- 'We do not know the facts.'" It was apparently a reference to a Fox News appearance by former U.N. ambassador and Kerry advisor Richard Holbrooke, but what Holbrooke actually said is that the Kerry campaign does not yet know all the details of what happened when U.S. troops passed through Al Qaqaa. "I do know one thing -- in most administrations the buck stops in the Oval Office," Holbrooke said. The central fact -- the munitions were there, and now they're gone -- is not in dispute. But in a comment not without irony given his own error-laden path to war, the president said that a candidate who "jump[s] to conclusions without knowing the facts is not a person you want as commander in chief." Bush accused Kerry of using "wild charges" to "denigrate the troops in the field." In fact, Kerry has been careful to praise the troops each time he discusses the missing munitions.

At a muscular rally Wednesday afternoon before 7,500 supporters in Rochester, Minn. -- a swing area in a swing state -- Kerry said that Bush's "wrong decisions" had made America's troops less safe. "The bottom line is, your administration was warned. You were put on notice. But you didn't put these explosives on priority lists. You didn't think it was important. You didn't check for them. You didn't give the troops the instructions they needed. You didn't put enough troops on the ground. You didn't guard the ammunitions dump, and now our troops are at greater risk. That's the bottom line. Our troops are doing a heroic job. The commander in chief is not doing his job."

Just before the Rochester speech, a Kerry aide said that the candidate would be shifting his focus away from the missing munitions and more toward economic issues. But that was before the campaign had Bush's new comments, before Wes Clark called Bush's comments about a president who "jumps to conclusions without knowing the facts" a "very compelling and thoughtful argument for why he should not be reelected."

Given new life by the president himself, the missing munitions story is too good for the Kerry campaign to give up so soon. Bruce Springsteen hits the campaign trail with Kerry Thursday afternoon, and he'll become the story then. For now -- for Cedar Rapids tonight, for Toledo Thursday morning -- Al Qaqaa is where it's at.