After initial hesitation, the Democratic candidate comes out swinging on the Osama video. 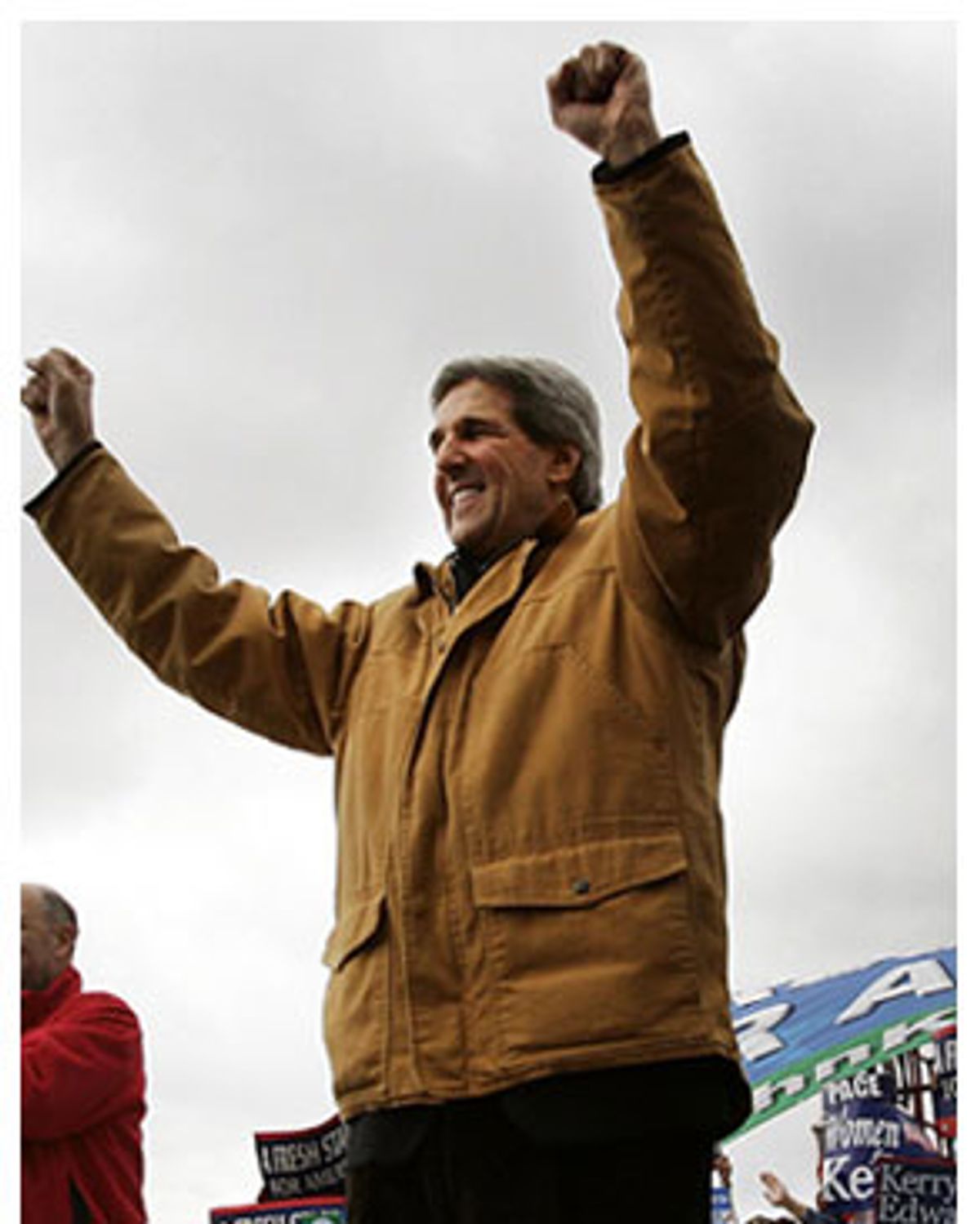 At a rally in Miami Friday night, John Kerry said Bruce Springsteen had provided the theme for his campaign: "No retreat, baby, no surrender." But then Kerry delivered a speech in which he seemed to do a little bit of both. On a day when a new videotape showed pretty conclusively that Osama bin Laden was neither dead nor "on the run," Kerry said nothing at all about the terrorist leader or the Bush administration's failure to capture him.

Saturday morning in Wisconsin, Kerry had his backbone back. At a rally on a muddy football field in Appleton, Kerry made the point that many in his party were waiting to hear from him: If Bush hadn't diverted the military's attention from the war on terrorism to the war in Iraq, bin Laden wouldn't be making any videotapes today.

"As I have said for two years now, Osama bin Laden and al-Qaida were cornered in the mountains of Tora Bora, and it was wrong to outsource the job of capturing them to Afghan warlords who a week earlier were fighting against us," Kerry said. Instead, Bush should have relied on U.S. troops, he said, soldiers "who wanted to avenge America for what happened in New York and Pennsylvania and Washington."

"It was wrong to divert our forces from Afghanistan so we could rush to war in Iraq without a plan to win the peace," Kerry said. "I will lead the world in fighting a smarter, more effective, tougher, more strategic war on terror, and we will make America safer."

Kerry's speech was a clear signal that, after a moment of hesitation in Miami Friday night, he won't be cowed by Republican charges that he has politicized the bin Laden tape. Kerry said nothing at all about bin Laden at the Miami rally, his only public event after the tape aired Friday afternoon. But the campaigns weren't done with bin Laden yet. Late into the night Friday, aides to Kerry and Bush played a high-altitude, cross-country pissing match about which candidate was "playing politics" with the tape.

On the late-night flight from Florida to Wisconsin -- usually a time for drinking and sleeping -- Kerry aides worked reporters on the press plane. Back in Washington, Kerry advisor Joe Lockhart held an unusual late-night conference call with reporters. Their predictable point: While the Bush team was accusing Kerry of making inappropriate, politically driven remarks about bin Laden Friday, the president crossed the line first and with much more partisan fervor.

Bush was apparently briefed on the tape Friday morning on Air Force One. After that briefing, he launched into his usual attacks on Kerry: He doesn't understand that Sept. 11 changed the world; he views the war on terrorism as a law enforcement action; he thinks the United States "must get permission from foreign capitals before we act in our own defense"; and he has "chosen the position of weakness and inaction."

Kerry learned of the tape later in the day, just after he spoke to a rally in West Palm Beach. As he frequently does, Kerry conducted a round of interviews with local TV stations immediately after the rally. In one of the interviews, Kerry said what he has said a thousand times before: Bush dropped the ball on bin Laden in Tora Bora by leaving Afghan warlords rather than the U.S. military in charge of the hunt. A few minutes later on the tarmac at the Palm Beach Airport, Kerry made a more cautious statement about the tape -- one he repeated in the course of his speech in Wisconsin Saturday. In the airport statement, Kerry said that "Americans are absolutely united in our determination to hunt down and destroy Osama bin Laden and the terrorists."

Bush followed with a strikingly similar statement Friday, saying that "Americans will not be intimidated or influenced by an enemy of our country." He added: "I'm sure Sen. Kerry agrees with this." But then, a short time later in Columbus, Ohio, the president railed against Kerry for his comments about Tora Bora, calling them "especially shameful in light of a new tape from the nation's enemy."

On the late-night call with reporters, Lockhart said Kerry knew only of the tape's existence -- and not its contents -- when he made the Tora Bora comments Friday. He then complained about the Bush campaign's loose association with the truth. "One more time, this administration can't tell the truth, and everybody on this call, I think, has a personal experience with being deceived by someone in the White House, of being lied to by someone in there, and you just have to go back in your memory bank and think whether you can trust what they say or whether you can trust what we say."

Saturday morning, the Bush campaign pushed back, e-mailing reporters excerpts from columns by David Brooks and Bill Kristol excoriating Kerry for talking about Tora Bora on the day the tape was released. Kristol wrote: "Is there any development in the war on terror, however grave, that the Kerry campaign won't try to exploit for partisan advantage"?

Of course, Bush has built his entire campaign around the gravest "development" in the war on terror, the attacks of Sept. 11. He talks about the attacks every day on the stump, just as he did Saturday morning in his weekly radio address. "Since September the 11th, 2001, I have led a relentless campaign against the terrorists," Bush said. "We have strengthened homeland security. We removed terror regimes in Afghanistan and Iraq. We are on the offensive around the world, because the best way to prevent future attacks is to go after the enemy."

Bush then said, "My opponent has a different view," before launching again into his usual attacks on Kerry.

Speaking to reporters in Appleton Saturday morning, Kerry spokesman Mike McCurry said the Kerry campaign "will not yield at all" in arguing that the "diversion of resources to Iraq left Osama bin Laden free to wander the globe."

Why didn't Kerry stay on the attack Friday night in Florida? McCurry said Kerry sometimes uses the Tora Bora argument in his speeches and sometimes doesn't, implying that the decision to exclude it in Miami was somehow just a coincidence. But nothing a candidate says -- or doesn't say -- this late in the game happens by accident, and the Kerry campaign was clearly struggling to find the right message Friday.

By Saturday morning, McCurry seemed confident that the campaign had settled on a "winning argument" -- about bin Laden and about everything else. He said the bin Laden tape, together with the story of the missing munitions from Al Qaqaa, "crystallizes" the question facing voters Tuesday.

But like everyone else, McCurry acknowledged that it's too early to tell whether the bin Laden tape will move voters -- or where. "What will be the impact of this, I don't know and you don't know," McCurry told reporters who crowded around him inside a school gymnasium in Appleton. "You can teach it round, you can teach it flat. We'll know Tuesday night."