"Nobody should have to go through so much to vote" 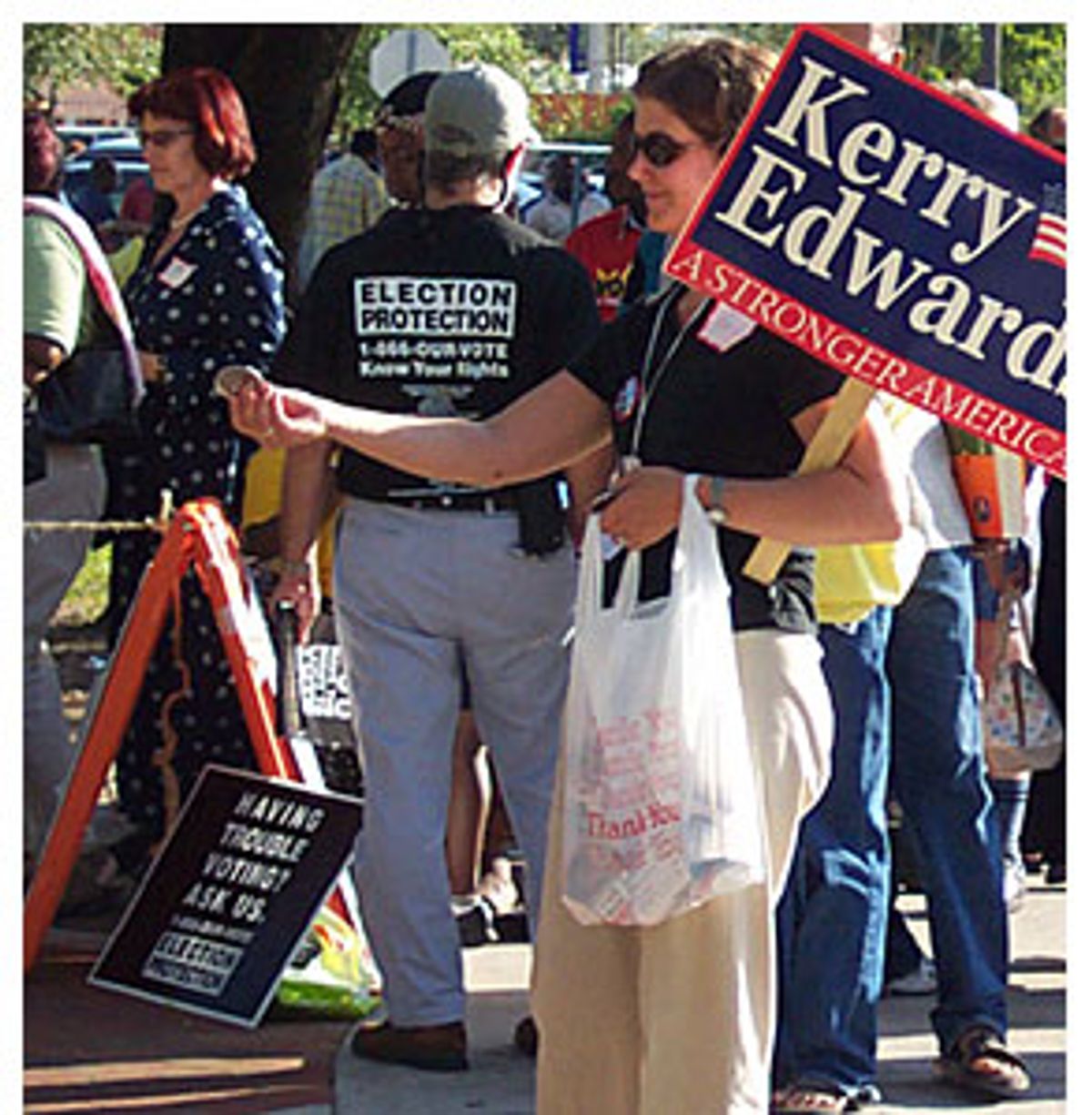 I'm deeply inspired by the African-American voters here in Florida. And angry at how hard it is to vote, due to horrific waiting times.

It's Monday morning. I'm very tired already, and due back volunteering soon. My group of four friends down here to monitor the voting process is in danger of burnout before Election Day, and we intend to pace ourselves today. I'm going to just blurt out some stream of consciousness notes before we go.

Saturday we were at North Dade Regional Library. Voters here are overwhelmingly African-American. Hot sunny day, with a line out onto the sidewalk. Standing in the hot sun, surrounded by a cacophony of bullhorns. We wore NAACP-Election Protection shirts and handed out voter bill of rights sheets with instructions about need for identification, right to vote if you are in line when the polls close, and more. Voters are leaving the building satisfied that everything was smooth. Only one man complains to us about the small number of machines, and fills out one of our forms.

We're concerned about the lack of water, and especially about the heat for curbside handicapped voters waiting to vote. We hear a few expressions of lack of trust about the machines. Two people told me that if this is stolen there will be revolution -- "a worldwide riot will break out."

A man sings "We Shall Overcome" through a bullhorn. When voters came out they said it went fine, and thanked us for being there, shining a light on the process. References to the civil rights movement are the theme of the day.

Sunday we were invited to a Miami-Dade Election Reform Coalition training, and attended a local group's discussion of how the new touch-screen machines are working during this first-ever early voting process. This organization is monitoring the technical election process, and is primarily concerned that all of the steps needed to close the polls and tally the votes are done in the proper order, and that the new system works.

Sound trucks, music blaring -- gospel songs in the parking lot -- mobbed by Kerry volunteers and leafleters for down-ballot candidates. Take-a-number situation set up in the large shady community building. Loudspeaker calling out voters' numbers like bingo. Kids, elderly, families waiting together. 4:30 p.m. We talk to a volunteer in an orange Community Relations shirt, who says the line is over two hours long. We go to eat and come back by 7.

When we return it is dark; tired people are still sitting strewn in chairs. There are over 200 numbers to be called. Not many small children or seniors are in evidence now, and the Election Protection volunteers tell us quite a few people have reluctantly given up. The crowd is still mixed in terms of the age of the adults. There is a fierce, stubborn determination and fatigue on the faces around. A young white Election Protection volunteer tells us that it's the Third World attitude of resignation and patience. (In some way, it felt more like a march or a sit-in. I thought about the patience that is opposite to resignation, the Third World tradition that Gandhi crystallized.)

Numbers were being called in tens and each group was ushered into the inside of the library, to an interior waiting room where 30 people sat out of the heat, waiting to go into the interior room with registration and polling booths.

It shouldn't be this way. Nobody should have to go through so much in order to vote. People coming out were tired, grim. One mom was met by her costumed kids, concerned that it was getting too late to go trick-or-treating.

The last voter left at 9:32. Four and one half hours after the line was shut down and tickets were no longer being passed out, a final voter emerged.

We are invited in to observe the shutdown, and are told that we will not get to see the numbers of votes cast, but we are prepared for that and have been asked to politely learn what we can but not impede, disrupt or challenge. The local group, the Miami-Dade Election Reform Coalition, is monitoring the polling process on a meager $5,000 grant and felt it could not defend volunteers who were arrested.

The machines in use are iVotronics. Forty-two machines will have to be processed tonight, all the votes offloaded but none tallied. The total vote count from the machines will then be matched against the total number of paper certificates filed at this polling place.

Two young white men who appear to be college students sit by the voter rolls laptops. We assume they are registered partisan watchers for this voting place. The breaking down of the polling place starts promptly enough, with poll workers counting paper certificates, declarations and affirmations, and other paper items. We're moved to where it is very hard to see exactly what papers are being counted. I have no sense that there was an attempt to hide the process, just a desire to do things by the book and get us out of the way, but the large team is talking and working, and it is not possible to hear numbers as they do their tallies. The poll clerk, supervisor of the action, spends a lot of time looking for something, asking where her version of the training binder is, and finally locates her official cellphone for calling in various tallies. She takes a counter device called a PEB and places it into the first machine of the 42 to be tallied. That machine takes an astonishing 12 minutes to download.

The Republican observer leaves, amazed and astonished that pizza cannot be delivered to him in this neighborhood. I hold my tongue. I'm not so much amazed that he has no idea what it means to be poor as amazed that 10 percent of those who live in this area could have supported Bush four years ago. We stay through the downloading of four machines, each taking more than 10 minutes to complete. The math is glaringly obvious. It's 11 p.m., and we phone in to our volunteer coordinator.

The word is that other sites have already been closed, using more than one final tally PEB device. We tell the clerk, and she says that can't be done at this site. We leave, thanking the poll workers for their heroics, hoping it really won't take all night.

Gail Williams is the director of Salon's communities, The Well and Table Talk