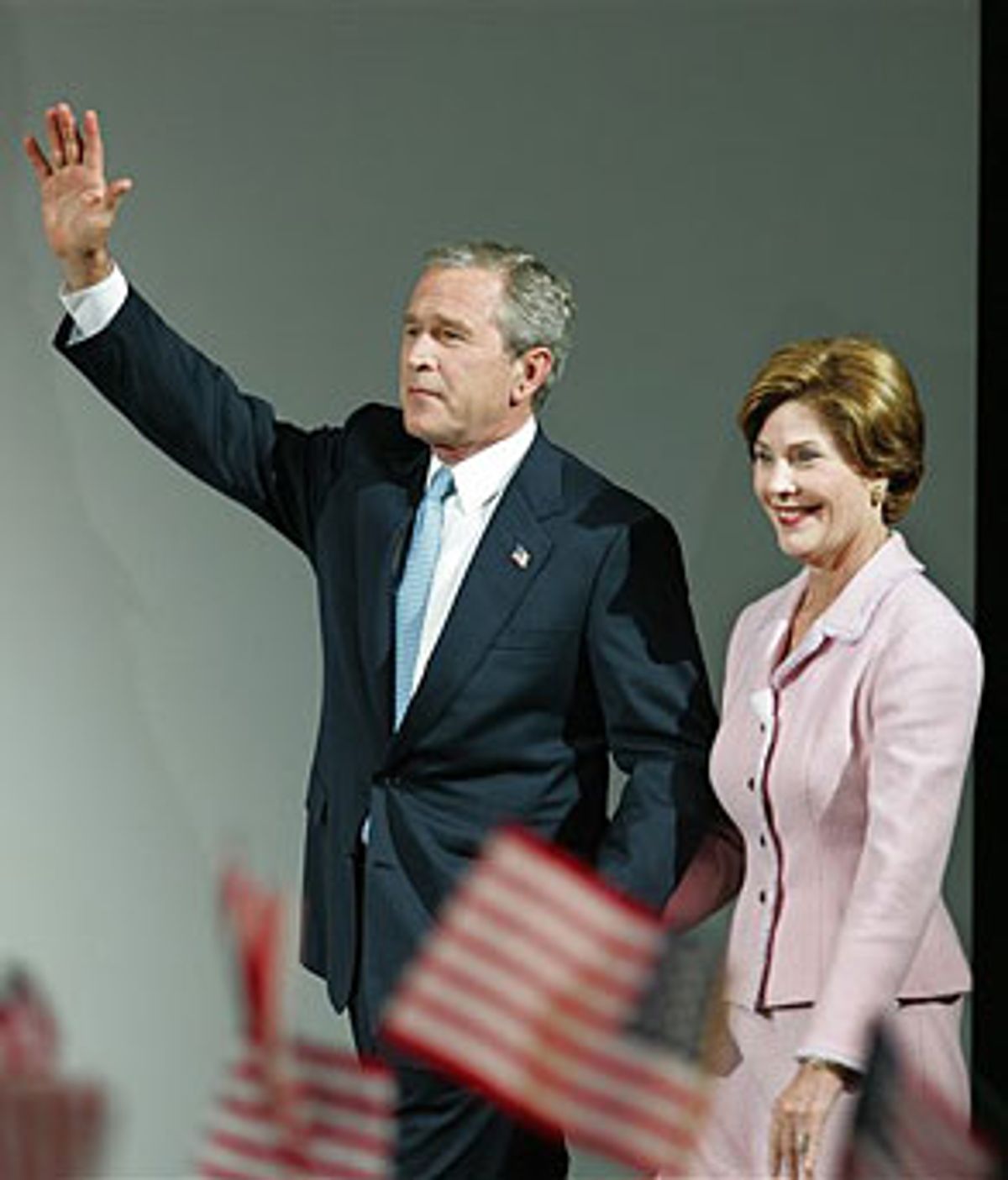 Well, America, how about that! Four more years of George W. Bush! Are we excited yet?

I am so glad America has seen the light and elected George W. Bush, not just because of four more years of the above, but because this wonderful Christian, God-appointed president will save us all from the abortionists and the queers who want to defile the sanctity of marriage.

I voted for Kerry, and obviously I'm angry and extremely discouraged at the outcome of the election. But it is high time that everyone acknowledge that the majority of this country has put its support behind President Bush.

You can say all you want about the Republican fear machine -- which is not to say that it isn't a powerful force -- but you have to hold everyone accountable for their own actions. And if the country can't see the problems with Bush now, can they ever? There is a much larger, and yet simpler problem here than you seem willing to admit: The majority of people in the United States support what Bush stands for. They oppose gay marriage, they believe Saddam had a hand in Sept. 11, and they believe that we can and must, indeed, that we have a right to eradicate all our perceived international threats. You saw it with your own eyes.

I watched at 7 in the morning here in Barcelona, Spain, as the popular vote tally of my home country gave an advantage to Bush of more than 3 million votes. Can I blame Bush for the votes he has received? The true identity of this country must now start to become apparent.

Kerry conceding is a slap in the face. After stating last night that all votes would be counted he concedes with possibly 250,000 provisional ballots uncounted in Ohio. I guess Bush was right -- Kerry is a flip-flopper. Knowing how weak Kerry is makes it easier to accept Bush's victory. However, I am 50 years old -- I can take it. I think this will really be a blow to young Democrats and new voters. Shame on John Kerry.

There is a Russian saying that could be roughly translated as follows:

This is precisely the problem with the Democratic Party.

Look at the electoral map. Kerry and Edwards did not offer a single issue that got an average Alabama redneck interested. Bush did. In retrospect, Dean was exactly right when he talked about "the guys in the pickup trucks with the Confederate flag on the back window." Instead, the strategy became to rely on the base. That, of course, failed -- Democrats have no single base. This is why they are called Democrats.

I'm not exactly a redneck, but I didn't really vote for Kerry either. I voted against our fine president. I contributed money to the Kerry campaign and the Democrats solely in the hope that they could make this four-year nightmare go away.

This is a very good time for the Democratic Party to take a good hard look in the mirror, and think of something to talk about with that Alabama redneck (incidentally, his neck is red because he works for a living). If the Democratic Party again concentrates on its collective balls the way it did in '00 and '02, they needn't bother asking me for my vote or donations anymore. It will be a waste of my time and money.

John Kerry didn't lose this election for the Democrats; he was qualified and more than man enough for the job. Rather, the Democratic Party lost this election for John Kerry. They lost it more convincingly in 2004, when they had a better man this time around than they did in 2000. When Michael Moore gets quoted by Osama bin Laden a few days before the election, and Democrats stand by his side, they should have known the jig was up.

The veiled contempt that many Democrats have for Christian fundamentalists didn't help, nor did the Democratic Party's focus on racial and sexual privilege legislation, or its base in America's wealthier Northeast, West Coast and upper Midwest. The Democrats deluded themselves by counting on the youth vote, forgetting that most liberal American youths are drunk, stoned or getting laid and don't start to care about things until they go through their P.J. O'Rourke-ish epiphany stage a bit later in life. Like in 1968, a silent majority won this election for the Republicans.

Bush's victory didn't bring any celebration to this household; I could have lived with a Kerry victory. Neither am I depressed. We should work together now as a nation to take on those who would detonate a nuclear weapon in New York Harbor. They are out there, hateful foreigners who'd like to see America hurt, and however you feel about the president, this is not an irrational fear. I love New York.

Not to get all Lady Bracknell on your Yankee asses but to choose G.W. Bush once is a tragedy; to choose him twice is utter carelessness. Bush and the rest of the junta have moved America forward for sure, but maybe not in the way you Americans had hoped. America is finally all grown up.

America has often been seen as a bit of an adolescent by the rest of the world. Awkward and prone to making silly mistakes, America seemed to make a mess of a lot of things but did so with such enthusiasm and hope that the world gave America a pass.

America embodied everything good about the young -- a fervent belief in potential and what could be; idealism and a sense of forward purpose. America had that "can do" attitude, doing things because they were hard, because they were exciting, because they were for the future -- stuff that the rest of the world could only wish they had the balls to do.

Sure, there was a dark underbelly and everything was not perfect, but for the most part America was the America of Elvis, of Utah Beach, of "On the Road," of the Jetsons, Mickey Mantle and Ford Thunderbirds.

But America has aged over the last four years. And it ain't pretty. America is now the beer-bellied ass who tells everyone else how to run their lives, kicks the cat and makes jokes about his spouse's butt in front of the family. America is the big guy on the block whom everyone tries to duck away from but can't because he's out there every day loudly telling everyone what he's going to do to so and so, and if anyone has a problem with that then they are gay. America is now a middle-aged oaf. America is now the America of Ashlee Simpson, porn, Abu Ghraib, NFL Sundays and gas-guzzling SUVs.

Yes, America is an adult now. Welcome to the neighborhood.

First, as a supporter of Dubya, I'm not gloating. The election is over, Bush has a mandate, "president-select" is passé, and so forth. The Dems have to go back to square one, and think about how they will become a viable party again, because a strong opposition is essential to a healthy democracy.

Second: As a longtime subscriber to Salon, I'm disappointed with how incredibly wrong the analysis contained within the past few weeks' articles concerning the election has been. Was it wishful thinking? Self-deception? Mass psychosis? I realize Blumenthal and Galbraith are partisan hacks, but virtually every single article confidently predicted a Kerry victory! Everyone's entitled to his or her point of view, but this time it was Salon that was the naked emperor. Come back to planet earth, Salon, and hopefully your articles will get back to their former quality.

I am so bitter, angry, disgusted ... it's the first time I ever cried after an election. Not just the presidential results, but my state (Oklahoma) results as well. We put a radical conservative who has foot-in-mouth disease in office for six years. He believes that doctors who perform abortions should get the death penalty. He called our state Legislature "a bunch of crapheads." He said African-Americans die earlier because they're genetically built that way. He said lesbianism is rampant in our schools.

I will never support anything this administration believes in. If Republicans want to know how the Dems feel, take how they felt during Clinton's last term and compound it. What do we have to look forward to? Social Security, Medicare, environmental policies: gutted. A record federal deficit and growing. Evaporating middle class. This is the continuance of the age of anti-intellectualism, anti-science, anti-reason and worst of all, anti-compassion.

Most of us in Canada were pulling for Kerry. Anyone with a shred of enlightenment would.

To all the disappointed Democrats out there: Come to Canada! Canada is what you'd like America to be. It is what America should be: strong, free, liberal, enlightened, secular and part of the global community. We will welcome you, and we could use the extra population. Let the Republicans have the U.S. (they already do), and go somewhere where you're appreciated and people "get" you.

Any American Democrats moving to Canada get a free Molson, on me. So come on up. It's really not that cold.

Many of my liberal friends are seriously discussing leaving the country, for Canada or Europe or New Zealand. It is, of course, tempting. How could we not feel a violent disillusionment and disconnect when we discovered this morning that the majority of voters in the country have a worldview we cannot comprehend? That hate and fear and ignorance can run a successful presidental campaign; that people will respond to these things with eager glee?

And if I wasn't tempted before leaving the house, one look at my car with its Kerry/Edwards bumper sticker -- the only car with such a sticker in the lot -- and how overnight it suddenly acquired a political statement consisting of eggs and shaving cream -- the only car in the lot so decorated -- certainly pushed me in that direction. I imagine the decorators (or their parents) voted on "moral values," as so many Bush supporters did.

But I'm not going to leave, and I made a list of reasons why.

Because this is my country.

Because I'm not letting them have New England autumns, New Mexico sunsets, the Grand Canyon, or Revere Beach.

Because Barack Obama, Ted Kennedy, Barney Frank and a few other stalwarts are isolated enough in a Capitol gone mad without their supporters pulling up and getting out.

Because over a million people voted for Alan Keyes, and that means even in Illinois we can't relax.

Because Massachusetts elected a far-right religious zealot in a gubernatorial race no one bothered to vote in.

Because I do, honestly, want my kids to be American citizens.

Because 200 years ago Americans believed in a separation of church and state, and if there's one thing we seem to be good at, it's regression.

Because we have to speak up even if they're not coming for us personally yet. We're educated and energized and relatively financially secure, and there are a lot of people out there who are none of those things and are at least initially going to suffer far more than we are. We have to speak for them if they can't speak for themselves.

Because this is still my country, and being female and pro-choice and pro-gay rights and an environmentalist and a pacifist and a believer in intelligent leaders and an atheist does not make me un-American or unpatriotic -- and that needs to be screamed from the fucking rooftops.

Because they vandalized my fucking car, and that is their level of discourse.

Because I am not afraid anymore. I am angry.