It's deja vu all over again, as Ohio really does become the new Florida. Down in the popular and electoral votes, Kerry hangs on, barely, while the Bush campaign claims victory. 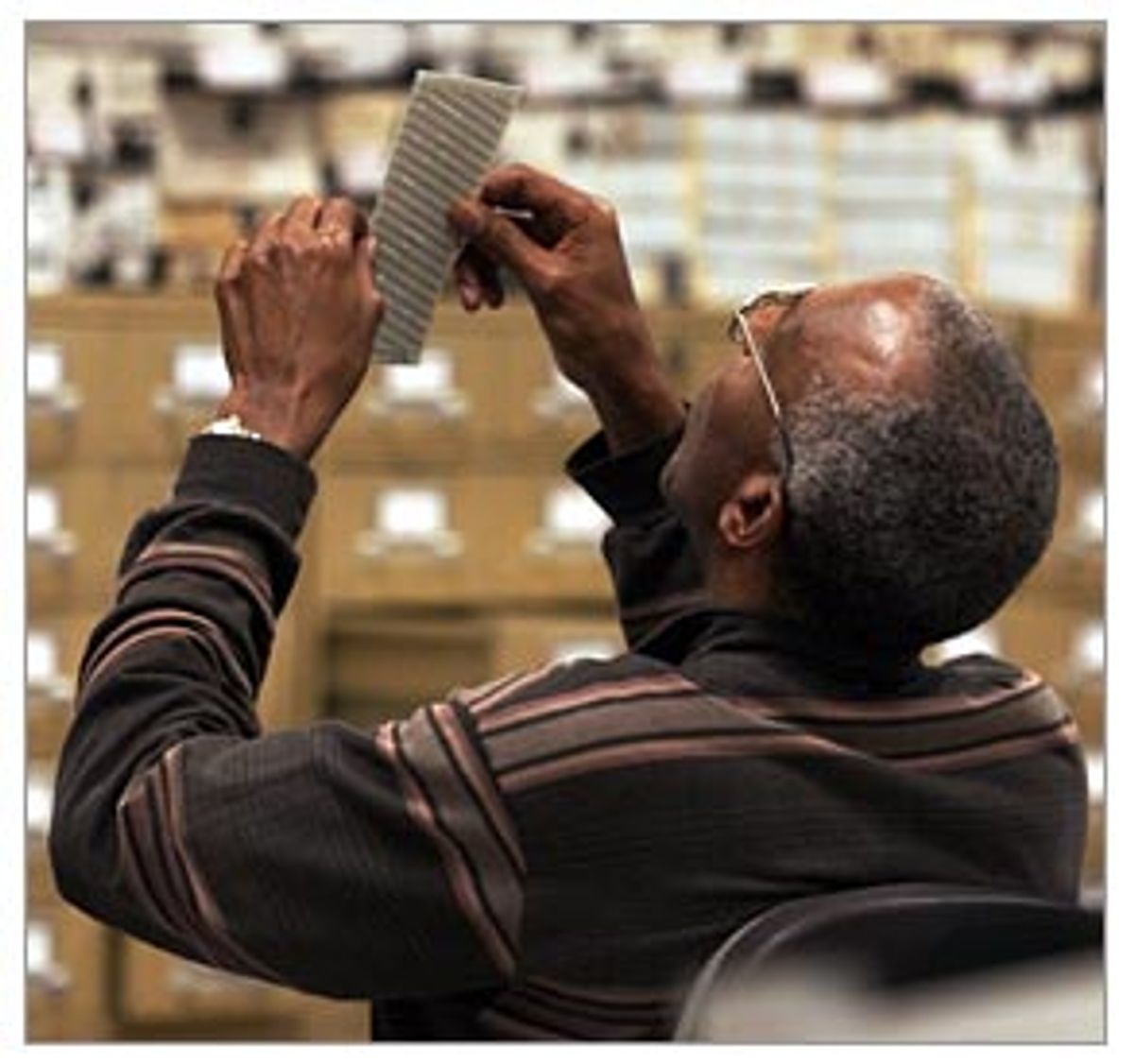 Sen. John Kerry didn't win the presidential election Tuesday night, but he might not have lost it yet, either.

As of 9 a.m., Kerry trailed President Bush 51-48 percent in the popular vote, with a margin of more than 3 million votes, and the Electoral College appeared to be out of reach. But appearances can be deceiving -- remember that time the networks called Florida for Al Gore? -- and the Kerry campaign is determined to make sure that appearance matches reality before anybody concedes this race.

The question mark -- for now -- is Ohio and its 20 Electoral College votes. At mid-morning, Bush led Kerry by about 135,000 votes in Ohio. But the Kerry campaign insists that the vote count in Ohio "has not been completed."

The Associated Press reports that at least 54 counties still had some uncounted absentee votes, and an AP survey of election boards found about 140,000 provisional ballots in Ohio, cast by people whose names don't show up on regular poll lists. Secretary of State Kenneth Blackwell estimated the number could be as high as 175,000.

After midnight the Bush campaign sent White House Chief of Staff Andrew Card to the Republican victory party at the Reagan Building in Washington.

The Kerry campaign estimates there are 250,000 provisional ballots. In a statement released early Wednesday morning, Kerry campaign manager Mary Beth Cahill said that, when the provisional ballots are counted, "John Kerry will win Ohio." And, also in the wee hours, the campaign dispatched John Edwards to Copley Plaza here, where earlier in the night 10,000 or so supporters had turned out for what seemed certain to be a victory party.

"It's been a long night, but we've waited four years for this victory, and we can wait one more night," Edwards told the small crowd that was still there, standing outside in steady, sprinkling rain. "John Kerry and I made a promise to the American people that every vote would count and every vote would be counted. Tonight, we are keeping our word."

Cahill's declaration and Edwards' talk of a "victory" were a little hard to square with the brutal math. If Bush ends up winning by 140,000 or thereabouts on the regular ballots, it's almost inconceivable that Kerry could make up that ground even assuming there are 250,000 provisional ballots, and they all turn out to be legitimate. And the thing is, we may not know for sure any time soon. Under Ohio law, the counting of provisional ballots does not even begin until 11 days after the election.

It was not at all clear Wednesday morning exactly what the campaign intended to do about the provisional ballots. And just after 3 a.m., campaign spokesman David Wade e-mailed reporters to say that they should "plan not to have any new announcements until 10 a.m. [EST] at the earliest."

By Tuesday afternoon, the Bushes might have been packing their bags at the White House. Polling over the last few days had trended away from the president, and the early exit polls Tuesday were devastating. Bush was behind by significant margins in most if not all of the battleground states. He would lose Pennsylvania. He would lose Florida. He would lose Ohio and Minnesota and New Hampshire and New Mexico. The president's surrogates were somber, and even Fox News seemed resigned to the end of the Bush reign.

It was a mirror image of the Kerry campaign -- and quite possibly a mirror image of reality, too. As the polls began closing Tuesday night, it seemed obvious to everyone near Kerry's campaign that the Democrats were going to win back the White House. Kerry's staff had oozed confidence all day -- at 1:30 in the morning Tuesday, Mike McCurry and Kerry spokeswoman Stephanie Cutter were dancing on the tarmac at a rally in Wisconsin -- and the exit polls gave Democrats every reason to think that their candidate would prevail. Inside the Fairmont Copley Plaza Tuesday afternoon, reporters who had entered a pool on Electoral College results worried that they hadn't projected a large enough margin for the Massachusetts senator.

But as unhappy early returns came in from Florida, late-afternoon joviality gave way to mid-evening tension. Joe Lockhart emerged from the campaign's war room around 10 p.m. to brief the national press. He reminded reporters that the early returns from Florida did not yet reflect the votes from Democratic South Florida. He said people in Ohio were still voting. "We feel very strongly that both of these states will come into our column once the votes are counted," he said.

Lockhart's words may have been heartening, but there was something worrying in his tone. People who heard him suddenly started to remember what it felt like four years ago, what it felt like to be ahead in an election only to see it slip away. At about 11:20 p.m., McCurry wandered into the press filing room. The networks "are getting ready" to call Florida, he said, "but we're doing well in a lot of other places."

What was implicit in McCurry's statement became explicit a short while later. At around 11:45 p.m., the networks began declaring Bush the winner in Florida.

At the Fairmont, a make-shift bar that had been full of back-slapping Kerry supporters a few hours earlier was mostly empty now. Four African-Americans sat looking glum in chairs circled around a television. As someone on the TV talked about the "upbeat mood" at the White House, a man slumped lower into his chair and pulled his hat down low over his eyes. In the hallways outside the bar, Kerry supporters walked back and forth, diverting their eyes from one another.

Shortly after NBC declared Bush the winner in Ohio, ousted Calif. Gov. Gray Davis huddled, grim-faced, with Tennessee Rep. Harold Ford. Ford declined to say what the election meant or how Democrats would handle four more years of George W. Bush. "I need to talk to the senator first," he said as he headed for the door. A woman stopped him on his way out. She was a Kerry supporter, and she wore a pass for the victory party on a lanyard around her neck. "I want you to tell me why everyone was mistaken," she said. Ford begged off and headed out the door.

Outside, it was raining. A small group of people at the party side half-heartedly chanted "bullshit." Not far from them, a Harvard student named Laura Settlemyer stood against a barricade, a Kerry campaign sign in the mud near her feet. She was hoping against hope that there was some Electoral College math that would work for Kerry even if he didn't win Ohio. The Greater Massachusetts Gospel Chorus sang "God Bless America."

Just two nights before in Cleveland, Bruce Springsteen had stood before more than 30,000 Kerry supporters and talked of the hope that this election might bring. He told them -- he told us -- that the "country we carry in our hearts is waiting." As Election Day becomes the day after, it still is.