Jude Law stars as an irresistible womanizer in a well-made suit in this remake of the 1966 classic. So how does he compare with original Alfie Michael Caine? 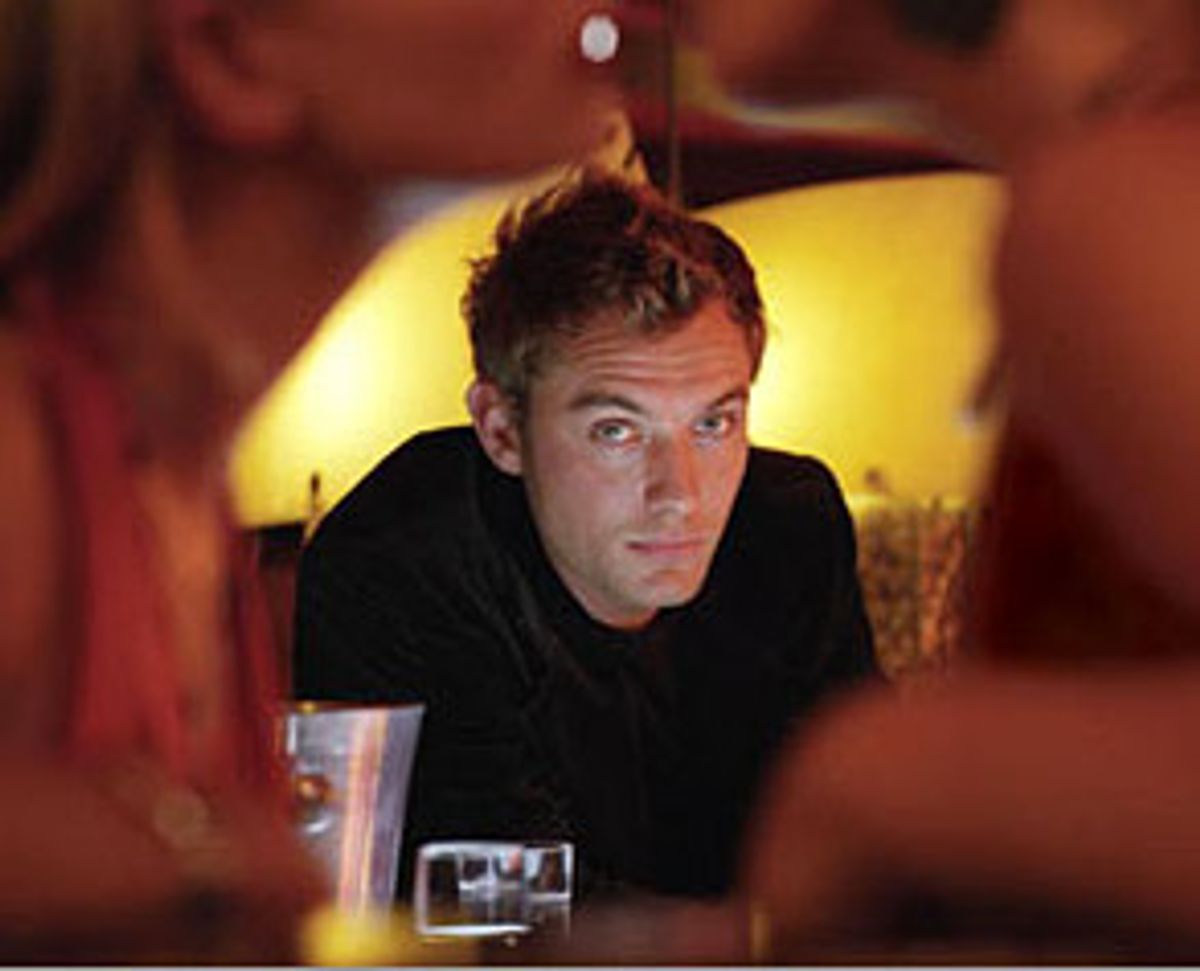 The problem with "Alfie" -- both Lewis Gilbert's 1966 original and Charles Shyer's new remake -- is that its story, a squooshy redemption fable masquerading as astute character observation, asks the impossible of its lead actor. The difference is that Michael Caine delivered the impossible; Jude Law can't.

In the original "Alfie," Caine plays a chilly cad who's irresistible to women: In just one instance of the picture's sledgehammer subtlety, he consistently refers to Jane Asher, the shy, eager-to-please country girl who slavishly cooks and cleans for (and sleeps with) him, as "it" -- the movie wants us to know that in Alfie's eyes, a woman ranks much lower than even a regular human being. But as Caine plays him, Alfie doesn't need to use harsh, impersonal pronouns: His coldness wafts off him like vapor off dry ice. He has a sensitive side, but it's fully veiled by that polar smoke -- we may get glimpses of the anguished, animal shape of his soul, but by design, we can't get close enough to smooth down and calm its fur. Still, we know it's there -- that kind of subliminal conviction is just part of what an extraordinary actor like Caine is capable of.

Jude Law isn't extraordinary -- at best he's just raffishly appealing -- so you almost can't hold it against him that he underdelivers in a role that's more a conceit than a character, anyway. This new "Alfie" takes place in modern-day New York (instead of London, the setting for the original), and co-screenwriters Shyer (director of the schmaltzy "Father of the Bride" remakes, as well as cuddlefest "Private Benjamin") and Elaine Pope have taken quite a few other tweaks and tucks and pinches to make the story more believable for modern audiences. Essentially, though, it clings wearily in spirit to the original: It suffers from delusions of jazziness, but it's really deeply conventional.

Buzzing from flower to flower and hopping from bed to bed, Law's bad-boy Alfie is the original "He's just not that into you" guy -- at one point he announces that he rejected a woman because she had hair on her arms. He zips around on a sexy motorscooter, and favors trimly tailored European suits (bought on sale, naturally, because while Alfie has style to burn, he doesn't have a whole lot of dough).

Law gives us the world according to Alfie straight up, addressing the camera directly, the same device used in the original. We learn that as far as women go, men aren't really interested in much other than FBB (face, boobs, bum), and that married women are automatically needy, pathetic and unbearable ("There's one thing that puts me off marriage, it's married women"). Alfie will never commit, and we're meant to see how empty his life is. In case we miss the point, Shyer bludgeons us with obvious shots of city billboards that read "SEARCH," "DESIRE" and "WISH" in giant letters; at one point, the camera lingers, with syrupy portent, on the word "lost" in the poster for Bruce Weber's "Let's Get Lost" that hangs in Alfie's apartment.

Alfie gets his comeuppance, as he must, and because we know it's coming, we carry a puritan sense of foreboding with us through all of "Alfie" -- it spoils our fun as well as his. We're primed to thoroughly disapprove of Alfie's cluelessness and cruelty (and while much of what Alfie does could be considered benign if we're talking about consensual sexual relations between adults, his emotional cruelty to people who care about him is something else again).

But the movie invites us to revel in Alfie's stylishness, and then slaps us on the wrist for reveling in it a little too much. There's disreputable pleasure to be had in seeing the way Alfie, with that elf-mad gleam in his eye, is able to lure any woman he fancies into his bed -- yet we're supposed to melt as he stands outside the restaurant where the child of one of his many lady friends is having a birthday party, alone and forlorn and missing out on the pleasures of family. You see, this urban playboy really has heartland values -- he just doesn't know it yet.

If you can unsucker yourself from the gooey, messagey aspect of "Alfie" -- and ignore its stone-age presupposition that it's only men who play sexual games, while women are all just fragile, delicate flowers yearning to be loved -- the picture is actually, at times, good, shallow fun. Because to decry the objectification of human beings, you have to first objectify them, and if nothing else, "Alfie" pulls that off beautifully. The women in Alfie's sordid life include Jane Krakowski, whose killer figure is no match for her seductively long-lashed eyes; Marisa Tomei, who is, as always, outlandishly adorable; newcomer Sienna Miller, who looks and dresses something like the young Anita Pallenberg, but without either the elan or the teeth; Nia Long (a stunner to look at, and also capable of delivering lousy dialogue so it's infinitely believable) as the girlfriend of Alfie's best friend (Omar Epps); and the fiercely sexy Susan Sarandon, as the older woman Alfie dallies with. (Puzzlingly, Graydon Carter shows up in a cameo, as her sugar daddy. What, David Remnick wasn't available?)

If cinematographer Ashley Rowe ("Calendar Girls") makes the women in Alfie's life look like stone foxes, he lavishes just as much love on Law, and the sturdily handsome Epps gets plenty, too: This is equal-opportunity objectification, which is, after all, the lifeblood of movies as popular entertainment. Law is the movie's most fascinating object, if you can inure yourself to the way he mashes his lips together when he's trying to convey what passes, in Alfie's world, for being conscience-stricken.

But Law is more likable here -- and, when he's allowed to be naughty, more believable -- than in any other major role he's had. His Alfie isn't so much appraising (as Caine's was) as ingratiating: He knows we expect him to be a lout, so he plays the role to the hilt -- he'd never want to disappoint a lady, you see. Law is considered in some quarters to be devastatingly good-looking. Some people may even consider him sexy. In "Alfie," I think he's admirably specimen-like: His suits mold to his frame with sharp elegance -- in his pink shirts and almost-too-short jackets, he's a mod peacock. His hair stands up in dark-gold tufts, like that of a downy chick -- he looks, perpetually, as if he's just spilled out of a love nest.

Whatever appeal Law's Alfie has may be all surface. But I'd much rather watch Jude Law (a mediocre actor at best) scootering around Manhattan in his cool suits than sit through two hours of Paul Giamatti (a wonderful actor) schlepping around in saggy trousers and ill-fitting jackets, as he did in Alexander Payne's much-lauded "Sideways," playing a character who feels so much pity for himself that there's barely any room for ours. Both characters are lost men struck by the realization they're missing out on life -- the difference is that we're asked to feel pity for the misfit and moral superiority to the rapscallion-about-town. Neither pity nor moral superiority count as the deepest, most complex responses movies can bring out in us. And if we can't have complexity -- then good God, at least give us a great-looking suit.