The TV ad that put Bush over the top

An unscripted emotional encounter with the president, captured on camera, ends up a winner. 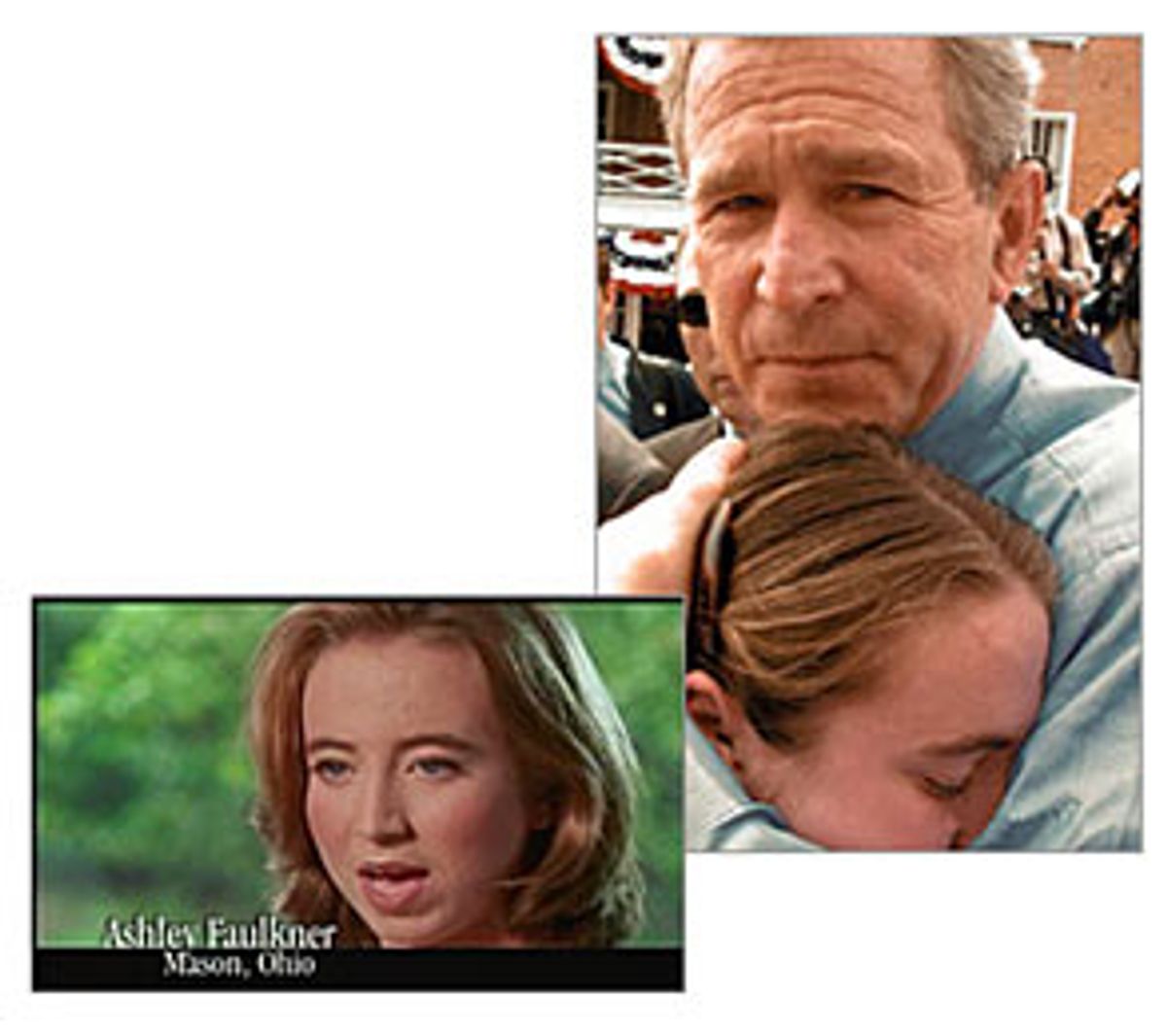 Karl Rove and his team of Republican operatives are accepting congratulations for engineering President Bush's reelection campaign. But there's another less likely Republican who deserves a lot of credit for the president's win: Lebanon, Ohio, resident Lynn Faulkner. Snapping one frame with his Kodak digital camera as Bush embraced Faulkner's daughter at a campaign rally last May, the father captured an emotional, unscripted moment that set in motion perhaps the most widely seen, and effective, television commercial of the 2004 campaign.

The unique, 60-second commercial that Faulkner's photo spawned, "Ashley's Story," blanketed swing states during the final weeks of the election. And in a campaign known for its negative tone -- often fueled by Bush's nasty, deceptive attack TV ads -- the commercial, with its heartfelt 9/11 connection, turned out to be an exception: a memorable, motivating, feel-good ad. Exit poll results that indicate "moral values" was a driving force among voters (22 percent of whom selected it as the most important issue in the election) help explain the effectiveness of the ad, which showed Bush as a protective, compassionate father figure. Additionally, voter surveys found that the issue of terrorism worked very well for Bush among married women with young children, who were the target demographic group of "Ashley's Story."

"The ad played directly to values and the security theme of the election, which judging by national polls, are the reasons Bush won the election," notes Darrell West, professor of political science at Brown University and an expert on campaign advertising. The commercial also included a strong religious subtext, casting Bush as a healer who literally saved Ashley from her despair; a theme that certainly resonated among religious voters who overwhelmingly supported Bush.

"Ashley's Story" arose from an unplanned encounter Bush had with Ashley Faulkner on May 4, when she; her father, Lynn; and neighbor Linda Prince attended a Bush campaign event in Lebanon, Ohio. Ashley's mother was killed during the attack on the World Trade Center towers, which she had visited on business. As Bush passed the Faulkners on the rope line, Prince said to him, "Mr. President, this young lady lost her mother in the World Trade Center."

Bush turned back, said a few words and gave the girl a big hug while Faulkner took a single picture. The photograph captured Bush with an unusually empathetic look on his face as Ashley buried her tearful face in his chest. That night Lynn Faulkner e-mailed the photo to a dozen family members and friends. Two days later the picture appeared in the Cincinnati Enquirer, and the story -- as well as the photo -- became an Internet phenomenon. By July, a production crew hired by the Progress for America Voter Fund, a Republican special-interest group, was filming the commercial at the Faulkners' home. The Bush campaign saved it for the end and released it in October.

As a narrator recounts the tale, Ashley appears on camera and says of Bush, "He's the most powerful man in the world, and all he wants to do is make sure I'm safe, that I'm OK." Her father, a self-described Republican, is also shown in the ad. As photos of Bush at ground zero appear, Faulkner says, "What I saw was what I want to see in the heart and soul of the man who sits in the highest elected office in our country."

"It was a very effective piece of political advertising because it was a personal story; it took a grand, ugly thing [terrorism] and put it in a context people can understand," says John Green, political scientist at the University of Akron in Ohio, a state that, not surprisingly, was inundated with campaign spots this year. "That picture of Bush with the little girl is very effective television. And it seemed like every time I turned on the TV I saw it."

That's because, unlike the many election ads that are created on the cheap and designed to generate free press coverage, rather than reach TV viewers, "Ashley's Story" was backed by the most expensive TV ad buy of the campaign, which blanketed nine states -- Ohio, Florida, Pennsylvania, Iowa, New Mexico, Nevada, Minnesota, Wisconsin and Missouri -- on both network and cable channels at a cost of $14.2 million. (The Progress for America Voter Fund's largest contributors are two California business executives, Alex Spanos and Dawn Arnall, who have given $5 million each. Home Depot founder Bernie Marcus chipped in $1 million specifically for the "Ashley's Story" ad.) The GOP fund's huge TV spending spree during the last three weeks of the election alone totaled $6.5 million more than the spending of all the Democratic independent groups put together, according to a new study by the Center for Public Integrity.

When it debuted in October, "Ashley's Story" didn't generate nearly as much buzz in the press as the controversial Bush-Cheney spot "Wolves," which hit the airwaves around the same time. That 30-second commercial, which used prowling wolves to symbolize looming terrorists, both questioned John Kerry's commitment to fighting terrorism and paid homage to President Reagan's famous 1984 campaign ad, which used a grizzly bear to symbolize America's then foreign adversary, the Soviet Union. (A check of the Nexis electronic database shows 143 stories since October that contain the key words "George Bush and wolves," compared with just 26 matches for "George Bush and Ashley Faulkner.")

Fortunately for Bush, no debate arose over the ethics of using a motherless child in a campaign commercial. In the past, grieving parents have occasionally filmed spots for candidates, often regarding crime and punishment issues. But rarely have children been used to talk about the death of a parent in the context, even indirectly, of presidential politics. "When I heard about the idea I thought there was a potential problem with exploitation," says Green. "But when I saw the ad -- the father involved in it was low-key -- I didn't have that feeling."

At nearly the same time that "Ashley's Story" was released, Democrats began airing their own ad featuring a 9/11 next of kin. New Jersey 9/11 widow Kristen Breitweiser, speaking into the camera, talked about Bush's opposition to the 9/11 commission. That ad appealed to voters' logic about the terrorist attacks, while "Ashley's Story" appealed to their emotions. "Kerry tried to reason with voters, while the Bush campaign understood this was a campaign about emotion," says Brown University's West.

Although the Kerry camp battled to match the Bush message machine ad for ad throughout the campaign, Democrats were never able to equal "Ashley's Story" -- they failed to produce the same type of compelling, thematic commercial that could help reveal something about their candidate's character. "Kerry had some really good attack ads on Bush and good positive ads about his own record. But I can't remember a heartwarming Kerry ad," says Green.

Recalling his daughter's encounter with Bush, Lynn Faulkner told the Cincinnati Enquirer last month, "That event was like a special little private gift to her." Ultimately, it proved to be a gift to the Bush campaign, too.