Give us your trees, your air, your crystal waters

Environmentalists say that four more years of Bush will turn even the red states black. 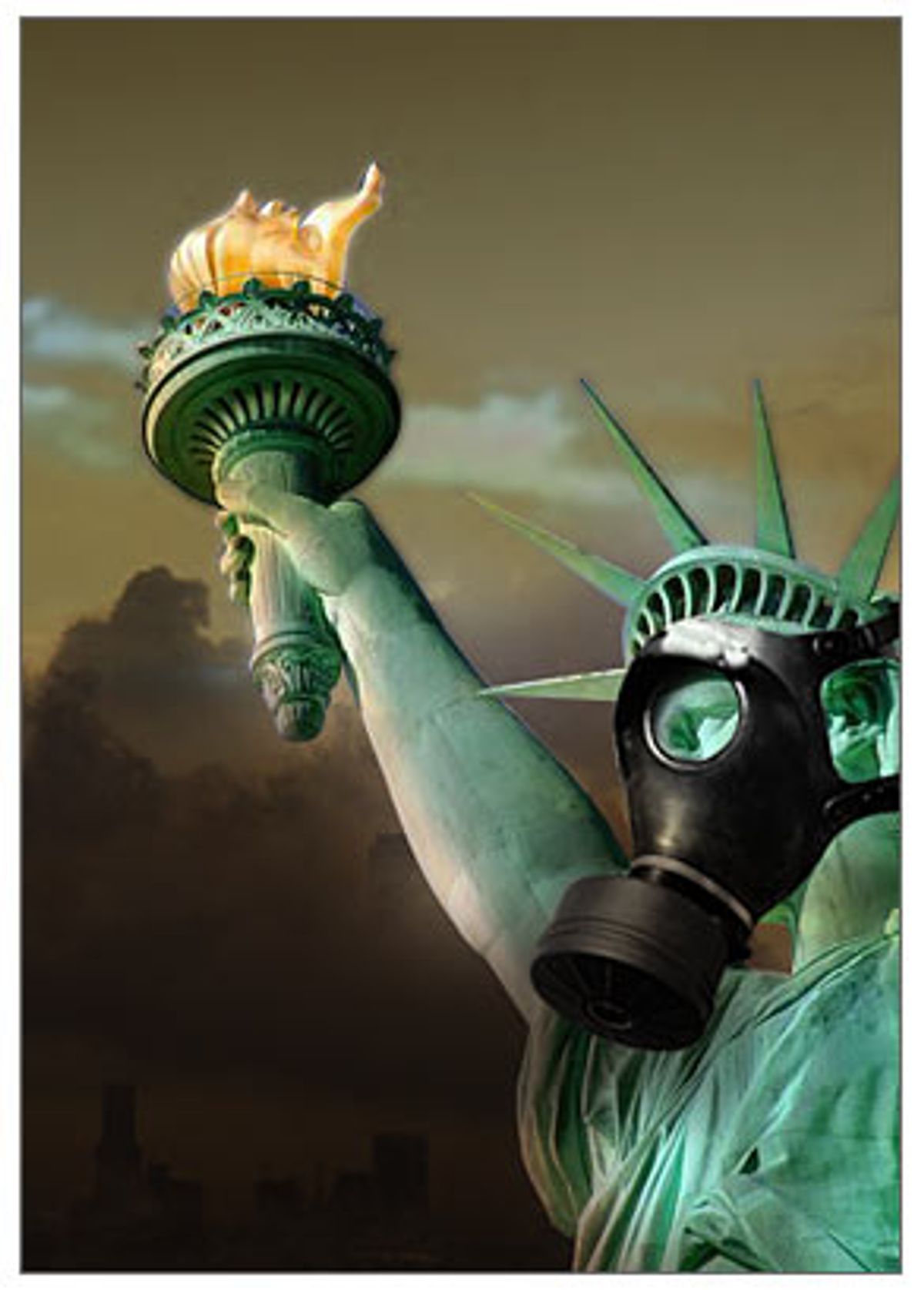 In his first four years in the White House, George W. Bush was accused of being the worst environmental president in American history by conservationists ranging from Al Gore to Robert F. Kennedy Jr. So what can we expect this self-proclaimed "good steward of the land" to do for an encore?

"I think it's pretty clear that a second Bush administration means lack of funding for environmental issues," says Betsy Loyless, vice president of policy for the League of Conservation Voters. "It means energy legislation that's dedicated to 19th century tenets. They may try drilling in the Arctic Refuge and perhaps change the Clean Air Act. It means more proposed drilling on public lands."

It also means environmental groups have lost the chance to get off the defensive after four years of pouring money, time and energy into staving off the president's slash-and-burn, pro-industry policies that masquerade under Orwellian names like "Clear Skies" and "Healthy Forests." After all, they had been looking forward to working with a new president with one of the consistently highest green ratings of any senator in the past two decades.

Even so, the election wasn't a referendum on the environment. Just over half of American voters may have been in sync with the president on moral values and security. But environmentalists argue that it would be a gross misreading of election results to assume that Bush speaks for the majority of the country when it comes to protecting their land, air and water.

"This election focused on just about everything but the environment," says Peter Rafle, a spokesman for the Wilderness Society. "War, foreign policy, security questions occupied people's minds, for better or worse."

With the race as close as it was, Brendan Bell, a spokesperson for the Sierra Club, says, "I don't think that we see this election as an endorsement of President Bush's environmental policies. And if the Bush administration believes that it is an endorsement, they're going to be in for a surprise."

At the state and local level, green issues faired well, even in the so-called red states. Voters nationwide approved $2.4 billion in funding for new open space, according to the Trust for Public Land, signing off on 111 of 147 land conservation measures -- a 76 percent passage rate, including in red states such as Florida and Virginia.

In Colorado, solid Bush country, voters approved a renewable energy portfolio standard, requiring that 10 percent of the state's electricity be derived from renewable energy sources like wind and solar by 2015. (In his first term, Bush fought the creation of such a standard at the federal level.) The Colorado law is the first time that voters have directly approved such a measure by ballot initiative. And in Montana, another red state, voters shot down a measure that would have relaxed restrictions on the use of cyanide by gold-mining firms.

It might seem like grasping at straws, but Montana's just-say-no vote to cyanide is one of many local green bills that buck up environmentalists. "In the presidential election, people talked about Iraq, the war on terror, jobs, the economy and cultural issues like gay marriage. But when voters got to vote on purely environmental issues, they often voted with the pro-environment vote," says Karen Wayland, legislative director of the Natural Resources Defense Council. So the president may be in for some big surprises if he expects Americans to roll over and embrace every pro-industry policy that he and his oil-and-gas men dish out in the next four years.

In the halls of the White House itself, environmentalists expect to see the Bush administration continue to hide the impacts of its energy policies: "We can expect more government secrecy, more suppression of basic scientific data, even efforts to deny citizens the basic right to appear in court to defend themselves and their communities against environmental assaults and dangers," says Carl Pope, executive director of the Sierra Club in a statement.

In fact, in the very week of Bush's reelection, new evidence of his administration's attempts to squash action on global warming surfaced. There's no sign that Bush in his second term will do anything but continue to ignore global warming, even though its potentially catastrophic effects are acknowledged by rest of the world, including the Queen of England!

"I think that it's exceedingly wishful thinking to believe that we would reverse course," says Joseph Romm, author of "The Hype About Hydrogen." "Unfortunately, I think we're going to lose this decade to inaction on global warming -- and it is a decade that we can't afford to lose. History is not going to judge this administration on the war in Iraq or terrorism or the deficit. History is going to judge this administration on global warming because historians are going to be living in a time when the climate is much worse than today, and possibly catastrophically so."

Many of the consequences of the actions that the Bush administration took in its first term will only begin to really be felt in the second, according to Pope from the Sierra Club. With Superfund bankrupt, toxic waste dumps won't be cleaned up. And plots on public lands that have been leased for drilling will start to see the invasion of heavy machinery. "There will be real consequences on the ground from what they've done," he said.

For enviros trying to hold Bush's polices at bay, one of the first legislative battles they anticipate is a new version of the old energy bill. First launched in 2001, it has since languished and died in Congress but will likely come back like a coal-and-toxin zombie that can't be killed.

"The energy bill would make global warming worse because it would build more coal-fired power plants, as it fails to invest in renewable energy," says Bell from the Sierra Club. "It doesn't place caps on our global warming emissions. It basically ignores the issue and it doesn't take the single biggest step to curbing global warming, which is raising fuel-economy standards. It takes us in the wrong direction."

While the Republican tilt of the new Senate would appear to make the environmental battle even tougher than it was during Bush's first term, it's not a lost cause. Bell points out that a number of the Democrats who lost their seats in the Senate this year, like Sen. Tom Daschle and Sen. Zell Miller, didn't support the filibuster that most recently killed the energy bill in the Senate. And a number of moderate Republicans, like McCain, crossed the aisle to do so.

"We still feel that we can keep this bad energy bill from becoming law. But I think that the Republicans will go back and try to put more and more provisions in there for the coal industry, the oil industry and the utilities industry," says Bell. "And they'll probably try to push forward to drill in the Arctic National Wildlife Refuge."

Some Republican senators are already talking about introducing Arctic drilling into a budget bill in February or March, which only requires a simple majority to pass.

But conservationists -- and the public -- likely won't give it up easily. "There is widespread support for keeping the Arctic Refuge wild, unspoiled and free of oil rigs," says Wayland from the Natural Resources Defense Council. "I think that if they had the election, and then all of a sudden they held a vote to open the Arctic, there would be a lot of public outcry." Even so, she adds, "we're just going to be vigilant."

Wayland thinks its likely that Bush will immediately try to open up more public lands for natural gas drilling, since we're moving into the winter with high natural gas prices. She also anticipates further legislative attacks on the Endangered Species Act -- which gets in the way of development -- as well as the return of Bush's "Clear Skies" initiative, which would actually weaken the requirements under the Clean Air Act for eradicating mercury pollution from coal-fired power plants.

Environmental groups hope to reach out to sportsmen who in Bush's first term proved to be the kind of conservationists that Bush did listen to -- sometimes. Just before the election, due to an unprecedented outcry from people of all political stripes in Montana and Wyoming, the administration roped in plans to drill in the Montana's Rocky Mountain Front. "There's increased recognition that even in the Republicans' own base, there is opposition to unrestricted oil and gas drilling and rolling back environmental protections," says Wayland.

With Republicans, now four men stronger in the Senate, firmly in command of the national stage, environmentalists plan to take the fight to states and local regions. On global warming, while the U.S. has sat out climate talks, California and a number of Northeastern states have taken action into their own hands. California has pledged to cut greenhouse gas emissions from cars and trucks by 30 percent in the next decade. And next summer San Francisco and Oakland, under the auspices of the U.N., will host a five-day green city symposium with leaders 100 of the largest cities in the world to try to move the issue forward.

"If you can't get the job done at the international level because nation states like the U.S. are recalcitrant, then there is a kind of urban revolution that could get the job done," says Randy Hayes, director of sustainability for the city of Oakland, who is the founder of Rainforest Action Network.

Besides battling at state and local levels, environmental groups urge voters who care about the environment to put pressure on their national representatives. "If they don't hear from the majority of Americans who want stronger environmental protections, how can we blame them for misinterpreting the will of the people?" says Rafle from the Wilderness Society.

If you're worried about Bush pushing forward his rapacious, anti-environmental agenda, says Wayland, whatever you do, don't flee the country. "Don't move to Canada," she says. "Move to the Southeast. Move to North Carolina, South Carolina. Move to Georgia." Fight for the environment at home. "Now is the time to be more activist and recruit more of your friends. This is a call to action."

Michael Brune, executive director of Rainforest Action Network, agrees. "The opposing team just scored a touchdown and did a nasty offensive dance in the end zone. But we haven't lost the game."