Did this man cost the Democrats the election?

Whether or not the gay-marriage backlash helped put Bush in the White House, now is the time to remind ourselves what the Democratic Party really stands for. 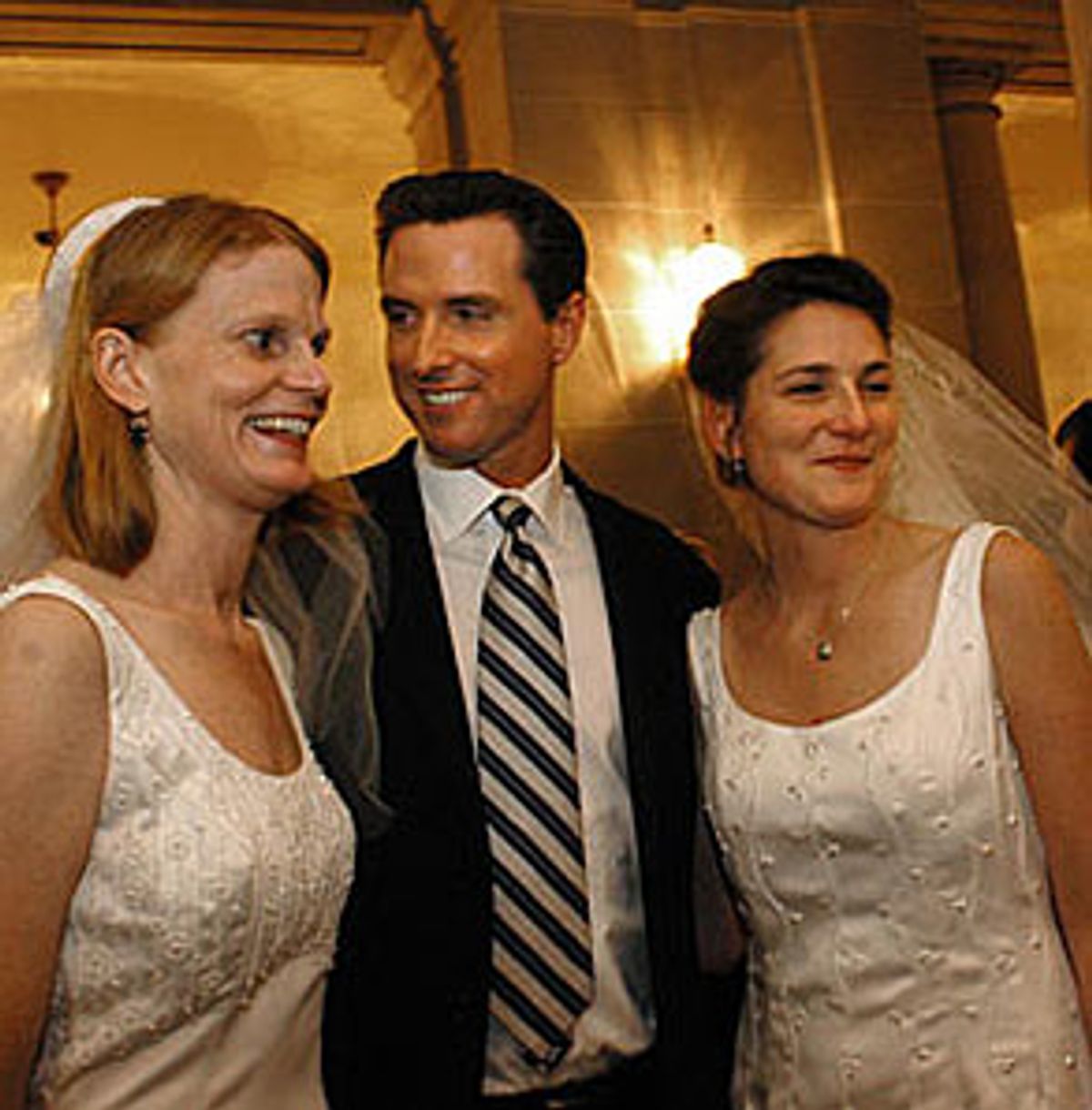 My daughter is still wearing her big blue Kerry/Edwards button to school and telling everyone who'll listen how awful it was that we reelected President Bush. Those aren't exactly fighting words here in true blue San Francisco. But because she goes to a Catholic high school there's more diversity of opinion than you might expect. (Which is part of why we sent her there.)

But the hardest thing for her to accept on Wednesday wasn't the crowing of her Republican classmates, it was the ire of young Democrats telling her that gay marriage cost John Kerry the election. "Mom, how can people who support marriage oppose gay marriage?" she asked me, genuinely pained and confused. I didn't have the heart to tell her that during the dark hours of Election Night I had the same thought about gay marriage dooming Kerry.

In the light of the next day, though, I came to my senses. Putting the blame on gays and lesbians goes against our own core values. We can't sell our souls to take back the White House.

Some liberal Salon readers haven't seen that way. "Gay marriage is the Ralph Nader of 2004," one wrote yesterday. A friend was meaner, telling me my mayor, Gavin Newsom, is the new Nader because his decision to marry local gay couples last February, which caused a national sensation, unleashed a red-state backlash. California Sen. Dianne Feinstein, always fairly conservative on cultural issues, criticized Newsom for his gay-marriage gambit on Wednesday: "I believe it did energize a very conservative vote. The whole issue has beeen too much, too fast, too soon."

When I reached Newsom by phone on Thursday, he tried to joke off the criticism. "Hey, I'm responsible for the end of the free world," he said. "It's amazing -- for those who believe one person can't make a difference, look at me." But he sounded battered and tired, and admitted it. "When you defend yourself 400 times, you get defensive. You should see the stack of phone messages I have here. It hurts to be criticized by my party. But this issue began long before I even took office."

Newsom said it was the November 2003 ruling by the Massachusetts Supreme Court -- declaring that its state Constitution sanctioned gay marriage and not merely civil unions -- that put the issue on the map. Colorado Rep. Marilyn Musgrave then jumpstarted the backlash with a constitutional amendment to ban gay marriage. "So there were already plenty of promises by Bush and his administration that this would be a major issue in their campaign," he said.

I know a lot of liberals are feeling lonely this week. But I'm having an especially hard time because I have a lot of innate sympathy for cultural conservatives. I'm a working-class Irish Catholic -- as is Newsom, incidentally -- who moved away from the church because of its stands on women's issues. Yet all my lefty values come from Catholicism and I still miss it. I went to high school and college in Wisconsin, which went for Kerry but just barely (thanks, Bruce!) and I will never write off the heartland. While I still think of myself firmly on the left, I'm politically pro-choice but personally anti-abortion. I was behind much of Bill Clinton's 1996 welfare reform and I oppose identity politics. And until Newsom went on his marrying spree, I thought Democrats needed to move very slowly on gay marriage.

Then I had friends and neighbors who got married -- and a few whose weddings got canceled when the California Supreme Court stopped the ceremonies in March -- and my worldview permanently shifted. Now I don't know how the party can turn its back on gay people who want to marry.

In the 1960s, the Kennedys moved cautiously on civil rights -- too cautiously, history would show -- and still were despised by Southern racists who wanted absolutism. In 1965, Texan Lyndon Johnson knew he handed the South to Republicans when he signed the Civil Rights Act. But is anyone prepared to argue today that he did the wrong thing? Maybe the South would still be Democratic but Barack Obama wouldn't be. And neither would I.

Even Newsom admits to some post-election soul-searching. To say he cost Kerry the election "is quite simplistic," he said. "But I'll live with the burden of never knowing," he conceded. He argued, maybe self-servingly, that one could make the case that he helped Kerry by deflecting attention from the Massachusetts liberal, whose state legalized gay marriage. "When we were in Boston this summer, you didn't see photos of gay couples getting married there," Newsom said. "All those images were exploited months earlier in San Francisco. We took the focus away from Massachusetts. And now, even the president all but supports civil unions. Dick Cheney supports civil unions. We moved the debate."

Kerry, by the way, supported civil unions but not marriage, although that didn't help him with culturally conservative voters. Personally, I have to wonder if red state folks who voted for Bush on moral issues saw through the ruse: We're the party of civil rights for everybody except gay people? Please. One thing Bush clearly had over Kerry was the perception that, right or wrong, he stands by his values. I really do think "character" is a huge part of the values package that allowed Bush to win. As Newsom himself stressed, if Democrats were forced to adopt the Republican Party line on "abortion, stem cells, all these values issues -- if we have to become the party where everybody carries guns to church -- then why not just jump ship? This isn't the party I grew up with. And I think voters will see through it. People only support someone they trust."

So I guess I'm a little bit red and a little bit blue and that's why I'm feeling purple and bruised this week. But I believe I'm the future and I know my daughter is. Young people overwhelmingly support gay rights and they're starting to vote in greater numbers, too. The hand-wringing and reflexive kick-the-young'uns that's been evident on some blogs (I love you all over at Daily Kos, but that was some ugly youth-bashing Tuesday night) is pointless. Even with Karl Rove and the GOP using gay marriage as a wedge issue, Kerry won 49 percent of the vote. Lefty Democrats can lick their wounds for another day or so. But then they have to get back to work and extend the successes of MoveOn, ACT, Declare Yourself and the labor unions, and continue to build a party that knows how to mobilize its voters, especially its young ones.

Most of whom, even in my daughter's Catholic school, supported Kerry. In fact, on Wednesday morning, during a time when the kids can offer prayers or "special intentions" (for the pagans and half-Jewish kids like my daughter), most of her classmates prayed for Kerry. It's a blue-state apostasy, I know, but I don't get what's wrong with a moment of silence in schools, for prayer or anything else. If I were an atheist I'd tell my child to take deep breaths and enjoy the quiet. As Barack Obama says, we pray in the blue states. And of course the Cheneys love their gay daughter in red Wyoming.

I believe we'll survive four more Bush years and recover the White House. But we won't do it by selling out gay people.