The curse of Bush II

Yes, the devastation will be extreme. The good news? He'll sow his own destruction. 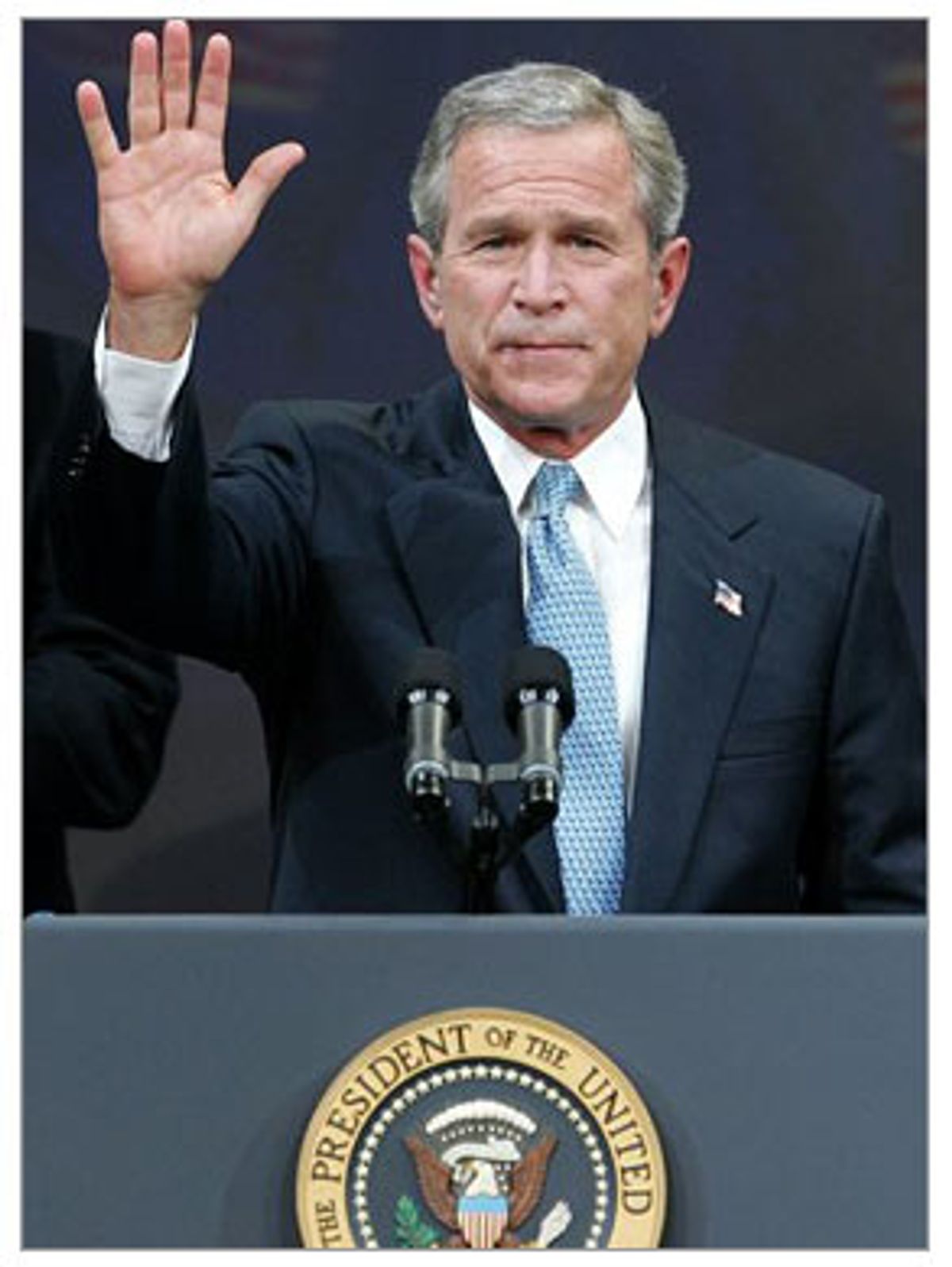 At some point in the next four years there will be a great scandal that will make Watergate look like a fraternity prank. All the elements are already in place.

During its first term, the Bush administration took the approach that its policies were divinely inspired and above reproach even though George W. Bush had lost the popular vote in 2000 by over half a million votes. During the current election administration officials began to crow about Bush's having received more votes than any other president in history before the polls had closed. The fact that his opponent got the second highest number of votes of any candidate ever won't slow the incumbent down for a moment.

In his acceptance speech, Bush spoke of his "duty to serve all Americans." Vice President Cheney, however, noted that Bush ran on a clear agenda and the nation responded by giving him a mandate. Therefore Bush's statement that "a new term is a new opportunity to reach out to the whole nation" will last as long as the echo of those words did in the auditorium where he gave his victory speech. At one of his rare press conferences, a day later, Bush said: "I've earned capital in this election, and I'm going to spend it." It's clear Bush and Cheney see this mandate and their moral certainty as all they need to justify anything they do.

That mandate will be used to return to business as usual: using the resources of government to serve the core Republican constituencies and to enrich those in power politically and economically. More money will be funneled to the religious right and favored defense contractors. Forty percent of the Pentagon's budget already goes to Halliburton and other companies in no-bid contracts, and that percentage will increase as social programs are cut to spend more on the military.

Bush stressed in his speech that reforming the tax code and Social Security are his priorities for the next term for a reason. Shifting even more of the tax burden to the middle class is a way to reward the wealthy for their support. And better yet, it comes with no political cost, since Bush's moral masses apparently worry more about the sanctity of life in a petri dish than their economic self-interest. Privatizing Social Security will generate billions in commissions for the financial services industry. And a portion of those profits will be faithfully recycled as campaign contributions to those who made the windfall possible.

Subjecting people's retirement income to the vagaries of the marketplace will pale in comparison to subjecting people's freedoms to the vagaries of the government's security apparatus. Six months ago the Justice Department was arguing that Yaser Hamdi, who was born an American citizen, was so dangerous that he should be denied every one of his most basic civil liberties. When the Supreme Court said even Hamdi deserved his day in court, Justice shipped him back to Saudi Arabia and gave him his freedom rather than go before a judge to argue that someone who at best was a Taliban foot soldier was a grave threat to the republic.

But any abuse is permissible if the administration decrees someone an enemy of the state because we are at war -- and we will be at war until Bush decrees otherwise. According to the White House's lawyers, the Geneva Conventions and other laws of war do not apply. Any obligation, be it law or international treaty, can be ignored if it is inconvenient. Torture can be outsourced and, even when done by Americans, is permissible as long as the intent is not to murder. Since the intent of torture is to extract information, murder is never the goal, and so the circular logic winds up back where it wanted to be. The ends justify any means and the ends can be defined to be whatever is most convenient for the government.

Perhaps the most disturbing aspect of the coming scandal, whether financial or merely moral, is that it may well go undetected and unreported. With solid majorities in both houses, a partisan Republican Congress will cease to provide a check or balance on the power of the executive branch. To call the Republicans in Congress the lap dogs of the White House is to insult Chihuahuas everywhere -- they at least bark on occasion. It is no surprise that Bush has been the first president since the earliest days of the republic not to use his veto power. With ethically challenged Majority Leader Tom DeLay having an even larger majority in the House, there will be no challenge to the administration from that quarter.

Normally the judiciary could be counted upon to play its constitutional role and provide some brake on abuse of power by the White House. We are, however, only a couple of nominees away from an Antonin Scalia-Clarence Thomas majority that believes in the unchecked power of the executive branch.

Given that the administration is so assured of its own virtue and correctness, it sees no need to share what it is doing with the American public. As a report by Rep. Henry Waxman, D-Calif., recently pointed out, the administration has waged an unprecedented assault on the public's right to know. By restricting access to information and vastly expanding what is being classified, the administration has choked off public oversight of what the government is up to.

Some might think that whistleblowers will come forward and provide the information the public needs to know. They will only if they have a particularly strong desire to commit career suicide. FBI whistleblowers have been sent off to bureaucratic Siberias. And for those who can't be assaulted directly, there are other tactics, like attacking the person's family. When retired Ambassador Joseph Wilson pointed out that Bush was using a report, known to be false, that Iraq had sought to acquire uranium from Niger, the administration attempted to discredit him. When that didn't work it thought nothing of damaging national security by revealing that his wife, Valerie Plame, was an undercover CIA employee.

Another Pentagon leak that has not been clarified is how its erstwhile favorite Iraqi exile, Ahmed Chalabi, learned the United States had broken Iran's diplomatic codes. He is said to have passed this information on to Iran in order to ingratiate himself to another patron.

Even when a leaker is identified, the damage done might never be made clear. A.Q. Khan, the Pakistani who helped his country develop nuclear weapons, admitted on television that he provided nuclear-related information to other countries. Bush claimed to have brought him to heel as an accomplishment of his war on terror. But Khan was pardoned immediately by Pakistani President Musharraf; he has been under house arrest and kept away from the press ever since.

The White House knows the press will drop most stories after a couple of news cycles with nothing new and that stalling can stave off any lasting embarrassment. At most a couple of small fish wind up taking the fall -- as has happened in the case of the prisoner abuse at Abu Ghraib. Apparently staff sergeants are the highest-ranking responsible officials in our armed forces.

Can the Washington press corps be depended upon to uncover any further administration wrongdoing? Bob Woodward and Carl Bernstein used the Watergate scandal to vault from obscure reporters to media stars. Today's media, however, are largely either compromised or cowed. Corporate interests dictate what Fox News portrays as fair and balanced, which is why its viewers are far less well informed than those of competing networks. But it would be as much a mistake to think that people use the media to inform themselves as it would be to think that the media only seek to present the truth. The bottom line drives the latter effort. And many readers, viewers and listeners would rather have their worldview validated than be presented with conflicting information.

What's more, never tiring of screaming about the liberal bias of the press, the right has successfully beaten much of it into submission. And the right sees no inconsistency in using its domination of talk radio, cable television and pathetically predictable print outlets like the Wall Street Journal, Rupert Murdoch's tabloids and the Washington Times to do it. The press is now so timid that investigative reporting takes a back seat to providing an echo chamber for administration spokesmen in the name of balance.

And while its foreign policy has been a failure of monumental magnitude, the administration has been relentlessly successful at filling the airwaves with its alternative version of reality. When the New York Times reported that 380 tons of specialized high explosives, one pound of which was used to bring down Pan Am 103, had been left to be looted in the aftermath of the invasion of Iraq, the reaction by the administration's surrogates in the press was to attack. They said it was a liberal media October surprise and that Saddam Hussein or maybe the Russians had moved the explosives before the war. The Pentagon trotted out a couple of middle-grade officers to fill the air with smoke and claim they had not seen the explosives or had detonated several tons of them. That neither officer knew anything about the disposition of the 380 tons in question was irrelevant, as the press felt obliged in the interests of balance to aid in the obfuscation. By the time a Minnesota television station came up with videotape showing that the explosives were still under International Atomic Energy Agency seals after American troops had arrived, that incontrovertible proof was lost in the haze. So don't look to the press to provide clarity or truth about the coming scandals.

If there is any silver lining, it is that zealots without constraints will eventually hang themselves on their own excesses. While you can fool most of the people twice, you can't do it forever. This administration loves to talk about Saddam's mass graves even though the most recent ones date from the mid-1990s. They never mention the estimated 100,000 Iraqis, half of them women and children, who have been killed while being liberated. But parallel realties can be constructed and maintained for only so long.

Eventually more people will realize that the Republican morality has no more depth than Bush's intellectual curiosity. Then new ayatollahs will spring up and try to claim the mantle of the demolished majority, but they will also fail. Eventually the people will figure out that taxes are the price we pay for a safe and just society and that morality, like democracy, has to spring from within rather than be imposed from above.