The freewheeling network of Web sites has a history of clashing with authority. But usually it knows who is trying to shut it up. 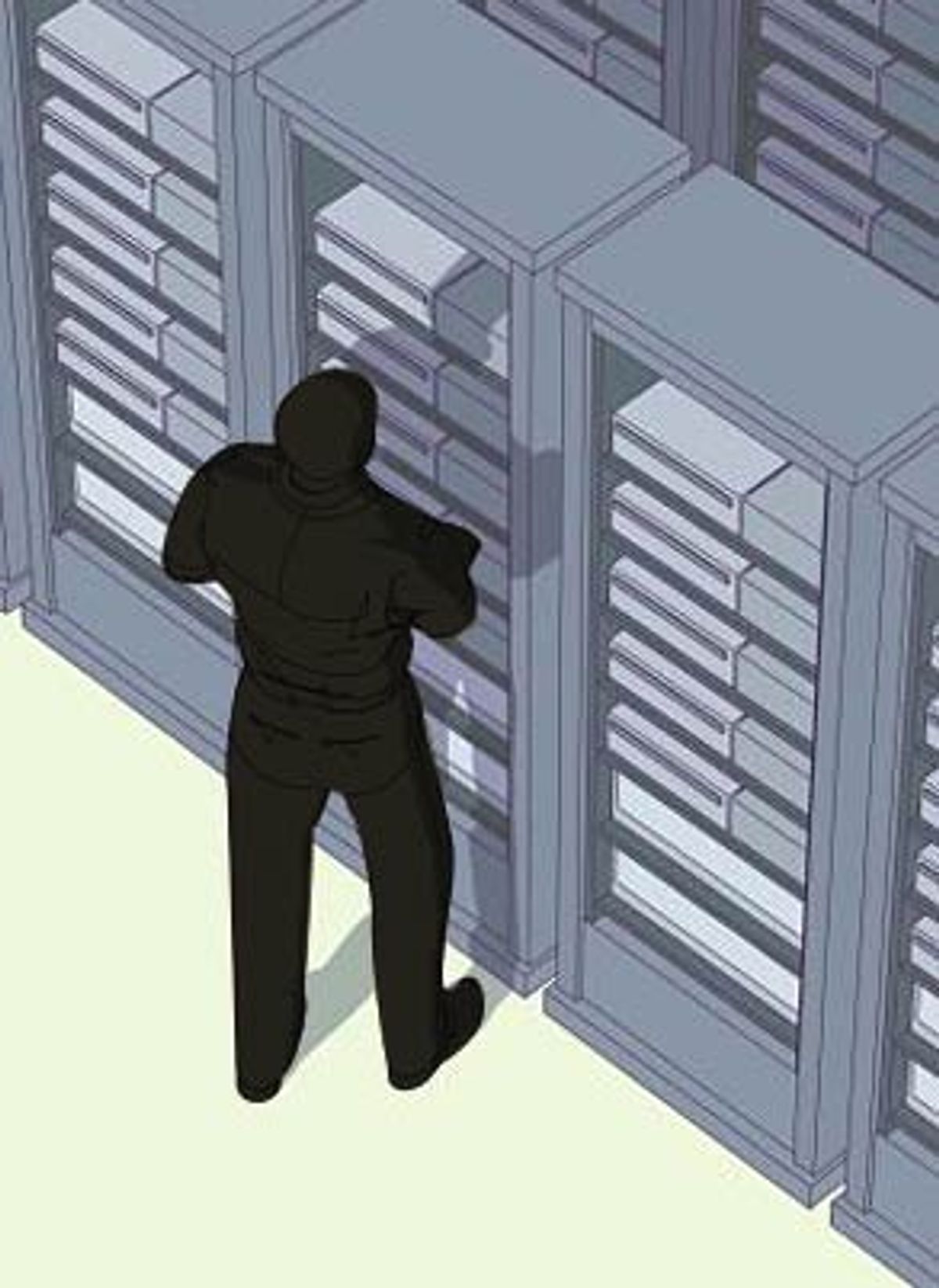 Hep Sano is remarkably calm. Sipping an iced tea at a brewpub in San Francisco's Haight-Ashbury, she dispassionately recounts Indymedia's alarming situation -- the unexplained seizure of two of the media organization's computers by an unknown government at the behest of the FBI.

"We want to set a precedent," says Sano. "The damage has been done to us. But we're hoping to get something that says, no, the FBI was wrong. You can't just go in and take a server in another country for unknown reasons without saying who did it."

The facts of the matter are scanty. On Oct. 7, Rackspace Managed Hosting, an Internet service provider based in San Antonio, was served with a subpoena ordering it to hand over two Indymedia servers physically located in London. Rackspace immediately fired off an e-mail to Indymedia informing them about the servers and noting that it was required to comply, according to something called the Mutual Legal Assistance Treaty, an international agreement that sets out "procedures for countries to assist each other in investigations such as international terrorism, kidnapping, and money laundering."

In the e-mail, Rackspace noted that it was "acting as a good corporate citizen and is cooperating with international law enforcement authorities. The court prohibits Rackspace from commenting further on this matter."

And that was that. Rackspace refused to provide a copy of the seizure order to Indymedia. Noting that it was under a federal gag order, it refused to even discuss the contents of the order. Indymedia was left wondering which government seized its servers and for what purpose. To this day, the group has no idea what was done to the servers before they were returned, what was being searched for, who did the searching, or why. All they know is that for nearly a week somebody, somewhere, with the assistance of the FBI, had a peek, and maybe more, at their machines.

This kind of thing doesn't happen to Wolf Blitzer.

Indymedia, also known as the Independent Media Center, is a pain in the establishment ass. It doesn't fit neatly into the box of either journalism or activism. Frequently cited and dismissed by the mainstream media as irresponsible, it also boasts a string of legal victories giving it important media protections. It consistently pushes the bleeding edge of what can be published, and for that, it has landed in hot water again and again.

The promise of Indymedia is that anyone can be a reporter. Forget journalism schools or internships at hifalutin intellectual magazines. Indymedia is more or less dedicated to the same promise as Fox News (minus daily memos from Roger Ailes): We report, you decide.

But the "we" in Indymedia's case is inclusive of everyone, everywhere. The idea is that the mainstream media isn't telling the whole story, and so the public has to pick up the slack. Or, as Sano puts it, "Who really knows what's going on in a neighborhood better than the people who live there?"

Like so many other progressive and activist organizations, Indymedia had its genesis in the 1999 World Trade Organization protests in Seattle, where freelance journalists and activists came together to form a new media organization that aimed to broadcast a message they didn't feel the mainstream media was covering. They wanted to present a different picture of the WTO than the one typically portrayed in the press. They wanted something new, something that wasn't organized from the top down in a hierarchical manner. And before the protests had ended, IMC was born.

Over the years, IMC has grown to include cities all over the world, with more than 100 centers in all. There's no barrier to entry. Once approved, anyone who abides by the New Independent Media Center principles can form their own branch. In the years following the Seattle protests, IMC branches have opened from Europe to Uruguay. But true to its riotous roots, IMC has consistently pushed the limits of acceptable practice.

Which is perhaps why Sano remains sanguine. Trouble with the law is a regular occurrence for Indymedia.

In 2001, following the FTAA protests in Quebec City, the FBI and Secret Service subpoenaed the IMC to supply the FBI with user logs from an Indymedia Web server. Indymedia won that fight, and it subsequently ceased logging identifying data for visitors and posters to its sites.

In 2003, Indymedia made a splash when it took up the cause of the Diebold memos. After a group of Swarthmore students obtained and published embarrassing internal memos from Diebold concerning that company's electronic voting machines, Indymedia hosted a copy of the memos on its servers. Diebold claimed that Indymedia had violated its copyrights and tried to use the Digital Millennium Copyright Act to bludgeon it into submission. The Electronic Frontier Foundation, or EFF, provided legal representation to the maverick media outlet. It won not only the case but, on Oct. 14, a $125,000 decision against Diebold as well.

More recently, in August 2004, Indymedia found itself in the midst of a controversy surrounding its coverage of the Republican National Convention. Prior to the convention, a poster to nyc.indymedia.org published the names of about 1,600 convention delegates coming to New York, along with their e-mail addresses, phone numbers, home addresses and a list of hotels where they would be staying. The Secret Service subpoenaed NYC Indymedia's Internet service provider to try to obtain information that would identify the poster, but as a result of the Quebec case, Indymedia no longer kept such logs.

Then, on Oct. 1, the FBI paid a visit to an Indymedia representative in Seattle on behalf of the Swiss government. The Swiss were upset that IMC had published pictures of undercover agents posing as anti-globalization protesters. The pictures, though published by IMC Nantes, were physically located on the server in Seattle. Prior to the FBI's visit, IMC had already digitally masked the agents' faces. Since no names or other information was published, this effectively killed the Swiss government's argument that the pictures contained personally identifiable information. During this meeting, according to the EFF, the FBI conceded "that they were not contending any laws had been broken, and that there was nothing wrong with the photos of the officers, but were rather passing on a request from the Swiss government." Again, Indymedia won.

But there's one important distinction between the current case and all previous clashes with authority. In the past, at least, Indymedia always knew whom it was fighting.

"ISPs are not allowed to disclose stored data to the government without a specific court order," says Annalee Newitz, spokesperson for the EFF, which is again representing Indymedia. "The lawyers are jumping up and down saying, 'Sue! Sue!' But we don't know yet who to sue."

Kurt Opsahl, who is wrangling the legal end of the case for the EFF, concurs. "So far it has been just a brick wall," says Opsahl. "There are similarities to some of the PATRIOT Act powers through which the U.S. can issue secret orders to obtain evidence. But in those cases the service provider wouldn't even be allowed to say they had received the order. So it is extraordinarily unusual to say that [Rackspace] had gotten a court order, but to not be able to say who requested it or any of the other pertinent information."

"There's also a similarity between this and the notorious Steve Jackson Games case. In that case the Secret Service came in and seized a computer that was hosting some [bulletin board system] because they had an interest in a particular posting on those boards. The EFF was able to go to the court and show that the court can't go in and seize protected speech in its interest in just one posting. It appears that the government has forgotten that lesson, and we may need to remind them of it again."

Opsahl is optimistic about his chances of winning a decision for Indymedia. "The Electronics Communications Privacy Act sets restrictions on when an ISP can provide the content of communications. The Privacy Protection Act prohibits the government from seizing a server that contains a journalist's work product or documentary information that is to be published in the news media."

When Salon contacted Rackspace, the company offered apologies but no information. Rackspace spokesperson Annalie Drusch, while apologizing profusely for her inability to comment, told Salon that "all I can tell you is that we responded to a subpoena."

Nor was the agency that served the subpoena much help.

"Much as Indymedia would like for it to be, this is not an FBI case. This was a request from a third country pursuant to an MLAT subpoena," said Joe Parris, a spokesperson for the agency, referring to the Mutual Legal Assistance Treaty. "It is not a U.S. case. The FBI, the Department of Justice, are not parties in interest. We just fulfilled the U.S. end of an MLAT treaty on serving the subpoena."

Parris went on, however, to offer a tantalizing nugget.

"I think that the Indymedia site is claiming that it had something to do with them publishing pictures of undercover police officers, but I've heard through other media sources that it was coming from Italy. But that's not from an internal FBI source."

Both the EFF and Indymedia are now focusing on Italy. Suspicions center on Morena Plazzi, a deputy public prosecutor of the court of Bologna. IMC Italy reported that Plazzi stated in a press conference that she had subpoenaed the servers' user logs. (Which, again, Indymedia doesn't keep a record of.) Salon's attempts to reach Plazzi were unsuccessful.

"At this point we don't have a whole lot of information," Opsahl says. "But we do have what appears to be somebody admitting that they had asked for log information. So that is now becoming the prime suspect."

To that end, the EFF filed a motion on Oct. 22 to unseal the court order that subpoenaed the servers and discover who actually issued it. Meanwhile, in the United Kingdom, where the servers were seized, there's been considerably more uproar over the seizure. M.P. Richard Allan, a Liberal Democrat, has been pressing the U.K. Home Office to determine what that government's involvement, if any, was, and has been posting the results of his inquiries on his blog.

"I believe it was something to do with the G8 protests in Genoa," Sano says. "They were very violent. Several Indymedia reporters were caught up in that. One of them was severely beaten and is currently pursuing a case regarding that."

Regardless of the cause, the seizure, at least temporarily, effectively silenced several media outlets. And that, says Julien Pain of Reporters Without Borders, is intolerable.

"We really find this FBI intervention unacceptable," Pain says. "They'd never have done that for another media. It shows that Internet publications, and especially Indymedia, are not considered media. They see the Internet as a jungle, where they can do whatever they want."

"The worst part is for Uruguay," Sano says, explaining that IMC Uruguay also kept its data on the London servers, and was preparing for a presidential election of its own. "They have a huge history of violent media repression in Uruguay, even after they achieved democracy. They have no backups. And the reason they were being hosted outside the country was specifically to avoid the kind of seizure that ended up occurring."

Mathew Honan is a San Francisco-based freelance writer. His work has appeared in Mother Jones, The National Journal Technology Daily, and Macworld magazine.