The Founders would be appalled at the Bush administration's shameless religious exhibitionism. 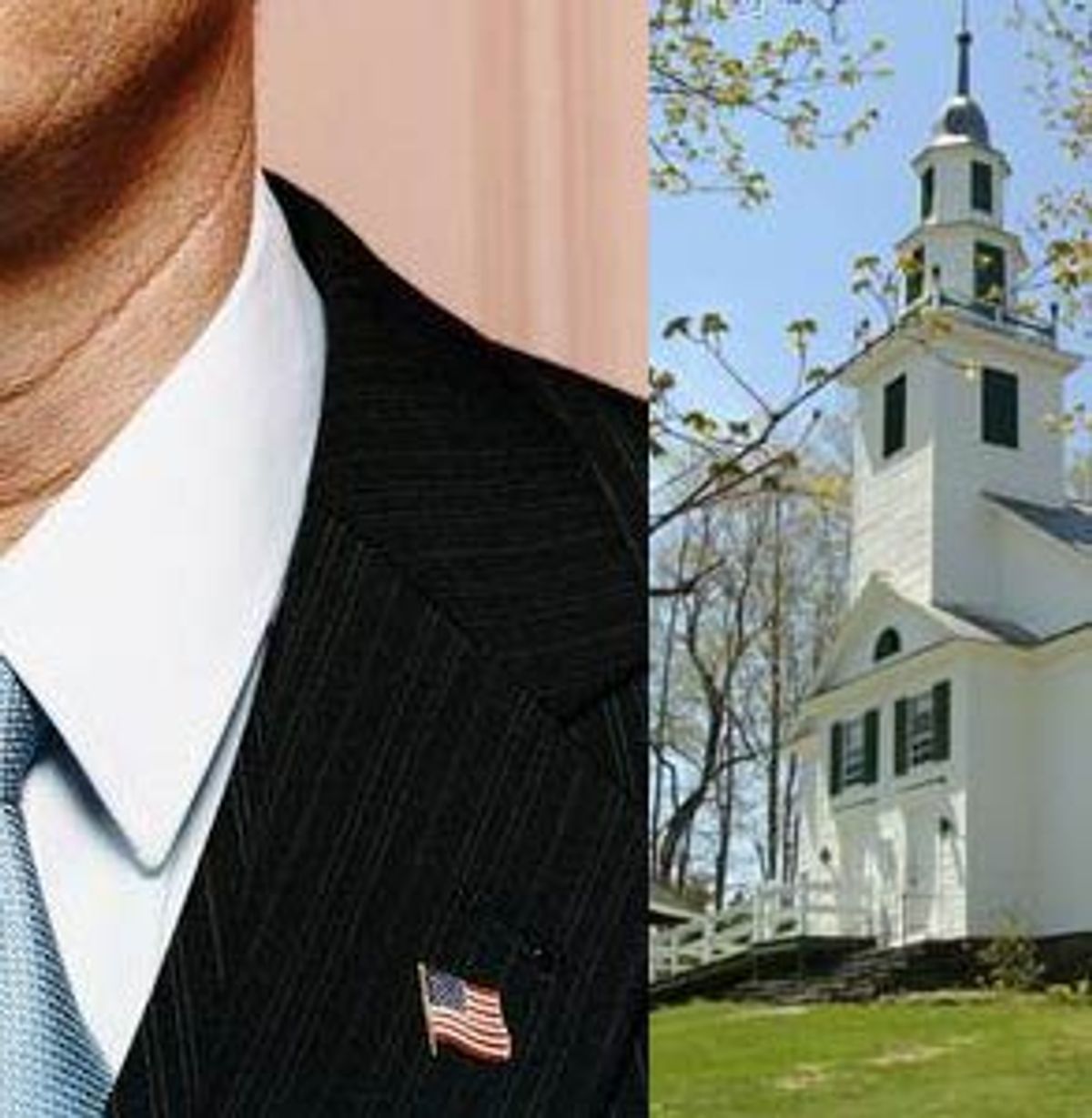 The witch doctors are shaking their rattles and howling their incantations at the Democrats. It's an affliction borne by any losing party in any post-election season. But their counsel this time is of a special oddity. They're telling this year's losers that they must get right with God.

The question, as usual, is, which God -- or whose? My own religious heritage is Southern, Protestant and biblical, so that by all rights I ought to qualify as an expert on the "evangelicals" who are said to have rallied in the millions to quell the menace of gay wedlock and to reelect God's anointed man, George W. Bush, and who are even boasting about it. I hasten to add, however, that in my case the overlap ends abruptly with the three qualifications cited above. I am of that allegedly milquetoast tribe of people who still worship from the Book of Common Prayer, where qualifying phrases such as "those who profess and call themselves Christians" (not, mind you, "who are...") and "we have erred and strayed from thy ways like lost sheep" abound. Such locutions do not encourage sinners to imagine themselves spiritually superior to others.

I have no idea what Bush's deepest religious convictions are. But to judge by his policies they're far more literalist than Anglican -- and far removed from the tolerant spirituality of his family heritage. His policies on stem-cell research, pushed to their logical conclusion, would make unlawful heresy of (male) adolescent masturbation; and his demagogy on the gay-marriage issue points unmistakably to a world in which the tribal dietary and sexual fetishes of the Old Testament are taken as literally as last week's newspaper headlines. In the light of his recent triumph, I expect to read that the Democrats have missed the bus and must ape the sentiments and superstitions that constitute Bush's base in the Southern and Midwestern heartland.

Somewhere along the way Bush swapped his hereditary spirituality for the stronger medicine of the Western plains -- a personal evolution that echoes an earthquake in American spirituality. I refer, of course, to the early 19th century transformation called by historians the Second Great Awakening. It must have had its appeal as spiritual armament in a howling wilderness where parsons in gaiters seldom penetrated. But it signaled the abandonment of a style of spirituality peculiar to the genius of the American founding generation: an 18th century view called deism.

The deists, influenced as they were by the French Enlightenment, pictured a God majestically indifferent to the pettier vanities and ambitions of humankind. We lived, they said, in a Newtonian universe whose creator had wound it up and set it ticking on its own like a great clock, then stood back. How important was deism at America's founding? Very. Whatever claims are now made about American religious origins and doctrines, it can't be denied that deism was the overriding persuasion of our great founding generation -- Washington, Adams, Jefferson, Madison, Franklin and many others. Nor that under the benign influence of this outlook they designed a constitutional system in which church and state were to be eternally separated.

They foresaw that a nation of radically different religious outlooks (where heresy hunters were already zealously at work) would need vigorous safeguards against fraternal jihads and crusades. They witnessed the ruinous force of internecine religious conflict all about them and sought to protect against it. "Congress shall make no law respecting an establishment of religion..." -- the Establishment Clause of the First Amendment -- was the result.

Today, alas, those words and their meaning have grown foggy in the minds of many. I was startled, some years ago, to discover that even the great Sen. Daniel Patrick Moynihan had remembered them incorrectly. He thought the clause read: "Congress shall make no law respecting the establishment of a religion" -- a consequential mix-up of definite and indefinite articles. There are even Supreme Court justices who think, or pretend to think, that what the Establishment Clause does, and all it does, is forbid an established church -- a view that scants the clause's scope no less than its original intent. It was apparently the hope of Madison and other draftsmen to forbid any federal meddling whatsoever with religion, even in those states that still maintained church establishments. But as Madison's auxiliary writings make abundantly clear, the phrase "an establishment of religion" also embraced any and all programs of subvention to religion.

At this late date, 213 years after the First Amendment became basic law, this should be American History 101 and duly respected as such. In fact, however, the sentiments that animated Washington, Jefferson and Madison have diminishing resonance in America. History has been supplanted by an imaginary past -- and no less by a bloodthirsty imaginary future. Millions profess to expect the lurid scenarios forecast by biblical prophecy and colorfully reimagined at a sub-Stephen King level in the "Left Behind" novels. In this heavy-breathing world what force do antique constitutional words retain?

Amnesia about such basics is perhaps to be expected in a hectic post-election season, but the remedies now being hawked in Democratic circles are dubious indeed. The most basic problem is not only the extreme variety of American religious persuasions but also the impossibility of faking religious convictions even in the tinsel world of electronic illusions. What we need is not more of the same but a long-term investment by the Democrats in the underlying good sense of the American people.

When I see pious evangelicals in their cavernous conventicles waving their arms in the air like football referees signaling a touchdown, or Major League Baseball pitchers pointing heavenward in prayerful thanksgiving for a low ERA, I wonder what ever happened to American spiritual modesty. I wonder what became of those Baptists of every stripe who abounded in my small Southern town, and of their conviction that religion was a private conversation with the deity, not something to be worn on the sleeve or boasted of to others, let alone used as a guide to voting.

Perhaps those good people still recalled that even in colonial Virginia (to say nothing of Massachusetts) their ancestors had been enchained and jailed for heresy by civil authorities. I know they were wary of contemporary religious demagogues like Father Charles Coughlin of the Shrine of the Little Flower (known as the "radio priest" in the 1930s), whose anti-FDR tirades were regarded as shocking, even un-American, intrusions of theology into politics. It is reliably said that George Washington spent more Sundays fox hunting than church-going, but what chief executive would dare be accused of such relaxation today? That was then, and this is now.

So, Mr. Jefferson, where are you when the Democrats need you? Any abatement of the gathering wars of sanctimony would demand, to begin with, some passing reference to the book of Job, where we are sternly warned against presuming to know the unsearchable ways of the Almighty. It follows that we should hear less from canting political preachers (including Roman Catholic bishops and elected officials).

I see no prospect just now of an outbreak of spiritual humility in the Bush White House. But should the Democrats imitate its tawdry piosity? Perhaps it is not too late for Democrats to chose the better alternative and remind themselves of older and deeper -- and assuredly more genuine and modest -- American religious traditions.