This creepy animated holiday feature based on the popular children's book -- featuring Tom Hanks as the voice of no fewer than six characters -- has more padding than a junkie's Santa suit. 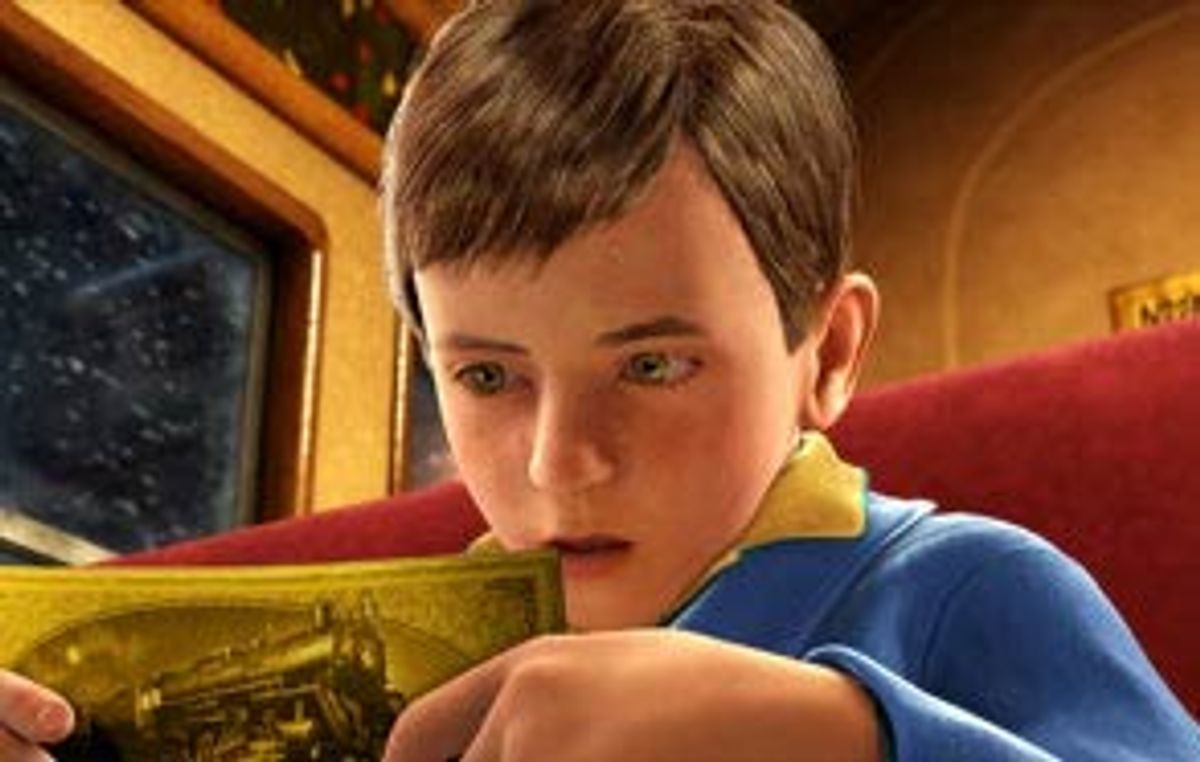 Tom Hanks as a hobo with cruddy fingernails. A set of train tracks that lead, seemingly, to nowhere. Writhing elves -- throngs of them -- with Dakota Fanning bodies and Karl Malden noses. Beware the creeping horror that is "The Polar Express."

By now you all know how the allegedly revolutionary animated feature "The Polar Express," based on Chris Van Allsburg's popular and charming picture book, was made, but just to recap: A special tool, kind of like a blackhead extractor, is used to remove the souls of real-life actors so their faces and bodies can be cloned and freeze-dried in a handy digital format. Then, a special reanimation process brings them to "life." Voilà -- the stuff nightmares are made of, masquerading as a tale of Christmas joy and wonder.

Actually, the wonder "The Polar Express" induces feels something like a coma. The main characters don't have names, just handy identifying monikers like "Hero Boy" and "Hero Girl" (the latter so named probably because "Token Person of Color" just doesn't swing). Hero Boy (his voice is provided by Tom Hanks) has just reached the age where he has begun to doubt the existence of Santa Claus. But on Christmas Eve, as midnight approaches, he creeps out of the house in slippers and bathrobe and boards a mysterious train that happens to be running right down his street.

The train is loaded with other children, also dressed in their PJs, among them Hero Girl (Nona Gaye), who fixes Hero Boy with a cool, scrutinizing stare that's supposed to be friendly and welcoming but actually looks like something you'd expect from the telekinetic twins in Brian De Palma's "The Fury," the ones with such potent supernatural powers they can make people bleed just by looking at them -- you expect his brain to explode any minute. A third little friend, Lonely Boy, trudges through the snow to catch up with the train as it threatens to leave him behind. Lonely Boy is a sickly lad, the movie's Christ Child metaphor -- he finally does scramble onto that train but then he sits, alone, in a separate car, until he is transformed by the kindness of Hero Girl and Hero Boy. When they bring him a mug of steaming hot cocoa, he tosses away his crutches and, yes, walks again.

OK, there are no crutches, but there is a surly-friendly train conductor (again, the voice of Hanks), an elusive hobo who threatens to cook up the true meaning of Christmas over a Sterno can (Tom Hanks again), and Santa Claus himself (again, you guessed it, Hanks), who is a refreshingly benign figure after all these "Village of the Damned" sprouts. Because Van Allsburg's book is so slim and direct, it serves as only the barest bones for the story here. The movie borrows the book's aura of '50s nostalgia: Hero Boy's slippers have an embroidered Roy Rogers design on them, and the train has the cozy, wood-paneled, leather-seated look of old railroad cars. (There's even a wonderful art deco club car, totally wasted on little tykes who are too young to smoke.)

But because filming the actual book would give us a movie of about, oh, 12 minutes, this "Polar Express" needs more padding than a junkie's Santa suit. So we have children crawling, at great danger to their lives, along the tops of speeding train cars; children creeping along a set of narrow elevated railroad tracks, such that one misstep would cause a death plunge; and children hanging precariously from the sides of train cars, simply because, well, it looks cool.

All of that is supposed to generate "excitement" that Van Allsburg's book just doesn't have -- because the book, after all, is just a simple fable about belief. Ultimately, that's what "Polar Express" wants to be, too, but director Robert Zemeckis just loads it up with clutter.

I could probably have tolerated the incessant jitteriness of "The Polar Express" if the look of it didn't give me the creeps. The movie is more meticulously detailed than real life is -- even the characters' eyeballs have texture. Their skin moves with the pliability of warm latex, and it glows with an alien sheen. If nothing else, "The Polar Express" wears its dollar signs all over the screen: Appliqu&eacutr;ing all that wonder on, with such tight little stitches, sure is labor intensive. And if you think I'm being too tough on "The Polar Express," you're probably right. So I ask you to look at this rapturous holiday idyll with the eyes of a child. Just please give them back when you're done.