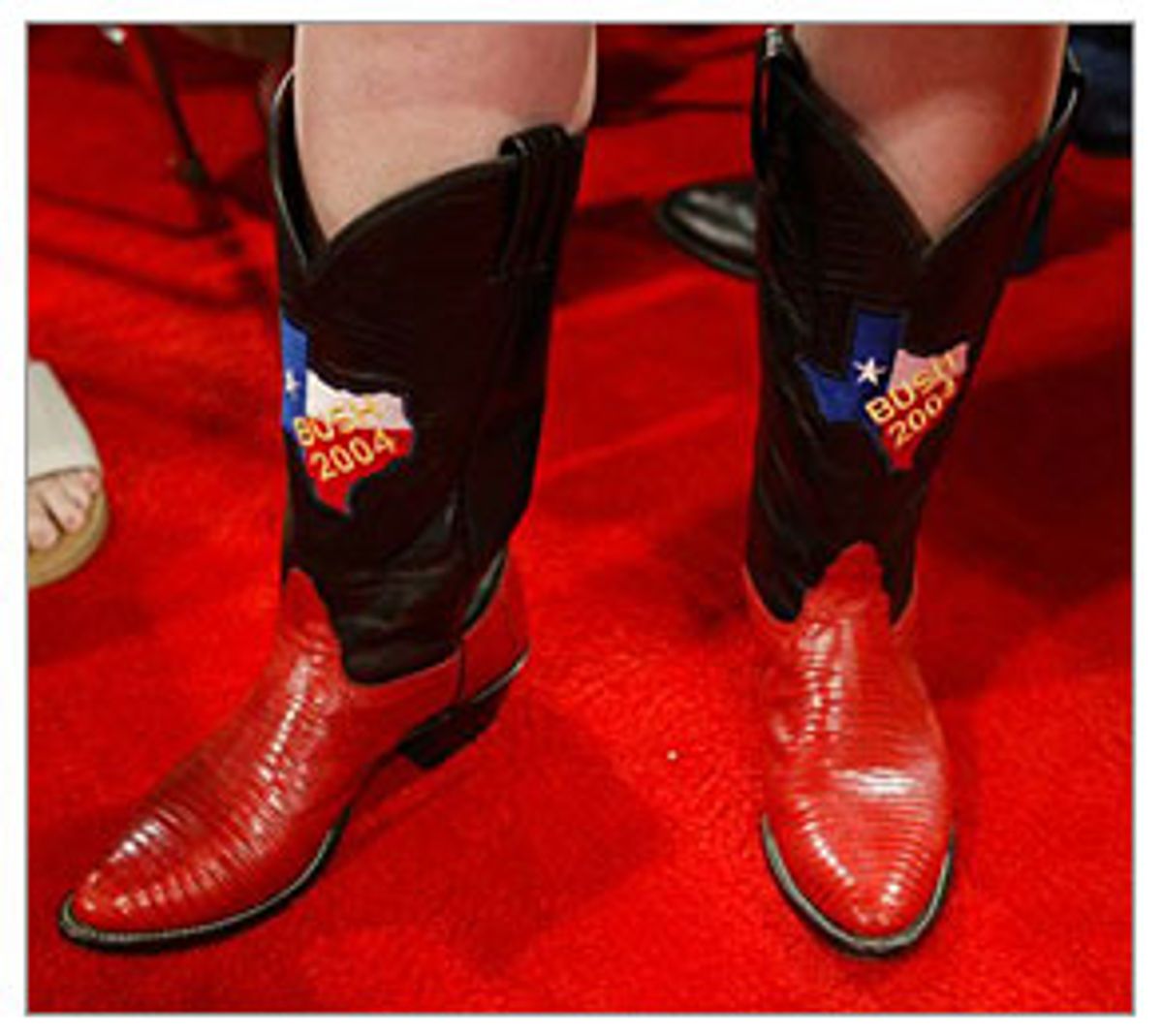 With the reelection of George W. Bush, the Texanization of American politics is virtually complete. Ever since 1845, when the state was annexed by the United States, the Lone Star State and what it represents have been controversial. At that time, Ralph Waldo Emerson said the push to add Texas to the Union was an event that would "retard or retrograde the civilization."

Retrograde or not, Bush's convincing win over John Kerry means that America's identity has now been subsumed by the Texas worldview. American voters have chosen a government that is militarist, self-absorbed, piously Christian, dominated by big business, generally unconcerned about social inequality, and perfectly happy with regressive taxation. Those characteristics have defined Texas for generations. And now that Bush has regained the White House, the state will accelerate its export of these attitudes to rest of the United States, if not to the rest of the world.

This election had many facets. But a recurring theme -- and criticism -- of Bush was his image as a cowboy. For his critics, Bush the cowboy was a hayseed, a country bumpkin with too much pride and too much power who was always ready to reach for his revolver. For Bush's backers, Bush the cowboy was the modern version of "Gunsmoke" marshal Matt Dillon, a quick-on-the-draw gunslinger who would, as Bush put it, get the bad guys "dead or alive."

Bush's entire campaign strategy was based on that image: Bush, the tough hombre who never makes a mistake, will protect America from those varmint terrorists. The sissy senator from Massachusetts won't. End of speech. Repeat. Then repeat again. And again.

It worked. And thanks to Bush's roots in the Lone Star State, the tough-guy image was, of course, the cowboy. The European press in particular seized on this theme. In April, the Guardian called Bush an "inept cowboy" who can't "keep the herd settled in at night." Yet Bush reveled in the cowboy image. During the Republican Convention, Bush told his faithful: "Some people say that I have a swagger. In Texas, we call it 'walking.'" The crowd roared its approval.

Like Texan Lyndon Johnson, Bush has a rural hacienda that allows him to play the role of gentleman rancher. He wears cowboy boots. When dressed in casual clothes, he often wears a big belt buckle. Like Johnson, Bush wears a cowboy hat while on the ranch. Bush's straw hat is finished in a style known as a "cattleman's crease" -- even though the cattle being run on his Prairie Chapel ranch do not belong to the cowpuncher in chief. (In fact, neither does the ranch itself; it's owned by a Midland, Texas, outfit known as the Lone Star Trust.) Bush has even played the cowboy in Washington by wearing a pearl-gray Stetson on occasion. And of course, Bush adjusts his drawl up or down depending on just how Texan he wants to be.

Texas was an essential part of Bush's path to power. Born in New Haven, Conn., and a product of Andover, Yale and Harvard, Bush acts the Texan in a way that would never have occurred to Johnson. For Johnson, who grew up on a hardscrabble ranch in Blanco County, the Texas attitude, the Texas accent, was inbred. He couldn't turn it on or off in the way that Bush does so skillfully. Johnson was an arrogant but charming, undereducated, overachieving, rough-hewn politico who got his degree from Southwest Texas State Teachers College in San Marcos and never felt comfortable around the fancy-pants intellectuals who went to the power schools in the East.

George W. Bush embraced Texas myths and style in a way that his father never could or would. And Texans see Bush II as one of their own. Last year, Houston oilman George Strake Jr., a veteran of Texas GOP politics for several decades, told me that the elder Bush "had to learn the Texas mentality from a book. But 43 [George W. Bush] has the Texas mentality in his heart. He was raised out there in west Texas."

For historian H.W. Brands, a professor at Texas A&M University whose most recent book is "Lone Star Nation: How a Ragged Army of Volunteers Won the Battle for Texas Independence -- and Changed America," having Texas "in his heart" goes a long way toward explaining Bush's foreign policy. The president is "quite willing to tell the world to 'go to hell -- this is the way we are going to do it,'" says Brands. "The first George Bush was a New Englander and was by nature much more attuned to the sensibilities of other countries."

The tough-guy attitude is as much a part of Texas as the Alamo or the Dallas Cowboy cheerleaders. It's an attitude -- and a self-obsession -- that stems from the nine years the state was an independent country. It also comes from the Alamo, the losing battle in San Antonio that went on to become the battle cry for the Texas soldiers fighting the Mexican army. The defeat at the Alamo is a perfect example of Texas' insular attitude. "Texas celebrates a military disaster," says Brands. "I don't know of any other military defeat that is so celebrated." Stir in several billion barrels of light, sweet crude oil; pour in a steady stream of immigrants (mainly from points south) who happily accept cheap wages; and you have the formula for an inward-looking state that continually reinforces its creation myths.

These elements -- along with its music, its movies and several other ingredients -- endow Texas with a swagger, a halo of self-congratulatory pomposity unmatched by any other state. In 2003, the Texas Legislature passed a law requiring schoolchildren to recite the Pledge of Allegiance every morning -- to the Texas flag. Texans have internalized this maniacal self-obsession with their state. It's a concept best summarized by singer-songwriter Ray Wylie Hubbard (a native of Oklahoma), who, in 2003, released the instantaneous classic "Screw You, We're From Texas."

That "screw you" attitude is key to understanding the Texas approach. Perhaps it's a coincidence that two of the last three presidents -- and three of the last eight -- have been Texans. But it's hard to dismiss as coincidence that all three of those men fought major wars. Johnson hurled the United States into Vietnam, and was racked by doubts about his decision to escalate the conflict. Both Bushes waged wars against Iraq.

Texans had fought in two wars before the state was annexed -- after a lengthy and acrimonious debate in Congress -- by the United States. The militarization of the state began during the Mexican-American War. After that war ended, the U.S. Army built a string of forts in the southern and western parts of the state to keep the Mexicans and the Comanches at bay.

The forts built after Texas statehood had a clear result: Texas became the most militarized state in America. More enlisted personnel are stationed in Texas than in any other state. Policy decisions about the Persian Gulf may be set in Washington, but they are enforced by soldiers stationed at Fort Hood, America's biggest military base, which sits less than 20 miles south of Bush's ranch in Crawford. Fully 10 percent of the personnel in the U.S. military are Texans, even though Texas accounts for 7 percent of the nation's population.

When the second Iraq war started, two of the six members of the Joint Chiefs of Staff were Texans. The commander of all U.S. forces was U.S. Army Gen. Tommy Franks, who hails from Bush's old stomping grounds, Midland. The commandant of the Marine Corps, Gen. Michael Hagee, is from Fredericksburg. Another leader of the war in Iraq, Lt. Gen. Ricardo Sanchez, is from south Texas.

What's more, many of America's biggest companies are located in Texas. More Fortune 500 companies are based in Houston (18) than in any other city except New York. Big Business loves Texas because of its regressive tax policy; it is one of just seven states that does not charge any form of personal income tax. In fact, Texas has a constitutional amendment that prohibits an income tax without the consent of voters. Low tax rates allow corporations to pay their workers less and make bigger profits.

While it's not yet clear what effect Texas' social maladies will have on the country as a whole, demographic trends are making Texas an ever more influential state. By 2025, the U.S. Census Bureau expects Texas to have 27 million residents, a 30 percent increase over the 2000 figure. Over the same time period, the populations of Illinois, Michigan, New York, Ohio and Pennsylvania will remain essentially flat. That shift in population -- and the political power that accompanies it -- will concentrate even more clout in Texas. It will get more seats in the House of Representatives, and the Electoral College votes that come with them. Those votes will decide the presidency. Since 1924, only two men have won the White House without winning Texas: Richard Nixon did it in 1968, and Bill Clinton did it twice, but only because billionaire Texas maverick Ross Perot was on the ballot both times.

Bush's Texas cronies will continue to influence the nation's politics for many years after he leaves the White House in January 2009. Although Karl Rove had a lower profile in this election than he did in the 2000 campaign, his influence will remain enormous. Rove was the key factor in turning Texas into a solidly Republican state. (Not a single Democrat today holds statewide office in Texas.) And now, armed with Bush's 3-million-vote mandate, he will continue pushing for a nationwide Republican majority that could endure for generations.

Bush's inner circle of advisors -- Karen Hughes, Mark McKinnon and Matthew Dowd -- may be major players in 2006, 2008 and beyond. Hughes, Bush's former press chief, has become one of his main operatives, doing TV work, carrying his message and advising him on strategy. Hughes is also making big money as a speechmaker. Rumors continue to fly around Austin that she might be interested in running for political office in Texas. McKinnon, Bush's image-maker, will continue making TV commercials and messages. Dowd, a Texan who worked in state government before joining Bush's campaign, has been the GOP's chief pollster. He too is rumored to be planning a run for statewide office in Texas.

Bush will continue using the spoils system to appoint Texans to plum jobs. White House general counsel Alberto Gonzales is frequently mentioned as a possible appointee to the Supreme Court. James Oberwetter, a Dallas oilman and Bush family insider, is now serving as the U.S. ambassador to Saudi Arabia and, thanks to Bush's reelection, will continue his stint in Riyadh for the foreseeable future. Halliburton, the company that continues to send deferred compensation paychecks to Vice President Cheney, remains one of the federal government's biggest contractors. Baker Botts, the Houston law firm that has gained more from the Bush presidencies than any other law firm in America, will continue to get plum appointments. That firm's superstar, James Baker, will continue using his positions with Baker Botts, with the Carlyle Group and as Bush's Iraqi debt envoy to further blur the already fuzzy line between business and government.

It's all part of the Texas takeover. In 1962, John Steinbeck wrote that Texas "is a nation in every sense of the word." Four decades later, it appears that Steinbeck was right. It is a nation: the United States of Texas.