The Lone Star State adopts school health texts that say nothing about contraception -- even though the state has the highest birth rate among high school students in the nation. 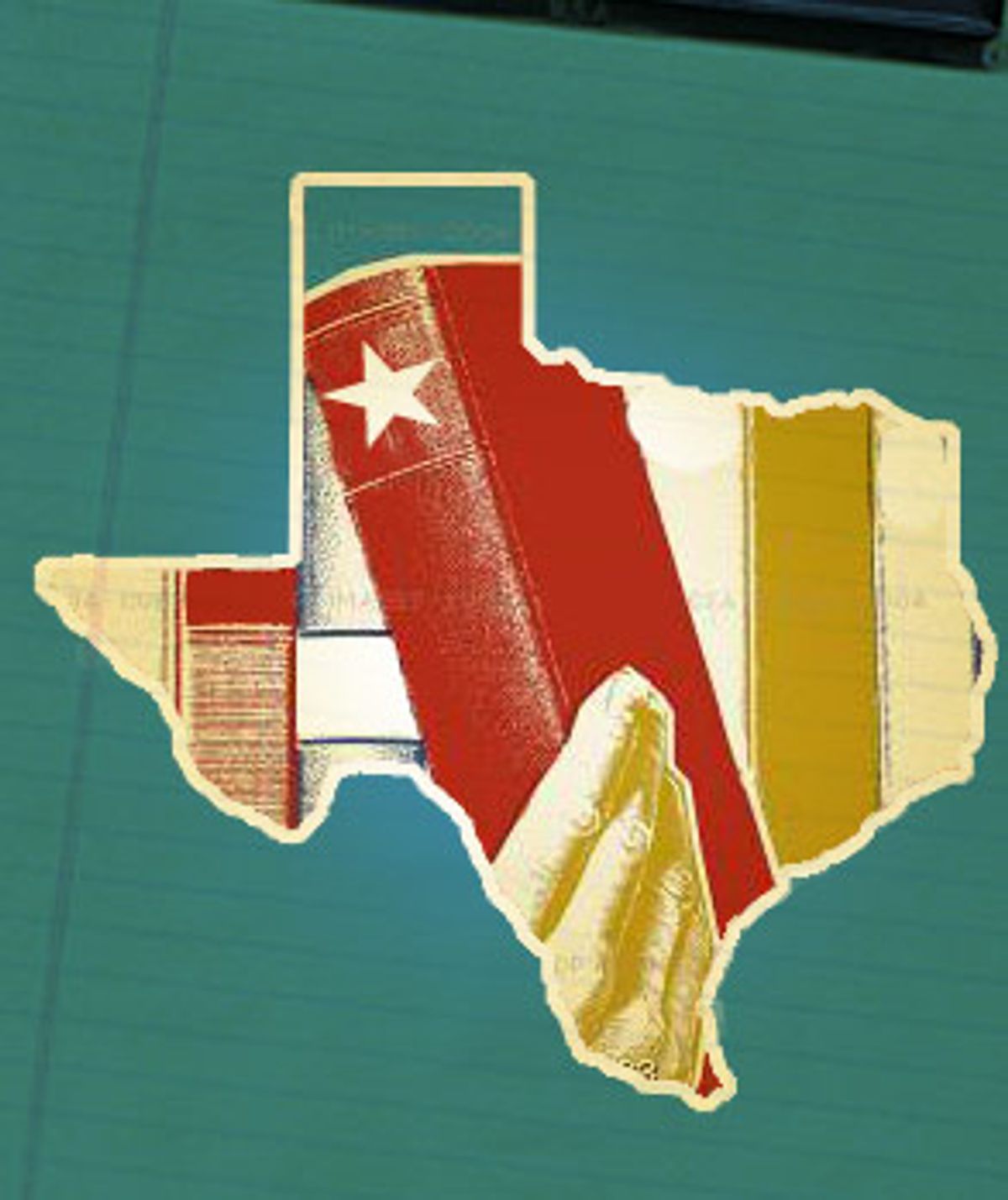 Hey, kids! Want to know how to avoid contracting a sexually transmitted disease?

"Get plenty of rest."

That's one of the eight STD-prevention steps listed in one of the four high-school and middle-school health textbooks approved for state adoption last week by the Texas State Board of Education (SBOE). "When you're tired, it's hard to think clearly," the text continues. "Don't put yourself in a situation in which you have to make a tough choice when you're tired." The other steps include: "Respect yourself" and "Go out as a group" ("You can also take the pressure off by double-dating"). No mention is made of the barrier methods of contraception, such as condoms, that help prevent STDs. One almost expects to see, in its stead, something about "an apple a day."

Since the SBOE's 13-1 vote on Friday, much attention has been paid to a last-minute -- and essentially successful -- campaign on the part of one board member, Republican Terri Leo, to change language in the textbooks to define marriage, in accordance with Texas law, as a "lifelong" union "between a man and a woman" (as opposed to, say, "people," "couples" or, God forbid, "partners"). But the focus on what amounts to a one-sentence edit in one textbook -- by the way, you should see the suggestions of Leo's that didn't make the cut ("Opinions vary on why homosexuals, lesbians, and bisexuals as a group are more prone to self-destructive behaviors like depression, illegal drug use, and suicide") -- while plenty alarming, has partially eclipsed the broader sex-education debate over these books and its implications nationwide. Leo's efforts, which evidently surprised many of her colleagues, actually came at the tail end of six months of tumultuous hearings, closed-door committee meetings, and agitation on all sides over the issue of what to tell the kids about contraception. And last week it was decided: Don't tell them anything.

"Well, that's Texas," blue-state parents might think. "My kids will still learn to put a condom on a banana." But Texas is, after California, the second-biggest U.S. textbook buyer -- in a market with only four publishing companies. As such, it's uniquely poised to set the standard. "Publishers design their books around what goes on in Sacramento and Austin," says Gilbert T. Sewall, director of the American Textbook Council.

Of the four books just approved in Texas, only one of the student editions mentions, in passing, a form of contraception or disease prevention other than abstinence. Otherwise, it's all abstinence, all the time. If students want information about condoms, they're going to have to swipe the teachers editions, two of which will include a listing of contraceptives (along with their failure rates). (Teachers editions are annotated versions of the textbooks that include additional information along with teaching guidelines and suggestions.)

"This is sad for Texas teens," said Samantha Smoot, president of the Texas Freedom Network, an advocacy group that calls itself "a mainstream voice to counter the religious right." Smoot estimates that 4 million teenagers will use the books over the 10-year period for which they were approved. Those teens, she says, "will rely on these textbooks for information that is accurate and up-to-date. Instead of doing the responsible thing and providing high school students with lifesaving information about sex and health, the State Board of Education has left them to fend for themselves and get information from each other and sources like the Internet and MTV."

In an odd switcheroo, proponents of abstinence-only sex ed seem to want it that way. "The information is everywhere," says Kyleen Wright, president of the Texans for Life Coalition, who, when asked how kids who choose to have sex should educate themselves about safety, cited the Web sites of archenemies such as the Kaiser Foundation and Planned Parenthood. "It's in libraries," she continued. "These kids aren't living in a bubble."

No, they're not. Texas has the highest birth rate in the nation for teens aged 15-17. Among the nation's 50 largest cities, Austin, Texas, ranks 15th in percentage of births to teens.

Proponents of abstinence-only sex education also suggest that the birds and the bees are best discussed at home with parents. It's a nice thought, says Austin attorney Deena Kalai, who does extensive pro bono work with teens in crisis and who testified against approval of the textbooks. "They're just not sitting around the dinner table having a family chat about sexuality," she says. For many teens, "It's more like, 'Mom's drunk, Dad beats her up.' There's no communication whatsoever."

Currently, only 15 states require that contraception be "covered" (none requires that it be "stressed") in sex education to begin with. But Texas' example helps pave the way for looser interpretations of the notion of "cover." When approving textbooks, the SBOE is charged specifically, and only, with deciding whether the books in question meet the Texas Essential Knowledge and Skills (TEKS) curriculum standards, in this case for health education. TEKS Article 71 requires that students be able to: "Analyze the effectiveness and ineffectiveness of barrier protection and other contraceptive methods including the prevention of Sexually Transmitted Diseases (STDs), keeping in mind the effectiveness of remaining abstinent until marriage." Critics of the textbooks, offering line-by-line analyses of where they fall short, wonder how texts that don't even mention the word "condom" could come close to satisfying TEKS. Proponents, however, appeared to be satisfied with the mention of contraceptives in the teachers editions. (Leo's efforts to codify heterosexual marriage thus fell far outside the purview of both TEKS and the SBOE. She did not return phone calls requesting comment.)

Even where school districts have some autonomy (and parental input) in terms of setting sex ed curricula above and beyond the state-approved -- and therefore covered by state funds -- textbooks, their hands are often tied. Any money for supplemental materials must come either from the federal government -- which funds only abstinence programs -- or from the district itself, which is unlikely to have a slush fund.

Yet according to at least one survey, there are plenty of parents who'd get behind a sex ed bake sale. An August poll commissioned by Protect Our Kids, a coalition founded to oppose the textbooks, found that 90 percent of Texans "favor teaching students age-appropriate, medically accurate information on abstinence, birth control and prevention of sexually transmitted diseases and HIV." That's up from 86 percent in 2001. (A recent Kaiser Family Foundation survey yielded similar results nationally.) "People understand that this is no longer a controversial issue," says Dan Quinn, spokesman for the Texas Freedom Network, a coalition member. "It's astonishing to see that this is still a matter of debate."