Perverse pleasure is the best revenge

Get back at red America -- with kinky sex, pretentious French movies and a hasty divorce. 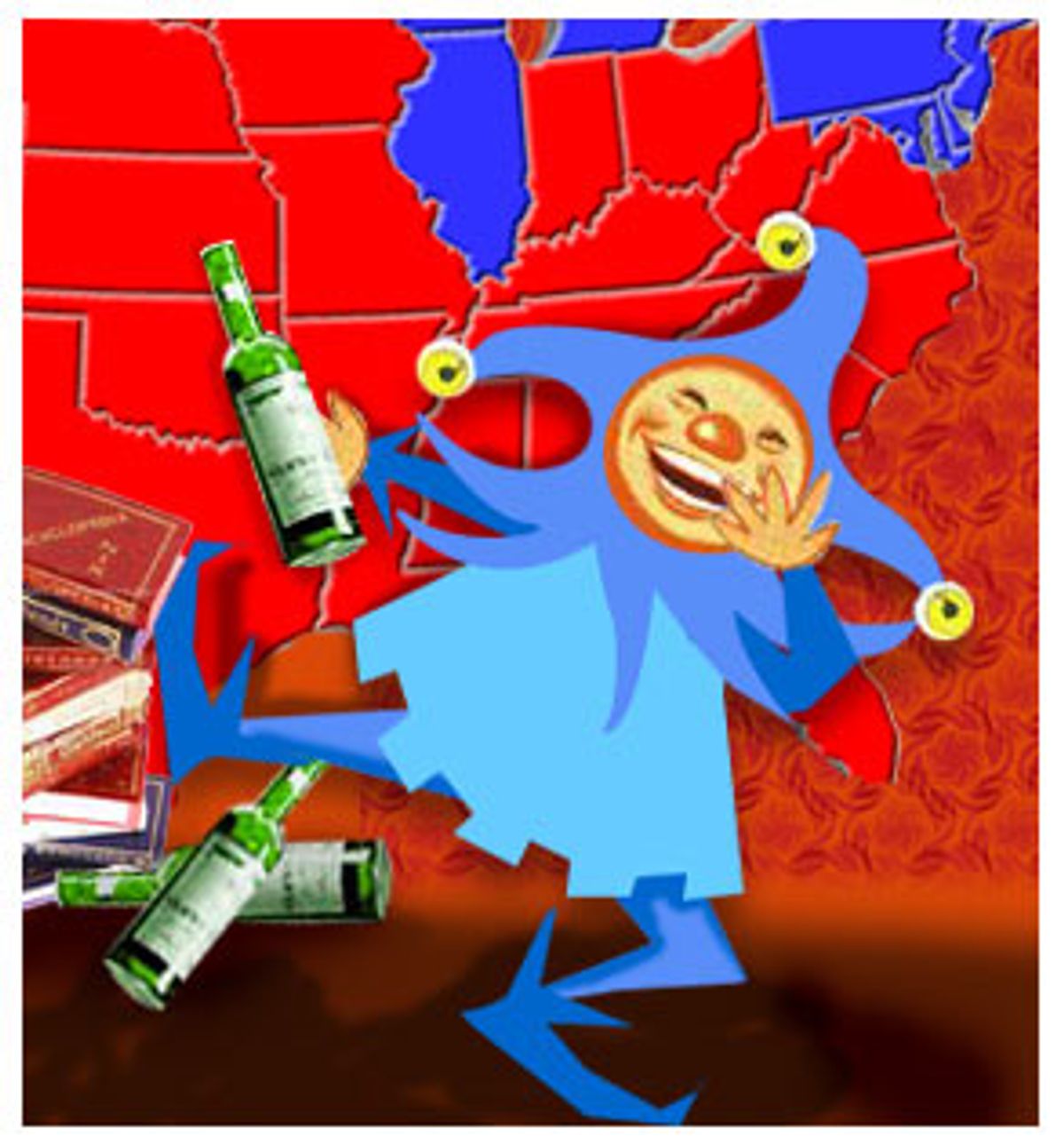 OK, it's worse than we thought. It's not just post-election blues. It's full-on, why-am-I-even-here depression. Who knew that last week's 48-hour cycle of hope, premature celebration and crushing defeat would have aftershocks that reverberated so far?

At first it was just exhaustion and the damaging psychological reversals of Tuesday's demoralizing polling-results debacle. We were left sore and nauseated, as if we'd taken a baseball bat to the belly. But it didn't get better after a good night's sleep. Next came rage -- at friends, family, entire states, individuals we've never met. If I could have burned Rudy Giuliani in effigy, I would have. This blinding, electric fury was at least an embrace of something vivid and alive, before the inevitable turn to existential despair. It wasn't about politics anymore. It was about life: There is no hope, no belief. Everyone and everything lets you down. There's been crying -- so much crying. At work and on the street and on subway platforms and at my friend's 30th birthday party on Saturday night at a swank private club. Just little rivulets of tears falling down the faces of people I don't know to be easy weepers. So common that no one even remarks on it anymore.

So yeah, it all sucks, elementally. We lost. We don't have anything to look forward to. We have been defeated, by our own country, by ourselves. We gave everything we had, just like our parents told us to do, and it wasn't enough. The Enlightenment is being rolled back before our eyes. We can't get a firm enough grip to hold it in place. We're dying. We're all going to die ...

There have been lots of suggestions already -- "Go see 'Ocean's 12'!" "Join the ACLU!" "Volunteer!" -- that are all very well and good. Yes, yes, yes, by all means, join the ACLU. But what about bringing back the pleasure? We -- whether we are in red states or blue -- need joy, ecstasy, or at least distraction, to keep us off the ledge and maybe even irritate the evangelicals at the same time. Below are some ideas for how we -- the losers, the sinners -- can throw off our comforters and scramble back to the land of the living, reclaiming whatever remains of our country, our day, our way of life -- before we're all rounded up and shot.

1) Have extremely deviant sex. Sadly, unlike the blackout, or the aftermath of Sept. 11, the post-election period doesn't seem to be bringing us much post-election sex. Where the fear and recovery from those events were about unity and embracing life, starting anew, and at the very least, getting lucky, post-election depression has thrown a soggy blanket over our libidos. We feel isolated and alienated from each other, defeated. Our eagerness to bring new life into this world has abated, and with it, the confidence that should we accidentally bring new life into this world, we might not be able to get rid of it.

But we have got to get over that. Holing up alone and abstaining from nooky is letting the terrorists -- and the abstinence advocates -- win! Plus, what better way to annoy the family values brigade than having really kinky sex. Make like Toni Bentley and celebrate your right to sodomy, now legal in all 50 states, though, let's be honest, probably not for long! Take a page from Paris Hilton's book and flip on a camera. Distribute it on the Internet, tell your friends. Feel free to dress as your favorite Bush twin.

2) Get a divorce. No, seriously. Even if you don't need one. It's a way to show your solidarity with your homo brethren, who in 11 states are about to lose whatever partnership benefits -- you know, like health insurance -- they've managed to scrape together for themselves. Besides, if you're straight, you can live safe in the knowledge that you can always remarry -- again and again, to as many different straight people of the opposite sex as you desire -- later. Meanwhile, if you and your partner are still getting it on, you'll be upping the rates of sex outside of marriage.

3) Read a book. And when you're done with it, donate it to your local public school. Start with "The Origin of Species" and move on through some other tomes sure to expand the minds -- if not the church-sanctioned morality -- of the young. Yeah yeah, make sure to include the standard baddies: Margaret Sanger's "Family Limitations," "Huck Finn" and "Go Ask Alice." But look to some of the lesser knowns for more nuanced inspiration: Pick up Maurice Sendak's "In the Night Kitchen," where Mickey shows his willy, and Walt Whitman's "Leaves of Grass," which covers the poet's sorrow over seeing his nation divided and gay sex! Reread the whole Judy Blume canon (masturbation, sex, periods, erections, birth control, religious questioning, yadda yadda yadda) and then box it up and ship it off to a sixth grade class. You can scare yourself silly all over again by reading Margaret Atwood's "A Handmaid's Tale" and then make a gift of it to the local junior high. If you still need inspiration, take a gander at one of the banned books lists online. I don't know what "Daddy's Roommate" by Michael Willhoite is, but it sounds like something my alma mater in Abington, Pa., could use a few more copies of.

But I don't mean to suggest that you have to be all pious or crunchy. Go with your gut, pick out what feels good, work your way deep into a book -- any book -- and forget the rest of world. Chances are, if you're enjoying it, it's probably pissing someone off. Even Bridget Jones has anal sex. And never forget to laugh: I recommend Woody Allen's "Without Feathers." I have no idea if it's ever been banned, but I can't be the only person whose 10th grade universe expanded -- hilariously -- when she picked it up for the first time. And come on: The man married his life partner's Asian daughter and spends time playing the saxophone in Paris! Yay Woody Allen!

4) Go to the movies. The cinema has taken our minds off of both World Wars, the Depression, Vietnam and Watergate. But please, even though it's really funny and great, don't go see "The Incredibles"! Or Shark Tale. Or anything else that is going to beam a dollar-studded message to the studios that the way to make a buck is to continue releasing good clean family fun.

Slap down money for exorbitantly priced tickets to the transgressive fare currently getting beaten to a pulp at cineplexes: John Waters' "A Dirty Shame" (tag line: "threatening the very limits of common decency") or the totally offensive "Team America," or that Nicole Kidman flick where she takes a bath with a 10-year-old. Celebrate deviance, grotesqueries, cannibalism -- if you can find it in the multiplex.

And you probably can't. But you could rent "Sweeney Todd," or 2000's "Keep the River on Your Right: A Modern Cannibal Tale." I bet you think you can make yourself feel like you're doing something by renting or buying the "Fahrenheit 9/11" DVD. Please. It may lead you down the path of righteousness, but trust me, it's only going to make you cry more, remembering how you thought it was going to make a difference. And who needs more goddamn crying? Treat yourself right -- and remind yourself that the holidays are right around the corner -- by renting last year's "Bad Santa" with Billy Bob Thornton. When a kid asks Thornton's department store Santa, "Do you and Mrs. Santa have kids?" he replies, "No, thank the fuck Christ." And while nailing someone in the dressing rooms, Santa screams this sweet nothing: "Oh yeah, baby, you won't be able to shit right for a week!" Happy holidays!

5. Give in to the zeitgeist and dumb down. Stop with the Atlantic and NPR and Air America already. They'll still be there when you get back. Just take a couple of days and download images of naked B-list celebrities. We'll help you cheat a little with this video of Tara Reid's dress falling down. You're on your own from there.

7. Take a walk. Go hiking. Take some pictures of what's left of America's natural landscape. Take several. No one needs to explain why this is important.

8. Forget your big plans to boycott red states: We don't need to become condescending jerks so consumed by our own sense of what's right that we leave the economies of hardworking, thinking people in the middle of the country hanging in the breeze.

All we need to do is boycott Wal-Mart.

10. We don't know how to say this, but: Exercise your choice now, girls, while the exercising's good.