Breed all about it

The new niche magazine "Conceive" has a lot of useful information for women struggling to get pregnant. So why did I feel like hiding it on the subway? 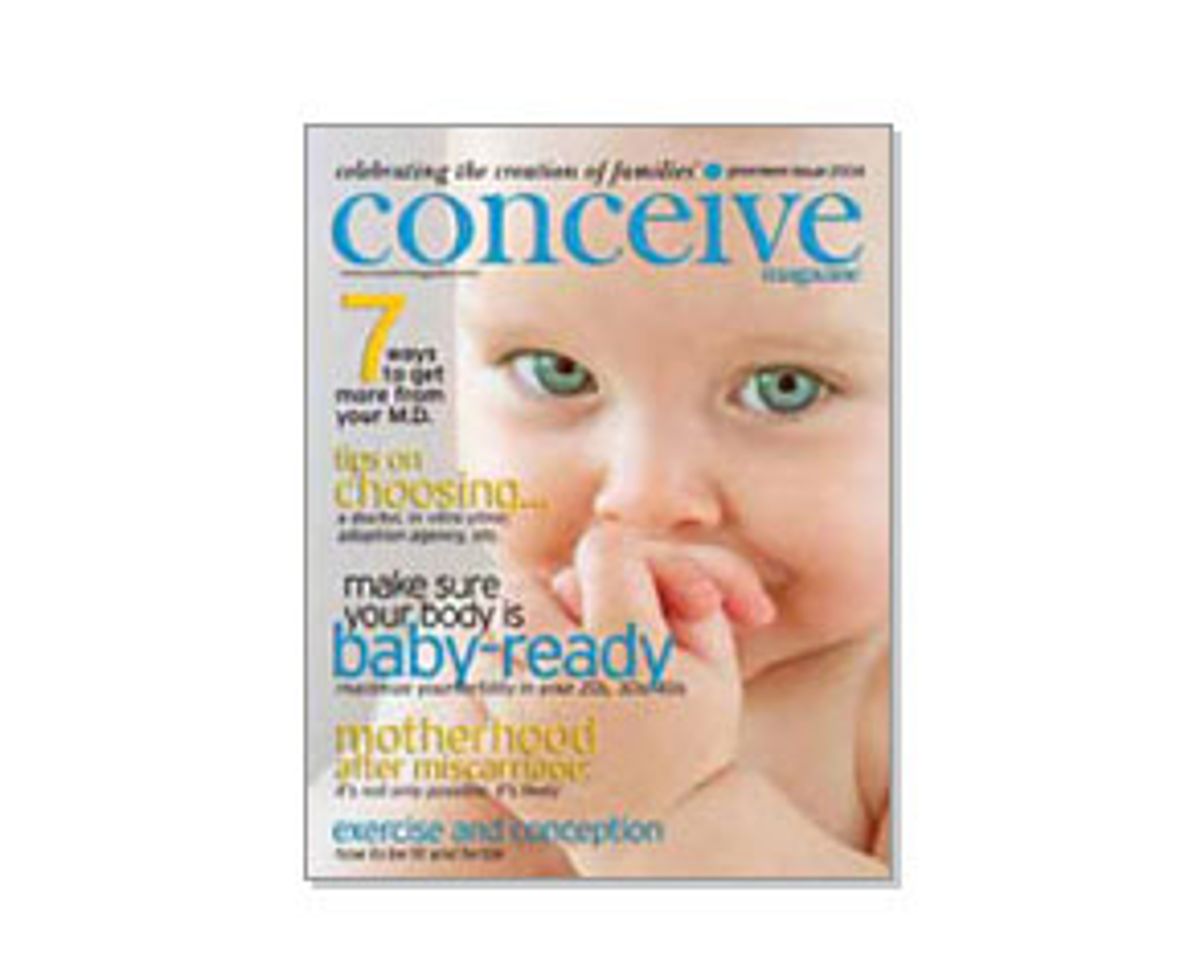 Having a baby is, biologically speaking, the most natural thing in the world. Perpetuating the species is what species do, no matter how hard we tried not to in college. So why, when I sat down on the subway and pulled out a copy of the premiere issue of the new bimonthly magazine Conceive, did I feel the urge to hide it behind something more "acceptable," like the Nation, or the Star?

Whatever the reasons for it -- and we'll get to them -- my self-conciousness is pretty much the opposite of what Conceive's co-creator, Kim Hahn, has in mind. "We want to bring infertility out of the closet, show that it's not something to be ashamed of, give it a mainstream look and feel," she says, adding that the magazine is geared toward any woman even thinking of starting a family, not just those who are already having trouble -- and not even just those who are sure they want to breed in the first place. "This magazine is even going to support your decision to wait. We're not saying, 'Better have a baby in your 20s or you're doomed!'" she says.

Hahn herself, now 38 and a former CFO in the banking industry, had tried to get pregnant for three years -- undergoing several rounds of fertility treatments -- before deciding to adopt a child in 2000. During that time, she noticed that there was nothing at the magazine stand that covered fertility. "You had all the bridal magazines, and next to that you had all the parenting magazines, but nothing in between," she says. She founded Conceive with business partner and fellow financial executive Rob Clarkson, whose own daughter was conceived, naturally but with some difficulty, after a miscarriage. The magazine launched in early October.

Hahn predicts that the magazine's circulation -- triggered initially by direct mail, newsstand presence and placement in doctors' offices -- will be up to 150,000 by January. According to the Centers for Disease Control, at least 6 million women in the U.S. have fertility issues. Hahn and Clarkson say that 10 to 15 million American women attempt to conceive each year -- and that even with all the fertility resources on the Internet, they're craving, as Hahn puts it, "one-stop-shopping" information.

Still, magazines are a tough sell no matter what. Within any given year, it's more likely that a 35-year-old woman will conceive than it is that a new magazine will survive. According to Samir Husni, head of the magazine service journalism program at the University of Mississippi, of the approximately 1,000 magazines launched every year, 60 percent will fail within 12 months, and of those, 70 percent will publish only one issue. For what it's worth, though, it's the smallest magazines that shoulder the weight of the market: According to the Audit Bureau of Circulations, roughly two-thirds of magazine titles have circulations of less than 500,000.

Will Conceive manage to make it to the terrible twos? After all, it's the kind of magazine that readers won't want to subscribe to for long. "Can they find people during their conception time -- and find new ones to replace them when they leave?" asks Abe Peck, chairman of the magazine department at Northwestern University's Medill School of Journalism. He does note that it's an easy sell to advertisers (say, the makers of pregnancy tests), and he sees a need for the magazine, a niche it can fill. "It should have a loyal readership as long as the information's good," he says.

And actually, it's really not bad. Sure, there are the requisite "Celebrity Success Stories," which contain far too much information about Celine Dion's husband's sperm count. And there's a dippy article about "10 Ways to Keep the Romance Alive" during what one friend of mine has referred to as "the Bataan Sex March." Not that maintaining the spark is easy, but come on. Champagne and candles? Duh. "Pinch his bottom"? Ewww. There's also a piece titled "Jewelry That Helps You Conceive" that's merely a shill for an abacus-like bracelet that counts the days of your cycle, informing any woman who wears it, entirely unhelpfully, that her "most fertile" period is Days 8 through 19. (Every woman is different; if you tend to ovulate on Day 16, starting to have sex on Day 8 will do nothing except wear you both out long before your actual prime time.) This kind of gizmo is the stuff of back-of-the-mag miracle diets, not actual editorial content.

But the magazine's weightier service pieces are solid, packed with hard data and helpful info. "How to Choose ... the Best Obstetrician, Reproductive Endocrinologist, Egg Donor, Sperm Donor, and Adoption Agency," with a full, text-heavy page for each, is likely to help a woman feel in charge of, if not overwhelmed by, her medical options. A headline that could trigger baby panic -- "How Fresh Are Your Eggs?" -- goes on to explain that "Chronological age is a very poor indicator of reproductive aging." "Over 35? You're hosed!" is not the message you'll get in these pages.

Indeed, sound coverage of fertility issues is serious stuff about a serious urge to do a serious thing. So why the ick factor? Why did even I roll my eyes when I heard about Conceive -- even when, let's just say, I'm the bulls-eye on its demographic target? I know, for one thing, it's not just personal: When I asked media critic Susan Douglas about the magazine, her from-the-hip response was, "Conceive! Shoot me now."

How come? "The fetishizing of babies is getting out of hand," says Douglas, professor of communications studies at the University of Michigan and co-author of "The Mommy Myth." "It seems to me that -- especially with a title that sounds like an imperative -- it's elevating a kind of pressure and normative message that conception is and should be the center of women's lives." After hearing a more thorough description of Conceive, she tempered her response to the magazine itself, but not her criticism of the media culture that -- at least at first glance -- it appears to be a part of. "There's been an onward march since the '90s adding up to an exhortation to all women that if you don't conceive you are not a real woman," she says. "And there's a broader trend around insistences that women become subservient to children," she adds, citing news articles seemingly critical of working moms. "It's really about getting women back into the kitchen and the nursery, when we've just spent 30 years trying to give women a range of choices -- including staying home."

Granted, no conversation about cervical mucous should ever occur unsolicited. But Purves' article -- and the attitude it represents -- helped me see all the reasons I was sheepish about my subway reading. My urge to read Conceive under cover of the New York Times came from two places. I worried that 1) people who see me reading it would think, If I can't conceive from one night with no birth control and plenty of Bailey's -- i.e., if I have to resort to reading a magazine about it -- something's wrong with me, and 2) people who see me reading it will think that I'm desperate, addled, "obsessed," incapable of "rational analysis," about to strike up a conversation with a stranger about folic acid, liable to run off with that lady's stroller when the doors open at Delancey -- and, worst of all, that I am caving in to the very evil culture that wants me pregnant as badly as I do.

In other words, either I'm not a real woman, or I'm not a real sistah. Damned either way. It hasn't been that long since I chafed at a similar double standard for singles, at least those who lead zippy, independent, urban lives: If you're not married, something's wrong with you, but if you want to get married, something's wrong with you. Weirdo spinster, or retro turncoat: Those are your options. And, as you see, the expectations, snap judgments and stereotypes (Bridget Jones! Bridezilla!) don't go away when you're married (Biological Time Bomb!). Honestly, it can make a girl defensive, stressed out, pissed off and hardly in the mood for champagne and candles. No wonder it's hard to get pregnant. No wonder, that is, there's a market for Conceive.