Ode to an Ol' Dirty Bastard

He left behind a violent legacy and possibly a dozen children. But the Wu-Tang Clan rapper also helped forge an irresistible pan-Asian-ghetto-gangsta style. 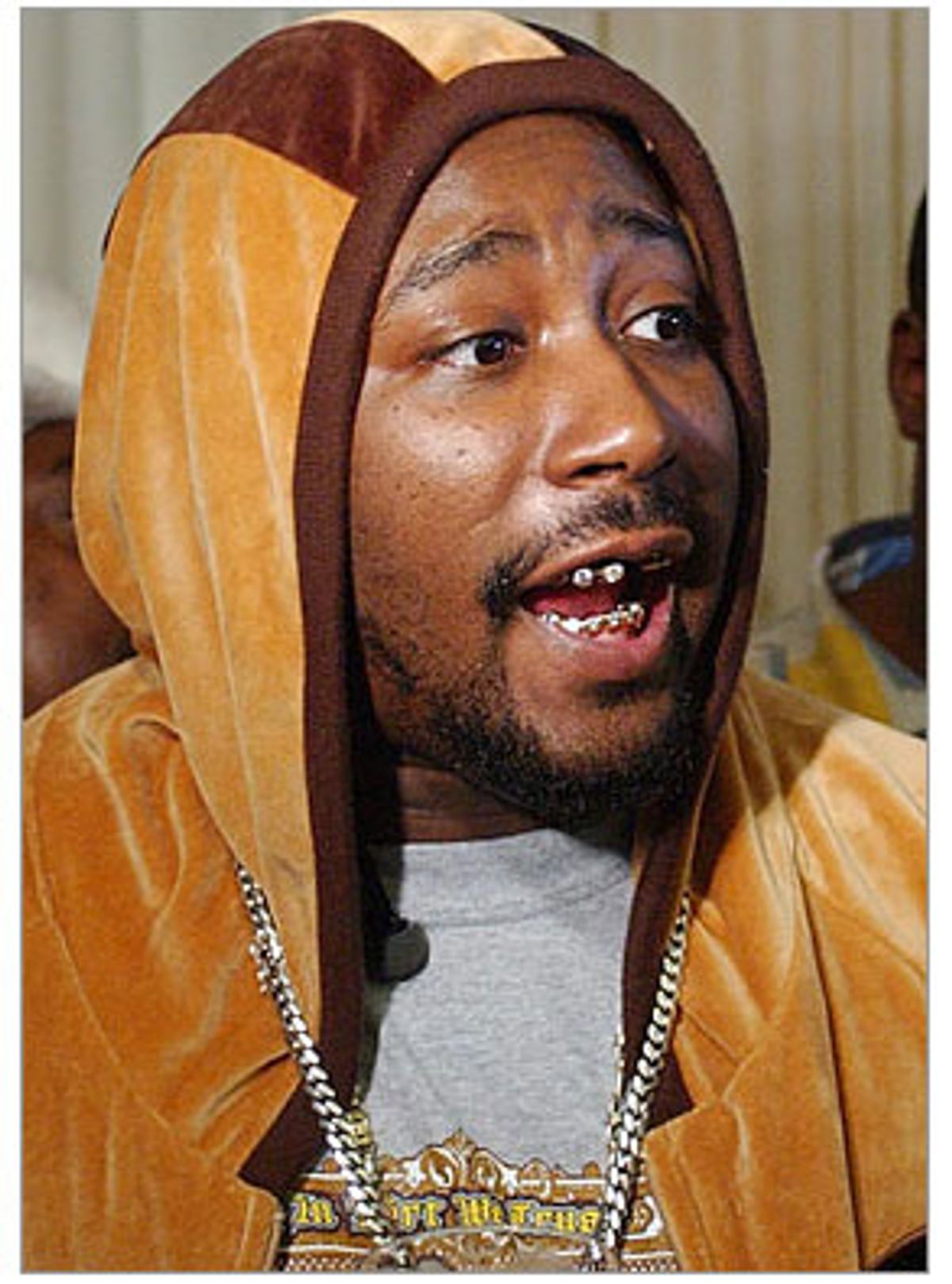 Outrageous. Unpredictable. Deranged, possibly. Irresponsible, certainly. But I don't care what anybody says. Ol' Dirty Bastard was avant-garde as hell.

"Avant-garde" was originally a military term, referring to an advanced group forging an assault on the enemy ahead. And O.D.B., whose given name was Russell Tyrone Jones, and his fellow members of the Wu-Tang Clan were way ahead of the rest -- a radically unique collection of some of the most charismatic and creative rappers ever to rhyme two lines. Their 1993 album, "Enter the Wu-Tang: 36 Chambers," not only did more for Timberland boots and black ski masks than any corporate ad campaign ever could, but put East Coast rap firmly back on the map, a full year before Puff Daddy and Bad Boy Records wrested the mike away from the West Coast's Dr. Dre, Snoop Dogg and Suge Knight's Death Row Records.

Wu-Tang artists RZA, GZA (Robert Diggs and Gary Grice, cousins to Jones), Method Man, Raekwon and Ghostface, among others, went on to have solo album success both critically and commercially, and the Wu were among the first groups to get involved in the licensed hip-hop fashion bonanza with their label, Wu-Wear.

But what made the Wu-Tang Clan -- named in honor of the Wu-Tang school of sword fighting featured in the kung fu flicks so idolized by the rap group's members -- truly brilliant was their vibrant, irresistible aesthetic. Hip-hop always had its thugs, even thugs who wrote rhymes employing complex verse structures. But thugs who spliced arcane mythologies with intricately constructed, Asian-gothic beats with kung fu movie audio samples were a new phenomenon. Their self-mythologizing and pop culture referencing (preceded by Run D.M.C.'s shelltoe Adidas/gold rope chain aesthetic) came long before Quentin Tarantino exploited his love of Asian "grindhouse" cinema in "Kill Bill," Vol. 1 and 2, which were, incidentally, scored by the RZA.

Wu-Tang hailed from Staten Island, and the tiny, oft-forgotten part of New York was transformed into Shaolin Island in their pan-Asian-ghetto-gangsta conception. Their radio-ready aesthetic evoked the nostalgia of Saturday afternoons spent embroiled in heady chop-socky dramas like "Five Deadly Venoms" or "Shaolin Temple II." And it gave these gifted personalities their own individual legends, built out of a hybridized Afro-Asian folklore.

O.D.B., who died of as yet undetermined causes in a recording studio in Manhattan on Saturday, was an integral part of that aesthetic. Even in a group that featured larger-than-life personas, like the now near-ubiquitous(ly high) Method Man, or the GZA's labyrinthine verse stylings, saying that O.D.B. managed to distinguish himself is a massive understatement. He was called Ol' Dirty Bastard because, as stated in an interlude on "36 Chambers," "There ain't no father to his style."

Ol' Dirty's gold-toothed, marble-mouthed, free-associative nonsense raps ran in topic from not-so-subtle threats ("Do you wanna get your teeth knocked the fuck out?") to wistful remembrances of lost love and its painful aftermath ("Burn me/ I get into shit/ I let it out like diarrhea/ got burned once/ but that was only gonohrrea"). He wrote rhymes for the ladies too. Almost always playful -- which was whenever he wasn't inviting muthafuckas to step to him on his "Brooklyn Zoo" turf -- O.D.B. famously rapped, "Me and Mariah/ go back like babies with pacifiers," in a duet with Mariah Carey from 1995's "Fantasy" (the remixed Tom Tom Club track). O.D.B. also saw his biggest hit come as a result of matching his gravelly tones with the sweet sounds of Kelis and a showy Neptunes beat on "Got Your Money," off of his 1999 album, "Nigga Please."

Raw energy loosed in lyrical form, O.D.B. had no qualms about singing -- well, murdering -- melodies in his songs, continuing in the fine tradition of notoriously off-key soloist and rap legend Biz Markie. It's a tradition that has survived to today with Kanye West, André 3000, Mos Def and Pharrell Williams offering pitch-unperfect, but heartfelt, recordings.

As a performer, he was our raging, amphetamined id whose "non-style" of sorts reminds me of a classic James Brown lyric: "I don't know karate, but I know c-razy." O.D.B. knew crazy. He was the personification of the phrase "I just don't give a fuck" long before Eminem had any claim to it, and O.D.B.'s trademark growl made it OK for rapper DMX to bark his way through his albums, selling millions of records with each successive "Ruff, Ruff."

But such reckless disregard for any accepted conventions, especially those having to do with the law, will usually get you into trouble whenever you do step over the line. And O.D.B. was a habitual line-stepper.

In 1994, O.D.B. took MTV News cameras into a limousine with him and several of his kids (he was said to have more than a dozen, by numerous mothers, though his wife of 13 years, Icelene Jones, claims he only has three -- with her), and drove to a welfare office to collect food stamps.

Arrested in 1997 for failing to pay nearly a year's worth of child support for three children he had with his wife, O.D.B.'s rap sheet would get only longer. He pleaded guilty to attempted assault on his wife in 1998, then two months later was shot in the back in what he claimed was a robbery of his Brooklyn home. Later that year he was arrested for shoplifting $50 sneakers in Virginia Beach, Va., and was charged with making "terrorist threats" at the House of Blues in Los Angeles.

In a wonderful media moment of raw honesty and perhaps a little intoxication, O.D.B. attended the 1998 Grammys and, disappointed that Wu-Tang lost out to Puffy for best rap album, grabbed the microphone from a stunned Shawn Colvin and addressed the crowd. "Please calm down," he said. "I went and bought me an outfit today that cost me a lot of money, because I figured that Wu-Tang was gonna win. I don't know how you all see it, but when it comes to the children, Wu-Tang is for the children. We teach the children. Puffy is good, but Wu-Tang is the best. I want you all to know that this is O.D.B., and I love you all, peace." The day before he had rescued a 4-year-old girl from a car wreck in Brooklyn.

Always a pioneer, O.D.B. became the first person arrested under a new California law that prevented convicted felons from wearing bulletproof vests in 1999. His legal troubles, particularly that year and beyond, were many -- and certainly not to be glorified or glamorized -- but he did manage to carry off some of these with a certain amount of panache. In October 2000, O.D.B. chose to escape from custody while being transported to court from a Pasadena, Calif., rehab center, but true to his iconoclast form, he didn't keep a low profile like any ol' fugitive. He not only recorded part of an album with RZA, but also appeared onstage to perform with the rest of the Clan at New York's Hammerstein Ballroom in November 2000. He was finally arrested in the parking lot of a McDonald's in Philadelphia two nights later by an officer who recognized him because her son was a fan. He was later sentenced to two years behind bars in upstate New York.

Upon his release, he immediately signed with Roc-A-Fella Records and began work on a new album, which was nearing completion at the time of his passing.

Say what you want to say about O.D.B. He certainly would have said whatever the fuck he wanted to say about you. Perhaps his is a case where person and persona were too tightly wrapped up within one another; one certainly fed off the other, for better or worse. A lot of his behavior was pretty indefensible, but the energy and eccentricity he brought to hip-hop will be missed -- and nearly impossible to replace -- as a result of his tragically young death. He would have been 36 years old Monday.

What more can say about O.D.B., Ol' Dirty, Osirus, Joe Bannanas [sic], Dirt Dog, Unique Ason, Dirt McGirt, or however the matchless Mr. Jones chooses to refer to himself in the afterlife. My personal favorite was Big Baby Jesus, a name that, to questions regarding its provenance, he explained, "I always been Jesus. I don't know what the big secret's been all these years." In fact, maybe it's better to let him speak for himself one last time, from the intro to his first solo album, in all his proudly ignoble glory:

"My name is Mr. Russell Jones. 'Scuse me for that one, I had to let that one loose. Tonight, you're gonna see something that you've never seen before. Something that nobody in the history of rap ever set they self to do. This fucking guy that I speak to you about is something crazy, he's something insane. He's the greatest performer ever since. Uh. James Brown. He's bad, and he's a cool guy, and you need to really get to know him. Ladies and gentlemen, from all houses to all towns. From the Moon, to Pluto, back down to Earth. Ladies and gentlemen, one more time, give it up, for the Ol' Dirty Doggie. I mean, the Ol'. Dirty. Bastard. I love that guy."