We've got same-sex marriage, medical marijuana -- and, hey, 80 percent of us think Bush runs a rogue nation! But I'd better warn you -- we're not as blue as you think. 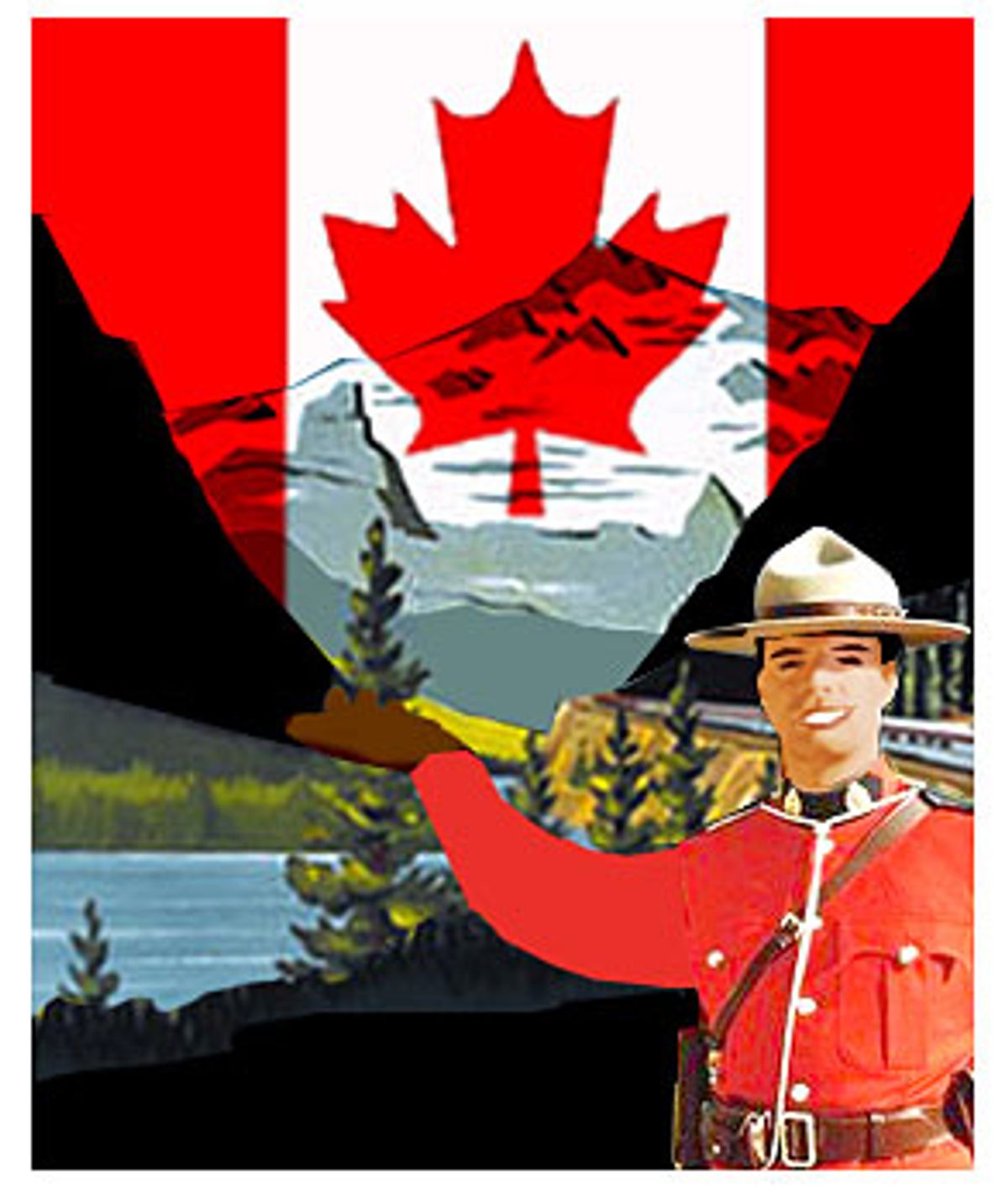 Hey, sure, no problem, the couch pulls out and it's yours whenever you show up. But so many of you are dreaming of leaving America for the biggest, bluest state of all, Canada, I figured I'd offer a little orientation. I know, we've been out of touch too long. Can you believe it? It's been more than a dozen years since my partner landed that cushy professorship in Vancouver and we transplanted here from San Francisco. But sometimes it takes a little thing like an electoral disaster to put old friends back in touch.

Anyway, your sudden interest in your northern neighbor has not gone unnoticed up here. We've all seen that cute map showing "The United States of Canada," combining your blue states and Canada and cutting loose the red states of "Jesusland." We did note that Canada's main immigration Web site got swamped by U.S. traffic when Bush won. And just yesterday the CBC (sorta like NPR) reported that a local law firm, its phone ringing off the hook, is "planning how-to-come-to-Canada seminars" for "Bush refugees."

Prepare to be welcomed with open arms. Literally, in the case of Marry an American, a wry Web concoction by the editors of Toronto-based This Magazine. Sample: "If George W. Bush is re-elected, single, sexy, American liberals -- already a threatened species -- will be desperate to escape. These lonely, afraid (did we mention really hot?) progressives will need a safe haven. You can help. Open your heart, and your home. Marry an American."

Before you pack up the Prius for that endless ski vacation, though, I should warn you. When it comes to political struggle up here, it's not like you're going to get a lot of R&R. But more about that in a minute.

No doubt, Canadians feel your pain. Two-thirds of them, according to a Time magazine Canada poll, believed your choice of president would affect their lives at least as much as the election of their own prime minister. And two-thirds were pulling for Kerry versus 19 percent for Bush.

So now that the deed is done, no need to be polite about Dubya around Canadians. Nearly eight out of 10 here say he runs "a rogue nation," and most adults under 35 believe America has become "a force for evil in the world," according to another October poll (this one conducted by the Dominion Institute and the Canadian Defence and Foreign Affairs Institute, and reported by the Canwest news service). Global warming, AIDS, even SARS, are more scary to Canadians than terrorism, the survey found. The vast majority would rather spend new tax money on healthcare and education than the military, and 40 percent think Switzerland has it right: "focus on being a great place to live rather than working on international issues."

How blue can you get, eh?

Can I mention a sensitive name? Ralph Nader likes us so much he wrote a book called "Canada Firsts," chockablock with Canadian achievements. Guess who invented the first publicly owned utility, the first credit union, the first social club, the variable pitch propeller, pabulum, standard time and the first rotary snowplow? Better believe it.

Along the way, Canada also developed its own political culture, the one you find so alluring just now. Politics is a hardball sport here, make no mistake, but the voter spectators aren't driven plumb nuts by the game. Part of the reason is the parliamentary system, where the parties and their platforms outweigh cults of personality.

Part of the reason, too, may be a different rural history. In America's hinterlands, the famous "paranoid style" of politics has been stoked into blazing fear and resentment. But not nearly so much across the Canadian prairies, which historically have given rise to great, empowering cooperative movements. Universal healthcare up here started in Saskatchewan's wheat basket. It's the philosophical cousin to the Wheat Pool co-op and the chicken growers' cartel that makes me pay 10 bucks for a scrawny fryer -- but it keeps the lights on in Moose Jaw.

Whatever the reasons, "the central difference" between Canada and the United States, writes political philosopher Joseph Heath, "is that the majority of Canadians have no ideological opposition to government."

Heath's book "The Efficient Society" is his attempt to explain why, year after year, the U.N. Human Development Index ranks Canada among the tiptop nations on earth to live, well ahead of America in most respects. "We do not love the state, but neither do we fear it. Thus we get all the benefits of a loosely regulated economy while also enjoying the massive improvements in social welfare that can be organized and delivered only by government. This has proven to be a winning formula."

Boring, I know. Except Canada keeps cranking out social experiments way too daring for Americans. Same-sex marriage? Legal in six provinces. Guns? Gotta be licensed and registered. Kyoto? Check. Executing prisoners? No way. School funding? Tying that to local property taxes would be illogical, so poor neighborhoods get the same school funding as rich ones, or more. Cannabis? Canada was the first nation to allow marijuana as medicine, and our Senate says pot should be legal. Heroin? Um, I go by a government-funded safe-injection site on the way to work every day in downtown Vancouver. Soon a trial experiment prescribing the stuff to hardcore addicts will be underway.

Still bored? What if I told you the crack smokers are jealous? They want their own safe smoking rooms and have organized a protest.

Maybe you figure the reason you didn't hear so much about this before is that Canadians are famously self-effacing. Don't believe it. Michael Ignatieff, the international affairs darling of the New York Times and a Canadian now roosting at Harvard, boasts that his home and native land has, of all the nations on earth, done the best at solving civil unrest by negotiating the delicate balance between group rights and individual ones.

And Joseph Heath hardly holds back. Canada isn't just the efficient society. It is "perhaps the most efficient on Earth," which is why "life in Canada is so good." It's a hot brand these days, Cool Canada, sold by a slick new Web site called CanadianAlternative.com. Its slogan: "Progressive. Prosperous. Inclusive. Feel at home in Canada."

I guess what I'm driving at is, when you get here, don't bring the typical American attitude that I hastily unpacked and wore to social gatherings. I'm talking about believing Canada is lucky to have you. Your American pluck, verve, swagger, whatever. It doesn't wear well, especially now that Bush has worn it out. A more Canadian credo: Power grows out of a barrel of passive aggression. As the new Yank in town, your route to popularity lies in just making a lot of fun of your backward origins and expressing a latent but suddenly blossoming fascination with hockey.

Don't point out, either, Canada's complicity in America's global reach. To harp on the fact that Canada depends on America to buy more of its exports than anyone else, or that America's massive military has, in unseemly ways, enforced global economic arrangements that benefit Canada is to really cast a pall over a salmon barbecue party.

It's kind of embarrassing for Canadians that they buy a lot of their military gear secondhand (a rusty old submarine fobbed off on them by the Brits recently caught fire, killing a sailor off the U.K.) And, true, by leaving it to America to run up the big weapons tab, Canada has forfeited much chance of being a real player when the world gets carved up at the big security summits. But then, that leaves a hell of a lot of public funds for spending more, er, efficiently on that ongoing Switzerlandization project.

I guess the last point I'd make, despite all the exciting stuff at the top of this note, is that I hope you're not expecting to arrive here and settle into some kind of relaxing political hot tub. It's more like ice fishing a tad too late in the spring. The bluish surface keeps shifting beneath your feet, and you never can feel sure it's not about to give way.

Canada's got its right-wing media barons, its right-wing think tanks, its tax revolters and Bible Belters. Its biggest province by far, Ontario, is digging out from a nine-year neoconservative reign sold as "the Common Sense Revolution," which left infrastructure crumbling, social programs slashed, homeless ranks swelling after welfare rolls were purged. Even before that, if you didn't like Reagan, you wouldn't have liked his Irish conservative soul mate of the same era, Prime Minister Brian Mulroney.

When I moved to British Columbia in 1992, imagine my surprise that the birthplace of Greenpeace had elected as its leader a Christian fundamentalist who owned a theme park called Fantasy Gardens. Scandal cleared the way for his replacement: a real live social democratic government. For a decade, the New Democrats survived relentlessly negative media, infighting and a rough economy until scandal cleared the way for a neoconservative government. Which immediately plunged itself into massive debt by issuing a huge tax cut to the rich. Sound familiar?

Over the last three years, I, California child of Reagan, have been forced to endure Laffer curve déjà vu, to watch British Columbia's true-believer neocons hand over publicly owned, profitable assets, including a whole railroad, to private companies, many of them with names you will recognize, for many are American. Homeless and food-bank numbers are up, and B.C.'s "Super Natural" forests are being mowed down at a record rate, their raw logs shipped posthaste south of the border to U.S. mills.

"It's like going from Texas to Sweden to Texas," I told mystified American friends on a recent visit. "I'm developing political whiplash."

So no, don't arrive here expecting refuge from the battles waged and lost so devastatingly this time around in the United States of America. The same battles rage, in their own Canadian way, right here. And the fate of the American expat can be to feel like the canary in the coal mine, constantly wanting to sound the alarm that Canadians, having made such precious gains, seem determined to fumble them away out of restlessness, inattention or pique.

Tempering that cold reality (and did I mention Canada can be damn cold?) is a spirit more deliberative, more accommodating -- yes, more civil -- living in the Canadian political soul. It means that while Democrats search America today for any sign of hope, they would find in Canada many, many reasons for optimism.

Anyway, the key's under the mat. Get yourself a good lawyer and let yourself in.