Barriers are breaking down between British and American acting styles as stars like Johnny Depp, Claire Danes, and Samantha Morton embrace a dynamic naturalism. 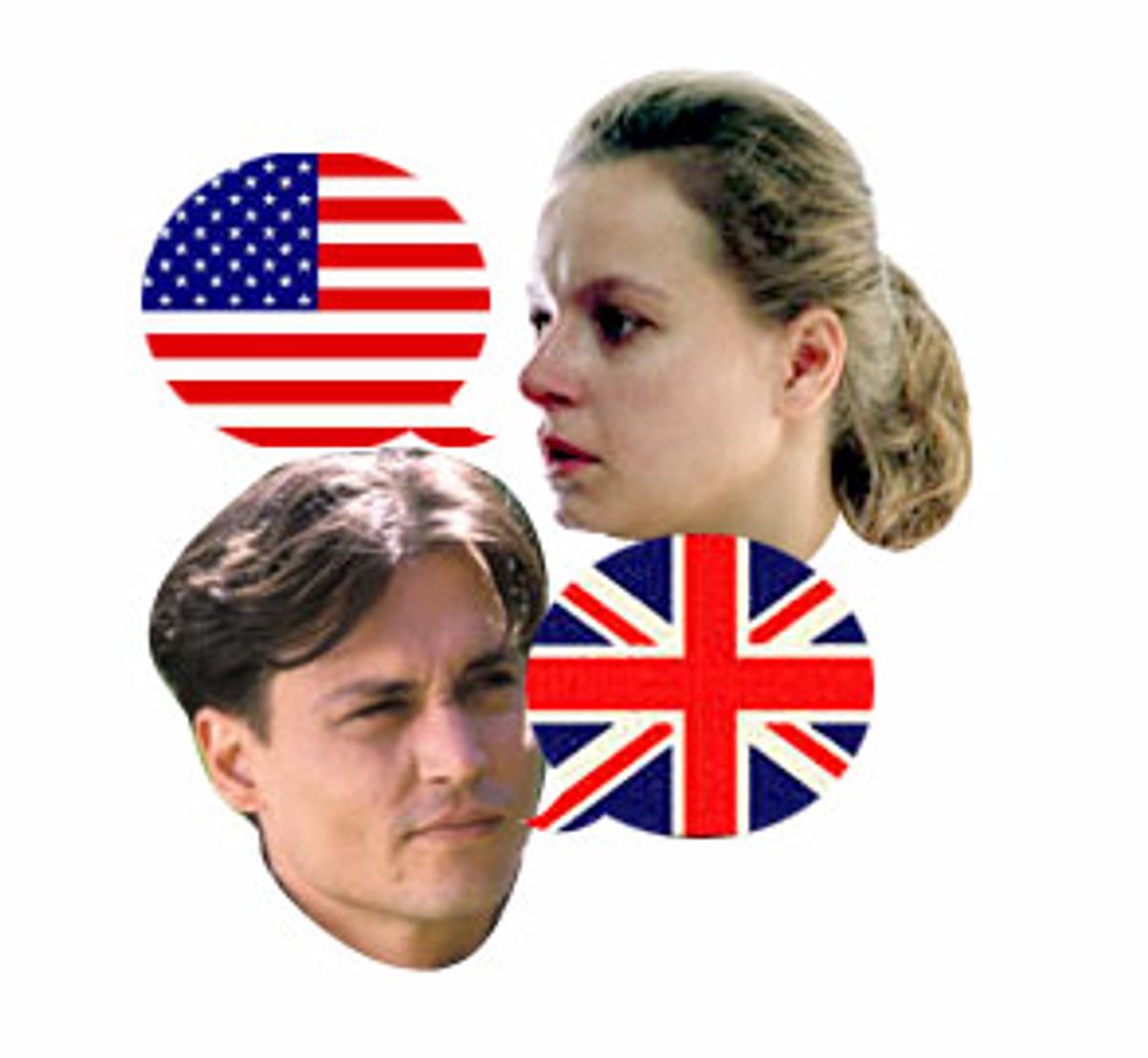 Just look at the way people talk about the accents.

Traditionally, when British actors play Americans, critics and moviegoers marvel over the realism and accuracy of their adopted Yank accents. And when you're listening to Bob Hoskins use the "whaddya know, whaddya say" voice he reserves for American roles, or the changes and irony Natasha Richardson rings on her flat Western accent as the title character in the 1988 film "Patty Hearst," there's reason to marvel.

Americans who play Brits aren't usually so lucky. Other than a New England accent (one of the hardest to pull off), no accent sets an actor up for criticism faster than a British accent. I can't think of one American actor playing British whose accent, no matter how good, hasn't been picked apart.

Accents -- and impeccable enunciation -- have bolstered the myth that British actors are superior to American actors. But the differences between British classical acting and American Method acting are eroding as a more uniform style, grounded in Method acting and its dedication to naturalism and emotional realism, takes precedence on both sides of the Atlantic.

Where did this idea that accents equal good acting come from anyway?

From the fetishization of technique, that's where. It's hard for Americans to detect anything that deserves to be called culture in their own country. So they're suckers for precise diction and stories about classical training. Marlon Brando is the greatest actor this country has ever produced, and yet it was common in his obituaries to see it considered a terrible tragedy that after playing Anthony in the 1953 film of "Julius Caesar" he never again ventured into the classics. If that was the pinnacle of Brando's career, where does "A Streetcar Named Desire" fit in? Or, for that matter, "On the Waterfront" or "The Godfather"?

Shakespeare is one yardstick for an actor, but it is not the only yardstick. The critic Steve Vineberg has argued that Laurence Olivier, in his performances as the crumbling vaudevillian Archie Rice in John Osborne's play and 1960 film "The Entertainer" and as Othello in the 1965 film of the Shakespeare tragedy, came as close as anyone has to blurring the lines between British classical acting and American Method acting.

I'd add to that Daniel Day Lewis' performance as Christy Brown in 1989's "My Left Foot," in which the technique he brought to the role was secondary to his portrayal of Brown's emotional life. And certainly the explosion of writing, directing and acting talent that came about from the Angry Young Man movement in British theater and film in the '50s, and the work done by director Joan Littlewood, roughened up the traditions of British acting.

A more recent sign that the barriers separating British and American acting styles are growing shakier is the number of Americans appearing as Brits in current movies, accents -- good or bad -- be damned: Annette Bening in "Being Julia"; Billy Crudup and Claire Danes in "Stage Beauty"; Johnny Depp as J.M. Barrie (OK, he was Scottish) in "Finding Neverland"; Renée Zellweger having her second go-round as Bridget Jones (a casting choice that outraged the novel's British fans). A better sign is that much of the finest recent British acting -- the work being done by Samantha Morton, Clive Owen, Colin Farrell (OK, he's Irish), Naomie Harris, Ewan McGregor (OK, he's Scottish, too) and many others -- appears to be derived less from what we think of as classical British style, than from the Method-influenced work of American actors.

The single most concentrated dose of Method-influenced British acting can be found in the work of director Mike Leigh, which derives from caricature and sketch-style revue. The techniques Leigh has been using for years -- giving his actors information on their characters and then creating the scenes of his films based on the improvisations they create -- are very nearly Method. The best performances in his later films -- Jane Horrocks in "Life Is Sweet," Brenda Blethyn in "Secrets and Lies," Timothy Spall in "All or Nothing" -- straddle caricature and naturalism.

Even though it falls apart midway through, Leigh's latest film, "Vera Drake," is stuffed to bursting with good acting. Leigh's caricature can fall into crudeness when he doesn't like one of the characters he's put on-screen (as with Heather Craney's grasping bourgeois housewife). But he's also capable of making caricature subtle and delicate, as in the performances of Alex Kelly and Eddie Marsan who, as a courting couple, are like shy young versions of Peggotty and Barkis from "David Copperfield."

And the performances of Imelda Staunton in "Vera Drake's" title role and the marvelous, long-faced Phil Davis as her devoted husband, Stan, are very hard to imagine without the naturalistic traditions of the Method behind them. Much of what they do consists of the most banal tasks -- greeting each other when they return home in the evening; having their supper; sitting in the cramped parlor while Stan reads the paper or listens to the wireless and Vera tends to some household task. But everything is believable, at home in their tiny London apartment and with each other. Davis and Staunton create the characters from the inside out, connect each moment to every other moment, make these people part of a believable world.

That's a brief but fair description of what the still misunderstood aims of Method acting are. Just how commonly misunderstood is evident in a story about Liam Neeson that recently appeared in the New York Times. "Mr. Neeson is no Method actor," writes Dinitia Smith who then quotes Neeson to illustrate the claim: "I do believe at the end of the night when you're with your family the character gets hung up on the door like a coat, and is there to be taken on the next morning." This is the common misconception that Method acting means "becoming your character."

No. Becoming your character is schizophrenia. In spite of the Freudian conjuring that Method acting is presumed to be half of the time, or the self-indulgence it's presumed to be the other half, much of Method acting is just common sense. The Method is a means for realizing that the character you are playing has a history, both immediate and long-term, and bringing that history to bear on the performance, in the same way that all of us carry our experience with us in everything we do.

For instance, a man walks into a room from outside. A Method actor would ask, Where is the man coming from? How did he get here? Did he drive? Was there traffic? Did he walk? How far? Is it cold or hot out? Is this his home? Who else is in the room? Is the man glad to see those people or not? Is he alone? Is he expecting someone? All of those things affect how we would walk into a room in real life. The Method argues they should be no less considered when playing a character. In the most simplistic terms, it's building a character from the inside out, finding an internal logic for external action.

That logic is an integral part of Johnny Depp's performance as J.M. Barrie in "Finding Neverland," the story of the playwright's friendship with the children who inspired him to write "Peter Pan." "Finding Neverland" is a flawed movie directed by Marc Forster ("Monster's Ball") in an obvious manner that makes its "power of imagination" theme unnecessarily icky. But at its best "Finding Neverland" is a demonstration of how American and British acting have dovetailed. The actors play together so well that there is no disjunction watching Johnny Depp and Dustin Hoffman (better than he's been in a while) share scenes with Julie Christie and Kate Winslet.

What Depp brings to the role -- the grace that can make him seem the gentlest of actors (this may be the first movie Julie Christie has appeared in where she isn't the most poetic actor on-screen) -- is as important as what he leaves out: the portentousness that actors use to announce that they are playing Important Men. That is a particular pitfall of period pictures and bio films, and it always has the effect of putting the character on a pedestal -- and at a distance from the audience. Depp gives a becomingly modest performance and he pulls a lovely twist on the way fantasists are usually drawn. Instead of retreating into his own world, Depp's Barrie, who loves people, attempts to take others back there with him. It's a role that would flounder if played in the traditional Great Men of History style, and Depp brings it a lyrical directness.

But the most startling meeting of British and American styles is at the end of Richard Eyre's "Stage Beauty," his wonderfully entertaining and raunchy comedy about how actors meld with their roles. In the finale, Billy Crudup, as a drag actor making his first appearance onstage as a man, and Clare Danes, as his dresser, taking advantage of the new Restoration rules allowing women to appear onstage, act out a visceral, frightening version of Othello's murder of Desdemona. Their performance stands in marked contrast to what the movie has shown to be the Restoration's florid acting style: poses affected to elicit the audience's adoration.

The scene has been criticized for being an anachronistic intrusion of Method acting onto the Restoration stage. Those critics are right: The acting is both anachronistic and Method. They are also missing the point.

Rehearsing the scene, Crudup directs Danes not to make the emotion and the logic of the scene subservient to the verse. What's being dramatized, he reminds her, is murder born out of jealous rage. Some of the lines will be screamed, some whimpered. These might all be elementary points if the play being performed weren't Shakespeare.

Has there been any artist of comparable greatness who has had more potential audiences scared away from him by people extolling his magnificence? How many teachers have ruined Shakespeare for their students by blathering on about the majesty of his poetry before they have given them the means to understand it as dialogue?

In its own way, the scene is saying that greatness by itself isn't enough. There's a surprising amount of anger in the scene. It's as if the actors are honing the hatred in the scene they are playing to direct it at anyone and anything who would sap the vitality of this work. That the movie is directed by Richard Eyre, a veteran British stage director, means that he shares that anger. The scene's approximation of Method acting is meant to act as a bit of foreshadowing of the acting that would be necessary to throw off the stultifying air that can entomb any artifact of high culture. It's a nice and unexpected hands-across-the-water moment: an example of the immediacy that isn't exclusive to any one country.