John Ashcroft's war on terrorism has done enormous damage to our liberties -- and he has few tangible results to show for it. 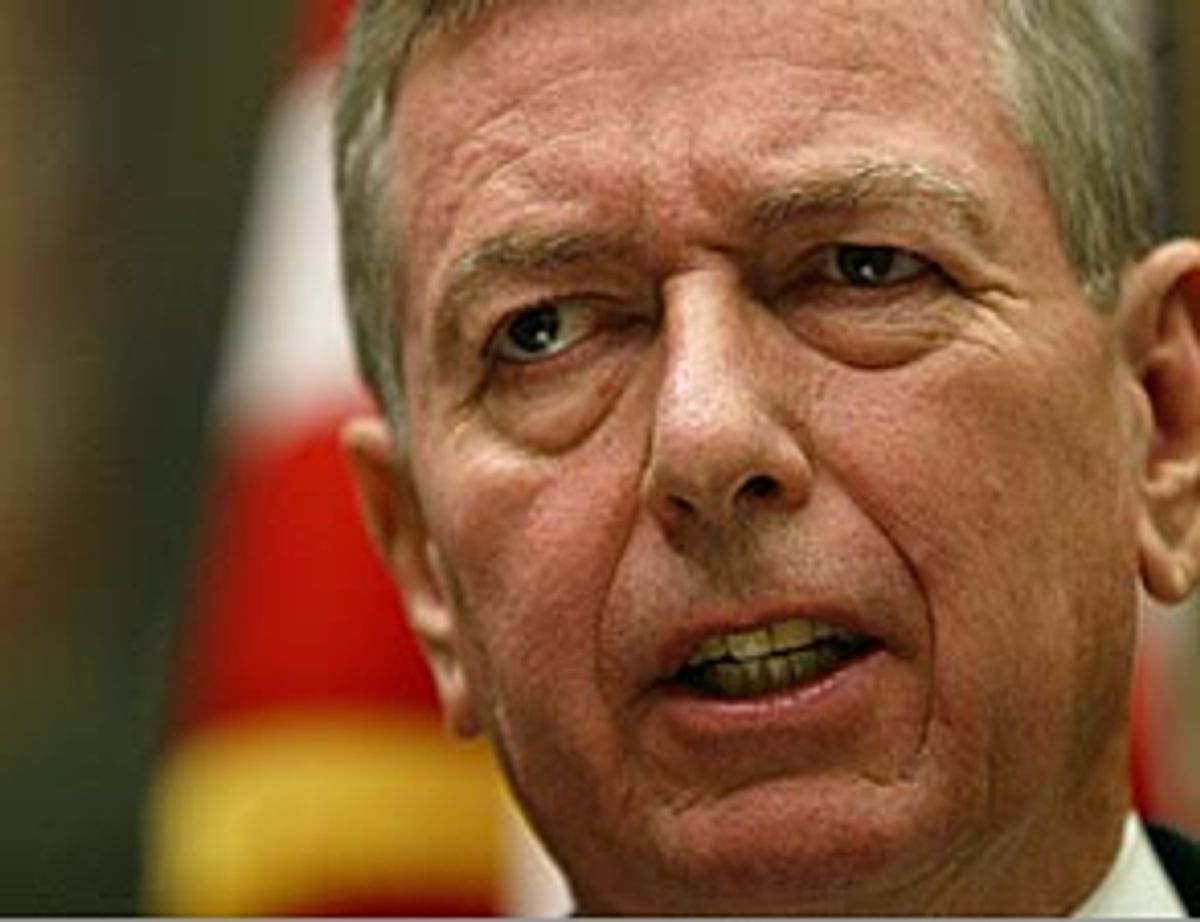 Being John Ashcroft apparently means never having to say you're sorry. On Nov. 10, the attorney general congratulated himself in a farewell letter "to the American people" with this assessment: "I am blessed to leave public office in a nation that is safer and stronger than the one I found; a nation in which the flame of freedom illuminates every American and burns a signal fire to a watching world." In fact, there is little reason to believe Ashcroft's claim that the nation is safer and stronger; file boxes of evidence to demonstrate that if the "flame of freedom" still burns, it is despite Ashcroft's efforts, not because of them; and every indication that the "signal fire" America is sending to the "watching world" is not one of freedom.

Whether Alberto Gonzales, nominated to be Ashcroft's replacement, can set us on the road to recovery is now a critical question. Unfortunately, the damage is already so deep that there is little reason for optimism.

Consider first the state of freedom at home. With the possible exception of the right to bear arms, it is difficult to name a constitutional guarantee that Ashcroft did not trample upon.

The right to liberty itself has given way to mass preventive detention, effected through pretextual law enforcement, abuse of the material-witness authority and designation of detainees as "enemy combatants." Ashcroft oversaw the preventive detention of more than 5,000 foreign nationals in anti-terrorism initiatives in the United States after Sept. 11, 2001, mostly on immigration charges. Many were arrested in secret, without charges, held without any evidence that they were dangerous or a flight risk, denied access to lawyers and the courts, tried in secret immigration hearings, physically beaten by guards, and held for months even after their immigration cases were fully resolved.

Privacy has become an endangered species with the passage of Ashcroft's USA PATRIOT Act. That law allows the government to obtain records from any business, school or library on U.S. citizens, without showing that they are suspected of criminal activity, and frees the government in many criminal investigations from the bedrock constitutional protection for privacy -- namely, the requirement that it establish probable cause of criminal activity before it searches a home or taps a phone.

The right of assembly must now be exercised knowing that the attorney general has unleashed the FBI to spy on political and religious gatherings even where there is no reason to believe that any criminal conduct is being planned or advocated. And just as Ashcroft famously equated criticism of his efforts with treason, his FBI equated antiwar rallies with terrorism. In October 2003 it issued a "terrorism" bulletin alerting local law enforcement agencies to "be alert to ... indicators of protest activity" by antiwar demonstrators -- including such subversive tactics as the use of the Internet to raise funds and organize.

Political freedom has fallen prey to prosecutions for "material support" to proscribed "terrorist organizations," the modern-day version of the McCarthy-era tactic of guilt by association. Virtually all the cases in which the Justice Department has actually brought a "terrorism" charge allege not terrorist activity as such, but support to a proscribed group. Under this statute, the department prosecuted Saudi student Sami Al-Hussayen for doing nothing more than running a Web site that had links to other Web sites that in turn included incendiary speeches by Muslim clerics. A jury in Idaho, where notions of free speech apparently still hold sway, unanimously acquitted Al-Hussayen on all terrorism charges.

The right to a lawyer, critical to the protection of all other rights, has been denied outright to enemy combatants, intentionally obstructed for immigration detainees and interfered with in unprecedented fashion by Ashcroft's order authorizing agents to listen in on attorney-client conversations of suspected terrorists in prison without judicial approval, and without probable cause to believe the conversation is furthering any criminal activity.

Finally, and perhaps most disturbing, Ashcroft launched the most extensive campaign of ethnic profiling this country has seen since World War II. He did not intern 110,000 people for their ethnicity, as we did then, but he did call in 80,000 for registration, fingerprinting and interviews simply because they came from Arab and Muslim countries, and sought out 8,000 more for FBI interviews on the same basis. Virtually all the 5,000 detained foreign nationals were Arab or Muslim, and according to Ashcroft's own inspector general, some were picked up for little more than their ethnicity, as when the FBI arrested individuals based solely on a tip that there were "too many Middle Eastern men" working in a convenience store.

But, Ashcroft supporters will respond, there have been no terrorist attacks on U.S. soil since Sept. 11. In his letter to the American people, Ashcroft thanks the Lord -- "the Builder of our city and the Author of our freedom" -- for this fact. There's certainly more reason to thank him than Ashcroft.

Of the more than 5,000 foreign nationals detained in anti-terrorism measures, not a single one stands convicted of any terrorist offense. On preventive detention, Ashcroft's record is zero for 5,000. Nor did he find a single terrorist among the 80,000 Arabs and Muslims called in for registration, or the 8,000 sought out for FBI interviews.

Ashcroft boasts that he deported more than 500 people in connection with these efforts. But his policy was not to deport individuals until they were cleared of any connection to terrorism. So these are misses, not hits, in finding actual terrorists.

He also claims that his terrorism investigations led to 368 criminal indictments and 194 convictions. What he doesn't say is that all but a handful of the convictions were for petty offenses, not terrorism charges. A Syracuse University study found that the median sentence actually handed down in cases labeled "terrorist" by the Justice Department in the first two years after 9/11 was 14 days -- not the kind of sentence you'd expect for a terrorist.

And where are the al-Qaida sleeper cells that prompted the aggressive sweeps in the first place? The closest thing Ashcroft can point to are six young men from Lackawanna, N.Y., who followed a charismatic religious leader to an al-Qaida training camp in Afghanistan, but returned to the United States showing no interest in terrorism and undertook no activity whatsoever in furtherance of even a petty crime, much less a terrorist plot.

The only criminal conviction involving an actual terrorist incident that Ashcroft can cite is that of shoe bomber Richard Reid, and he was captured not by anything the government did but simply because an alert flight attendant noticed a strange-looking man trying to light his shoe.

So Ashcroft can point to few tangible results from his war on terrorism. Whether attackers have been deterred is unknowable, but if Ashcroft's efforts had actually identified real terrorists, one would expect to see them prosecuted, and we don't. While the Justice Department implemented many sensible reforms -- including increased border and airport security, more resources and attention directed at terrorism, and better information sharing -- those reforms would have been adopted by anyone in office on Sept. 12, 2001.

Of most concern from a security perspective, Ashcroft's sledgehammer tactics have sparked a backlash of resentment, here and abroad, which has in turn made us substantially less safe. Anti-Americanism is at an all-time high, and one of the central complaints that fuels it is bitterness at how the rule of law has been abused in the war on terrorism, especially when it comes to foreign nationals. That unprecedented worldwide animus poses the greatest threat to our national security in the years to come. And for that, we have Ashcroft, not the Lord, to thank.

Ashcroft's legacy has been to make us both less safe and less free, fulfilling Ben Franklin's prophecy that those who sacrifice essential liberty for security deserve neither. Yet the attorney general's attitude in the face of all this is perhaps best captured in the Justice Department's immediate response to its own inspector general's findings, in June 2002, that the department had brutally abused the rights of hundreds of immigrants in the sweeps that followed Sept. 11, and that none of the individuals rounded up had turned out to be terrorists: "We make no apologies."

As for Gonzales, there is little reason to think he'll change course. After all, he made Ashcroft look like a moderate in the administration's internal debates over military tribunals, and dismissed the Geneva Conventions as "quaint" and "obsolete" in a memo to President Bush urging him to deny prisoner-of-war protections to those detained at Guantánamo Bay, Cuba. Gonzales requested the infamous Justice Department memo of August 2002, a detailed guide to how to torture and get away with it, and only repudiated it nearly two years later, after the Abu Ghraib scandal, and after the memo was leaked.

As my colleague and former Bush administration insider Viet Dinh said, Gonzales will "differ in tone but not in substance" from his predecessor. Unfortunately, we need much more than a change in key.