An invisible treasure map on the back of the Declaration of Independence? If only that were the most credibility-straining thing about this picture! 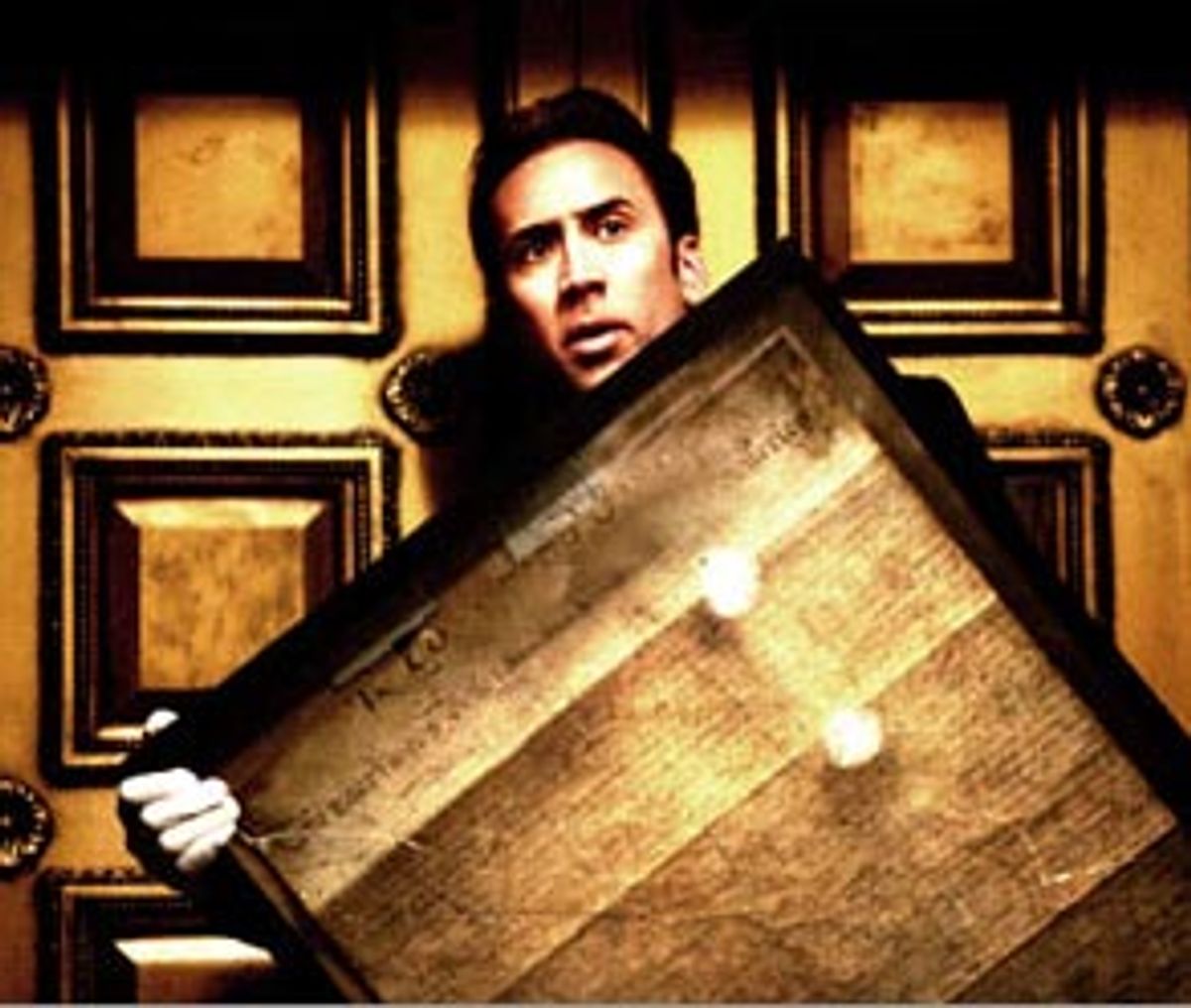 In "National Treasure," Nicolas Cage plays Ben Gates, a history buff who's convinced there's an invisible treasure map on the back of the Declaration of Independence. To find his way to the greatest riches known to mankind, all he needs are some Q-tips, a blow-dryer and a little lemon juice (paying close attention to those Encyclopedia Brown books sure paid off).

But first, Ben needs to steal the actual document -- not only that, but he needs to steal it in order to save it, because another treasure hunter (an evil one, played by Sean Bean) is after it too. And being an Englishman, this evil treasure hunter is likely to take the thing and crumple it into a careless little ball when he's done -- you really can't trust foreigners these days.

That's about all you need to know about the tepid caper that is Jon Turteltaub's "National Treasure," although if you're a history buff yourself, you'll also be thrilled by these reassuring words from the movie's press materials: "Behind the non-stop mystery and adventure of 'National Treasure' lies the inspiration of actual historical legends." Not just legends, but actual historical ones. Now there's authenticity for you.

Not that authenticity matters all that much in the movies. The bigger problem is the way "National Treasure" trundles along so laboriously. The picture (which was written by Jim Kouf and Cormac and Marianne Wibberly, from a story by Kouf, Oren Aviv and Charles Segars; it was produced by action-movie king bee Jerry Bruckheimer) pedals furiously from just north of the Arctic Circle to historic locations in Washington, Philadelphia and New York, but it never goes anywhere. Its high-gloss coating of patriotism is brittle and false: The characters in "National Treasure" pay lip service to the intrinsic value of the Declaration of Independence, but even the ones who are most respectful of it think nothing of rolling it up and unrolling it repeatedly as if it were a Farah Fawcett poster.

But if that's what you've got to do to locate the most valuable treasure the world has ever seen, well, that's what you do. This particular treasure is the actual real-life historically legendary Knights Templar Treasure, a giant jumble of Egyptian statuary, religious artifacts and assorted gold thingies assembled (the movie is too polite to even whisper the word "plundered") by a bunch of 11th century crusaders who, it is said, later became the secret society known as the Freemasons.

In the movie's vision, this great treasure made its way to North America sometime in the 18th century, where it was protected and hidden by our founding fathers, many of whom were Freemasons. When these Freemasons ran out of pockets in their little aprons, they needed to find a better place to store this treasure, but where? To find out, you'll have to suffer through "National Treasure" yourself.

Nicolas Cage used to give performances that were a pleasure to watch ("Moonstruck"), if not outright astonishing ("Leaving Las Vegas"). But in "National Treasure," he's on cruise control -- the only treasure at the end of this performance seems to be his paycheck. Diane Kruger (the wimpy Helen of "Troy") plays the flaxen-haired historical archivist who trails after Ben, presumably so we'll at least have someone pretty to look at. Jon Voight shows up as Ben's daddy, and Harvey Keitel plays a devilishly goateed FBI agent: They're the only two actors who seem to have a sense of how ridiculous "National Treasure" is, but there's not enough of them to carry the picture. "National Treasure" is both broad and bland -- as documents go, this one tastes like cardboard. Whatever you do, don't eat it.