The undersea candy colors and comic-strip doodliness of this big-screen version of the popular cartoon seem so right, they make the rest of the world seem wrong. 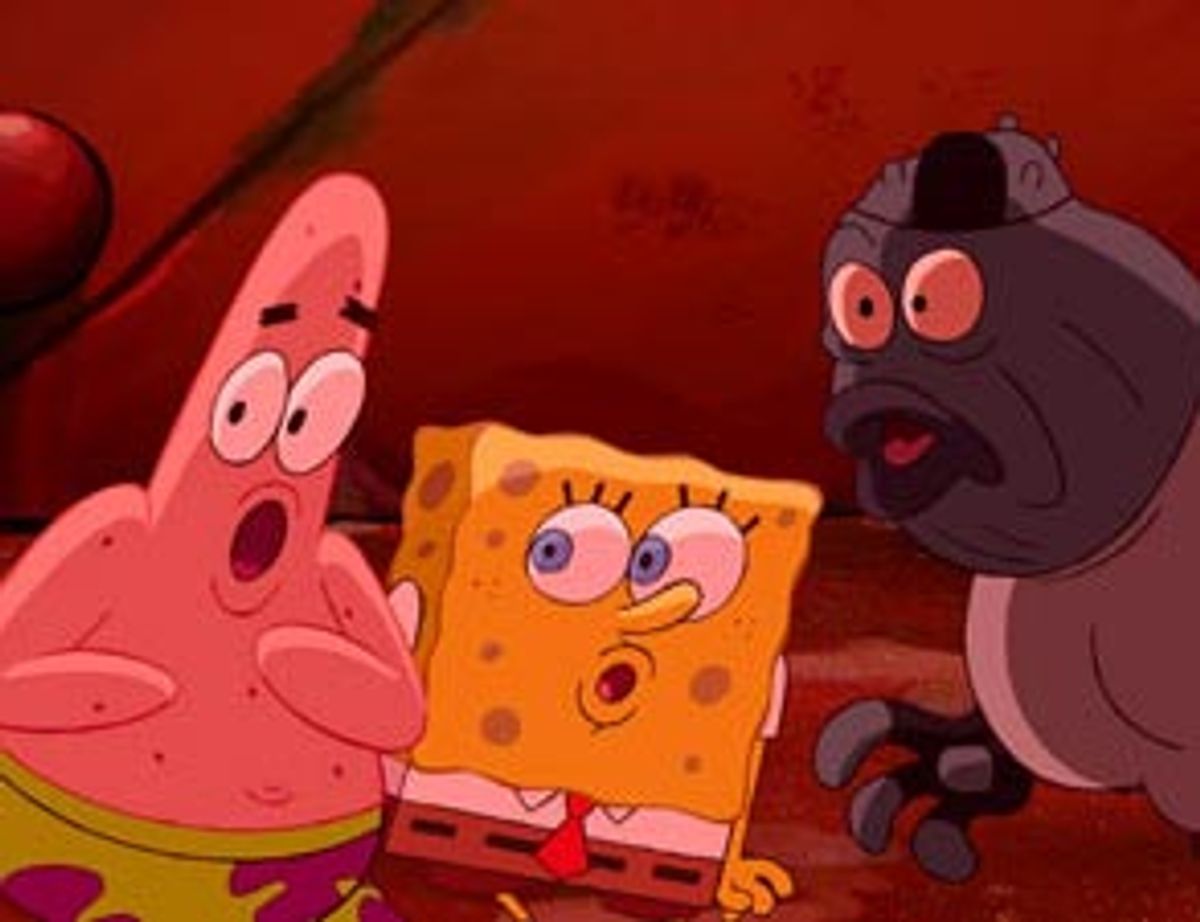 You may not realize you're suffering from visual-pun deprivation until you see Stephen Hillenburg's brilliantly unsubversive "The SpongeBob Squarepants Movie": Undersea ruler King Neptune (Jeffrey Tambor) has had his crown stolen, leaving his bald head embarrassingly naked. He commands one of his tiny servants to treat his gleaming dome with spray-on "Hair in a Can." The nervous underling misses his target and instead hits Neptune's eyeballs, which promptly sprout red-brown pompoms of fur. It's a moment of overwhelming dada clarity: The phrase "the hairy eyeball" suddenly makes sense.

If you're a parent who's dug "SpongeBob Squarepants" on television with your kid, you may be at a disadvantage when you see "The SpongeBob Squarepants Movie," partly because the mere presence of its sight gags will be nothing new to you, and also because, admittedly, one of the show's charms is its abbreviated lunacy: It has a zippety offhanded lightness that's hard to sustain in a 90-minute movie.

But what's remarkable about "The SpongeBob Squarepants Movie" is how much care Hillenburg and his crew of writers, animators and actors have taken to make it undeniably movielike. If I'd been overly familiar with the show before I saw the movie (I wasn't), I might have feared that its undersea candy colors and comic-strip doodliness wouldn't translate well visually to the big screen, the way the flat, deadpan planes of Beavis and Butthead lay sprawled like roadkill in "Beavis and Butthead Do America."

But without overburdening their appealing simplicity, Hillenburg and his team give the characters here -- which include, in case you didn't know, a bright yellow sponge in cardboard pants, a mite who's shaped like a sea cucumber with one giant, blinking eye, and a starfish with a tubby belly that's the ice-cream lovers' equivalent of a beer gut -- an appealing roundness, even though they're still staunchly 2-D.

The colors, among them unreal Japanese garden greens, purples, pinks, reds and golds, are more dimensional and shaded than on the show -- they pop off the screen just enough, without ever being assaultive. The colors and shapes of "The SpongeBob Squarepants Movie" never look as if they're trying too hard: They make you forget that as a grown-up, you're supposed to find modern animation disappointing compared with the pleasures so liberally doled out by the likes of Chuck Jones.

The unadulterated innocence of the SpongeBob character is part of what grown-ups and kids find so appealing about him. But there are undercurrents of surliness there, too, which keep him from being a complete sap.

Here, SpongeBob (his voice, a de Kooning painting of aural squiggles, belongs to Tom Kenny) is upset and frustrated when Eugene Krabs (Clancy Brown), his boss at the Krusty Krab, Bikini Bottom's most popular fast-food establishment, refuses to promote him to manager of his new joint, the Krusty Krab II. Mr. Krabs wants a responsible man for the job -- SpongeBob is just a kid. But then King Neptune's crown is stolen, and SpongeBob and his best starfish pal Patrick Star (Bill Fagerbakke) set out to prove their manliness by recovering it, deflecting any number of undersea creeps along the way.

If "The SpongeBob Squarepants Movie" sounds like just another movie designed to reassure kids that their place in the world is significant, it is, of course, partly that. But unlike so many movies designed to be suitable for kids, it isn't solely about its moral. The brilliance of "The SpongeBob Squarepants Movie" -- as well as the show -- is that it's cognizant without being self-consciously knowing.

SpongeBob and Patrick, despondent that they're kids and not men (at one point SpongeBob, referring to their obsession with ice-cream impresario Goofy Goober, laments, "We worship a dancing peanut for corn's sake!"), are delighted when Princess Mindy (a bespectacled mermaid cutie in a Lana Turner sweater, with Scarlett Johansson's voice) turns them into "men" by using mermaid magic to give them seaweed mustaches. They sing a little ditty to celebrate their newfound manliness ("Now that we're men/We have facial hair!") and march off to commit acts of bravery and derring-do, which, of course, go awry, although everything turns out all right in the end.

But it's telling -- and, I'm sure, completely intentional -- that SpongeBob and Patrick make it clear they feel they need to be "men" as opposed to "grown-ups." That's significant in a moviegoing climate where audiences still fall for manly-man Robert Bly baloney like "The Last Samurai," and stultifyingly old-fashioned tough-guy fables like Michael Mann's "Collateral," in which tests of manhood are mistaken for evidence of maturity.

The great relief is that the eternally innocent SpongeBob will never have to be a "man," although occasionally he may be called upon to act like a grown-up. And the pleasures of "The SpongeBob Squarepants Movie" stretch far beyond its message anyway: I still can't believe I watched SpongeBob and Patrick drive their crabcake-shaped car (it's called, with devious political incorrectness, "the Pattie Wagon") over a pile of skulls to get to a roadside stand that offers, with sinister portent, "free" ice-cream. (They will discover that the stand is tended by a wrinkled old lady who seems harmless enough but is really the uvula of a giant, hungry fish with excessively pointy teeth.)

This movie's idea of a cultural reference is a character sprouting Ed "Big Daddy" Roth-style bloodshot eyeballs, and these eyeballs are treated simply as the things of zany beauty that they are -- they're never a metaphor for anything else.

The visual and verbal screwiness of "The SpongeBob Squarepants Movie" is so direct that the movie feels like an oasis of sanity. When you leave it, the world just doesn't look right. At the very least, it's all the wrong colors.