Dark side of a sea dog

Legendary rogue John Hawkyns roamed the high seas for Queen Elizabeth, defeating the Spanish Armada, adventuring in the West Indies -- and pioneering the nefarious trade that would send millions of Africans into slavery. 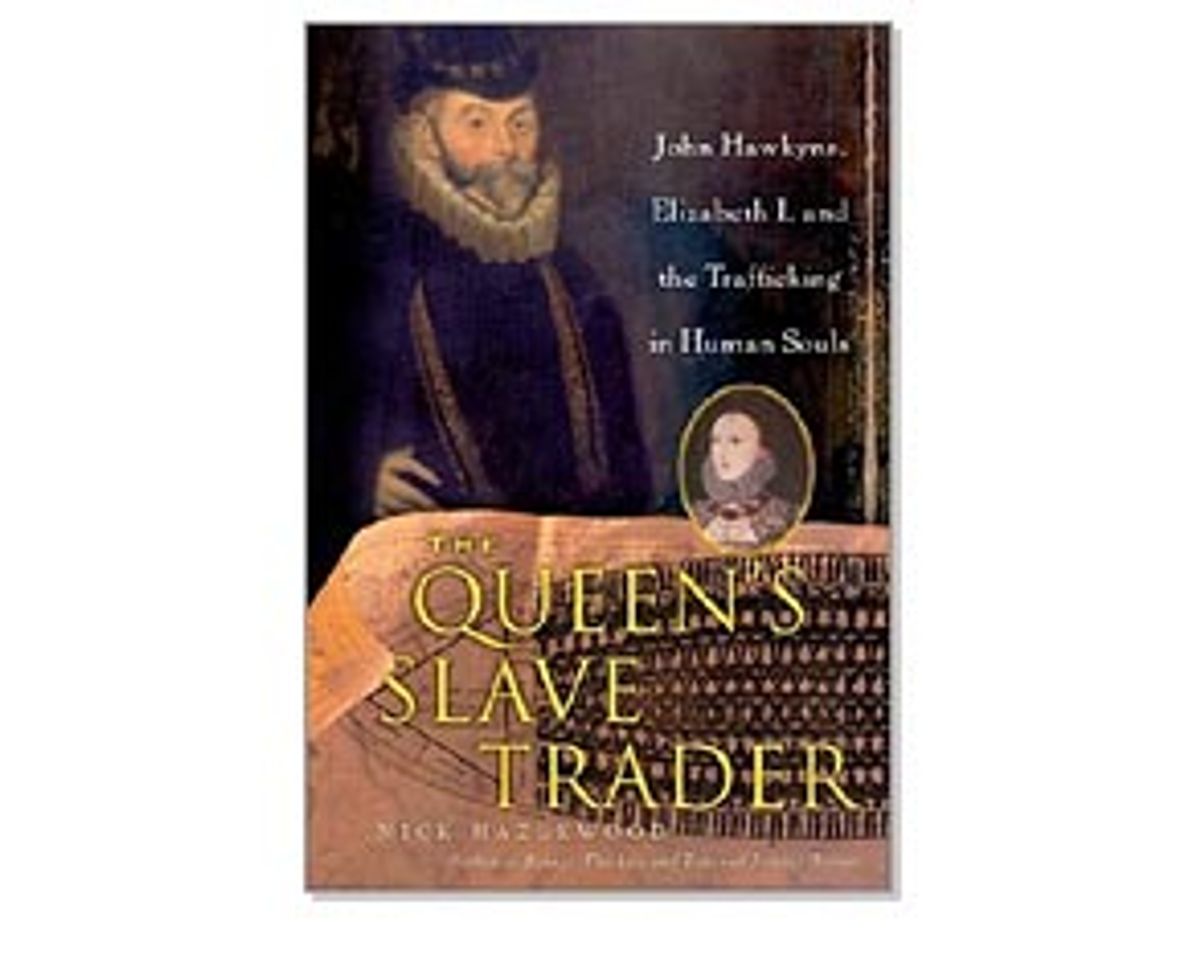 There's a certain spirit to the epigraph Nick Hazlewood chooses for his pointed historical biography, "The Queen's Slave Trader," that cuts right to the diseased heart of the matter at hand. He quotes John Keats' "Lines Written on 29 May, the Anniversary of Charles's Restoration, on Hearing the Bells Ringing." Keats writes, "Infatuate Britons, will you still proclaim/ His memory, your direst, foulest shame?"

The "memory" in question for Hazlewood -- a freelance journalist whose previous book, "Savage: The Life and Times of Jemmy Button," dealt with the tragic life of a South American native brought to England as an "exotic" on Charles Darwin's Beagle -- is that of John Hawkyns (or Hawkins, as others have spelled it). A contemporary and likely older relation of Sir Francis Drake, Hawkyns was a hero of the 1588 defense of England against the Spanish Armada, and a notorious pirate-merchant who, through violence, intimidation and sheer audacity, challenged the Spanish stranglehold on the Caribbean colonies. He was the kind of man who, in an angry letter to the royal treasurer of a town in what is now Colombia, could level a well-placed threat with ice-cold aplomb, writing, "seeing as [the town] had sent him to his supper [i.e., had sent a letter refusing to trade with him], he would in the morning bring them as good a breakfast." Before I bring your Patrick O'Brian-infused blood to an excited simmer at the prospect of enjoying another rousing seaborne epic, there is something far more sinister to consider regarding the Pirate Hawkyns. He was also the first Englishman to trade in slaves.

If the name sounds familiar, and you're not by chance a British naval history scholar, perhaps you've -- like me -- entertained an almost unhealthy infatuation with Bob Marley and the Wailers at some point in your life. In the 1972 song "You Can't Blame the Youth," Wailer Peter Tosh mellifluously delivers a ringing reggae indictment of Christopher Columbus, Marco Polo, Capt. Henry Morgan (overlooking his rather poor rum), and Hazlewood's pirate subject. Tosh sings, "You teach the youths about the Pirate Hawkyns/ And you said he was a very great man. But you can't blame the youth/ You can't fool the youth."

The gist of Tosh's lyric in many ways represents Hazlewood's project; that is, writing against history's largely favorable treatment of Hawkyns, and by extension that bane of the historian's existence: other historians. He writes, "Criticism of [Hawkyns'] role in the slave trade has been repeatedly rebutted by his biographers, who have argued that the use of hindsight and modern political perspective is morally and politically anachronistic. For four and a half centuries Anglophile historians have preferred to see John Hawkyns as a bold sea rover, a romantic figure with a salt-encrusted beard and the bulldog spirit coursing through his veins."

The proverbial ship has sailed on that conception. Hazlewood cites one ludicrously dim view in particular: "James Williamson, Hawkyns' most scholarly biographer, claimed that Africans should have been grateful for the help they were given to escape 'bloody and capricious tyrannies to which the negroes were subject in Africa.'" Believe it or not, there are still more amnesiacs and apologists willing to give Hawkyns such a pass.

Hazlewood's piercing pen has another purpose in mind as well, a more supremely regal prey in his sights. To wit, Hazlewood seeks to sully the immaculate aura about England's Virgin Queen, Elizabeth I, with the stain of having condoned the "trafficking in human souls." His intention is to demonstrate a direct and personal connection between her throne and Hawkyns' slave ships. Hazlewood wants to remember, not forget, and to hold history's leaders accountable for their actions. Those seem like reasonable aims in any respect.

In doing so, Hazlewood meticulously details the brutal and briny time in which his story takes place, with all its grand historical contexts and tautly knotted cultural subtexts. The history he recounts is important, primarily because slavery did change the world. Millions of people were deracinated. Whole economies and empires were birthed and borne on the backs of kidnapped Africans. The development of the African continent itself was irreparably arrested as a result of the stolen legacies of its strongest people. So we are still dealing with the dreadful aftermath even today.

What emerges from Hazlewood's account are the massive implications of the choices made by history's actors, and the stunning simplicity with which they seemingly made them. It's the kind of stuff that sends Hollywood executives on frantic searches for Russell Crowe's phone number. This was a time when Portugal and Spain didn't merely rule the seas, but divided them among themselves -- at the pope's behest -- in the Treaty of Tordesillas. To think that a north-south line could be drawn through the Atlantic Ocean, "somewhere between the forty-first and forty-fourth meridian," and that just two neighboring nations could divide possession of everything east or west of that line seems remarkable today. Or does it?

Regardless, this is marvelous contextual material for Hazlewood to work with, and he does not often disappoint in sketching the significance of the times. These grand themes make for an attractive backdrop, but the not-so-hidden subtext of both Hawkyns' and Elizabeth's world that Hazlewood gradually reveals as central to many of his characters' daily lives quickly becomes the most fascinating one to consider.

The religious wars between Protestants and Catholics that cleft many men from their fellow countrymen were brought, wholesale, out onto the high seas and to the New World. Hawkyns' men angered Spain's crusading conquistadors by defacing or destroying as many Catholic symbols as they could swing their swords at. In minutely describing the ethic of the sea -- his sailors' daily lives -- he makes apparent their religious devotion, bordering at times on fanaticism. Recalcitrant worshipers onboard were occasionally beaten with a rope "thicker than four fingers," and the crew indulged their sense of humor -- and hateful disdain -- on dull stretches of sailing with a game called "Reverend Fathers," which involved the men facetiously taking on names like Shaven Friar, Friar Lust or even Friar Fuc, "by which they meant one who went with women."

This cruel camaraderie by no means meant that the religious antagonism aboard Hawkyns' ships was shared by all the men. In fact, Hazlewood makes a point to explain how even in this extremely intimate environment, men were split religiously between younger men, who had known "nothing more than Protestantism," and older men, who "had lived through an uncertain and violent era in which England's official religion had switched between Catholic and Protestant with each change of monarch." Hawkyns' character best embodies this schism. He was ambivalent -- not in most of the decisions and declarations he made -- but he always kept his own religious convictions frustratingly close to the chest.

Hawkyns made three voyages to the New World along a triangular trade route: He left his native Plymouth, England, for the Canary Islands and Cape Verde Islands, stopping to pirate and pillage along the way, until reaching the coast of Western Africa, where he and his men performed their vile slave-hunting deeds. Once their "cargo" was loaded, they set out for the island formerly known as Hispaniola, and modern-day Cuba, Mexico and Florida to ply their trade, under show of force, if necessary -- and it often was. Disaster on Hawkyns' last voyage necessitated his abandoning a group of his sailors in Mexico, which meant unspeakable horrors were ahead for his men, left to defend themselves against hostile Indians and the more hostile, medievally "inquisitive" Spanish. The description of the Inquisition in the New World is Hazlewood's most fully realized spectacle, albeit a macabre one that might make Goya cringe. I am almost afraid to admit it, but Hazlewood's description of the abominable torture that one prisoner, Thomas Goodal, is subjected to is terribly compelling, though excruciating to read.

These were momentous times that, were an Elizabethan writing this tale, might call for grandiloquent prose. But Hazlewood handles his pen with a certain journalistic grace and reserve, and an Englishman's ironic distance, that only further clarifies the importance of the events he chronicles. He excels at illustrating instances of high drama -- duels and plots against pale-faced monarchs in particular -- and is especially good at exposing the sick hypocrisy that existed at the core of not merely the men who sold slaves, but especially those who made a production out of being "forced" to buy at the butt of a gun, but then happily relieved him of his human cargo. Hazlewood has a flair for the telling detail -- some sailors, sensitive to the virulent anti-Catholicism onboard the ships, would tie knotted strings to represent rosary beads -- and his characterizations are crisp and, at times, cutting.

Hazlewood's straightforward style occasionally drags, more so when he's telling Hawkyns' back story. Growing up in hardscrabble Plymouth as the son of a wealthy businessman -- despite Hawkyns' having murdered a man before the age of 20 -- was not quite the same as growing up in the South Bronx, shall we say. The author's narration is occasionally awkward when he inserts thoughts into Hawkyns' head, even if they're sufficiently dastardly ones. Saying that a brutal profiteer such as Hawkyns, standing on the deck of his ship after a bloody battle and hearing "the groans of the wounded and dying, may have wondered at the human costs incurred in the pursuit of slave trading," sounds a discordant note in an otherwise evenhanded account.

There are parts that lend themselves, almost too willingly, to screen adaptation, as when Hazlewood makes the rounds of Hawkyns' ships, listing the men and their rough-and-tumble stories in a manner not far removed from those weak Olympic-athlete segments NBC makes its audience suffer through. But Hazlewood redeems himself with perhaps his most precious detail: Hawkyns carried with him a six-piece orchestra for his and his officers' entertainment.

In attempting to prove that "John Hawkyns was very much the queen's personal slave trader," Hazlewood makes a compelling case. Queen Elizabeth exists throughout the narrative as a shadowy, almost translucent figure, and not merely because of her pallid complexion. It seems that, with her consent, Hawkyns began an enterprise that would transform England into the biggest slave-trading nation on earth, once her colonies had been established in North America. The numbers are always staggering: Between 10 and 20 million slaves were estimated to have been transported across the seas, and one-third perished along the way. That's why Hazlewood has focused his figurative spyglass on Hawkyns -- it is this ignominious legacy, as opposed to that of the scurvy sea dog, that should be remembered.

Perhaps it is best to turn to the words of a man who dealt with Hawkyns personally, Miguel de Castellanos, the recipient of Hawkyns' letter-borne threat: "There is not one of you that knoweth John Hawkyns. He is suche a manne as that any manne taulking with him hath no power to deny him anything he dothe request."

People grudgingly respected, and rightly feared, a pirate then. Though the lightness of Johnny Depp's Captain Jack Sparrow in "Pirates of the Caribbean" was thoroughly enjoyable, perhaps we mythologize them a bit too much now.

Peter L'Official is a writer living in New York.