Rich and evocative, "Myst IV: Revelation" is a worthy successor to one of the greatest computer games of all time. 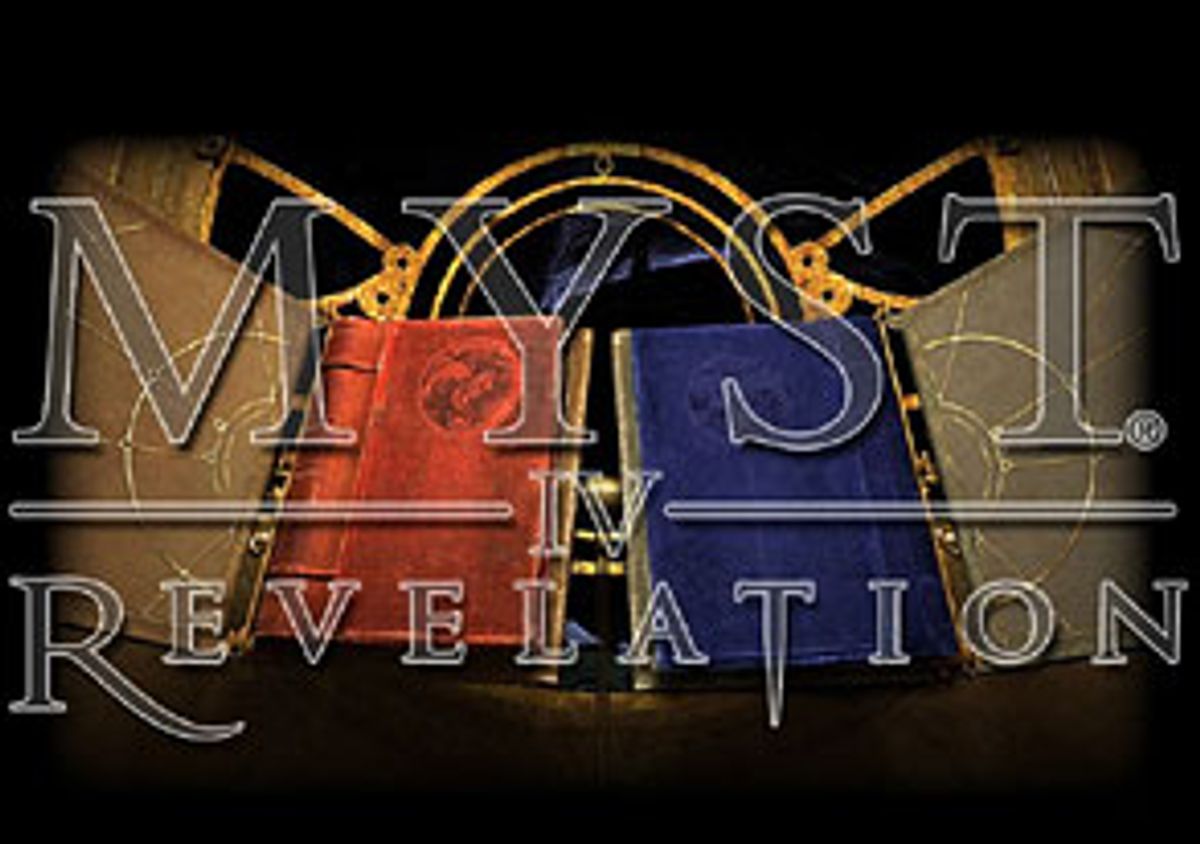 You might think there's no place on earth right now where you can escape the recent elections and the ever-ghastlier war in Iraq, no corner where a creeping sensation of doom hasn't penetrated. But you'd be wrong. With uncanny timing, the third sequel to "Myst," one of the best-selling computer games ever, has appeared on the market.

Full disclosure: Once, after Game Boy columnist Tom Bissell described to me the particularly tempting environments and puzzles of a popular new game, I asked him if it was possible to play it in a mode that would allow you to skip over all the boring fighting parts. He looked at me like I was crazy, and probably most other gamers would, too. The combat-free "Myst"-style adventure games I love belong to a breed that's not merely dying, it's two bleeps away from a flatline.

Fortunately, there's still Ubisoft, the company licensed by "Myst" creator Cyan Worlds to continue producing "Myst's" descendants. (Cyan Worlds itself has been preoccupied with a now-discontinued multiuser online game called "Uru"; since it doesn't run on the Macintosh platform, don't ask me about it.) The first installment resulting from this deal, "Myst III: Exile," didn't feel quite of a piece with "Myst" and its sequel, "Riven." The newest game, "Myst IV: Revelation," gets it right.

Unlike "Exile," "Revelation" manages to weave a coherent and meaningful story into the core experience of the "Myst" games: wandering around strange and beautiful environments, and poking through other people's stuff in search of clues that will give you access to even more strange and beautiful environments. Using the (admittedly hokey) device of a magical amulet that releases flashes of memory, the game feeds you snippets of video, pieces of a back story that lend a surprisingly urgent feeling to the proceedings.

It's all about one really dysfunctional family. Atrus, an avuncular bearded fellow who is the perennial host of all "Myst" games (and played, as always, by "Myst" creator Rand Miller), has a lot of trouble with his male relatives. In the first game, we learn that his two sons, Sirrus and Achenar, ran amok and had to be imprisoned. In "Riven," Atrus' father, Gehn, played the heavy. Fortunately for Atrus, his wife, Catherine, is angelic and in "Revelation" we meet his young daughter, Yeesha, a genuinely appealing child, played by Juliette Gosselin.

Atrus belongs to a race of people called the D'ni, who practice "the Art," a kind of magical writing that permits them to access any world they can describe with it. Sirrus and Achenar never learned the Art (Atrus didn't trust them with it), but they got into some of these worlds via the books in Atrus' library and, once there, did Bad Things. As a result, Atrus imprisoned them in worlds specifically written for that purpose.

We don't know exactly what Sirrus and Achenar did, but Myst is littered with sinister clues: bloody chains in one world, a drawer full of hypodermic needles in another. Stumbling on this evidence is actually far creepier than having the story spelled out. Although the designers of "Exile" seemed to forget this, and offered a series of pretty but sterile environments to explore, "Revelation" is full of the evocative details that make "Myst" games feel so rich: a broken child's toy, an unmade bed, wind chimes made of animal bones. Though its rooms are empty, they're filled with a sense of the inhabitants who have just stepped out.

Like "Exile," "Revelation" employs a style of 3-D navigation in which the player must move from one preset "node" -- or spot to stand -- to another. Once there, you can turn 360 degrees and look up and down to examine your surroundings. The cursor is a small disembodied human hand -- unsettlingly reminiscent of "The Beast With Five Fingers" and other demon-appendage movies, but you get used to it. (Also you can choose right or left hand, and from an assortment of skin shades. Very inclusive.) If a little magnifying glass materializes in the hand when you move it over an object, you can zoom in for a closer look.

Like an excellent hotel, "Revelation" is infused with the understanding that it's the little touches that induce delight. When you click the cursor on some nonmanipulable object -- a hanging pot, a wooden chair, a glass beaker -- the hand taps, and the sound it makes, from clang to ping to thud, matches the substance struck. Tap the hand over the image of a burning fire and you hear a hiss and the fingers splay out in shock. When you climb into a tiny submarine and shut the door, you hear the sound of your own breathing in the confined space. At any point, walking along the open-air pathways in the game's first world, Tehana, if you happen to glance overhead you'll see a filmy layer of clouds drifting across the sky. Yes, it's just a bit of animation, but the cumulative effect of these is that it's easy to believe those clouds are still drifting past even when you're not looking.

Tehana is a one-family settlement of rustic art nouveau cottages built around the rim of a small, water-filled caldera. (This is where Atrus, Catherine and Yeesha live.) The other three worlds to explore in "Revelation" are Serenia, the sacred island of a clan of vaguely matriarchal ancestor worshipers, and Spire and Haven, the two prison worlds where Sirrus and Achenar have been confined.

It eventually becomes apparent that Sirrus and Achenar have deceived their little sister into helping them escape and that someone has kidnapped the girl. Since Atrus is temporarily out of commission, you have to find her and figure out who, exactly, is to blame.

Sirrus is a supercilious, goateed snake; Achenar is a bushy-bearded brute prone to fits of primitive blood lust. And my, it's so good to have them back. The rage they feel toward their long-suffering, blameless father is remarkably believable and human, especially given that the universe all adventure games transpire in is fundamentally ridiculous. (Why would the only man in a world feel the need to set up elaborate combination locks all over the place, and then salt the area with carefully concealed clues to decoding the combinations?)

Seamlessly immersive environments are de rigueur for the "Myst" games, but the stories behind them have often felt stunted or ancillary by comparison. That's understandable. Stories are linear; their shape is determined by the chronological unfolding of events. But adventure game play is ambling and often circular. The player needs to feel free to turn left instead of right, to go back through the door he just entered and retrace his steps.

"Revelation" manages to preserve that sense of freedom while at the same time guiding the player through a strong narrative. You never feel like the designers have taken you by the ear and forced you to follow their lead or that you're being compelled to attend to a silly back story in order to figure out how to solve the puzzles. The story seems to be revealing itself to you naturally, when in fact you're being gently manipulated along its course. This integration between play and story is the most elegant I've ever encountered.

"Myst" was celebrated for the practical nature of its puzzles; they were based on real-world mechanics instead of the magic scrolls and gems used by the typical adventure game. "Revelation" mostly continues this tradition, though the elaborate nature of some of the puzzles will surely drive inexpert players to distraction and despair. They make a certain kind of sense, but let's face it, the logical simplicity of the original game's puzzles has yet to be matched.

Personally, I've never made it through any adventure game without referring to a walk-through now and then. In "Revelation," there were some puzzles that I could figure out on my own, enough to keep me from feeling like a complete dolt, but others had me baffled. Occasionally that was just because I'd neglected to fathom the underlying principle, but there are also a few missteps: No "Myst"-style game should ever include timed puzzles (where you have to manipulate several objects within a few seconds). That sort of thing only frazzles the tranquil mood the game is supposed to foster.

The ambience, after all, is the main attraction, so while the puzzles in Spire, a world made almost entirely of crystals, are among the cleverest in the game, the most stunning world is Haven, a sort of coastal jungle. Beginning with "Riven," the "Myst" series evolved a distinctive style of puzzles based on the natural world. In Haven, "Revelation" features an ecosystem of invented creatures, including a species of impish, big-eyed, lemur-like tree climbers who participate in a crucial plot development.

As you investigate Haven, waterbirds fly and dive around you, the lemurs screech and peer at you from overhead branches, herbivores come in for a closer look, then shy away. The effect is so charming and persuasive it's tempting to forget about the puzzles entirely. After all, solving them means moving to the next part of the game and leaving this tropical sanctuary behind. That will bring you one step closer to the end of the game and a return to ... well, you know. Why hurry?