A nation of little princesses

The wild success of the Disney Princess brand means that my daughter is obsessed with all things pink and sparkly. What's an enlightened father to do? 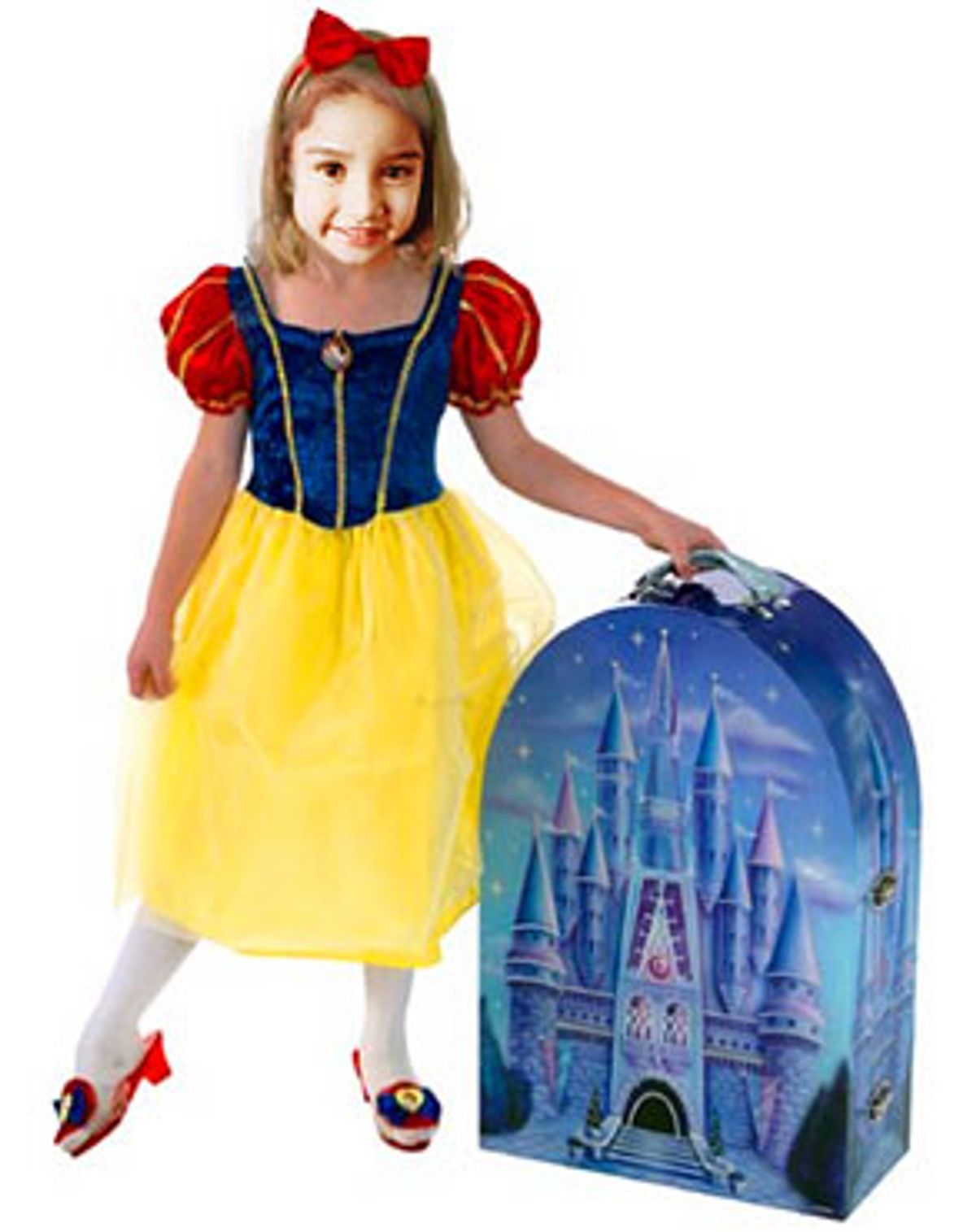 When my daughter turned 2, among the gifts she received were a doll and a fire truck. It was that bright red plastic emergency vehicle that captured her attention for days on end, while the doll, for the most part, languished atop a pile of untouched stuffed animals -- except for the rare occasions when its plush body was squished into the back of the fire truck. Progressive parents that we are, my wife and I saw this as vindication of the decision we'd made, while Bryn was still in utero, that we would not outfit our child's world in the trappings of traditional girldom. If she were to end up conforming to any classic little girl mold, it would be with no help from us.

A year later, that truck is gathering dust in the bottom of a closet and Bryn has openly expressed her desire to live in a pink castle. It all began when Dora the Explorer betrayed us.

I'd always been somewhat pleased that the cartoon character my daughter latched onto was the intelligent, intrepid Dora. For four seasons on Nickelodeon (and then its sister station Noggin, and then CBS), this school-age Latina role model eschewed nearly every girly-girl gender stereotype, the pink T-shirt that hangs loosely over her realistically rounded 8-year-old belly being the only token element of her nascent femininity. Dora's brain is touted as her main asset (she's bilingual; she solves jungle-based brainteasers), but she's also ruggedly athletic (she's the star of both her baseball and soccer teams; she never blinks before shimmying up a banyan tree or scaling a volcano). Dora's esteem-building, multiculti adventures are the polar opposite of the glitter-spewing, cutesy-fests -- think Rainbow Brite and My Little Pony -- that women of my own generation grew up with.

Then last month came "Dora's Fairytale Adventure," a feature-length Nickelodeon special (now on DVD) in which our heroine visits Fairytale Land and goes on a quest to become a "True Princess." By the end, her tomboy bob has been magically transformed into flowing Rapunzel-length locks and she's suddenly clad in a shimmery, puffed-out yellow ball gown. Dora is showered with "oohs" and "ahhs" from her talking animal friends who proclaim things like, "Look at Dora's shoes --they're so sparkly!" Then she flies off on a unicorn with a rainbow-striped mane. Seriously. It was at this point in the program that my daughter -- who I don't believe had any prior concept of royalty -- placed a pink shoe-box crown on her head and started twirling around, saying, "I'm a princess!"

The princess has been ubiquitous in pop culture in recent years. Not that she'd ever gone away. The archetype is one of the longest-lived in all of literary history, and a spate of films ("The Prince & Me," "A Cinderella Story," the entire Anne Hathaway oeuvre, coupled with some classic toys that have undergone heavily marketed princess makeovers, such as Barbie as the Princess and the Pauper, the Cabbage Patch Princess, the aforementioned Dora) have left young girls in a world where they can't turn their heads without having to shield their eyes from the glare of a tiara.

Leading the charge in this princess revolution is Disney -- no surprise, really, as this is the company that has had bustled skirts and puffy sleeves at the core of its business for well over half a century. The idea for a Disney Princess brand was born four years ago, when Disney Consumer Products president Andy Mooney went to see one of the company's famous ice shows and spotted a number of young female audience members dressed like little doppelgängers of their favorite characters. The Princess brand, which groups together eight of the studio's animated film heroines -- Belle ("Beauty and the Beast"), Ariel ("The Little Mermaid"), Jasmine ("Aladdin"), Pocahontas, Mulan, Cinderella, Snow White and Sleeping Beauty -- into one big tea party posse, was an instant success. It started with some dress-up costumes sold at the Disney Store, and after those initial test products vanished from the shelves faster than Cinderella's coach at midnight, Disney knew it had a major hit on its satin-gloved hands. Sales of the Princess line were an astounding $2.5 billion last year, up from $300 million in 2001.

"We've gone beyond the dress-up and toys, and begun to look at the brand as a lifestyle, filling out all the other things girls need in life," says Mary Beech, director of franchise management for Disney Consumer Products. Indeed. In addition to the official Disney Princess merchandise for the home -- beds, comforters, cereal, toothbrushes, dolls, castle tents, storybooks, TVs, DVD players -- parents can throw their daughters an official Hallmark Disney Princess party complete with a cake that has a few regal beauties waltzing on top; they can take them for breakfast with the princesses at Disney World in Florida; And they can enroll them in a princess class at the recently opened World of Disney store in New York. There Cinderella's beautiful friend, Lady Seraphina, will educate starry-eyed youngsters in the four Princess Principles -- intelligence, grace, thoughtfulness and honesty -- through lessons involving everything from "teamwork, table manners, and truthfulness to courtesy, compassion, curtseys and kindness."

The ease and rapidity with which a princess obsession can take hold of a young girl's psyche is mind-blowing. Josh Levine, a Brooklyn, N.Y., writer/photographer, says he and his wife made a decisive effort to keep their daughter, Sasha, away from anything Disney. But when she was a little over 2 she watched a video of "Sleeping Beauty" at a friend's house and was immediately hooked. Soon the accoutrements of princess-hood started to fill the Levine home and Sasha began to insist upon wearing ball gowns as her everyday wardrobe. While decked out in her full Snow White regalia in early October, a woman on the street asked the 3-year-old if she was going to dress as a princess for Halloween, to which Sasha responded, "No, I am a princess." "I became more and more conscious of the fact that she was always in character," says Levine. "It's like dating an actress."

But he also realized that, as the parent of a princess, he was not alone. The widespread nature of the princess phenomenon made itself known to Levine one day at a local playground. "There was my daughter, traipsing through the park dressed like a princess, when I looked around and I started noticing others," he explains. "I assumed their parents were undoubtedly tripping out like I was." In an experimental attempt to bring these royal families together, Levine decided to throw a princess party -- for anyone who wanted to come. He posted a sign announcing that the very next day would be the First Annual Prospect Park Princess Picnic. And with less than 24 hours' notice, 25 little girls -- each in full costume -- showed up for a party. "People always talk about 'the magic of Disney,'" Levine says. "Well, that's the magic of Disney: It's addictive. It's like crack for 5-year-olds."

So, why are young girls so enthralled by princesses? "Transformation is at the core of all the princess fairy tales," says Maria Tatar, Harvard folklorist and editor of "The Annotated Brothers Grimm." "Young women, often poor, sometimes even almost animal-like, end up with all the power in the end. Little kids, even very young ones, can understand who has the power, and that has always been part of the attraction."

In a world where women struggle for power, isn't anything that gives my daughter a sense of strength a good thing, even if it leaves a trail of glitter on the carpet? For Tatar, the answer is, "Not necessarily." Disney, she believes, "capitalizes on the worst parts of the fairy tales." By celebrating the ugly duckling scenario of overnight transformation, she says, most of Disney's princess tales reinforce the idea of achieving power through fabulous clothing and great wealth. The problem as she sums it up: "They don't work for it."

As any parent who has sat through endless viewings of these various princesses' films can tell you, there's some truth to that. While Jasmine, Pocahontas and even Belle showed literal girl power by standing toe-to-toe with their cartoon foes, Sleeping Beauty is a victim, and as far as I can tell, Snow White's greatest feat of courage was dusting. And the No. 1 seller in the Princess line -- Cinderella -- shows a rebellious spirit by disobeying her wicked stepfamily, but essentially gains all her power through the good will of a magical floating Angela Lansbury look-alike.

Disney Princess chief Mary Beech agrees completely with the transformation and power theories, insisting that there's more to these heroines than "just the dress." "Princesses can get their way: They can manage unruly boys, they can banish the family dog -- and it makes girls feel good about themselves," she says. "The princesses are good-hearted, happy, positive characters. But," she concedes, "you do have to get used to a lot of pink."

Pink I can deal with. (Bryn has been inexorably drawn to the color seemingly since birth.) I think my concern about my daughter's first experimentations with crown-and-scepter culture had to do with the fact that it was a phase that seemed entirely focused on telling her how beautiful she is. Belle may be well-read and Mulan can ace archery, but they only find true happiness once they're married off with royal expense accounts.

"Culturally, these stories impress upon girls the importance of beautiful dress and gorgeous good looks," says Tatar. "But in many of the original versions of these classic fairy tales, the girls are feisty and cunning; they use their intelligence and work very hard to liberate themselves." Just like Dora the Explorer.

Which suddenly got me thinking about Dora's Fairytale Adventure again, the epic that was the catalyst for Bryn's current princess obsession. While, yes, Dora winds up looking like someone who should be in the audience at a joust, waving a silky kerchief to cheer on her chosen knight, she actually does achieve that magical transformation through quick thinking and resourcefulness. To gain the mystical items that will eventually earn her a tall pointy hat, she braves a smoke-snorting dragon, tames a cranky giant and outwits a witch, among other daunting tasks.

So for a parent like myself, who can sometimes admittedly be overly sensitive, is it even worth fighting the Disney princess paradigm? Josh Levine says no. "Being a princess makes Sasha so incredibly happy," he says. "At least it's not Barney."

As I pondered it all, staring into a Toys "R" Us catalog at the lavender-turreted Disney Princess kitchen that my daughter opted to put on her Christmas list in lieu of a much more pleasantly hued Little Tikes one, Bryn wandered into the room, looking absolutely adorable in her favorite oversize "gown" (a velvety red dress that belonged to my wife once upon a time) and "tiara" (part of my wife's bridal headgear from our wedding). I was struck with a moment of not-so-regretful resignation: Maybe the princess phase is simply an inevitable part of raising a daughter and soon it will be my job to steer her out of it. That's when Bryn removed her tiara, reached up and squeezed it, somewhat painfully, onto my head, and said, "You're the princess, Daddy. I'm the queen. Dance with me." I got up and twirled her around, of course.