An excerpt from comedian Josh Kornbluth's monologue on Ben Franklin, wherein he brings the Founding Father into the present. 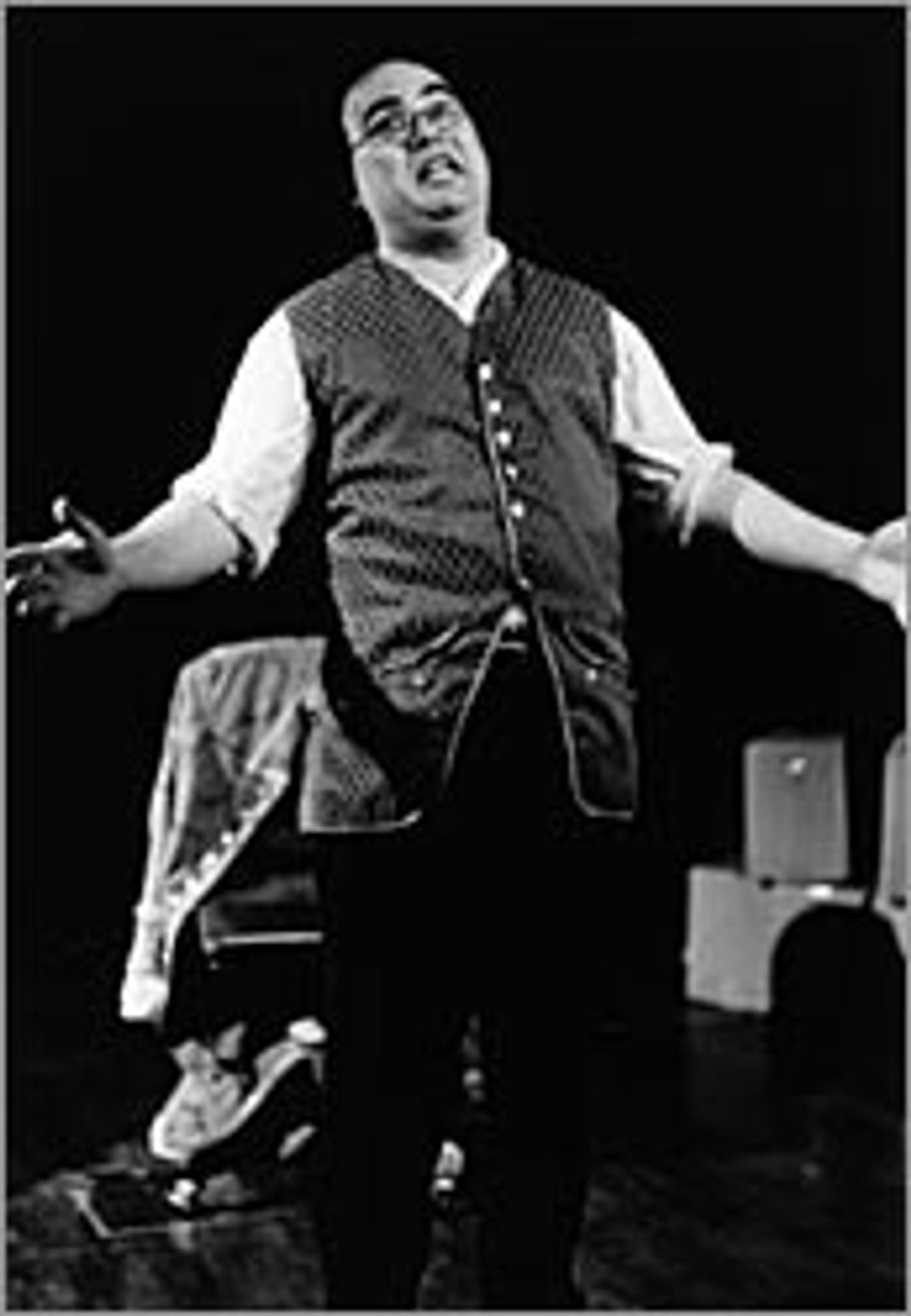 Morning. I say "morning" -- it was my kind of morning: 2, 2:30 p.m. I'm up with the crows. In fact, I was getting up even later than usual because I was going through one of my recurring periods of great lassitude, where I lose the vector. I have no direction in my life. I just want to stay in my little apartment, keep the shades drawn, take to my bed. I'll watch whatever professional bowling happens to be broadcast on my television set. That was my plan for the whole rest of my life.

My God, I look like Ben Franklin! I really do! Why did I never realize this before?

At which point, the phone rang.

"Mom, I'm a tad preoccupied, OK? Because I think I just realized that I look like Ben Franklin."

"You look like Ben Franklin, dear? Well, OK. You know, when your grandfather was your age he was known around certain parts of Brooklyn as the Jewish Clark Gable. So why couldn't you be the Jewish Ben Franklin? Sure ... Oh, hold on a second, honey. Your Aunt Birdie's over. She has something she cannot wait to say to you. Hang on."

"Josh! I couldn't help but overhear what your mother was just saying. And you know something? It's true! You do look like Ben Franklin! Josh, do you have any idea what this means? This could finally be your ticket out of obscurity and into the big time. Josh, you could be the next Hal Holbrook!"

Which was ridiculous on its face. I mean, I'd seen Hal Holbrook's one-man im -- Well, I guess you can't really do a multiple-man impersonation of Mark Twain, but what I'm saying is: I'd seen his show "Mark Twain: Tonight!" And even if my Aunt Birdie hadn't dragged me to see it when I was a kid when it was on Broadway, in those days -- at least, in the Tri-State Area -- you could not avoid seeing Hal Holbrook's Mark Twain. It was everywhere. You'd go to a bar mitzvah, there was Mark Twain. You'd go to a funeral, people were "Baruch adenoi elohenu Huckleberry Finn..." Wherever you went, there was Mark Twain.

I didn't like it. It's not what I do. Aunt Birdie knows that.

And even if I wanted to do a show where I portrayed Ben Franklin, what do I even know about the guy? Besides, of course, you know, that he was quite handsome. But apart from that ... how can I plug in, if you will, to the man who I believe was known as The First American?

Well, OK, my maternal grandparents were among the first un-Americans, so that's a link. It's a weird link, but it's a link.

And I believe Franklin was some kind of great civic leader. And, you know, again, I try to do my part on a civic level. I vote. I go to the polling booth on Election Day; I do the hard work of democracy. I bring my clip-out from my local progressive weekly and I copy down their recommendations exactly; it can be very intense -- if you get off by even one line, you can get a very low score. And yet there still seems some distance between what I've achieved and what Ben must have accomplished on a civic level.

And yet, as I continued to stare at myself in the bathroom mirror, I couldn't shake this idea -- this idea of doing a Franklin show. Because, for one thing, my Aunt Birdie was into it. And when my Aunt Birdie's into something, you have to give it some credit. Because, OK, say what you will about my Aunt Birdie, but out of all of the communists in my family, Aunt Birdie is the one who by the end of the blacklist had become a millionaire. A communist millionaire during the blacklist! That takes drive. That takes flexibility. That takes a vector. You have to respect that.

I thought, well, perhaps as usual my Aunt Birdie is right. Perhaps the answer to all my problems is literally staring me right in the face.

[Only weeks later, after strenuous research that revealed a less-than-flattering portrait of Ben, Josh finds himself -- thanks to the efforts of his Aunt Birdie -- walking the streets of New York City, dressed in a Franklin costume, making a series of comic spots for MSNBC.]

And as my Aunt Birdie had foretold, so it came to pass. The costume, the theme song, and ... television! I'd never done television before. We had to shoot four spots in one very frenetic day. And we couldn't present, of course, the evil Franklin that I had learned about in my researches. We couldn't present the deep historical Franklin. So we ended up presenting a Franklin who basically did shtick.

"Hi. I'm Ben. I'm a Single White Founding Father, and I'm looking for that special someone to share my joys: A long walk along the beach. Maybe a bonfire. And if things are going really well, perhaps we could do a sensual re-drafting of the Constitution. You know, you remove an article, I remove an article..."

On to one of the millions of electronics stores along Broadway, where our Franklin was discovering the cellphone:

I'd had no idea it was so much fun to yell the word "figgy" into a cellphone. So they indulged me by making it a running gag through all four of the spots that Franklin would be ordering figgy pudding over the cellphone. The only problem being that I was supposed to be using a fake phone number, and I didn't know any fake phone numbers. So I was using my mom's. She had no idea what was going on.

And then, during the breaks in between shooting the spots, there was no time for me to get out of my costume. So, like, I'm standing in front of that electronics store on Broadway. I'm sipping some coffee. And this really old guy walks past me, and he sees me. And I can tell he just has to come up and say something to me.

He goes, "You're making me feel even older than I am!"

On to Catch a Rising Star, where our Ben Franklin is now a stand-up comedian:

"Hello there, ladies and gentlemen. Hi, I'm Ben. I'll be your host tonight. Well, folks, I just flew in some muskets from the coast -- and Boy, Are Those Arms Tired! ... What is this -- a bunch of Redcoats in here? I don't understand!"

So we're preparing to set up for that world-historic spot, and my camera people are setting up. In the meantime I realize that down the block, also in front of the U.N., there's this commotion. And so I sort of amble about halfway down, trying to make out what's happening.

So after a while, I finally make out what's going on. This guy who's yelling and screaming, he's apparently known as Michigan Mitch. He's a militia leader from Michigan. And all these other guys wearing battle fatigues, they're also militia leaders. They're having a convention of militia leaders, from all around the country: you know, Michigan, Idaho, Utah -- all the really great progressive states have sent their militia leaders.

So I'm standing about halfway down the block. I'm taking this all in. Steaming silently to myself -- which is my usual form of political engagement.

But at some point -- I think it's just from hearing that same phrase over and over: "Founding Fathers, Founding Fathers" -- at some point, something just came over me. I don't know -- maybe it was the costume. But all of a sudden I heard myself going, "Excuse me, sir!"

And all the guys behind him go, "Hunh?"

And I'm standing there. And I go, "Well, ah, yes sir -- I couldn't help but overhear you talking about what the Founding Fathers might have intended. As perhaps you can tell, sir, I am a Founding Father! I'm Ben Franklin. And as a matter of fact, sir, I happen to have founded the first ever American militia. So I can tell you, sir, you know nothing about what you speak! Our militias, they were a stopgap measure. We had no standing army. We were a colony. If you, sir, want to join what we intended in the Constitution to be a "militia," then you must join your local branch of the National Guard. Otherwise, sir, just accept you're a bunch of addled, discontented nincompoops -- and that's IT!"

Now here's the thing: He accepted that I was Ben Franklin. That evidently was no leap at all for Michigan Mitch. Without even skipping a beat he goes, "Well, Ben -- I wasn't talking about you, OK? You're one of those egghead Founding Fathers -- the diplomats, the inventors. I was talking about the soldiers, OK? The George Washingtons..."

Well, I was still on a high from that experience hours later...

Josh Kornbluth is a San Francisco-based monologuist who has been performing in Hartford, Connecticut as part of an intermittent worldwide tour. He is the author of "Red Diaper Baby," a book of his stage pieces recently published by Mercury House.