Can Bush deliver for conservatives?

Lacking Reagan's pragmatic streak, the president may find it impossible to unite a party deeply divided on social, foreign policy and budget issues. 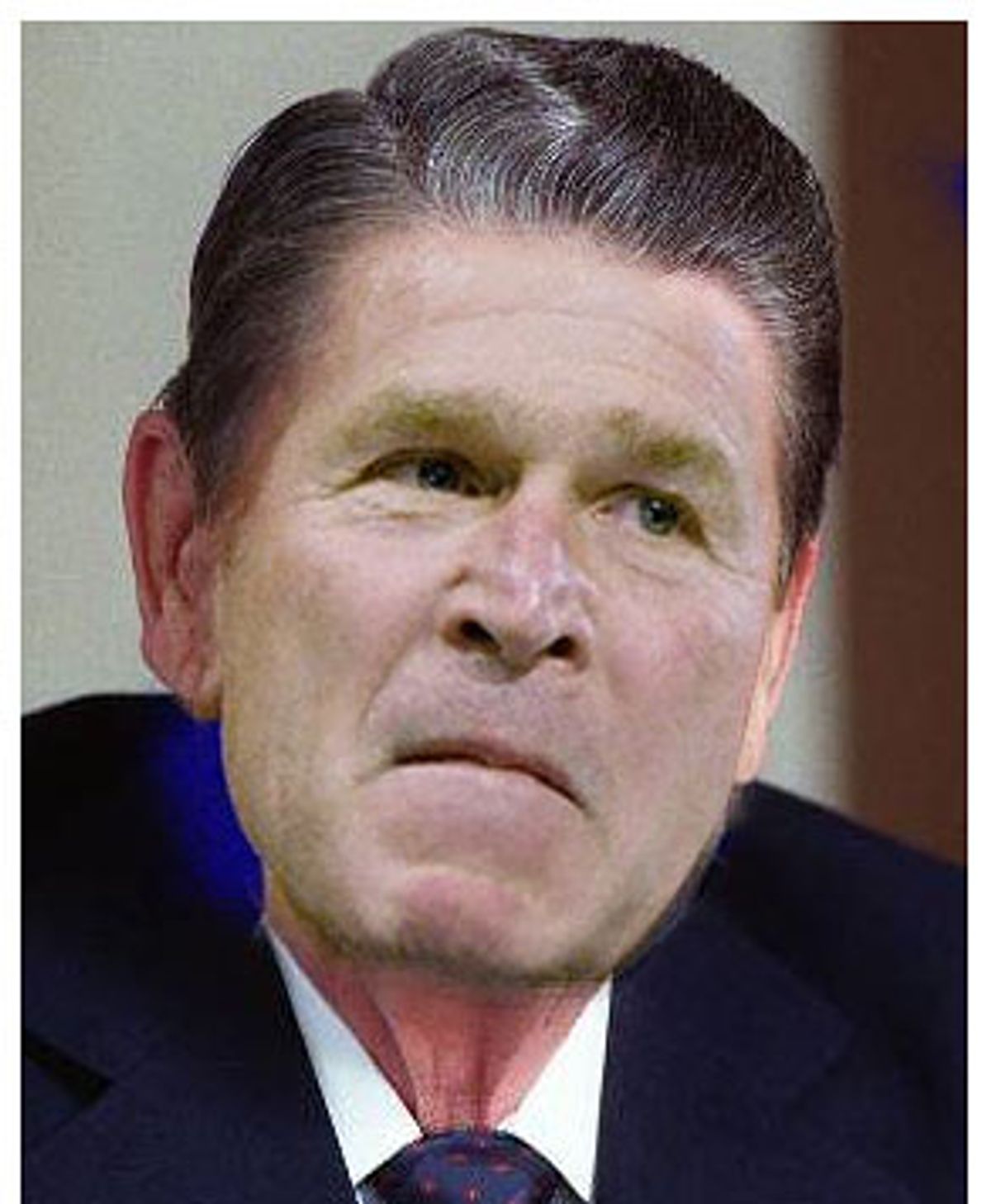 In 1964, when Lyndon Johnson crushed Barry Goldwater to win the White House, liberals announced that the conservative movement was dead. Richard Rovere of the New Yorker argued that the election had "finished the Goldwater school of political reaction." Four decades later, political strategists are debating a new theory -- the notion that the right, not the left, will establish a lasting coalition because President Bush took 51 percent of the popular vote on Nov. 2.

Appearing on NBC's "Meet the Press" on Nov. 7, Bush political strategist Karl Rove asked: "Would I like to see the Republican Party be the dominant party for whatever time history gives it the chance to be? You bet."

Contrary to the media picture of a comfortably dominant Republican majority, however, conservatives face the sternest test in their modern history in the wake of Bush's reelection. Rather than being united, conservatives today are deeply divided on social issues, foreign policy and budget policy. The conservative edge of the GOP controls the White House and Congress and is likely to tighten its grip on the Supreme Court and the federal circuit courts. Bush must deliver for conservatives on their highly sought-after agenda. But the price, ironically, could be fissures in the very majority that emerged in the election. Indeed, the rebellion has already started. On Nov. 20, a core group of conservative House Republicans derailed hopes for swift passage of a 9/11-related intelligence reform bill that Bush and Senate Majority Leader Bill Frist had endorsed.

Expectations on the right are higher than ever. "This administration," former Republican Rep. David McIntosh told the New York Times at a Federalist Society conference in early November, "understands the things we believe in, and everyone here knows that the next four years are going to be even better -- far better." And "with a bigger majority, we can do even more exciting things," House Majority Leader Tom DeLay told a Houston television station after Election Day.

Now Bush must decide how to unite the right while keeping moderate conservatives and many other Americans calm, if not happy. To achieve this goal, Bush's advisors will probably turn to the example of President Reagan in his two terms. While it's the right place to look, the historical parallel may well prove fruitless. To paraphrase Lloyd Bentsen's famous riposte to Dan Quayle: George W. Bush, you're no Ronald Reagan.

Unlike Bush, Reagan had a unique ability to separate his rhetoric from his actual policies, and to benefit from it. He had a deft touch in dealing with right-wingers and keeping them in the fold, which Bush may lack in his second term. Finally, he wasn't stubborn and was willing to fold his tent when he needed to. On all three of the fronts on which Bush is battling, the contrast couldn't be clearer.

In foreign affairs, Reagan understood the difference between rhetoric and policy, hubris and humility. For all of Reagan's promises to dismantle the Berlin Wall, defeat the "evil empire" and end the Cold War, Reagan had a pragmatic streak in confronting foreign crises.

Just look at the contrast in how the two presidents have dealt with potential Middle East quagmires. In September 1982, Reagan promised "the restoration of a strong and central government" in war-torn Lebanon. U.S. forces, he said, would be part of a multinational peacekeeping team to achieve this aim. Marines arrived in Lebanon, but law and order didn't prevail. Eight CIA officials, along with nine other Americans, died when a delivery van was blown up near the U.S. Embassy in Beirut on April 18, 1983. Reagan stood firm, but his feet were not planted in concrete.

On Oct. 23, 1983, a yellow Mercedes truck filled with explosives detonated at the Marines' barracks and 241 Marines were killed. Reagan had ignored the advice of his military chiefs that the Marines in Lebanon were vulnerable to attack, and his policy, as they had feared, ended in disaster. Three and a half months later, Reagan, in a bow to reality, discarded his earlier rhetoric and withdrew U.S. forces from Lebanon. In doing so, he sidestepped a protracted bloody conflict in the Middle East.

On Iraq, President Bush has displayed a tin ear. Conservative columnist George Will said it best in a May 11 column: "Failures are multiplying because of choices for which no one seems accountable." Conservative commentators William F. Buckley Jr. and Patrick Buchanan also have criticized Bush's handling of the Iraq war, and former Washington Post reporter and Reagan biographer Lou Cannon recently remarked that he agreed with Buchanan: "Ronald Reagan would never have waged it."

Neoconservatives' predictions that Americans would receive rose petals upon entering Iraq have proved wrong. Vice President Cheney, Defense Secretary Rumsfeld, Paul Wolfowitz, Richard Perle and others have as yet identified no exit strategy to bring home the 140,000 U.S. troops fighting against an insurgency that grows more deadly by the day.

This same embrace of blind faith over reason can be seen throughout the Bush administration's approach. Where Reagan evinced restraint, Bush has demonstrated radicalism. Reagan used rhetoric, adopted stagecraft and employed modest military power, from bombing Libya to invading Grenada (a tiny island) to creating the impression of strength on national security. Bush, by contrast, has put into action the neoconservative goal of invading Iraq and the neoconservative theory of establishing democracy through force in the Middle East.

And instead of appointing Cabinet officials for his second term who are untainted by his Iraq policy, Bush chose ultimate loyalists to become attorney general (Alberto Gonzales, who described the Geneva Conventions as "quaint") and secretary of state (Condoleezza Rice, who has shared responsibility for Bush's Iraq policy). These appointments are a good illustration of Bush's lack of capacity for second thoughts.

The experience of Vietnam shattered the national consensus over the wisdom of containment strategies and liberal internationalism. Because of Bush's inflexibility and lack of political dexterity, Iraq could very well shatter the conservative movement's claim to competence in foreign affairs.

On social issues as well, Reagan demonstrated skill at winning over conservatives and again showed his ability to divorce rhetoric from policy. Reagan had a track record. In 1967, while serving as governor, Reagan had signed a law written by liberal legislators that legalized abortions in California. But in 1980, discarding his earlier policy, Reagan delivered addresses to Christian-right audiences, and endorsed a constitutional amendment outlawing abortions except when the mother's life was endangered.

After taking office, Reagan never spent his political capital on efforts to amend the Constitution. He conserved his capital and nimbly appointed a moderate to the Supreme Court, Sandra Day O'Connor. (Many of Reagan's advisors supported reproductive rights.) "Nor did Reagan devote much of his energies to other aspects of what was often called his 'social agenda,'" Cannon wrote in "President Reagan: The Role of a Lifetime."

Bush, meanwhile, has blundered by indebting himself to social conservatives in ways Reagan avoided. Bush, who talks about religion far more openly than Reagan did, has already risked political capital by limiting research into stem cells. In his second term, he will have little choice but to fight hard to amend the Constitution to ban gay marriages, undermine Roe vs. Wade in the courts, promote faith-based institutions through federal dollars and support prayer in public schools.

But Bush risks alienating moderates of all stripes if he spends his energy on legislating "moral values." Bush has only himself and Karl Rove to blame for this quandary.

Finally, Reagan's approach to entitlements was far more deft than Bush's blunt effort to dismantle the welfare state. Reagan railed against big government as a bloated challenge. But save for one exception when Reagan proposed (and failed to enact) a 10 percent cut in Social Security costs, he refused to directly take on Medicare and Social Security; in fact, his early budgets protected these entitlements from being cut by right-wing lawmakers.

Here, too, Bush courts a backlash. Bush's Medicare prescription drug law will sow confusion at best and anger at worst among the elderly when it takes effect in 2006. His Social Security privatization scheme, if enacted, could cost as much as $2 trillion and frustrate conservative lawmakers committed to deficit reduction in Bush's second term.

Bush talks with passion about the efficacy of market-based reforms of Medicare, the democratization of Iraq and creating "a culture of life." But whereas Reagan avoided enacting the bulk of conservative agenda items, Bush seems poised to act boldly.

Intent on using his capital to secure his place in history, Bush may finally pass a right-wing social agenda, an entitlement reform agenda and a neoconservative foreign policy. If he does, he will risk alienating various parts of his base, along with many moderates. And by enacting his program, Bush may dash conservatives' hopes for a lasting Republican majority.

If he does, he will show that he has ignored the political lessons Reagan bequeathed to his party.

Matthew Dallek, an associate academic director at the University of California Washington Center, is the author of "The Right Moment: Ronald Reagan’s First Victory and the Decisive Turning Point in American Politics"