Where democracy refuses to die

The media was pro-government. In much of the country, the election machinery was controlled by the ruling party. Voter fraud was rampant. But the people of Ukraine will not surrender. 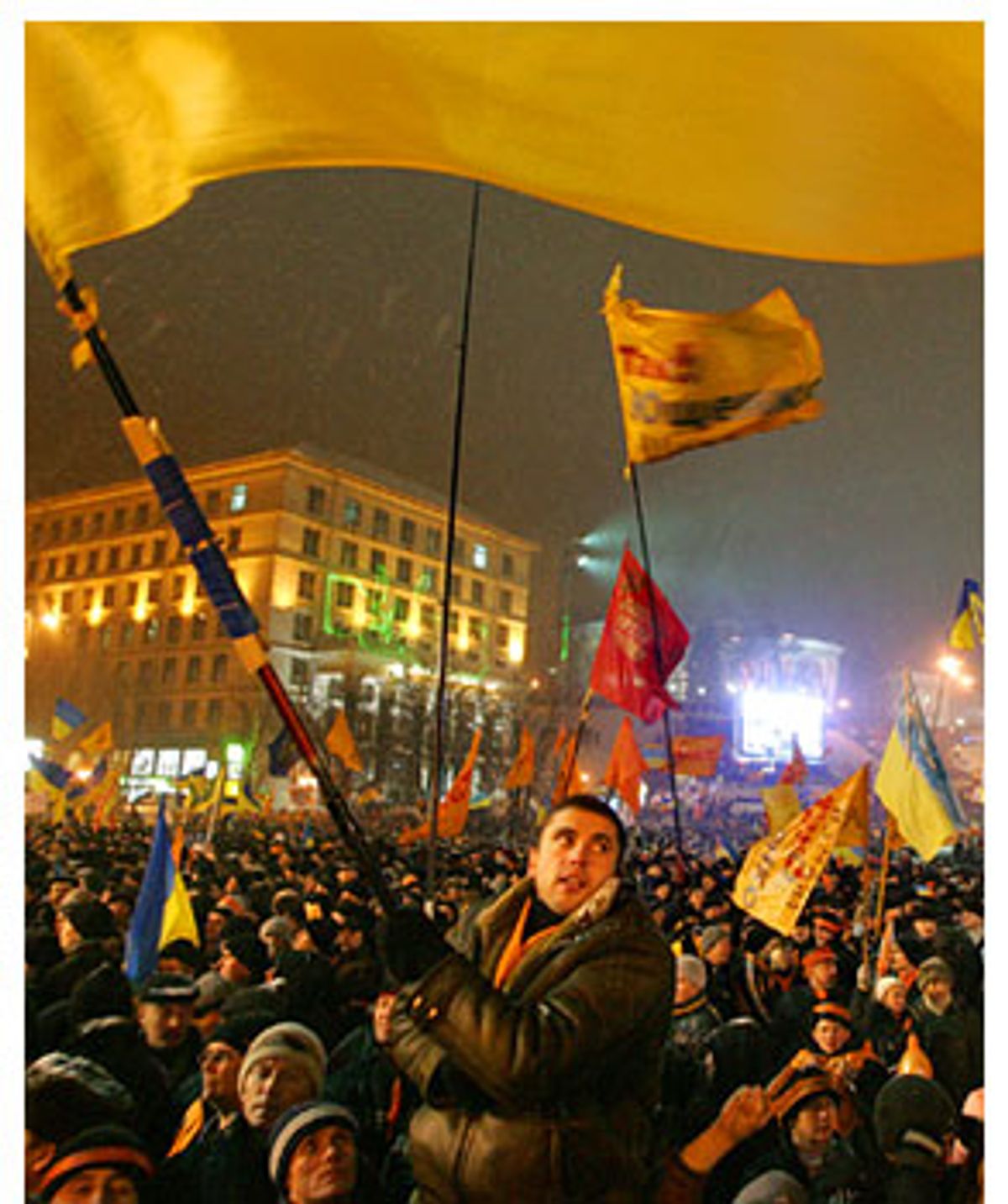 Progressive American voters, still downcast over the results of the presidential election -- as well as an election system gravely impaired by the antiquated Electoral College, fraud-inviting electronic machines, and rampant political abuses -- can take vicarious pleasure these days from Ukrainian democracy. Throughout the presidential campaign in the former Soviet republic, opposition candidate Viktor Yushchenko struggled against a government-controlled media and election machinery that heavily favored his opponent, Viktor Yanukovych, the handpicked successor to the country's corrupt and thuggish president, Leonid Kuchma. But when Yushchenko was denied victory in the Nov. 21 election, after widespread fraud, the opposition leader and his supporters did not fade away -- they took to the streets and refused to accept the official version of the election.

With the Ukrainian Supreme Court still deliberating the opposition's election challenge -- and the democratic revolution in full flower on the wintry streets of Kiev -- Salon spoke with Olena Prytula, editor in chief of Ukrayinska Pravda (Ukrainian Truth), the courageous Web site that has been responsible for some of the country's only aggressive, independent coverage of the Kuchma regime. Prytula's partner, Georgi Gongadze, was kidnapped, murdered and beheaded four years ago -- an execution that a former bodyguard of Kuchma later charged was personally ordered by the president. In the past few weeks, Prytula and her small staff have thrown themselves into covering the dramatic election and aftermath, with traffic to her site ballooning to five times the normal flow. Prytula spoke by phone from Kiev, after another long, exhausting day, about the democratic uprising that contains "some small part of my work and my soul."

Are you hopeful that the Supreme Court will rule in favor of the opposition?

It could take several days for the decision. I hope that the opposition has enough documents to prove the election was stolen.

Even Kuchma said on Monday he favors new elections.

Yes, but this is not good. To make a new election is very difficult. The opposition will have to raise new money, run new campaigns, it's very expensive. And everybody is tired of elections already. So I'm not sure it's the best choice for Ukraine. If Kuchma wants a new election, it probably means he hopes to find another candidate who will be stronger than his last one, Yanukovych. Nobody trusts Kuchma -- so I don't trust him when he says he wants new elections. It means he has something up his sleeve.

Is he thinking of running himself?

No, he said today that he will not enter the race.

So Yushchenko is not pushing for a new election -- he wants the Supreme Court to rule that he was the real winner of the last election?

Yes, that's true. The opposition is hoping that the Supreme Court will find that the vote in several regions was fraudulent. Most of the regions were in the east and central Ukraine, where Yanukovych is strong. His people control the government in these regions and control the vote count. You know, as Stalin said, it doesn't matter who votes, it's who counts. So we have the same situation -- the Yanukovych people did the counting.

But the local media in these regions have a lot of video documentation that these elections were not fair and transparent. So the truth is getting out.

Do you believe the Supreme Court will rule in the opposition's favor or the government's?

Is it similar to the U.S. election in 2000, when it was all but certain how the Supreme Court in Washington would rule, because it was stacked with Republican appointees?

Well, it's true that our Supreme Court justices feel very strong pressure from the Kuchma government right now. But on the other hand these justices see the thousands of people on the streets and they don't want to be enemies of these people. So I believe in the end, they will behave properly and make a just decision.

There's discussion that Ukraine may split in two, with the eastern region, which is more closely linked to Russia, breaking away if Yushchenko becomes president? Do you think this is a real possibility?

Yes, I do. Ever since Ukraine became independent, no one even thought about that. But it's only now, when Russian advisors who work for Yanukovych are pushing him on this, that this question arises. Because of his Russian advisors. Throughout the campaign, these advisors positioned him so that Yanukovych was supposed to represent the east, and Yushchenko the west. Actually, the election results showed that Yushchenko has support in the center of the country and partly even in the eastern regions.

The other problem is that people who live in eastern Ukraine did not get any reliable news and information during the campaign about Yushchenko and his program. Actually this was true of people throughout the country. They were bombarded with slanted media coverage and negative campaign ads that said Yushchenko was very nationalistic, that he wanted to split Ukraine and so on. And then you must realize that the governors in the eastern region know that if Yushchenko becomes president, they will lose their jobs. So they are fighting for their political survival. That's why they are pushing for secession. And Yanukovych is too.

Do you think Putin is supporting the idea of secession?

Yes, he's very pro-Yanukovych; he even campaigned for him and said publicly he wished for him to win. The whole idea of Yanukovych as a successor to Kuchma is very important to Putin -- because he himself was a successor, and he wants to hand his own government to a successor. If voters in neighboring Ukraine frustrate their government's succession plan, it sets a bad precedent for Putin in Russia.

What's the mood on the streets of Kiev?

The orange people, as the opposition people call themselves, are very happy. Orange is Yushchenko's campaign color. Yanukovych's colors are blue and white, so we call them the blue and white people. But the orange people are all smiling and singing. And when people from eastern Ukraine come to the center of Kiev, which is where the demonstrations are based, they give them tea and coffee and food. The orange people are dancing and singing our national anthem -- it's suddenly become our most popular song! (Laughs) Can you imagine?

So the winter cold is not dampening protesters' spirits?

Well, yes, it's very cold. It was minus 10 Celsius the other night. It's always snowing and sometimes there's a bitter wind. But people are very strong. I walk home from my office at 2 o'clock in the morning, and I walk through the tent city where the orange people are camped out. And people inside are dancing -- and they're not drinking or drunk. Most of them are young people. And during the day, a lot of people who live and work in Kiev drop by and give them food and offer their support. Every evening opposition leaders hold meetings, and there are hundreds of thousands of people in the streets. There are music groups. And they have even written new songs about the current situation, the revolution that is taking place. There's one popular song called "Yushchenko, Yes!"

I'm very proud right now of the Ukrainian people. It's like all the people are brothers. The other day I saw people from government offices, standing near their doors. And then two babushka walked by and stopped and said, "Are you OK, are you tired, are you cold? You can come to the tent city and have some tea." So people are just so happy with each other. They realize they can change something, they realize they are a nation -- for the first time since independence from the Soviet Union.

And people are even reaching out to the elite troops that are guarding the presidential administration buildings. Girls are laughing with them, they are dancing in front of them, they are trying to make them smile. Can you imagine!

So the people of Ukraine are reveling in their democratic strength for the first time since independence?

Yes, this is true. And this is why I am so proud. And I also realize that there is some small part of my work [as an independent journalist] and my soul in this revolution. That's why I am so happy.

Do you think of Georgi these days?

Yes, I do. And so do the people in the streets. There's a street in the center of Kiev called Bankova Street, which is where the presidential administration is located. And the people from the tents have begun calling it Gongadze Street. They know that once Kuchma is gone, it will be officially renamed Gongadze Street. Yesterday was the fourth anniversary of the day that a socialist leader released those tapes and everybody knew that Kuchma was involved in Georgi's death. [Kuchma has denied the validity of the audiotapes, on which he is purportedly heard ordering his security agents to eliminate the troublesome journalist.] It was the 28th of November, 2000.

Is Yushchenko in any danger right now?

Yes, everybody's in danger. But I believe everything will be OK.

Do they use the fact that he's married to an American woman against him?

Of course! All the time. "How can you be Ukrainian when your wife and children are American?" That's what they say.

Do you think there will be violence?

I hope not. But right now we can see that Yushchenko and Kuchma are talking in different languages. So they can't hear each other. Yushchenko is very democratic, very polite, he doesn't want to split Ukraine. But Kuchma has come out today in support of the deputies in the east who favor secession. The situation is still very much up in the air.

Is there any concern about Yushchenko's health? His face still shows signs of the mysterious poisoning he suffered earlier in the campaign (which the opposition leader charged was the work of government agents). Is he holding up all right?

I don't know, but he is working very hard every day. You can see him in the snow and the cold. I have not heard anything bad about his health from his supporters. But Yanukovych supporters like to play up the health question. They tell people that he will die in a few years, so who will be our president then. But he's looking very strong.