Woman with a loaded gun

Across 40 years and 61 novels, the icy-blooded Ruth Rendell has proven to be more than a great mystery writer -- she's one of Britain's finest living novelists. 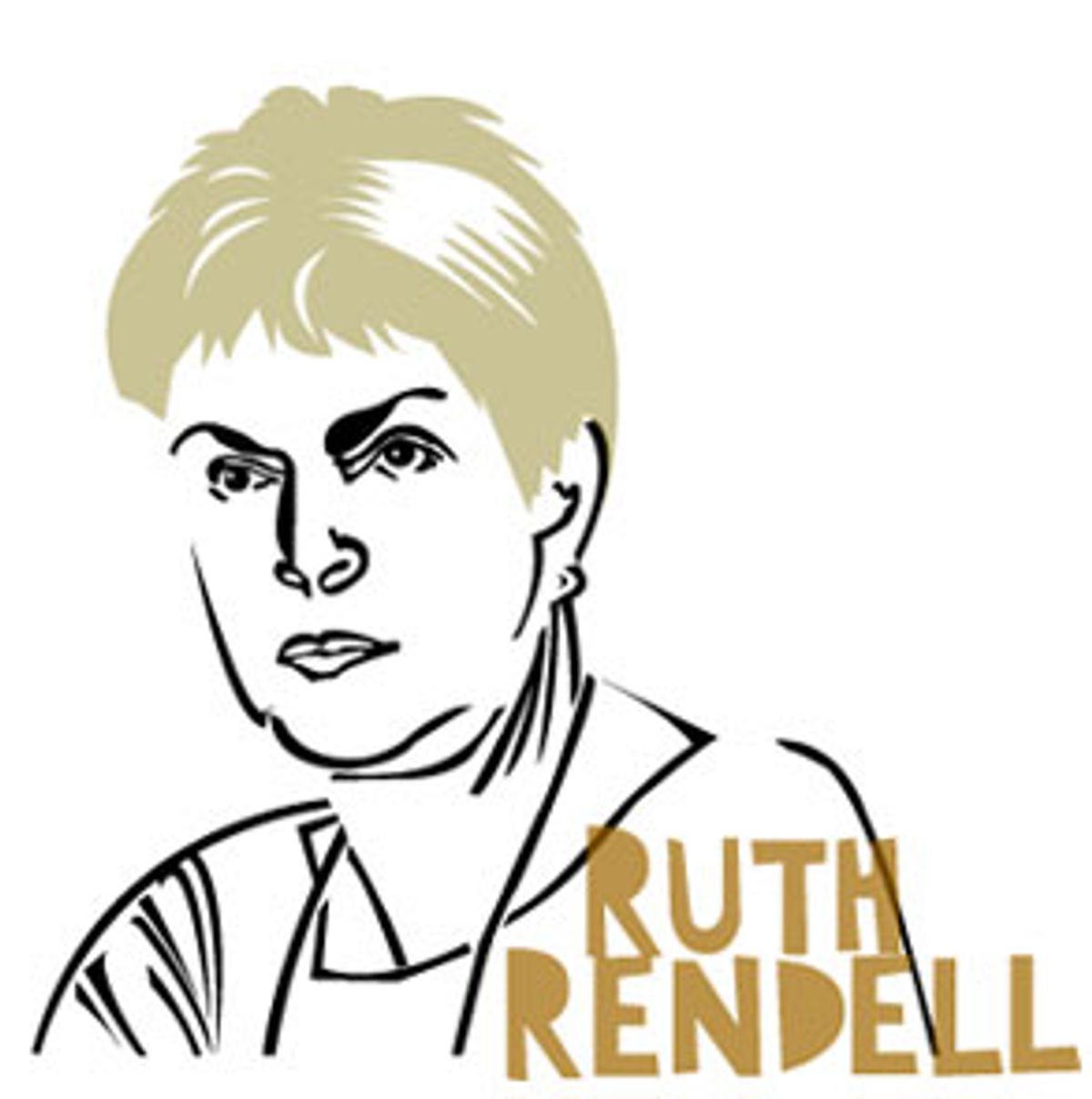 Years from now, an aspiring cartographer may attempt a map of 20th century London using only Ruth Rendell's novels as a reference point. James Joyce said he hoped "Ulysses" would allow the reader to reproduce a street-by-street map of Dublin. Rendell's work might only produce individual pockets, instead of the city as a whole. But those tucked-away sections of London could be rendered down to the cracks in the sidewalk, the grime on some windows, the flower boxes in front of others.

The self-containment of these individual neighborhoods is the point. The secrets that Rendell's characters clutch to their chests, like Fagin hoarding his most precious treasures under his grimy greatcoat, are hidden in quiet neighborhoods, placid streets, rambling old houses. The London of the 1960s in "The House of Stairs" and of the 1980s in "King Solomon's Carpet" (one of her books that can reasonably be called a masterpiece) have the nocturnal ominousness of Gothic novels set in the city a hundred years earlier.

"The park is deserted by night. That is, the intention is that it should be deserted," Rendell writes of a private enclave in a small London neighborhood in her 1996 "The Keys to the Street." "No vagrant could sleep undisturbed under the lee of the pavillions or the bandstand, but the police cannot search everywhere every night. The canal bank remains as a place of concealment amid the wide green spaces, and, in summer, the long grass under the trees." Does that passage describe an enchanted refuge? Or, since the small private park is inhabited by both the homeless and the killer impaling them on the park's spiked fence, something more sinister? And why can't it be both?

Ruth Rendell is not an either-or writer. She takes a grim view of human nature, which does not preclude empathy for her characters. Not for Rendell the cold, rancid misanthropy of the perpetually overrated Patricia Highsmith. The 61 books Rendell has written in the 40 years since her first, "From Doon With Death," appeared -- they include the Inspector Wexford series, stand-alone mysteries like her new "The Rottweiler," the 11 novels she has written under the pseudonym Barbara Vine, and seven short-story collections -- are about obsession. The subject is coolly observed in the Rendell books, and almost feverishly in the Vine books. To render obsession successfully you need to be, if not wholly sympathetic to the obsessed, at least aware of how they willingly make themselves look foolish. The paranoid states to which her characters are so susceptible would not rouse our anxiety so strongly if Rendell weren't able to pull us into some sense of complicity with them.

I don't mean to make Rendell seem a softer writer than she is. She can pass judgments withering enough to make you cringe, like these lines from "A Judgement in Stone": "'Norm and I always longed for kiddies,' she was in the habit of saying, 'but they never came. The Lord knew best, no doubt, and it's not for us to question His ways.' No doubt He did. One wonders what Joan Smith would have done with children if she had had them. Eaten them, perhaps."

Rendell's sensibility lies somewhere between the Gothic and the very sick joke. The kicker that awaits at the end of Rendell's "The Bridesmaid," the apotheosis of the book's morbid romanticism, is so flesh-crawling that it would make Emily Brontë laugh in sheer admiration. Newsday critic Gene Seymour recently observed, in discussing Rendell's latest Inspector Wexford novel, "The Babes in the Woods," that she isn't mellowing. If anything, Seymour said, she has become one of those people who has no inhibitions about saying exactly what she believes people to be.

Among mystery readers and writers, Rendell would come very close to the top in any poll asking who is the best working writer in the field. But the devastating precision of her prose also earns her a place among the best English social novelists of this century and the last. That's a wide list, including writers as disparate in temperament and style as Angus Wilson, Isabel Colegate, Elizabeth Taylor, Rose MacAulay, Mary Wesley, Jonathan Coe, Margaret Drabble, Alan Hollinghurst and Shirley Hazzard. No one, for instance, has written a better book about the stifling propriety of mid-century English middle-class life than "A Dark-Adapted Eye" (a Barbara Vine novel).

There will always be detractors who claim that Rendell does not transcend the mantle of clever mystery writer. But what then do they do with the first sentence of "A Judgement in Stone": "Eunice Parchman killed the Coverdale family because she could not read or write." As the novelist Val McDermid has pointed out, that is an absolutely radical sentence. If this is a mystery novel, then how do we account for the fact that Rendell starts the book by giving away the murderer, the victim and the motive?

The revelation of the killer's identity midway through "The Rottweiler" -- the title is taken from the tabloid monicker for the book's killer, named for the bite mark on the first victim's neck -- is not a radical move. In fact, it fits very neatly into Alfred Hitchcock's opposition of surprise and suspense. The premise -- a serial killer murdering young women in the Lisson Grove section of London, taking items from them as souvenirs, items that turn up amid the bric-a-brac in a neighborhood antique shop -- could almost be the setup for the sort of Charlie Chan conclusion when the detective assembles all the suspects in a room and unmasks the killer. Who will it be? Inez, the widow who owns the antique shop? Zeinab, Inez's drop-dead gorgeous assistant, who is keeping two rich suitors dangling while happily receiving their pricey tributes? Or the tenants who reside in the building Inez owns -- the mentally retarded laborer, the beautifully mannered young businessman, or the oft-married Russian beauty and her nosy paramour?

I hate to say that Rendell disdains genre convention or "transcends the genre." That would imply that the form she's working in is by its very nature unworthy, and only hacks work for 40 years in a form they disrespect. But genre is not the only way to explore the anxiety and deception that is Rendell's subject, and while she delivers the narrative satisfactions of mystery, she also, in "The Rottweiler," tweaks the form.

No brilliant inspector will assemble the suspects at the climax of this book for the very simple reason that the detectives on the case are fools. Rendell's contempt for the ham-fisted senior detective is shown by her giving him the same surname as that of England's most notorious wife killer, and his subordinate is a young up-and-comer who thinks himself terribly clever because he has a psychology degree. Of course, the suspect he definitely eliminates is the killer.

Inez, along with her co-workers, tenants and friends, are this novel's version of the self-contained community found in most Rendell books, a community in which each member has his or her secret, from the mundane to the deadly. In Rendell's black comedies of manners, the subject is the public consequences of private deception, what results from the crossed wires and mixed signals that connect the characters to each other. Rendell is a master of the tires-on-ice moment, the moment when the intersecting elements begin their inexorable slide into calamity, or at least to the collapse of the characters' various carefully maintained facades.

The ease with which Rendell gets into the mind of the killer, the contrast between the placid surface and the roiling substrata of criminal derangement, is the very thing that makes her books so unnerving. (Next to the horrendous plausibility of Rendell's murderers, the fethishized mastermind serial killers found in the work of Thomas Harris and his imitators look like the funhouse dummies they are.) The murderer in "The Rottweiler" has been given a Freudian motive that is unusually pedestrian for Rendell, but she has also provided a trigger for his murderous impulses that verges on the baroque.

But the thoughts of the "normal" characters in Rendell's novels can be just as uncomfortable, in all kinds of ways. There's a queasy poignancy to Inez's solitude; she spends her evenings watching videos of the television cop show her late husband starred in. The sections involving Will, Inez's mentally handicapped tenant, and the aunt who tries to care for him, are the book's most resonant and discomforting. Will's aunt, Becky, is caught in the trap many good people find themselves in: She's conscious of her duty to her nephew as his only living relative, but she has the perfectly reasonable desire not to give up her own life. The guilt Becky feels over that conflict is, at moments, almost intolerable. Rendell doesn't provide an out. She presents Becky's dilemma as exactly the quiet, enduring nightmare many of us fear caring for a loved one will become.

"The Rottweiler" is not Rendell at her deepest, and her conjuring powers are more potent elsewhere (particularly in the best of the Barbara Vine books). Someone just starting Rendell might do better by beginning with "A Judgement in Stone" (an attack on both ignorance and sophistication, the book turns into a live grenade in your hands, attacking the cultured sensibility that allows you to enjoy it in the first place), the wicked comeuppance tale "A Sight for Sore Eyes," the Vine books "A Dark-Adapted Eye" or "King Solomon's Carpet," or one of the Inspector Wexfords. But "The Rottweiler" is another brick in a body of work that constitutes one of the most precise and unflinching contributions to contemporary English fiction.

Rendell, the craftsman of intricate, ingenious plots, the purveyor of chilly, black-humored explorations of the squirmier parts of the psyche, is also one of modern fiction's few true moralists. "'She would of been a good woman,' The Misfit said, 'if it had been somebody there to shoot her every minute of her life.'" That's the killer in Flannery O'Connor's "A Good Man Is Hard to Find" speaking of an old woman he's just shot. Rendell lies in wait for all her characters, like the cocked and loaded gun they were never fortunate enough to run into.