Whose party is it anyway?

Harry Reid may be the Democrats' new Senate leader, but this week, blue eyes are on Howard Dean. 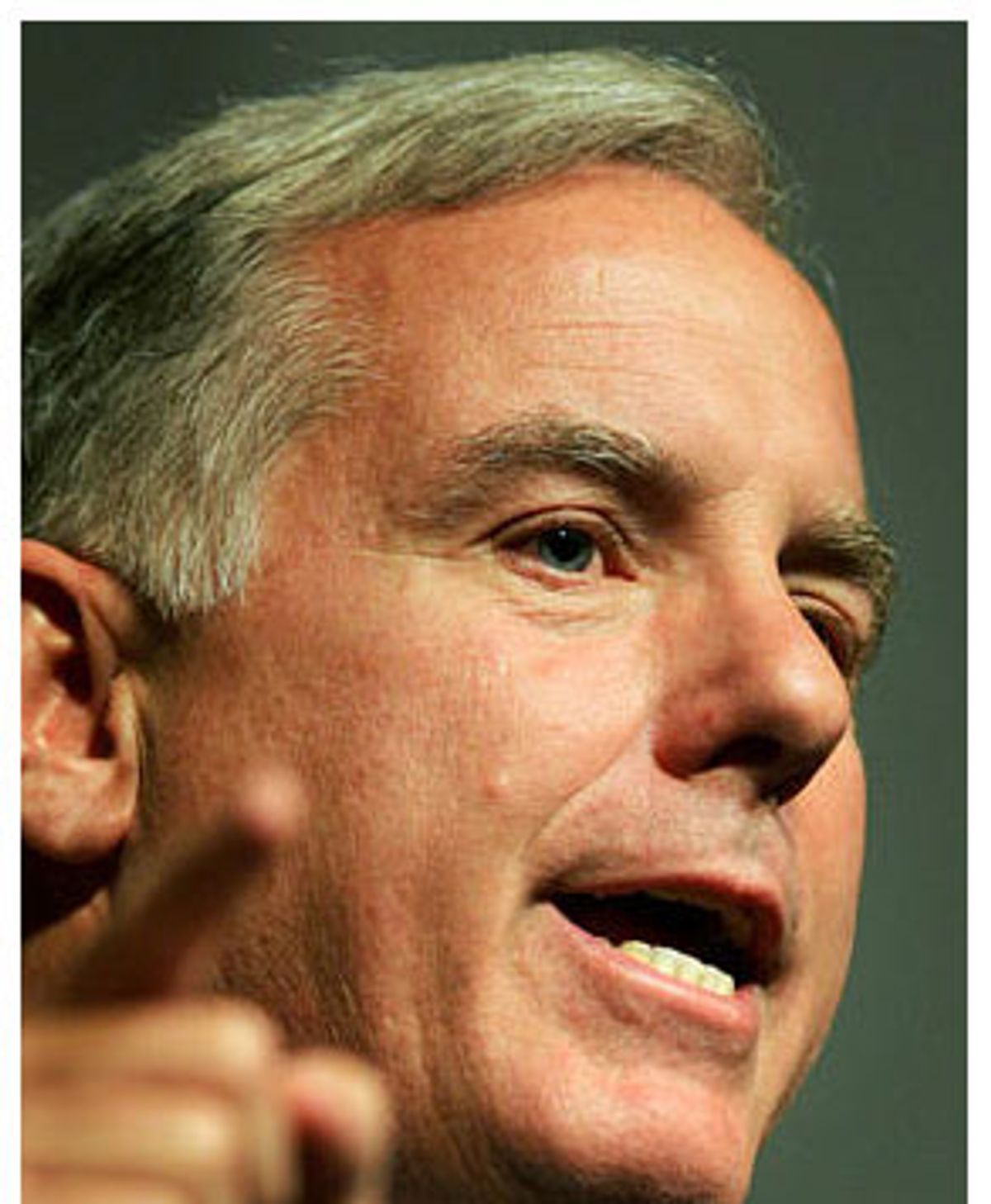 Harry Reid may be right. For a party that came within 119,000 Ohio votes of ousting a sitting president in a time of war, the Democrats are sounding awfully defeated these days. There's talk of making the most of long-term minority status, of compromising on judicial appointments and "moral issues" like the rights of gay couples and women -- Reid, the Democrats' new Senate leader, is anti-choice -- and of trying to figure out some way to outflank the Republicans from the red-state right.

And then there's Howard Dean.

The once-and-maybe-future presidential candidate has kept a relatively low profile since election night, but that's going to change Wednesday, when Dean delivers what his aides are calling a "major speech" in Washington. The subject: Dean's vision for the Democratic Party. The not-so-hidden subtext: his role in it.

On the night after John Kerry lost to George W. Bush, Dean told supporters on a Meetup conference call that the Democratic National Committee is "at a crossroads" and that DNC members "have questions to ask themselves." But now, as Dean prepares for his Bush II coming out and weighs a bid to replace Terry McAuliffe as the head of the DNC, it's the DNC members who have questions for Dean: Where does he want the party to go, and is he willing to put aside his own presidential aspirations to help take it there?

Dean will address the first of those questions Wednesday. He'll argue that the Democratic Party should be rebuilt from the grass roots up, that it should be driven by millions of Americans who make small contributions rather than by a handful of moneyed interests, and that the party should focus not just on presidential politics in swing states like Ohio and Florida but also on down-ballot races even in the reddest of states. On matters of substance, Dean may not resurrect his borrowed line about representing the "Democratic wing of the Democratic Party," but you can count on him to make it clear he isn't joining the "go along to get along" wing of the party, either.

"If you want to win, you have to fight, and you have to stand for something," Dean wrote in a Web column a few days after the election. While centrist Democrats like Reid were scrambling to find common ground with the president and the red state voters who elected him, Dean used his first sustained election postmortem to proclaim his disagreement with Bush "on almost every direction he takes us in."

Dean's unequivocal anti-Bushness is red meat for progressive Democrats hungry for something beyond the empty calories of "Fuck the South." The liberal blogosphere -- which played both father and son to Dean's presidential run -- has all but demanded that Dean be chosen to lead the Democratic Party when the DNC meets in February. In Oregon, the race for a spot in the state's DNC delegation turned into a blog battle over which candidate would offer the strongest support for Dean's as-yet-undeclared candidacy. In Washington, DNC member Donna Brazile said Monday that she has received so many e-mails from Dean supporters that her Blackberry has died from the abuse.

There's no question that Dean can inspire the Democratic base. And as a former governor -- albeit of a tiny state -- and a presidential candidate who helped revolutionize political campaigns, Dean has a track record that suggests he has the organizational skills necessary to make the Democratic Party work. But a good résumé and the impassioned pleas of a thousand dailykossacks does not a DNC majority make. Brazile -- who may or may not have been in the race but is out now -- says Dean has only "lukewarm" support from party insiders. If Dean decides to run, she says, "You'll see the same forces that tried to derail his campaign reconstitute themselves as an anti-Dean bandwagon."

In the primaries, the anti-Dean movement was aided and abetted -- if not led -- by friends of the Democratic Leadership Council, whose Al From and Bruce Reed dismissed Dean's supporters as "activist elites" and railed against the "misguided notion that the hopes and dreams of activists represent the heart and soul of the Democratic Party."

Will arguments such as these hold sway with Democrats after Kerry's loss? It's hard to know. For every Democrat who believes Kerry lost because he was seen as "too liberal" on gay marriage or taxes or God knows what else, there's another who believes he handed George Bush the presidency by refusing to hit him harder on Iraq. Kerry consistently criticized Bush's handling of the war. But in his own refusal to admit a mistake in voting to authorize the war, Kerry denied himself the unequivocal antiwar argument that Dean made forcefully in the Democratic primaries. Kerry's approach represented the sort of centrist pin-dancing the DLC may favor, but it doesn't speak to Democratic activists -- elite or otherwise -- who are looking for someone to guide them out of their post-election despair.

Of course, many of those activists have larger aspirations for Dean. They wanted him to be the Democrats' presidential nominee in 2004, and they like the idea of his making another run for the nomination in 2008. For Brazile and many other DNC members, that's a problem. The DNC chairmanship is a full-time job, they say, and it shouldn't be filled by the chosen one of any potential presidential candidate -- let alone by a potential candidate himself. Brazile expects to meet with Dean in Washington before he speaks Wednesday; if he won't commit to not running in 2008, she said, she won't be able to support him for the DNC chairmanship.

Laura Gross, a spokeswoman for Dean's Democracy for America, said Dean's presidential aspirations are just one factor that will go into his decision whether to run for the chairmanship. She said he hasn't decided whether he'll run in 2008 -- let alone whether the desire to make such a run is incompatible with the chairmanship.

If Dean runs for the DNC job -- and gets it -- he may ultimately be able to have it both ways. If the Democrats surge in the 2006 election cycle -- if history and Dean's leadership conspire to win governorships and significant numbers of seats in the House and Senate -- then the party may be so enthusiastic about Dean's skills that he'll win widespread support for a presidential run. But there are a lot of "ifs" built into that equation, and it's not a contingency Dean can embrace -- at least publicly -- if he hopes to win the support of a lot of DNC members wary of picking a chairman who uses the DNC as his own personal exploratory committee.

Few -- if any -- of the other candidates carry that particular baggage. Iowa Gov. Tom Vilsack is a potential presidential candidate in 2008, but he has checked out of the DNC race. Other candidates in the race now are Harold Ickes, the former Clinton chief of staff; Ron Kirk and Wellington Webb, the former mayors of Dallas and Denver, respectively; Simon Rosenberg, the president of the New Democratic Network; businessman Leo Hindery Jr., and former Gore and Kerry advisor Donnie Fowler.

None of those candidates raise the same concerns Dean does, but none carry Dean's high public profile, either. That's a plus and a minus -- as even Dean's supporters acknowledge. Paul Maslin, who helped run Dean's primary campaign, is enthusiastic about his former boss's DNC candidacy. He's even comfortable with Dean's ability to avoid being caricatured as an out-of-touch Northeastern liberal.

"He ran for president because he wanted to do something about healthcare and the budget deficit, but then Iraq happened and he exploited an opening," Maslin said last week. "The party was being too meek and mild, and he said 'Hey, we've gotta fight.'" Maslin, who has talked with Dean about a DNC run, says the fight "still matters."

"I don't mean that we're going to be in pitched battle with George W. Bush over every single thing he does," Maslin said. "But there's a lot of things he does that still require Democrats to have a voice." As soon as he said it, though, Maslin acknowledged the problem of having that "voice" come out of Dean's mouth -- and it's one that a Harry Reid will never have. "That damned scream," Maslin said, and you could almost hear him shaking his head over the phone line. If the Democrats choose Dean to lead them, Maslin said, "We'll just have to accept the fact that Fox is going to show that clip for the next 1,046 days, or whatever it is. That's life."