"The Life Aquatic With Steve Zissou"

Wes Anderson's latest is a sight to behold. But is it a movie? 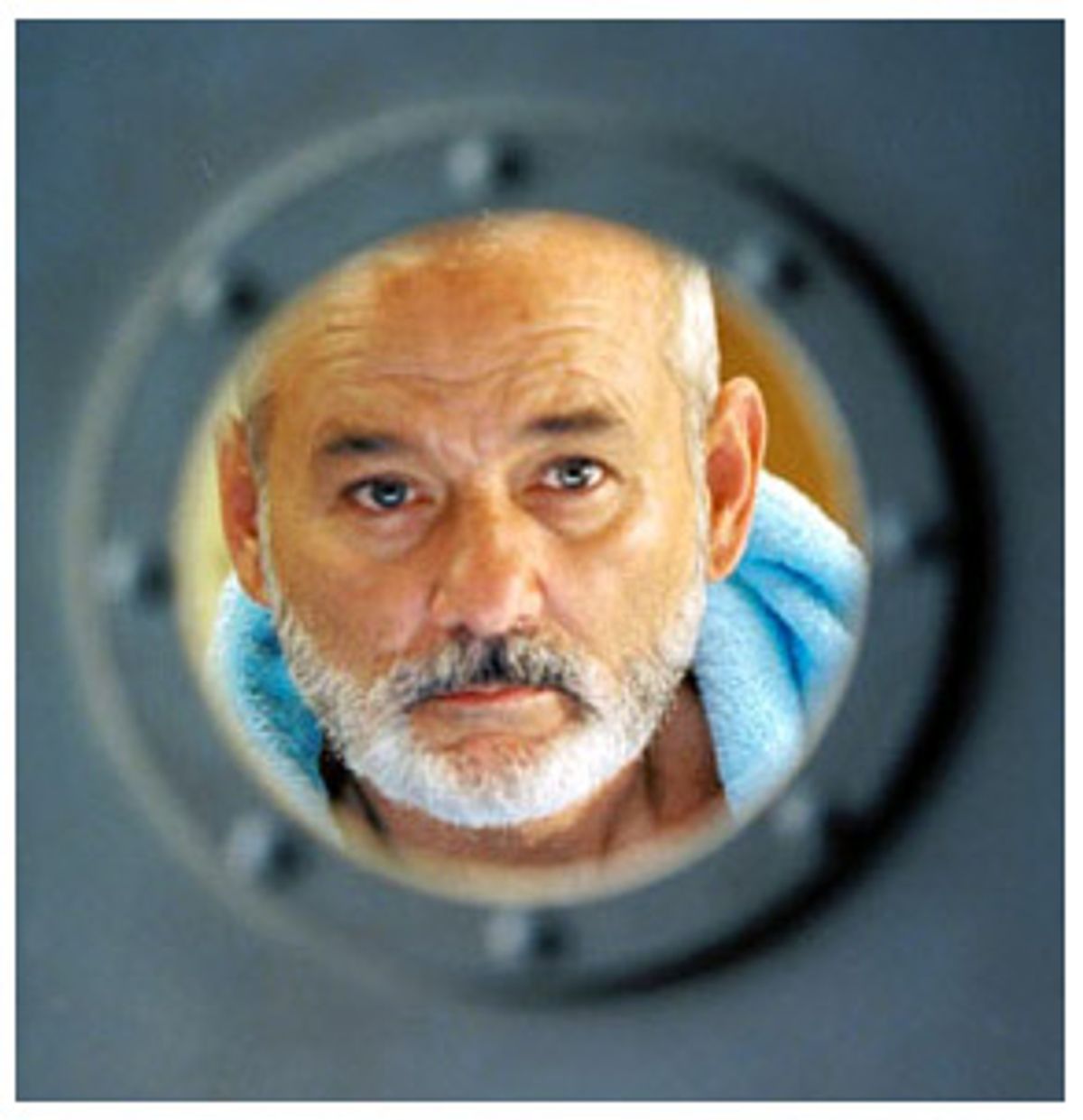 Wes Anderson's "The Life Aquatic With Steve Zissou" is like a very elaborate diorama in a shoebox -- which is fine, unless you go to it expecting to see a movie. The visuals in "The Life Aquatic" are calculated to inspire delight: A multicolored, candy-striped seahorse hovers placidly in a champagne glass; as a mini-submarine scoots through the water, a giant shark decorated with big-cat stripes looms in front of its nose; a ship is glimpsed in a dollhouse-style cross-section so we see the hustle and bustle that goes on in its various rooms and chambers (a visual trick borrowed from the Jerry Lewis picture "The Ladies' Man"). Shot by Robert D. Yeoman (who worked with Anderson on "Rushmore" and "The Royal Tenenbaums," and also shot Roman Coppola's sorely underappreciated "CQ"), with Mark Friedberg as production designer, "The Life Aquatic" gives us some wowee visuals. But there's no emotional texture to them, and the story (written by Anderson and Noah Baumbach) meanders in such a meaningless way that the visual details, as carefully wrought as they are, come off as mere props. Neither lifelike nor aquatic, "The Life Aquatic" is static in a weirdly hyperkinetic way.

Bill Murray plays the Steve Zissou of the title, an aging sea explorer surrounded by a team of researchers (Willem Dafoe and Noah Taylor are two of them) who stick with him through thick and thin. (Zissou outfits them in matching red caps and black turtlenecks; at night they all wear identical pj's.) The world knows Zissou from his Jacques Cousteau-like documentary films (they have titles like "The Battling Eels of Antibes"), but his fame and influence are on the wane. Worse, he's distraught by the recent death of his closest friend and colleague, Esteban (Seymour Cassel), who, during the making of their last film, was bitten in half by a lethal creature with a fanciful name, the jaguar shark. Zissou vows revenge on the shark, but he has other problems as well: A young pilot named Ned (Owen Wilson) shows up on the scene, claiming to be Zissou's son, the product of a long-ago liaison. Plucky, pregnant, ruddy-faced journalist Jane Winslett-Richardson (Cate Blanchett) has become part of his entourage, and her questions aren't always friendly. And Zissou's dismissive, blasé wife, Eleanor (Anjelica Huston), whom many believe to be the real brains of his operation, may have run back to her former husband, Zissou's chief rival in the undersea-exploration biz, spoiled rich guy Alistair Hennessy (Jeff Goldblum).

With all those characters crisscrossing one another at every turn, you'd think there'd be a lot going on in "The Life Aquatic With Steve Zissou." But even though the picture does feature a pirate attack (which is surprisingly rough and jostles the tone of the movie) and an island rescue scene, in which many of the characters scamper about antically during a shootout, very little actually happens in the movie -- it's a concept desperately in search of a story. The chief idea, I suppose, is that Zissou is a cranky loner who pretends to like animals and people but who really cares little for either -- he needs to undergo some sort of transformation.

It's the sort of character Murray always plays superbly (particularly in the 1988 "Scrooged") because he's too self-possessed to ever be dopily sentimental. And he's fine here, showing threads of grizzled humanity beneath all that deadpan grousing and grumbling. Anderson's movies may be self-congratulatory and precociously bratty, but he's not a cold director: "The Life Aquatic" does seem to have been motivated by a generousness of spirit, and obviously, Anderson is acutely aware of, and very interested in tapping, what's special about Murray as an actor. And yet the picture just feels too overworked, too "designed," to resonate emotionally. When Wilson's Ned realizes that Zissou knew of his existence, he asks, "Why didn't you contact me?" Zissou replies, "Because I hated fathers and I never wanted to be one." It's a snappy line, which is precisely the problem: At every turn, "The Life Aquatic" seems far too taken with its own cleverness. There's no sense of adventure to it, nothing in it for us to discover -- everything is handed to us with a well-rehearsed flourish.

That's a shame, because the first half-hour or so of "The Life Aquatic" seemed to promise something different. The opening sequence shows us archival Zissou footage of Esteban smiling behind his diver's mask, mugging joyously as a school of hot-pink fish shimmy around him. We like Esteban instantly (He is, after all, played by Seymour Cassel.) And almost instantly, he's dead: Somehow, looking at that footage, we understand exactly what he means to Zissou. And there's something hilarious about the way Huston's Eleanor sidles up to her ex, Alistair, who's decked out in a jacket encrusted with gaudy medals, and purrs, "Hello, skinny. Is that a new merit badge?"

Individual instances of Anderson's oddball dialogue work very well in "The Life Aquatic." Still, the picture falls apart scene by scene. The relationships between the characters seem vague and indistinct -- we care about them less, instead of more, as the picture paddles on. That's frustrating, because it's possible that there's a fine, idiosyncratically heartfelt little picture buried somewhere in "The Life Aquatic." But as young as Anderson is, he has already been hailed as an "original," which means, unfortunately, that he's apparently exempt from learning anything about giving his movies some bone structure. Anderson hasn't yet grasped that although novelty is exciting for a time, before long it just becomes wearying. "The Life Aquatic With Steve Zissou" is overburdened with knowingly charming touches. It's waterlogged with whimsy.