George Clooney, Julia Roberts, Brad Pitt, Matt Damon: The gang's all here and ready for another caper in this smart, stylish sequel. 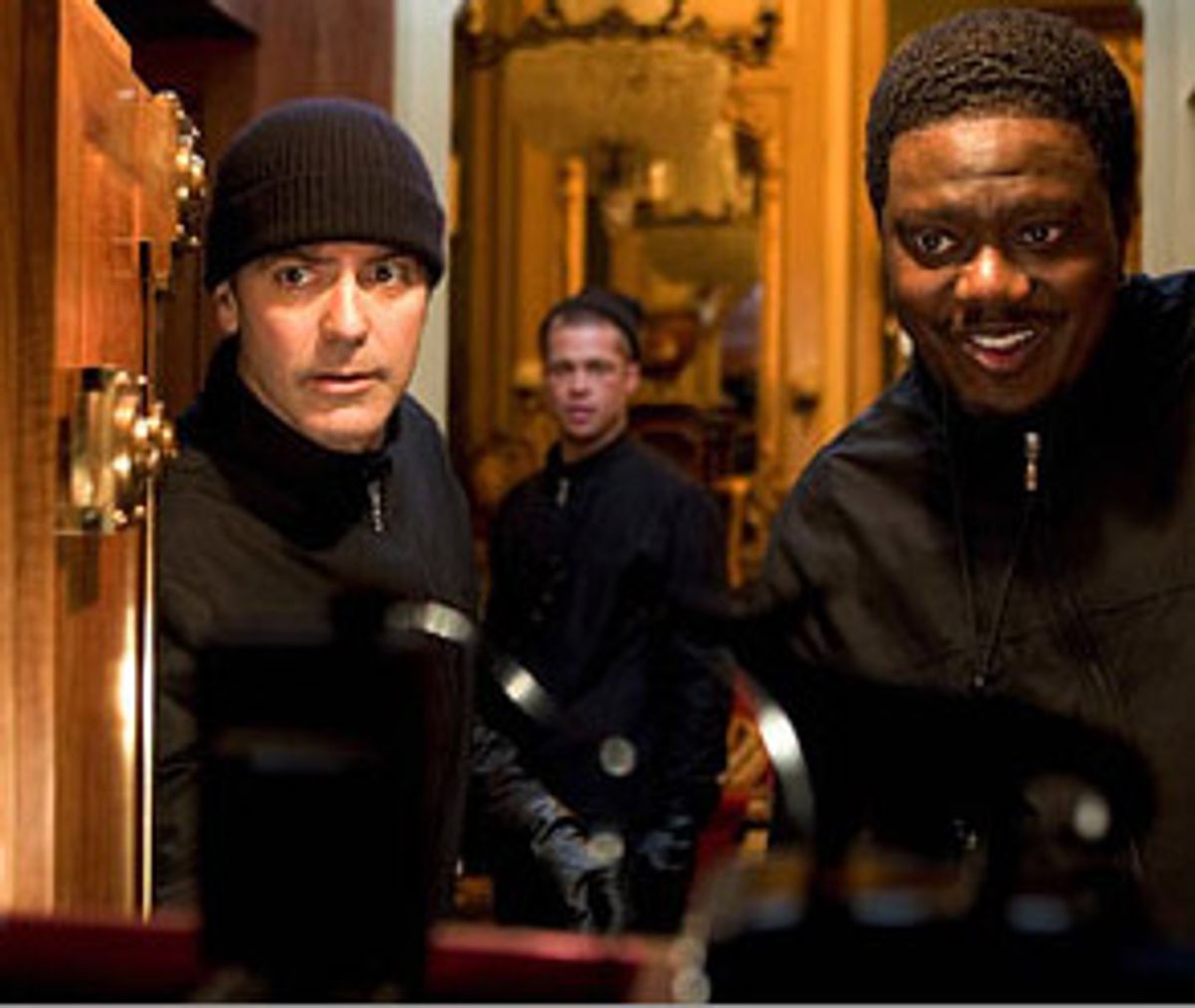 It's ironic -- or maybe it isn't -- that holiday time, when myriad chores, expectations and obligations leave many of us feeling stressed out and unaccountably depressed, is precisely the time so many bloated prestige pictures wash up like whale carcasses on the sandy shores of moviegoing. (The decaying-blubber stench of "Andrew Lloyd Webber's Phantom of the Opera," set to open in a few weeks, is already starting to drift landward.) So this is precisely the right time to reflect on the subtle glories of the well-made entertainment, the kind of picture that won't get its own themed display windows at Bloomingdale's (as "Phantom" has, in New York, courtesy of Joel "Once a Window Dresser, Always a Window Dresser" Schumacher) but probably should, given how much innate style it has.

"Ocean's Twelve," Steven Soderbergh's sequel to the immensely entertaining "Ocean's Eleven" (itself based on Lewis Milestone's 1960 heist comedy), isn't the kind of movie that wins awards or critics' prizes, but it's worthy of our respect just the same: It does the hard work of being a light, smartly turned-out amusement, the sort of thing that's becoming more and more rare on the movie landscape these days.

"Ocean's Twelve" picks up not where "Ocean's Eleven" left off, but three years later -- in other words, the 11, the ragtag outfit of thieves and con artists led by Danny Ocean (George Clooney), have had plenty of time to blow the $160 million they've stolen from thuggish Las Vegas casino fat cat Terry Benedict (Andy Garcia). Danny has settled down with his beloved ex-wife, Tess (Julia Roberts) -- the two are about to celebrate that most romantic of milestones, their second third anniversary. The others have enjoyed the fruits of their labor to varying degrees of excess: Detail man Rusty Ryan (Brad Pitt) has lost his share of the dough, and then some, in the hip-hotel business, while surveillance geek Livingston Dell (Eddie Jemison) works as a stand-up comic and lives at home -- he has barely spent a penny.

The problem is that Benedict, having been tipped off that it was Danny's crew who cleaned out his vaults, wants his money back, with interest. So the 11 gather from all corners of the globe, or at least from this or that state, to plan a new heist so they can get Benedict off their backs.

This new caper takes them to Amsterdam, where they meet with contacts in little cafes and huddle in Spartan hotel rooms, at first scheming to rob an agoraphobic zillionaire (played by Jeroen Krabbé) and later taking on the challenge, thrown down by a cocky thief who goes by the name "The Night Fox" (Vincent Cassel), to steal a hideously gaudy Fabergé egg. To make things more teasingly complicated, Rusty's onetime girlfriend, international crime expert Isabel Lahiri (the lustrously appealing Catherine Zeta-Jones), herself the daughter of a deceased thief, is on to their every move.

Much of the story is told sideways, and some of it backwards -- as with many of Soderbergh's pictures, the rhythms of "Ocean's Twelve" aren't fully predictable, which is part of what makes the picture so beguiling. (The script is by George Nolfi; the movie was edited by Stephen Mirrione, who also edited "Ocean's Eleven.") Soderbergh has a penchant for stylish details like jump cuts and snazzy geometric wipes, but he doesn't use so many of them that they distract us from the storytelling -- they're just little fillips, like the finish of a buttonhole or the slant of a lapel on a bespoke suit.

The whole of "Ocean's Twelve" is an inclusionary in joke -- it winks at us and at itself, sometimes pretty broadly, yet there's nothing tediously self-referential about it. The picture features several cameos, whose serendipitous pleasures I won't spoil for you. And Soderbergh has the good sense to realize that Julia Roberts is such a recognizable presence that it's almost crazy to ask an audience to believe in any character she plays. So he finds a way to meld everything we think we know about Roberts with everything we don't know about the character of Tess. Being any less cryptic would give away too many of the movie's surprises, but it's safe to say that Soderbergh makes Tess seem even more "real" than Julia Roberts, a feat I wouldn't have thought possible.

"Ocean's Twelve" is so nicely put together -- everything locks with a nice, satisfying click -- that it almost seems like a put-down to say that a large part of its charm comes from the shenanigans of its actors, many of which feel improvised even when they aren't. Clooney doesn't have the same dreamy movie-star hold he did on the first one: As much fun as "Ocean's Twelve" is, it could have used more of him. (He gets his best moment when he earnestly tells a bank clerk, barely blinking his luxuriously devilish eyelashes, that he's a former high school basketball coach -- obviously, a very rich one.)

But some of the characters who were too blurred in the earlier movie become more distinct in this one -- in particular, Matt Damon as young upstart pickpocket Linus Caldwell. At one point he and Turk and Virgil Malloy (the twins played by Casey Affleck and Scott Caan) try to hatch a scheme to rescue the remainder of the 11 from a pickle they've gotten themselves into. They reel off a number of mysteriously named ploys: "How about 'Hell in a Handbasket'?" one of the twins suggests. "No," Linus says resolutely, his brow furrowed in thought, "we can't train a cat that quickly."

Nearly every character gets his or her share of good lines. Carl Reiner, returning as old-time flimflammer Saul Bloom, gets to utter the immortal words, "Often pregnant women become ambidextrous." (It makes about as much sense in the movie as it does on the page, but it makes you giggle anyway.) The outlandishly exquisite Elliott Gould returns, in bow tie and Swifty Lazar horn-rims, as bean counter Reuben Tishkoff. He has parlayed his portion of the stolen money into a small fortune, which, at the start of the 11's troubles, he offers up to help alleviate the group's debt to Terry Benedict. With guileless affection he asks his compatriots, "Who would I talk to if you were all dead?"

Some characters get very few lines and still manage to make an impression: Yen (Shaobo Qin), the "grease man," doesn't say much at all, but he does fold himself up into a duffel bag, which is no mean feat. (When he's not appearing in Steven Soderbergh movies, Shaobo is a member of the Peking Acrobats.)

Other characters, notably Don Cheadle's explosives expert Basher Tarr and Bernie Mac's manicure-loving safecracker Frank Catton, have little to do, which is a shame. But they still manage to seem like a necessary part of the whole. "Ocean's Twelve" is, after all, a buddy movie with lots of buddies. The interplay between and among the characters, even more than the mechanics of the plot, is what matters, and once again, Soderbergh manages to keep most, if not all, of his characters spinning at once. His great skill lies in making it all seem so easy. That, after all, is the gift of the innately stylish. The rest is just window dressing.