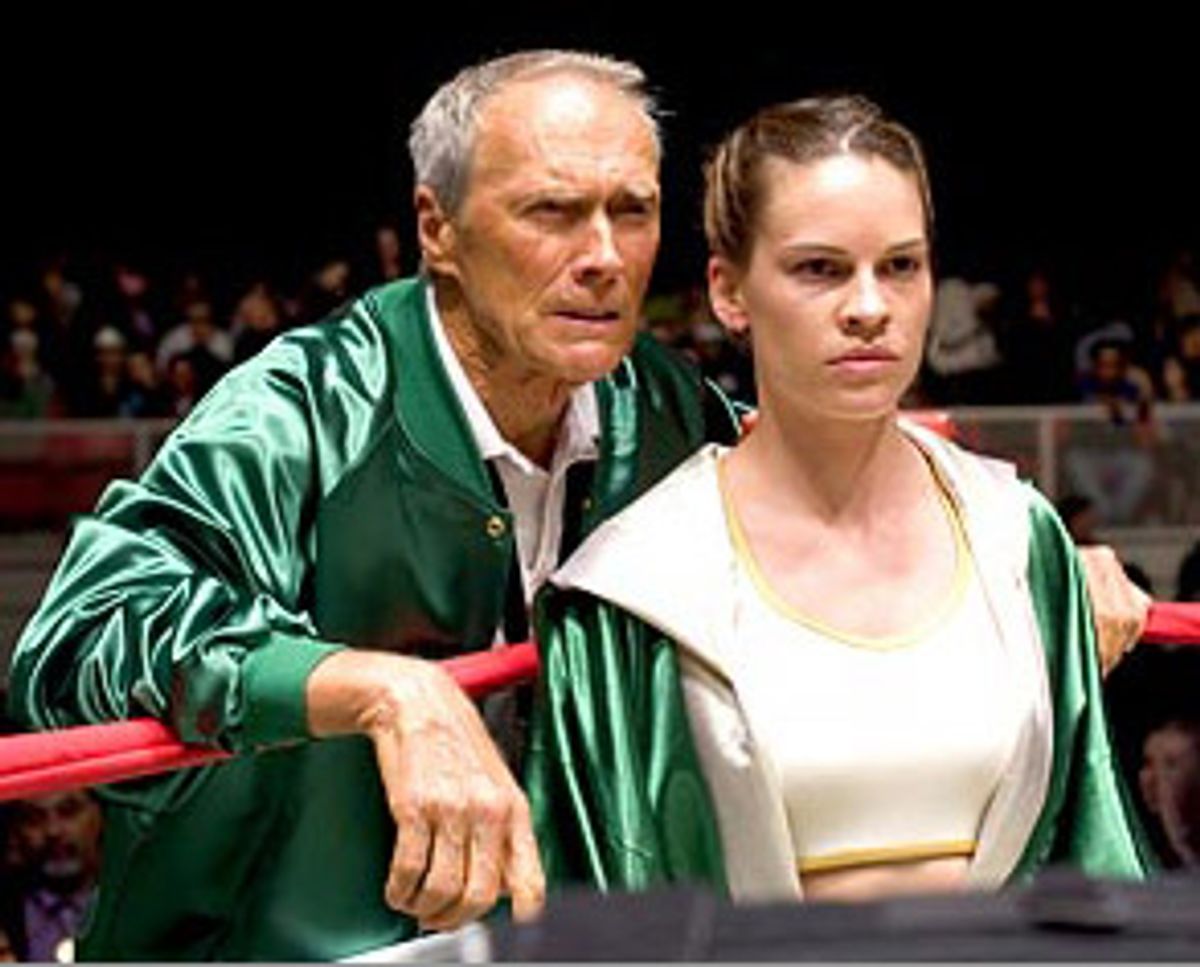 Is Clint Eastwood the Manchurian Candidate? He must be. Brainwashing seems the only plausible explanation for the extraordinary praise given his drab, plodding movies. The overdeliberate, humorless revenge drama "Mystic River" was directed and hailed as if it were Greek tragedy -- and next to Eastwood's new "Million Dollar Baby," it is.

Have any of the critics praising "Million Dollar Baby" actually ever seen another movie -- any movie?

A compendium of every clich&eacute from every bad boxing melodrama ever made, "Million Dollar Baby" (written by Paul Haggis from stories by F.X. Toole) tries to transcend its cornball overfamiliarity with the qualities that have long characterized Eastwood's direction -- it's solemn, inflated and dull.

Eastwood plays Frankie Dunn, a journeyman boxing trainer who has never gotten a shot at a title. Shortly after the movie begins, a boxer who seems to offer Frankie a chance at just that deserts him for another manager. Frankie seems destined to remain stuck in his ratty old Los Angeles gym, along with his avuncular sidekick, a former boxer named -- no kidding -- Scrap (Morgan Freeman), seemingly to end his days training one second-rater after another.

Scrap steers Frankie to Maggie (Hilary Swank), a waitress already in her 30s (in other words, an age at which many boxers are starting to think of retiring) who has been haunting the gym, diligently, if not very skillfully, working out. After some persuasion from Maggie, Frankie takes her on and she turns out to be a winner, bringing Frankie closer and closer to his dream of a shot at a title.

Over the course of his career, Eastwood has gone from playing the Man with No Name, a "Don't mess with me" loner, to playing a series of sentimentalized old geezers. Frankie is the latest. There's some unspecified heartbreak in his past involving a daughter he writes to faithfully every week. (The letters are always returned.) And if the alienated daughter and dashed dreams aren't enough fodder for the blubber machine, there's the thread that runs through the movie of Frankie trying valiantly to hold onto his faith, attending Mass every day, saying his prayers at night.

How can audiences not laugh at the sight of Eastwood moaning and groaning as he drops to his knees to say his bedtime prayers? It's not the act of prayer that's worthy of being laughed at -- it's Eastwood's cheap grab at audience sympathy by playing up Frankie's aches and pains. Eastwood, still in fine condition at 74, wears his pants hiked up so that it looks as if his belt is trying to locate his nipples.

"Million Dollar Baby" features not just one wise old codger but two. When Eastwood and Morgan Freeman share the screen they act as if they're in a competition to win the right to be called "Pops." (Can remakes of "West Side Story" or "Song of the South" be far behind?)

At least when Burgess Meredith did this stuff in the "Rocky" movies he had the good hammy sense to treat it like the hokum it was. "Million Dollar Baby" is a piece of ham intended for those who keep kosher. Its dried-out, humorless achieved grubbiness is meant to purify it, to lift it above its melodramatic roots. Eastwood's performance is one long wince, and he directs as if it would hurt him to throw in a little lightness, a little color, one scene that didn't look like it was shot in a gas station bathroom.

The alleged cinematography by Tom Stern is a visual insult. At times Stern seems to be trying to see how many different shades of dingy green can fit into one picture. And, as almost all of Eastwood's films are, the movie is so underlit that you begin wondering if somebody at Warner Bros. forgot to go shopping for light bulbs.

Everything about the movie looks and feels irredeemably cheap. A Vegas title fight being telecast on HBO looks like a smoker at a V.A. hall. And though Maggie moves up the ranks of boxing, and we hear her talk about getting her picture in magazines, we never see a photographer or reporter around her. Eastwood seems to think he can make a title bout look different from the grimy boxing clubs where Maggie fights simply by populating the front rows of the audience with a few sparse extras dressed in gowns or suits.

There are a few crumbs of pleasure: a montage of Maggie dispatching one opponent after another with first-round knockouts. The two scenes between Swank and Freeman, particularly the one where he trains her to work the punching bag, have a nice, unforced actors' rhythm. And I cherish one shot of Swank sitting in a car at a gas pump, giving the full dazzle of her smile to a little girl and her dog across the way. Swank melts you in that moment, without any of the script's phony, trumped-up drama.

She's such an unadorned actress that she manages some believability in a contrived role and contrived surroundings. She has to say things like, "Ah don't rahtly know" and play country polite. (This is a movie in which integrity is measured by a pronunciation like "Missourah.") You don't buy it, but Swank works her tail off, and she earns our respect for trying to do honest work.

It becomes increasingly hard for Swank to keep a sense of reality in her performance as the movie grinds on. Maggie undergoes a torrent of physical punishment (you could say she's "Caviezel-ed") and the movie takes an outrageous melodramatic -- and wholly unbelievable -- turn. (It depends on a prestige fight being allowed to go on well past the point where it would be stopped. Maybe Eastwood is counting here on the squeamish misconception of boxing as sheer unregulated brutality.)

But it's the po-faced portentousness with which Eastwood presents the movie's ludicrous developments that seems to wow his admirers. The movies are full of examples of directors who have transcended hokey material. But usually those filmmakers do it by going so intensely into the emotions of the piece that (as in Dickens) what's sentimental becomes transcendent. Eastwood takes the opposite approach -- he thinks that he can turn hokeyness into tragedy by pretending that the material isn't hokey, by dragging it out and drabbing it down.

Eastwood often talks about what he learned from the two directors he is most closely associated with, Don Siegel and Sergio Leone. ("Unforgiven" is dedicated to them.) But he has nothing of Siegel's brutal efficiency and none of the expansiveness of Leone's crude and lyrical mythmaking. Eastwood's admirers would place him even higher, in the pantheon of great American filmmaking next to John Ford and Howard Hawks.

That talk has gotten more and more common in critical circles ever since "Unforgiven," and it seems to me a real misunderstanding of our movie heritage. There were plenty of clichés in the movies of the great commercial directors of the '30, '40s and '50s, sometimes because they worked so much, sometimes because they were saddled with second-rate material. But those directors also worked to make that material emotionally real, to find ways to dress up what was secondhand in the scripts they shot.

"Million Dollar Baby" pretends to be grounded in a true gritty view of life, but everything in it feels lifted from old movies -- the most laughable old movies. (You keep expecting the cast of "The Carol Burnett Show" or "SCTV" to come in and take over.) Eastwood falls heavily and clumsily over the conventions and clichés that the great Hollywood directors of the past elided, and for that obviousness he's hailed as a classicist. Maybe because, for his admirers, Eastwood's deadening seriousness gives his pictures something like the tone of art films. (I can see the theses now: "The Community as Prison: Suspicion and Revenge in 'Day of Wrath' and 'Mystic River,'" or "Darwinian Dialectic in 'Every Which Way but Loose.'")

Many of the scenes between Eastwood and Swank are taken up with her trying to figure out the Gaelic slogan he has chosen for her robe: "Ma Cushla." (Frankie likes to read Yeats.) The meaning is revealed in the movie's big lump-in-the-throat moment. For American critics this Christmas, "Ma Cushla" has another meaning: suckered.