The Grinch who saved Christmas

Battling the homosexuals, liberals and Jews, Bill O'Reilly and friends are making America safe for Christmas. 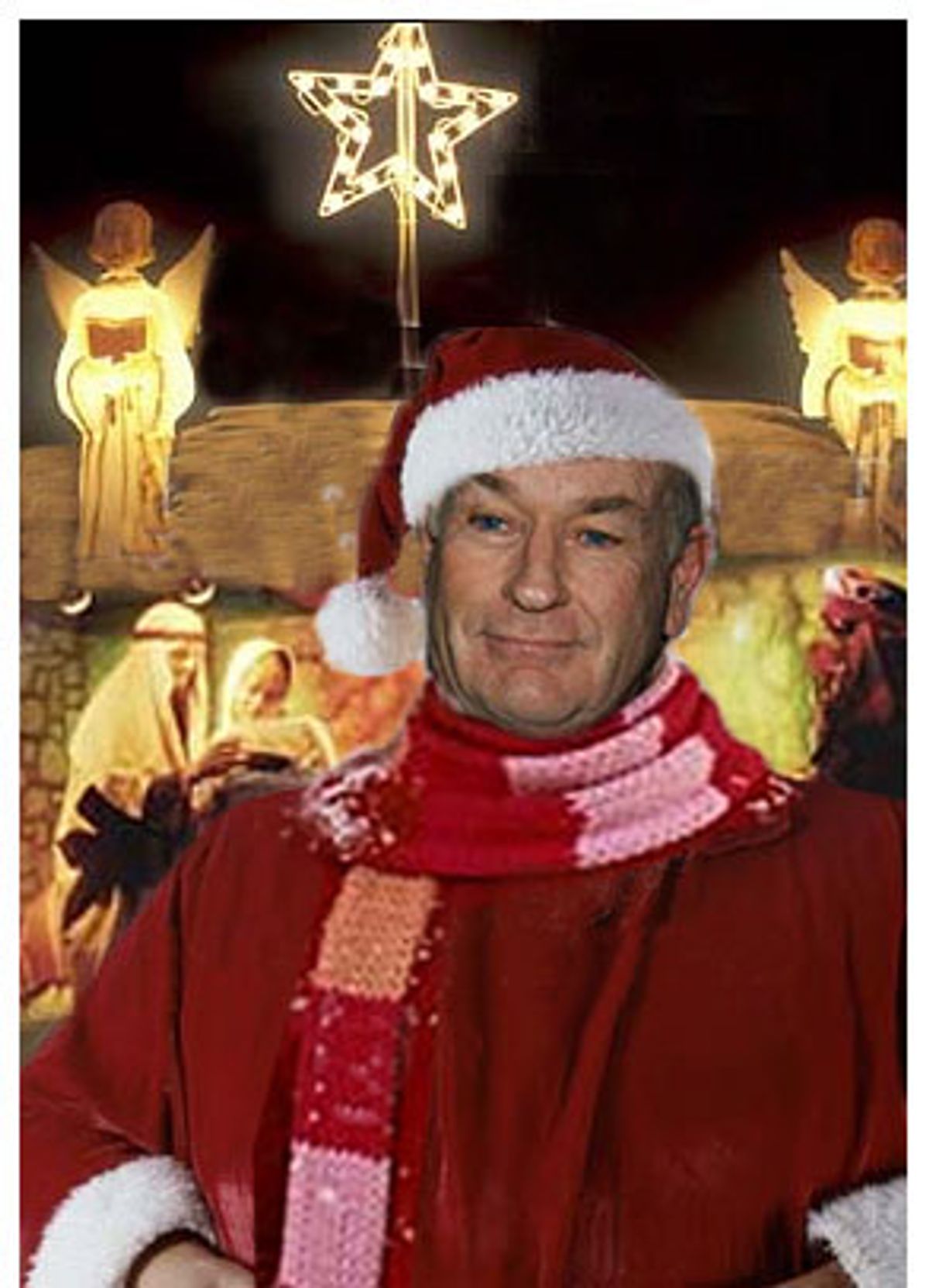 For most people, Christmas may be a time of peace and joy, but for Bill O'Reilly it's another chance to wage an us-vs.-them cultural war. O'Reilly and Fox News, along with a cadre of hard-charging right-wing talkers, have declared war on the anti-Christmas crowd, that dangerous mix of radical secularists and school board do-gooders determined to "bring about their own Godless version of this nation," as Rev. Jerry Falwell wrote in a column published Monday on the conservative Web site WorldNetDaily.com.

The thorny issue of striking the proper balance between America's predominant Christian population and the country's historic separation of church and state returns every holiday season like unwanted fruitcake. But as ABC News recently noted, "This year, people in red, or Republican America -- particularly Christian conservatives -- are in an unprecedented uproar."

Fresh off Republican wins in November, O'Reilly and company have ratcheted up the rhetoric. Mixing a kernel of truth with a grab bag of unconfirmed anecdotes, as well as some outright falsehoods, and then repeating the dire warnings, they've helped manufacture the impression that a tidal wave of anti-Christian activity, fueled by Democrats, is threatening to drive Christmas underground in America.

"All over the country, Christmas is taking flak," O'Reilly recently announced, as he complained about "the anti-Christmas jihad" that's gripping the nation. "If they could, secularists would cancel Christmas as a holiday. That's how much they fear the exposition of the philosophy of Jesus." During his syndicated radio show O'Reilly intoned darkly, "The small minority that is trying to impose its will on the majority is so vicious, so dishonest -- and has to be dealt with."

Fox News pundit Morton Kondracke recently argued, "The logical extension of what [secularists are] saying is [to] ban Christmas." Meanwhile, his colleague Tony Snow concocted stories about how "you're not allowed to say 'Merry Christmas' in a lot of department stores" and then complained it was part of an elaborate "attack on Christianity." (Snow was apparently referring to a decision by Macy's to change its official store greeting to "Happy Holidays." Obviously people are still allowed to say "Merry Christmas" -- or whatever else they want to -- inside the stores.)

Since O'Reilly began chronicling how Christmas was "under siege," the host has been using a slew of vague catchphrases -- "those people," "these creeps," "secular progressives," "the secular bunch," "extremists" -- to describe the lurking, godless forces who want to take Christ out of Christmas.

But during his Dec. 3 radio show, O'Reilly got more specific. When a caller identified himself as Jewish and began to complain about "the secularization of Jews and about Christmas going into schools," O'Reilly shot back that "overwhelmingly, America is Christian. And the holiday is a federal holiday honoring the philosopher Jesus. So, you don't wanna hear about it? Impossible. And that is an affront to the majority. You know, the majority can be insulted, too. And that's what this anti-Christmas thing is all about."

At one point, O'Reilly told the caller, "Come on, if you are really offended, you gotta go to Israel then." (Media Matters for America, a liberal media monitoring organization, quickly posted transcripts from the radio show.) "It was offensive and over the top," says Steven Freeman, associate director of the civil liberties division at the Anti-Defamation League, a leading Jewish civil rights organization.

Rep. Nita Lowey, D-N.Y., is circulating a letter among colleagues on the Hill that urges O'Reilly to apologize for his remarks. "By suggesting that Jews do not have a place in American society unless they accept without comment its 'predominantly Christian' nature, you are brushing aside the basic freedoms guaranteed to all by our Constitution," she writes. Lowey tells Salon, "Bill O'Reilly's comments were the tip of the iceberg from some conservative news outlets that are suggesting minorities should keep quiet or leave the country. It's really dangerous and I'd hope wiser heads would understand this and cease and desist."

"O'Reilly crossed the line to overt anti-Semitism," adds Michael Lerner, head of the progressive Jewish organization Tikkun. "He's trying to tell his audience that Jews have no legitimate role in public life except as second-class citizens."

O'Reilly is not alone in singling out Jews this Christmas season. In a column for the conservative Web site FrontPage, former Boston Herald writer Don Feder mocked the notion that "Myron may fear the onset of another Crusade if he hears the strains of 'O Little Town of Bethlehem' drifting through the hallways." He added, "The brave men who fought and died for America in every war from the Revolution to Iraq, overwhelmingly were Christians. Count the number of crosses in Arlington National Cemetery (on federal property, no less). Add the Stars of David."

O'Reilly, who in a pique of anger on Dec. 9 called Media Matters' transcribers "the worst non-criminal element in the country," seems to wear the accusations of anti-Semitism as a badge of honor -- proof that he's upsetting the media elite and standing up for traditional American values. "If you think that's anti-Semitic, I wanna know. Do you think that's anti-Semitic?" O'Reilly asked listeners after replaying a tape of his Dec. 3 caller.

Early this year, O'Reilly's blanket defense of Mel Gibson's "The Passion of the Christ" against charges that its portrayal of Jews was anti-Semitic initially raised some suspicions among some Jews. When O'Reilly asked one guest on his Fox News show if the "Passion" controversy was being driven by the fact that "the major media in Hollywood and a lot of the secular press is controlled by Jewish people," many considered their suspicions confirmed.

O'Reilly has insisted he's a friend to Jews. During a March 10 appearance on the Don Imus radio show, responding to New York Times columnist Frank Rich, who ridiculed O'Reilly's question about Jews controlling the secular press, O'Reilly said, "I did a benefit in L.A. four weeks ago where we raised millions of dollars for Israel. OK, pal? Get off it." Following O'Reilly's lead, Business Week reported that the host had "chaired a benefit for Israel that raised $40 million."

But as noted by the Forward, the New York Jewish weekly, O'Reilly was simply the paid speaker for the fundraising event, not a volunteer chair who helped raise money. (His going rate is $60,000 per speech.) The event, sponsored by the Jewish Federation of Greater Los Angeles, raised $3 million, not $40 million, and most of that $3 million was spent on local causes, not given to support Israel.

Aside from baiting Jews, who continued to vote overwhelmingly Democratic in November, despite elaborate efforts by Republicans to sway their votes this year, the larger target in the Christmas crusade is the progressive movement and the Democratic Party. "There's no question that some sections of the political right think it's time to finish off liberal and progressive forces forever," says Lerner. "And they're not restrained by any sense of fairness. They're sore winners. They won and now they want to beat up on the people they've already defeated. "

Who are the defeated? O'Reilly laid out his conspiracy theory for Fox News guest Newt Gingrich on Dec. 10: "It's like the MoveOn people [saying], 'We're never going to get gay marriage, euthanasia, partial birth if we have a Christian nation. We've got to get rid of that Christian nation designation like Canada has, and then we can get our agenda through.' And what's the biggest display of Christian? It's Christmas."

"These guys are nuts, simply nuts," answers Ira Foreman, executive director of the National Jewish Democratic Council. "Either they're woefully ignorant or it's the worst kind of demagoguery. If Jews or progressives or Democrats are supposed to be behind this plot to ruin Christmas, somehow they left me out."

Nonetheless, the crusaders seem to have no shortage of dire anecdotes about the absurd lengths that secularists will go to destroy Christmas in America.

For instance, conservative pundits blame Target for no longer allowing the Salvation Army to collect money outside its stores. But the retail chain made the move simply because it was getting requests to solicit donations in front of stores from so many nonprofit groups -- presumably several faith-based ones -- that executives didn't feel that it was right to make a lone exception for the Salvation Army.

Right-wingers chastise organizers of Denver's downtown holiday Parade of Lights for rejecting the nearby Faith Bible Church's religious float. But organizers of the event, fearful of being put in the position of having to choose one faith's float over another for its small parade, have never allowed religious floats of any kind in the procession. So how does that fit into a specifically anti-Christian "jihad" gripping America? (P.S. The Faith Bible Church was notified more than six months ago that its float would not be in the parade, so the incident hardly qualifies as news.)

And take the example of a school principal in Kirkland, Wash., who allegedly canceled a performance of Charles Dickens' "A Christmas Carol" out of fear that it violated the district's holiday policy of keeping church and state separate. The story has become a touchstone in the anti-Christmas crusade movement. O'Reilly cited the play's being "banned" as a prime example of "anti-Christmas madness," while conservative Washington Times columnist Deborah Simmons wrote matter-of-factly that the principal "lowered the curtain on a production of the classic 'A Christmas Carol' because feeble Tiny Tim says, 'God bless us everyone.'" That assertion is pure fiction.

Reading the very first news account of the manufactured controversy, from a Dec. 5 article in the King County Journal, it's plain the school's principal, Mark Robertson, "canceled the Dec. 17 matinee by the Attic Theatre cast because students would have been charged to see the performance." Robertson himself told the paper: "We don't allow any private organizations to come and sell products in the schools, or we'd have everybody down here." The principal mentioned in passing that even if the play were free it would have prompted "a secondary discussion about public school and religion," such as whether the play was tied to any particular curriculum and whether attendance was mandatory.

Yet on Dec. 8, Seattle Times columnist Danny Westneat, reaching a much wider audience than the King County Journal, wrote that Kirkland "students were to see a staging of Dickens' story on Dec. 17, but the principal has canceled it, in part because it raised the issue of religion in the public schools."

Two days later, Westneat conceded he "went too far" in his original column, admitting the play was canceled because it was improperly booked. "The principal's comments about the play raising issues of religion in school were misunderstood," he wrote. By then, however, the tale of the canceled Christmas play had ricocheted around the talk radio echo chamber and become permanently lodged inside Fox News.

In an interesting footnote, Westneat wrote, "Few things I've written have generated as loud and disparate a response as Wednesday's column. I'm surprised at how many rallied to the secular cause. Nearly half of more than 200 readers who weighed in said schools should avoid the [Christmas] issue." Which hardly supports O'Reilly's claim that fed-up Americans are rising up against anti-Christmas forces.

That said, Lerner suggests liberals would be making a serious mistake if they failed to acknowledge the real sense that the spiritual side of Christmas is being undermined in American culture. He says Jews, progressives and secularists aren't the real Grinches, but rather the material-obsessed marketplace. "It's turning the symbolic values of Christmas into an excuse to convince people to buy and buy and buy," he says. "Christians are right to feel spiritual values are under assault; they are responding to a very real problem. But secularists are not to blame."