The Return of the Rings

A new DVD saves Middle Earth fans going through serious withdrawal this winter, the first in three years without a "Lord of the Rings" movie. 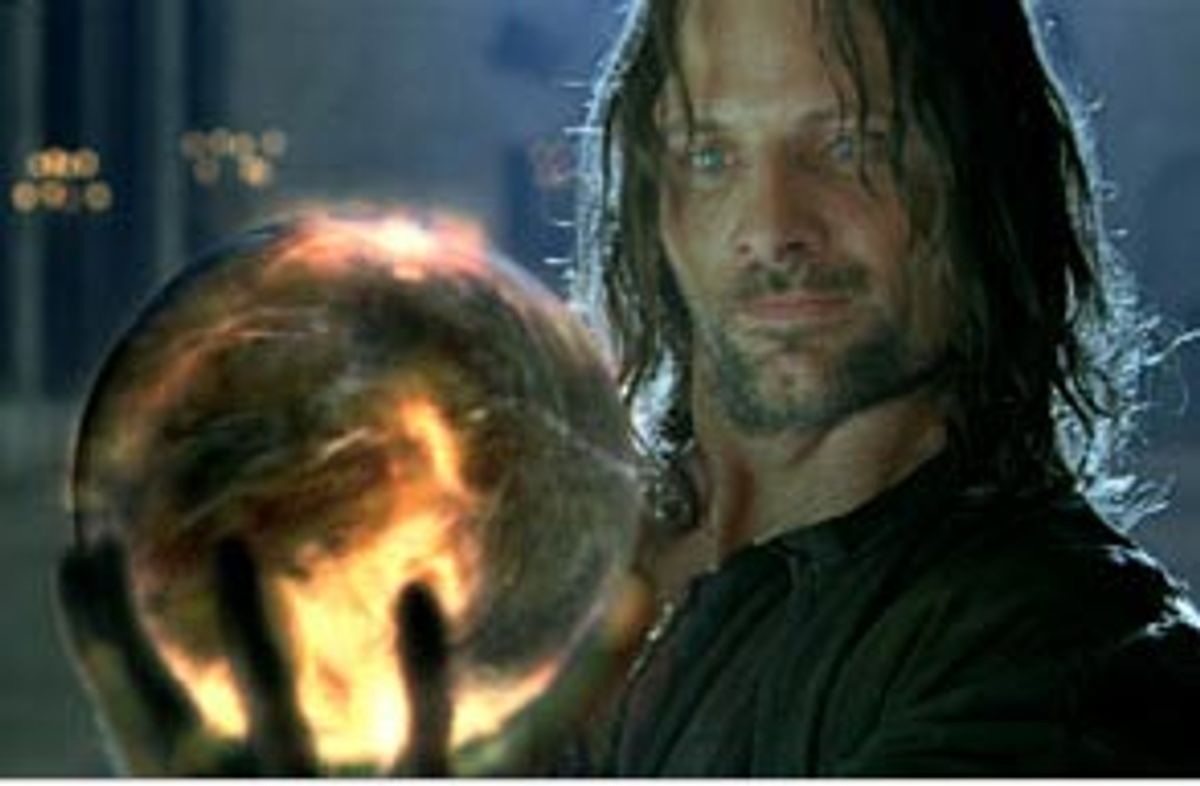 All but the most ardent Middle Earth lovers among us were feeling a bit burnt out by the time "The Return of the King" swept the Oscars earlier this year. One of the chief symptoms of Tolkien mania is the feeling that you just can't get enough of the stuff, but in reality that's rarely the case. The parade of awards felt predictable, every aspect of the professor's creation seemed thoroughly explored and it was time for a rest.

But then, how empty November felt this time around, the first year in three without a "Lord of the Rings" installment to look forward to. It's time, as people are so wont to say in the movies. So here comes the extended DVD edition of "The Return of the King," with 50 minutes of footage not included in the theatrical release. Combine it with the extended editions of the two previous films, and you have just over 11 hours of Peter Jackson's epic masterpiece. If there's a better antidote to holiday tensions than a marathon session with all three DVDs and your parents' new widescreen TV, it's probably illegal.

The added footage in "The Return of the King" restores some favorite scenes from the book, particularly Gandalf's confrontation with the Witch King of Angmar (aka, the Lord of the Nazgul), Eowyn and Faramir's blossoming romance while both are recovering from the siege of Minas Tirith, Aragorn using a palantir (seeing stone) to challenge Sauron to the final battle at the Black Gate of Mordor, and a parlay with the person called the Mouth of Sauron just before that battle.

All are welcome and well executed. But viewers who listen to the commentary track with Jackson and his co-screenwriters, Fran Walsh and Philippa Boyens, also learn why they wound up getting cut anyway. Mostly, it was to trim the run time of the theatrical release, but also, the trio argues, because some scenes that work well in prose -- particularly the Witch King's taunting of Gandalf -- fall flat as cinema.

The Witch King's menace gets undercut, they insist, when he simply flies away (to deal with the newly arrived horsemen of Rohan) after shattering Gandalf's staff. Perhaps I'm too influenced by the novel (in which the Witch King is an unforgettable nightmare figure), but in this case, I think they're wrong.

Some of the added footage fills out the back story, the history of Gondor and so on. Other bits offer far less, and actually undermine the film. The great ingenuity of Tolkien's book is the way it combines the heroic diction of ancient sagas with a more homely, modern style of storytelling. The mixture has to be gotten just right. Too much of the high-flown stuff could sound over-the-top and ridiculous, and too much comedy undermines the grandeur.

Take, for example, a newly added drinking game between Gimli and Legolas at the great hall of Edoras. On the one hand, it furthers the unfortunate strategy of using the dwarf for comic relief. Purists hate this aspect of the films, though a small amount of it -- less than we get even in the theatrical release of "The Two Towers," say -- does seem welcome. But Gimli and Legolas are two of the trickiest characters because their good-natured bickering threatens to turn them into caricatures who can't, then, command serious consideration in the great battle sequences. The drinking game scene is a step too far in that direction. (By contrast, since Dominic Monaghan's Merry and Billy Boyd's Pippin are basically comic characters rather than warriors, their courage in a pinch always comes across as an unexpected outpouring of gallantry, and is all the more stirring for that.)

In fact, the same delicate balance between romantic solemnity and a bumptious, irreverent vigor prevails among the film's screenwriters. To judge by their commentary, Walsh and Boyens were the keepers of the flame when it comes to the first element, while Jackson spoke up for the latter. (Walsh, Jackson's wife, also directed some of the film's most intimate scenes, including some tender moments between Frodo and Sam during their journey through Gondor.) The two women seem to know Tolkien's mythos backward and forward (including the dauntingly complicated sagas recorded in "The Silmarillion"); Jackson could always be relied upon to insert a joke or a severed head on a spike when the going got too serious. It's a shame theatrical audiences missed a bit of pure Jacksoniana, the film's depiction of the Mouth of Sauron, a character whose entire face is covered by an iron mask except for an enormous, hideous mouth.

Possibly the only special effect in any of the three films that doesn't really work is the army of the dead that Aragorn musters to defeat the army of Mordor at Pelennor Fields. The translucent ghosts have a rakish, jovial quality that recalls the unscary specters in Disneyland's Haunted Mansion ride, and they never inspire in the audience the kind of dread that the characters who meet them are said to suffer. So it's a relief to learn from the commentary that Jackson & Co. aren't entirely happy with them either. (Though the extended edition does include a grisly bit with Aragorn, Legolas and Gimli fleeing the Paths of the Dead through an avalanche of skulls, and this helps a bit.)

One variation from the novel that Jackson, Walsh and Boyens contemplated, partially shot and eventually abandoned, is particularly intriguing. Feeling that they needed a climactic battle between Aragorn and Sauron, they originally planned for the two to fight hand-to-hand at the Black Gate. It sounds dubious, until you learn that they had the swarms of Sauron's orc armies parting on the battlefield to reveal the Dark Lord stepping forth in one of his past incarnations: Annatar, a very tall, very beautiful man. It's such a good idea, I almost wish they'd gone through with it. Some footage and the concept art for those scenes are included in the appendixes disks.

The appendixes also feature several hours more of documentaries, and if you think you've had about enough of these already after consuming similar offerings on the two previous DVDs, guess again. One of the best among them concerns a little-celebrated aspect of the films that is, in fact, a key to their authenticity: horses and horsemanship. Computer-generated monsters, however masterfully executed, nudge any film toward the unreal; a thousand living, breathing, magnificent animals like those who perform in "The Lord of the Rings" pull it back to earth again. The mixture of real horses and CGI effects in the film's stupendous battle scenes are exactly what keeps them from coming across as high-end video games.

The documentary "Horsemen of Rohan" introduces some of the animals and their stunt riders, and offers a moment designed to induce swoons in teenage girls: a besotted Orlando Bloom in full Legolas regalia planting a series of smooches on the velvety gray nose of his steed. But wait, it gets even better: The stunt rider who portrayed Arwen in the dazzling chase scene in "The Fellowship of the Ring" tells how Viggo Mortensen, after learning that she'd fallen for the white stallion she rode on, bought the horse for her. (He also bought, for himself, the horse who plays Aragorn's faithful Brago.) Ian McKellen further informs us that one of the two stallions who played the legendary Shadowfax was "a diva."

As for the film itself, it sustains all of its power with the additional 50 minutes. The performers and filmmakers are virtually fused with the material, so that their improvisations often feel more true to the novel's spirit than certain aspects of the book itself. It was Bernard Hill's idea, for example, to have his character, Theoden, lead off the movie's most spectacular scene, the charge of the Rohirrim onto Pelennor Fields, by riding across the front lines of his soldiers, holding up his sword to rattle against their spears.

The film's most beautiful moment, Faramir's suicidal ride against the occupied city of Osgiliath as Pippin sings mournfully to Faramir's mad father, Denethor, feels like the raw, wild, ancient emanation of the Anglo-Saxon and Norse sagas that inspired Tolkien. The idea came to Boyens when she heard Billy Boyd's lovely singing voice at a karaoke bar. Virtually overnight, she wrote the words for Pippin's song and Boyd himself wrote the music.

By giving more weight to the disastrous relationship between Faramir and Denethor, the extended version of "The Return of the King" brings a symmetry to all three films. Each continues the main threads, but each also contains the struggle of an individual person -- Boromir in "Fellowship," Theoden in "The Two Towers" and Faramir (or, alternately, Eowyn) in "Return" -- to answer the challenge of his day. Only Theoden succeeds at this; both Sean Bean as Boromir and John Noble, who plays Denethor, introduce a tragic vein into what would otherwise be the relatively smooth ascension of Aragorn to his destiny. It's the supporting actors here who bring to the films the full measure of humanity, the failure that keeps Aragorn's triumph from being too easy.

Not that Viggo Mortensen or any of the other principles needs much help. Mortensen makes Aragorn's nobility seem natural; his performance is an example of how the film improves on the book. To this reader, the novel's Aragorn was too stilted and idealized to be interesting. That Mortensen manages to warm and animate him is a minor miracle. Then there are the hobbits: "You made us cry," read the fax that Jackson, Walsh and Boyens sent to Sean Astin (Sam) and Elijah Wood (Frodo) after they saw the dailies of the scene where Sam shoulders the half-conscious Frodo and carries him to the lip of Mt. Doom. Indeed. The filmmakers milk these moments shamelessly, but they've earned every drop.

Watching the extended editions of all three films together still takes less time than reading Tolkien's novel, but the effect is similarly immersive. You swim in this story, and drink it and breathe it. By the time Sam rallies that last bit of willpower, if you're still with it, your defenses are entirely gone. You'll cry, too -- you just try not to. To envelop yourself in Peter Jackson's "The Lord of the Rings" is to surrender all cynicism and irony, all reservations about underlying symbolism and troubling imagery, and to be carried along on an irresistible current, at least until Frodo sails off to the Undying Lands. For Jackson and his collaborators it took several years and an epic creative journey to deliver us into this pristine state, but as Bilbo Baggins himself would surely observe, it was well worth the trip.