Martin Scorsese looks at the life of Howard Hughes through rose-colored -- and vibrant, stylish, Technicolor -- glasses. 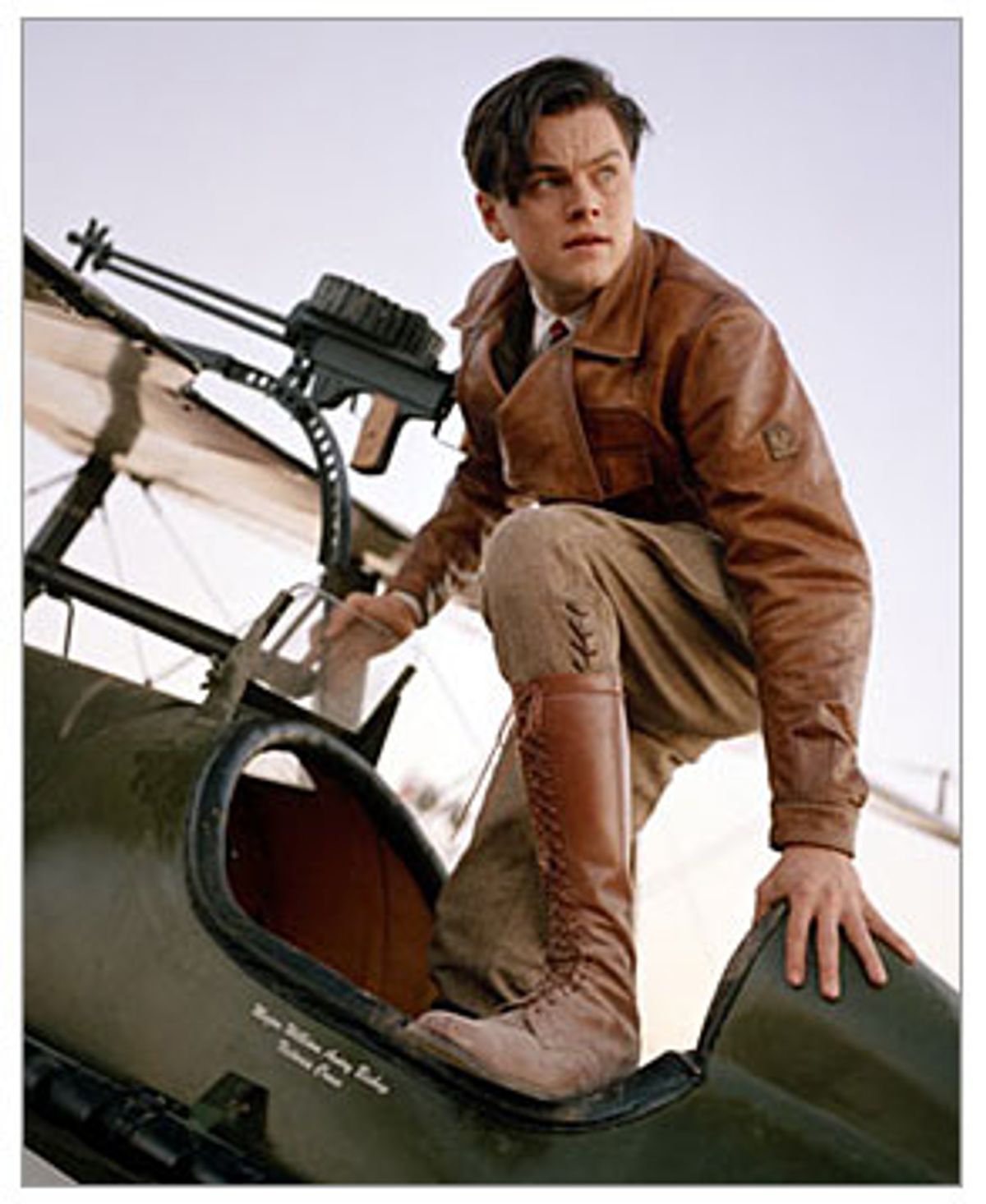 To anyone who first became aware of Howard Hughes in the 1970s -- who saw artists' renderings of him as a forlorn-looking mountain man with tired eyes and spiraling fingernails tough as ponies' hooves -- it seemed incomprehensible that he had ever made movies, flown planes and dated movie stars. But it was even harder to believe that he'd ever been young. To look at those sketches from the '70s, by which time Hughes was a paranoid crackpot recluse (a very rich paranoid crackpot recluse), was to see a nightmare straight out of a David Lynch movie, before there were David Lynch movies. When Hughes died in 1976, at age 70, he seemed like a cautionary figure to America's youth -- proof that rampant capitalism could make you crazy, or something like that. But it's possible that to people of his own generation Hughes stood for something else: maybe something as simple as glamour gone to seed -- or, simpler yet and far sadder, glamour grown old and crazy. You could envy Hughes his wealth. But no one who ever saw those pictures would want his face, or his soul.

Within that time, Hughes had his first nervous breakdown (there would be others) and exhibited plenty of compulsive behavior -- for example, saving his urine in empty milk bottles, which he'd line up like a row of golden chorus girls. But while Scorsese gives us an inkling of Hughes' future madness, he turns his gaze away, politely, well before it takes a firm hold. Neither Scorsese nor screenwriter John Logan is particularly interested in picking at Hughes' bones: Dead bones make for an ugly movie. Instead, they translate Hughes' youthful vigor, his eccentricities and compulsions, and his status as a visionary, larger-than-life loner into discrete movie terms, a vivid language of obsessive close-ups and exhilarating flying sequences. Leonardo DiCaprio, actor and movie star, is in charge of making the moviefied Hughes feel human, and he succeeds. This is your standard biopic reinvented as a movie dream, a life broken up into bits of light (maybe the only way to render a life manageable) and sent streaming through a projector -- a digitized life with a celluloid heart.

Even though "The Aviator" is based on real-life people and events, very little about it seems real or realistic, and that's clearly by Scorsese's design: Among other things, "The Aviator" is a love letter to a time in Hollywood when matte painting and miniatures gave us a reality so heightened that we could scarcely believe our eyes. And yet believing them, even against our better judgment, is precisely the point of going to the movies, a point "The Aviator" milks deliciously. In a brief flashback, we see Hughes as a child, being bathed by his mother with some sort of heavy-duty black soap. She's worried he'll catch some deadly disease, and she's trying to protect him by keeping him scrupulously clean. The scene is shot in such warmly glowing light that it makes you feel nostalgic even for someone else's very weird childhood -- you don't have to be a hardcore Freudian to understand why Hughes, in later years, compulsively washed his hands with that same black soap, which he carried around with him in a little tin.

Hughes' problems and eccentricities are part of his myth, and while the movie strokes them a bit fetishistically, it also makes Hughes seem normal enough that we sympathize with him rather than shrink from him. So even though we watch in disbelief as Hughes frets over costly details while making the World War I dogfighter drama "Hell's Angels" (he shot 2.5 million feet of film, at a cost of $3.8 million, and three pilots died during filming), we can't help marveling at the way he captures the planes flying in perfect formation, the way they dip and dive toward the camera. How could a crazy person make something so beautiful? Then the argument inverts itself: How could you make something so beautiful and not be crazy?

Hughes was a movie producer and director, a wildly successful industrialist, a remote and confused boyfriend to the likes of Kate Hepburn (Cate Blanchett, in a cheerfully stylized performance) and Ava Gardner (Kate Beckinsale, who's possibly less believable than Blanchett is, but nearly as enjoyable to watch). But the movie wouldn't be called "The Aviator" if Hughes didn't love airplanes, and flying, most of all. The picture makes several gentle, winking nudges at Hughes' fixation on breasts (he made a whole movie, "The Outlaw," around Jane Russell's knockers, which piqued Hollywood censors), but his feelings about planes and flying have an erotic charge, too. In one sequence, he examines the body of a new airplane, skimming his hand along its shiny surface, feeling his way along the rivets, like hundreds of miniature erect nipples, that hold it together.

During this part of his life, Hughes owned most of an airline (TWA), was busy guiding his company, Hughes Aircraft, in building ambitious experimental airplanes and, once in a while, made a movie or two. But "The Aviator" suggests that his truest form of escape was flying. In an early scene, just as he's beginning to woo Hepburn, he brings her up in his plane for a nighttime swoop around Hollywood. City lights glitter and wink below them (the music, perfect for the moment, is that night light of a ballad, "Moonglow"). Hughes, immensely attracted to and frightened by this self-assured, leggy creature in the cockpit next to him -- he's shown her how to work the controls, a symbolic ceding of sexual power if there ever was one -- takes a chance: Though he's neurotically germ-phobic, he offers her a swig from the bottle of milk he's just opened for himself and, after she hands it back, he pauses and takes a brave gulp himself. Hughes likes girls well enough, but he likes breaking aircraft speed records better. And even though he nearly dies in a fiery crash in 1946, while testing an experimental reconnaissance plane, it's not long before he's airborne again. The air is the only place Hughes feels truly free; it's the ground that terrifies him.

Scorsese is a teller of tall tales, and wide ones, too: His 2002 "Gangs of New York" was too wide, a fatty-fatty-2-by-4 of the imagination -- its scale was impressive, so impressive that it dwarfed the storyteller, and the story. "The Aviator" is a completely different type of movie, and it seems to have freed up something in Scorsese. It's stylish and fleet, and even though it's meticulously detailed, Scorsese's devotion to technique never weighs it down. The flying sequences were pulled off using a mix of low- and high-tech means -- miniatures are set against digital backgrounds, for example. Scorsese wanted the movie to have the lushness of the old two- and three-strip Technicolor processes, an effect achieved using digital filters. The result is a picture whose colors have a vivid softness. The movie's costumes, by the always astute Sandy Powell, look more like movie clothes than street clothes, which is precisely the point. Hughes' late '20s bespoke windowpane-plaid suits, the flowing trousers and softly sporty blouses worn by Hepburn, the candy-rainbow Vargas Girl platform shoes seen on Hughes' underage "discovery" Faith Domergue (Kelli Garner): These are clothes that speak movie language unapologetically -- they stand up to the camera with their bold colors and shapes, but not so much that they distract us from the characters who wear them.

I always think of Scorsese as the kind of director who assembles a neighborhood of sharp, attuned collaborators for each picture, like a mini version of a happy, cooperative Little Italy block. (On "The Aviator," that neighborhood of familiar, trusted names includes cinematographer Robert Richardson; production designer Dante Ferretti and costumer Powell; and Scorsese's longtime editor, Thelma Schoonmaker.) Scorsese's vision may shape the picture, but his ego never hogs the full frame, and it never dwarfs the actors.

I would have thought DiCaprio too wispy to play Howard Hughes, but the performance works. He's more beautiful than Hughes ever was: In some scenes his eyes look inhumanly blue -- it's the blue of a Siamese cat's eyes, or maybe those of a scheming, preening Persian. But the smooth, cool surface DiCaprio shows us has a suitable number of cracks in it. Hughes suffers through the premiere of "Hell's Angels" -- he doesn't like crowds, and as almost any director would, he fears the audience will hate the picture. His anxiety channels itself to a relatively small piece of real estate: His brow furrows into a maze of wrinkles, like a complicated Celtic symbol. And in a much later scene, after Hughes has suffered a freakout and has locked himself in the screening room that's part of his offices, he tentatively allows Hepburn, who broke up with him long ago, to tempt him back to the real world. He needs it. Hepburn has come to thank him for a kindness he paid her (he bribed a newsman to hand over pictures of her and the married Spencer Tracy, to save her from scandal). He hasn't emerged for weeks (this is where those empty milk bottles come in handy), his hair is a scruffy, mangled mess, and his fingernails have passed the shovel stage.

He won't open the door for her, but he talks to her from the other side.

"Can you hear me?" she asks the partly deaf Hughes.

"I can always hear you, Katy," he says, "Even in the cockpit, with the engines running."

DiCaprio plays the scene with muted, confused tenderness. He brings a similar quality to a later scene where the peppery Ava Gardner shows up at his house where, once again, he has barricaded himself, and cleans him up so he'll be ready to go to Washington to testify before the Senate. In a reedy, playful voice, he asks Gardner if she'll marry him. "You're too crazy for me," she purrs, the understatement of the year, but one tinged with regret as well as frustration.

"The Aviator" glides a bit too smoothly over Hughes' paranoia and cruelty. (You wouldn't believe that this character and the one played so unnervingly by Robert Ryan, in Max Ophül's marvelously tense "Caught," were both based on the same man.) And Hughes' relationship with Hepburn is treated as the centerpiece of his romantic life, when in reality it may have been more casual. But you end up believing in the movie's vision anyway, if only because Hughes needs to have at least one person who truly understands him. He surrounds himself with supporters, like bespectacled meteorologist professor Fitz (Ian Holm), and longtime advisor and associate Noah Dietrich (John C. Reilly). But it's Hepburn who best understands that while celebrity and wealth alone would be enough to set herself and Hughes apart from mere mortals, their shared and individual oddness ensures that they'll never really fit in anywhere. She imparts a tender warning: "We're not like everyone else -- too many acute angles, eccentricities."

You could say that Hughes was eventually done in by those acute angles, that they choked off his sanity and barricaded him from the truly living. That's the part of Hughes' story Scorsese only alludes to -- it's a murky shadow around the corner of the movie's ridiculously rousing, and satisfying, Hollywood ending. If nothing else, "The Aviator" is proof of the restorative powers of Hollywood, of its ability to work miracles on certain lost causes. Hollywood can't raise a man from the dead, but it can, for the space of an hour or two, give him back his youth. For certain lost souls, that temporary flash of life may be happier than the one that was actually lived.