Kevin Spacey's fetishistic Bobby Darin biopic is so over the top, he might have called it "Beyond the Pale." 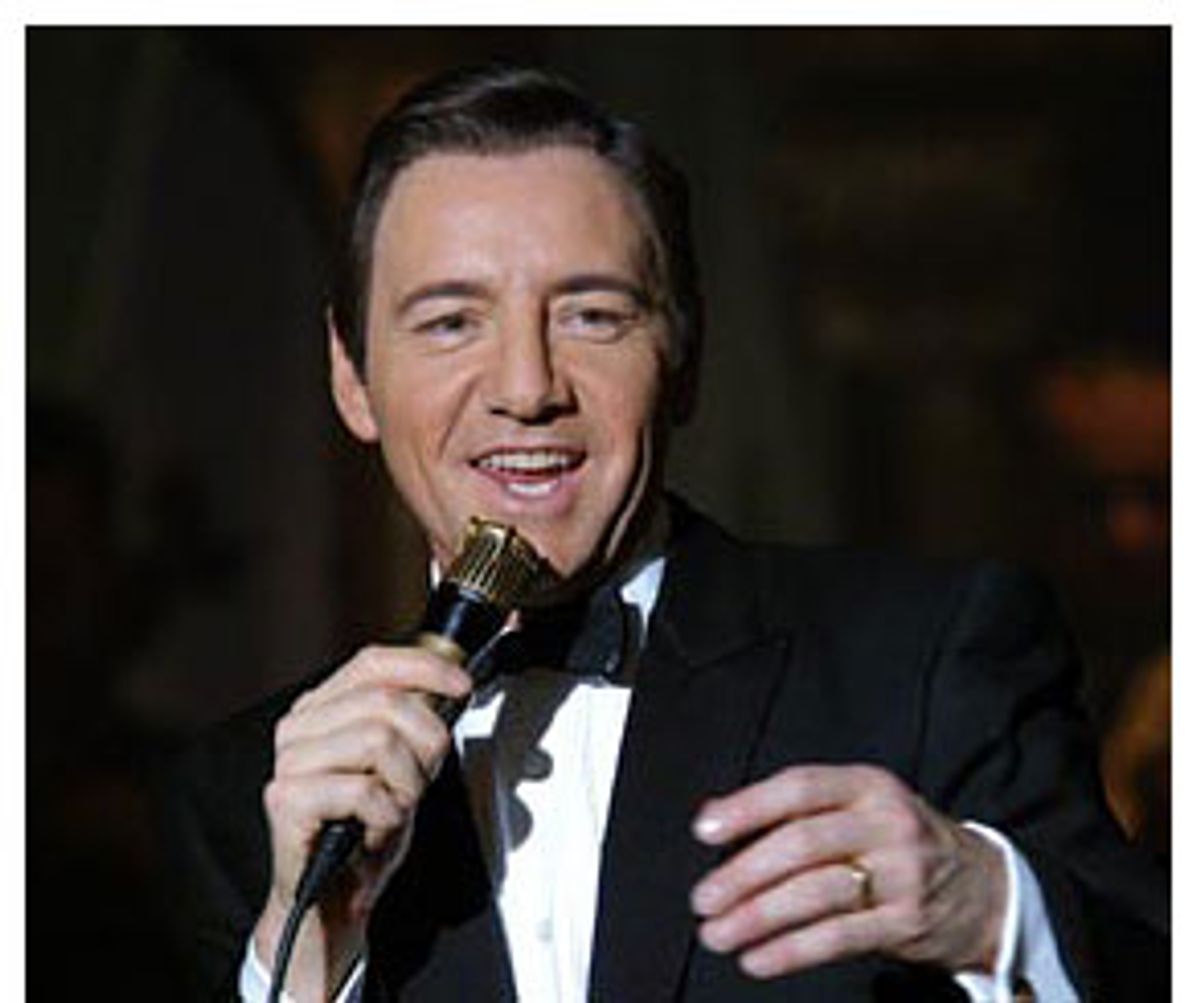 The life story of Bobby Darin, as Kevin Spacey tells it in his fetishistic biopic "Beyond the Sea," which he wrote, directed and drove into the ground (he also happens to star in it), has a curious trajectory. Darin was born in the Bronx in 1936, a sickly child with a show-tune belter of a mother (Brenda Blethyn) who sure could play the pianner. He rises to fame and stardom in the first 20 minutes of the movie; the remainder is spent on his limbo years in the late '60s and early '70s (he died in 1973 at age 37), when he languished as a bald, sincere, politically aware folk singer who no longer knew how to connect with audiences.

You may wonder why the most interesting and glamorous portion of Darin's life merits so little attention: That's because Spacey has big plans for this little biopic. It's not just a straightforward recounting of Darin's life, with lots of singing and dancing (though there is that). This little movie does everything: It's a dreamy tribute, a psychological study, a spiritual exhuming, maybe even a dessert topping.

Spacey, modestly, attempts to probe the deeper meanings of Bobby Darin and the universe. There are mother-son issues to be worked out, toupees to be flung into the garbage can and inner children to be danced with (more on this later). Darin, Spacey assures us, was a complicated guy. But not nearly so complicated as Kevin Spacey.

What on earth could Spacey be thinking? "Beyond the Sea" is the vanity project he has been hoping to make for years, and in principle at least, it wasn't necessarily a bad idea. Spacey can sing, and he's a brilliant mimic; he can't dance all that well, but he sure does try. And while naysayers always on the lookout for an easy nay claimed he was just too old to play Darin in his salad days, that's not really the problem, either.

You can't become a character if you want to be that character: Desperation isn't the same thing as acting. Spacey's mimicry is so precise, it's exhausting. He does a fine job wheeling his way through great pop standards like "Mack the Knife" and "Beyond the Sea." But ultimately, it's like staring at a copy of a van Gogh for hours, marveling at the precision of the brushstrokes. Characters waltz about, uttering lines such as "Memories are like moonbeams: We do with them as we want." Can we train them to, say, use the vacuum cleaner? Now that would be a movie.

"Beyond the Sea" is riddled with fantasy sequences, like the one in which Darin-Spacey woos the young Sandra Dee (played, with Tammy-doll blankness, by Kate Bosworth) to the tune of -- what else? -- "Beyond the Sea." Wherever she turns, there's Spacey, dressed as a waiter, a bus conductor, a toreador (or something like that). Here and there, Spacey the director allows overt, snarky jabs at the dubious heteromanliness of Rock Hudson and Troy Donohue. (Let's just let that pass without comment.) And now and then, the grown-up Darin-Spacey has a heart-to-heart with the child Darin-Spacey: The boy comforts the man, and the movie ends (spoiler alert!) with the two of them tip-tapping their way through a big song-and-dance extravaganza.

Did I dream that? Or was it, perhaps, an undigested bit of beef, a blot of mustard, a crumb of cheese, a fragment of an underdone potato? "Beyond the Sea" takes the biopic into a new realm of cosmic indigestion. Don't look now, but I think a moonbeam just rode by on a vacuum cleaner.