Want to know why Bush won? Watch James L. Brooks' smug message drama, which tries to skewer clueless liberal do-gooders but only succeeds in impaling itself. 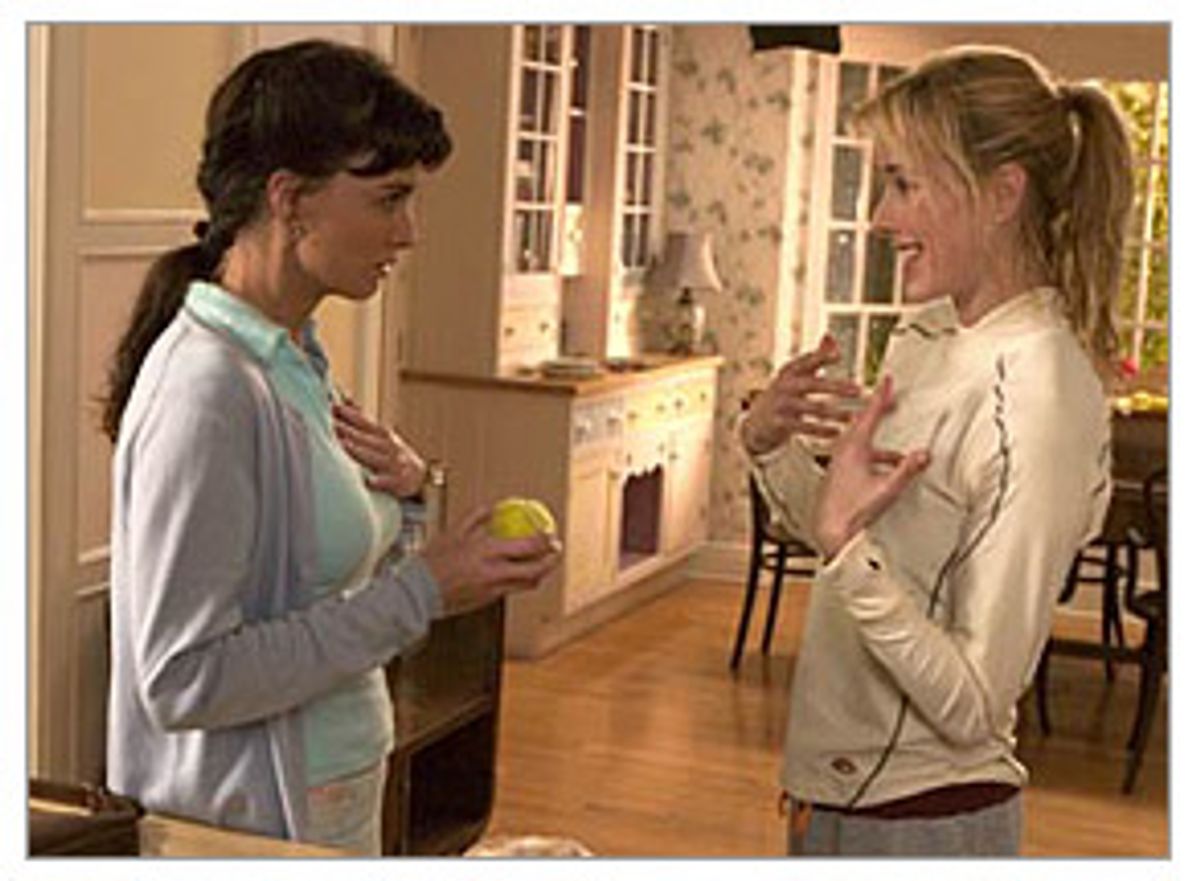 In Douglas Sirk's 1959 "Imitation of Life" a homeless, widowed black woman and her small daughter are taken in by a widowed white woman with a little girl of the same age. Years pass. The white woman, Lora (Lana Turner), has become a successful actress. The black woman, Annie (Juanita Moore), works as her maid. She would have been destitute without Lora's beneficence and yet the movie shows us the divide that charity can't cross. In one scene, Annie envisions the friends who'll come to the funeral she has saved for and Lora says, "It never occurred to me you had many friends." In the least reproving tone imaginable, this woman, who has worked for and lived with her white employer for years, says, "Why, Miss Lora, you never asked."

That invisibility isn't lost on Annie's daughter, the now grown Sarah Jane (Susan Kohner). Sarah Jane is light-skinned enough to pass for white, and that's just what she does. She tells her mother that she doesn't want the only boys she meets to be "busboys, cooks, chauffeurs." Implicitly, she's telling Annie that she wants something better than to be a maid like her. All Sarah Jane finds is a job dancing at a sleazy nightclub -- but at least, she reasons, it's her choice, not a destiny she never asked for.

"Imitation of Life" is often snickered at as one of those soapy, sappy '50s movies we're supposed to have grown beyond. But Sirk's film is the toughest, most irresolvable movie ever made about race in this country. It depicts an America where denying your racial identity is a dodge and acknowledging it is a trap. It's a portrait of the differences that cannot be bridged by liberal good intentions.

As a measure of how much our movies have regressed, this holiday season brings us James L. Brooks' "Spanglish." Toward the end of the picture, the heroine, Flor (Paz Vega), a Mexican maid who works for a wealthy white Los Angeles family, takes her gifted daughter, Cristina (Shelbie Bruce), out of the exclusive private school to which Flor's employers have helped the girl win a scholarship. The reason, she tells her daughter, is that Cristina has to decide whether she wants to be a different person from the one her mother is.

In other words, the character set up as the film's moral compass tells her daughter that affluence and success are the province of corrupt white people with no sense of family or hard work or decency -- and accepting favors from them is the first step on the road to becoming as bad as they are. From a dubious heroine who tries to lie her way out of the trap of race to an unabashed heroine who teaches her daughter to accept the economic trap she exists in as a matter of cultural pride in just 35 years -- that's progress.

Doesn't Brooks realize that there are plenty of working-class people -- Latino, black, white, Asian, Arabic -- who'd risk their kids becoming people different from themselves if it meant that those kids would get to live a more secure, less backbreaking life than they have? The heartbreak of raising kids (or being someone's child) is that the success you wish for them often, if they achieve it, takes them beyond you. That's one of the sacrifices good parents make. It doesn't follow, however, that children who are more successful than their parents inevitably become bad people and leave the values they've been raised with behind.

None of this seems to have occurred to Brooks. "Spanglish" pretends to take aim at liberal good intentions, but the movie is just as blinkered as what it's supposed to be exposing. The smugness of "Spanglish," the highhandedness passing as concern for characters whose aspirations the movie cannot even imagine, is a great example of why so many people who'd most benefit from liberal social policies hate liberals. Or, as a colleague of mine fumed on our way out of the movie, "This is why the Democrats lost the election."

The villain of the piece is Téa Leoni's Deborah, the woman who hires Flor, even though Flor speaks only Spanish. You can see Deborah priding herself on what a noble act that is. It's typical of the character's self-absorption, which has become even worse since she lost her job and is spending all her time at home. She has no attention or energy left for her husband, John (Adam Sandler), a famous chef. And she has only disapproval for her daughter, Bernice (Sarah Steele, a marvelous young actor who is the only believable human presence in the movie), a great kid with a terrific personality and a killer smile whose plump frame doesn't fit her mother's ideal of slimness. When the family decamps to Malibu for the summer, and Flor and Cristina go along, Deborah takes Cristina under her wing, lavishing presents and attention on her and winning the girl's adulation in return. Cristina is the daughter Deborah wishes she had, and the attention she pays Cristina confirms her view of her own generosity and good-heartedness.

But "Spanglish" seems to have been made by and for the Deborahs of the world. What's offensive about the movie isn't that a white director has made a film about Latino characters. That argument (only women can create women characters, only black people can create black characters, etc.) is a phony one, ignoring that art is created and experienced by the exercise of sympathetic imagination. "Spanglish" is offensive because it turns liberal self-abasement into self-congratulation.

Brooks uses the Deborah character to show that he's aware of how people in his economic class condescend to minorities, how they believe that their money and goodwill can overcome any differences, solve any problem. But the movie is lost in its own fantasy world. When the screwball comedies of the '30s satirized the rich, they never pretended that the opulent lifestyle was familiar to the audience. But Brooks doesn't seem to have any notion that what he's showing us of Deborah and John's lifestyle -- the two cars, the maid, the private school, the parent who can just stay at home if she loses her job -- will be unfamiliar to anyone in the audience, at least to anyone who is white. In "Spanglish," all the affluent people we see are white, and being Latino means you belong to the little folk who haven't lost touch with their roots. Plucky spitfire Flor doesn't need the money from her white employers, or the advantages they give her daughter. She's ... the people!

As with all of Brooks' past films, "Terms of Endearment" and "As Good as It Gets" among them, "Spanglish" is sitcom deep while affecting a tone that's somewhere between observational comedy and a group therapy session. The characters crack wise and open up and reveal themselves through their heartaches and foibles. And the fact that they are struggling toward honesty is meant to make us admire them, even though the worst of them -- the Shirley MacLaine character in "Terms of Endearment," the Jack Nicholson character in "As Good as It Gets," Téa Leoni's Deborah here -- are monsters.

If Deborah were allowed the stylization given to screwball comedy characters, she might simply be presented as one of those rich dizzy dames incapable of seeing beyond her own nose, like Alice Brady in "My Man Godfrey," convinced she's helping the Depression poor by taking part in a scavenger hunt for charity. By pretending that he's getting inside the character while never trying to evince any empathy for her, Brooks pretty much guarantees we'll see Deborah as an evil bitch. I would love to know what occurred on the set of "Spanglish," because you can't watch Leoni's performance without imagining that she gave Brooks hell every step of the way.

There was a moment in "Flirting With Disaster" in which Leoni gave a surreptitious lick to her finger to slide off her wedding ring that suggested the great crazy spark some comics are lucky enough to have. Leoni's performance in "Spanglish" is a flabbergasting demonstration of comic technique that inarguably confirms that she is a wildly gifted comic actress. Leoni's Deborah enters in a state of breathlessness and never seems to regain full control. It's one long whirligig of a performance and yet, through no fault of Leoni's, it's not very funny: I could barely stand to watch her. The cruelty and self-absorbed cluelessness that might be breathtaking were they stylized are presented naturalistically -- and they are so horrendous it's no wonder we reject the character.

It's a measure of how bad Brooks' direction is here that given an actor of Leoni's talents, he can't abandon his own puny conception to find a way to make the performance work. But it's emblematic of "Spanglish," in which his control over the mawkish, pushy material isn't quite as hideously assured as it has been in his past films. The pacing is off, the emotional tone is wobbly, and none of the actors seem to be acting in the same style or the same movie.

As Leoni's alcoholic mother, a former torch singer, Cloris Leachman does the wise, wacky old codger routine so scene-chewingly that she's a cinch for an Oscar nomination. As long as Spanish actor Paz Vega is speaking Spanish, you can fool yourself that she's somewhat appealing. That ends when Flor learns English and Vega is stuck with Brooks' crappy dialogue. And it's hard to know what Brooks was thinking in his direction of Adam Sandler.

Sandler's character is a man who just wants his marriage to work, to the point of being self-effacing and ineffectual. But the combination of public milquetoastiness and the rage he unleashes in private makes the character seem more unbalanced and socially inept than the character Sandler played in "Punch-Drunk Love." The movie is supposed to show a growing attraction between Vega and Sandler, an emotional understanding that bypasses the language, class and race barriers, but there's no chemistry between them.

And that's a problem if we're supposed to believe that Flor leaves her job because, as she says, there are some risks you don't take when you have kids. She and John never seem to be in danger of doing more than a little midnight hand-holding. They both clearly know where to draw the line. Which makes her decision to quit her job all the more capricious -- how exactly is she going to provide for herself and her daughter?

The pain of parental sacrifice has long been the staple of weepers like "Imitation of Life" and "Stella Dallas." In "Spanglish," it's the child who has to sacrifice for the mother's pride. The movie gives Flor an out. The story is told to us in voice-over, as Cristina's Princeton application essay, so we're spared the possibility that Flor's decision cost her daughter anything. And lest we miss the message, Cristina even tells Princeton that she doesn't need the school's acceptance in order to accept herself. (There's a sure winner of an approach to take with the Ivy League.)

In any sensible terms, a mother who impedes her child's education as Flor does is a lousy mother. In the terms laid down by "Spanglish," she's a good Mexican, the kind who knows her place.