I dream of Vargas Girls 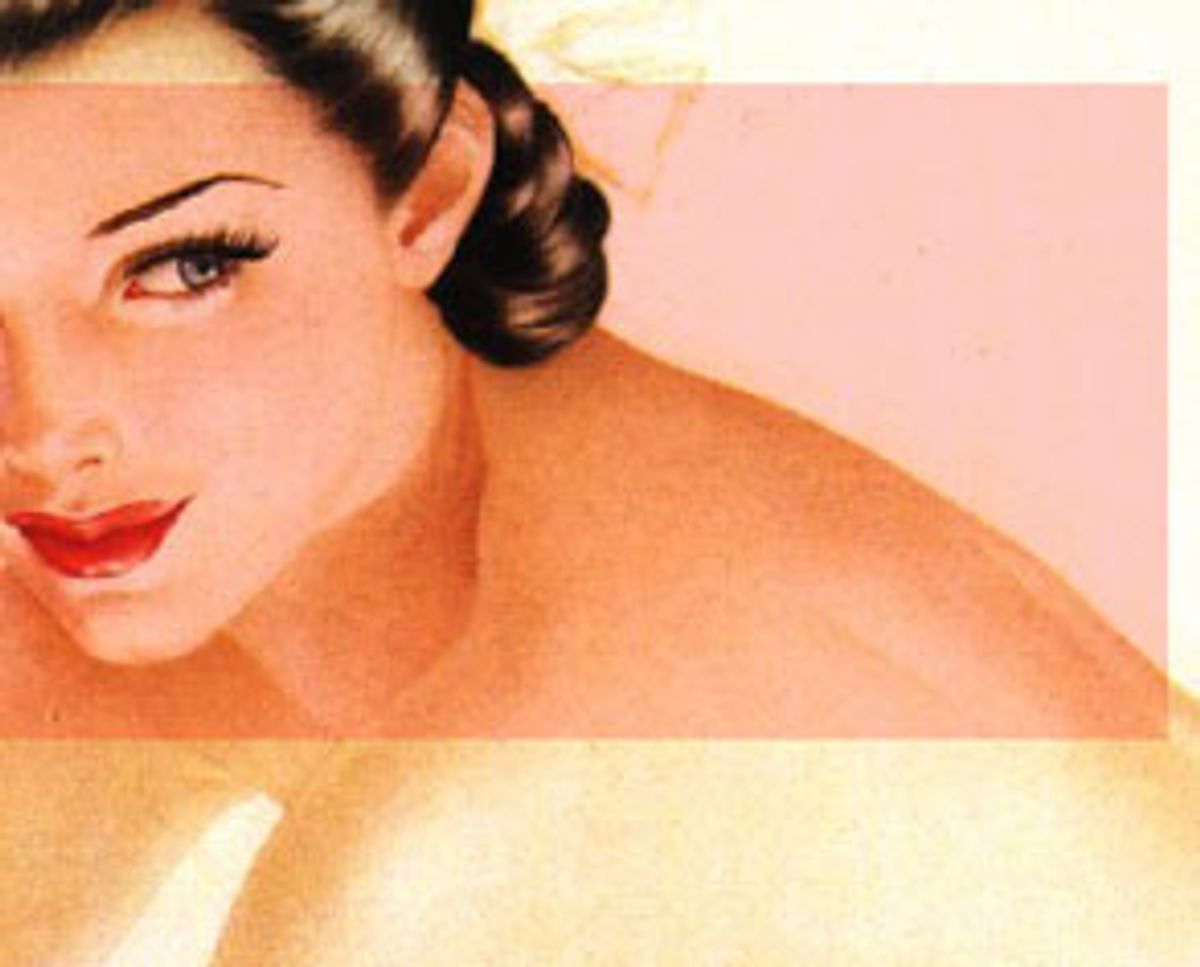 I knew something was wrong when I found myself, the other night, yawning through a program on VH1 called "All Access: Totally Naked," which consisted of little more than a parade of nude famous people -- mainly women -- cavorting through the televised ether. No, this was not the proper reaction from a 25-year-old man, someone who only a few years ago would've had to suppress the urge to write a letter to such a show's producers thanking them for their fine, thoughtful product. Something had to be done. And so, 18 seconds ago, I typed the words "Vargas pinups" into Google with the hopes of escaping these sexually saturated times and imagining what it was like to be a guy my age in the 1950s, when these innocent sirens were sexual contraband, bona fide smut sought out by men with burning cheeks and sinful minds.

And look at them, here they come! An assault of coy glances, glossy hair, seamed stockings, baroque garter belts. There are boas, bows, blush, lace, glitter, gauze, dimples, curves, curls. Pouty red lips, peachy grins, painted fingers, painted toes, teardrop breasts, buxom behinds, and tiny skirts being hijacked by sudden breezes. Really, though, it's all about those faces ... those smooth, indelible faces hovering in some land between melancholy and mischief, some continent where the expression "Please come here, you funny man" and "Don't even think about it" mean the same thing. There is a blonde in a white satin teddy, hand grazing her forehead, staring off at ... at what? Me? Another has slipped her Rubenesque self into a vaguely see-through catsuit. It's glorious, yes, and yet I have to admit that something here is still off, something is wrong. Each girl inspires in me the same sad reaction ...

Oh, you pretty things! How I wish I found you sexy!

"We're so inundated with tits and ass all day," says my friend the Edgy Fiction Writer, a 32-year-old man who lives in New Jersey, echoing something that I heard from about 20 guys during a wholly unscientific survey, "that you just can't be as enthusiastic about seeing cleavage compared to a guy in the '50s. It's depressing. Could you imagine what it was like back then? A woman takes off her shirt and you go into conniptions. You'd be a permanent 13-year-old boy." Another man in this late 20s, a Manhattan movie producer who'd put a hit on me if I named him here, confessed to having recently issued a personal masturbatory edict: Having OD'd on pornography, extraneous erotic inspiration is now limited to workout programs, to honeydew skin and glistening spandex, because A) that's all he could find when he was a 13-year-old boy and B) everything else is just so ... obvious. You're finished before you've started.

And now here I am, staring at a sea of pinups, these beaming, lustrous fawns. Oh ... and wait a second ... something is ... starting to ... happen. A second ago they were nothing but retro kitsch, but now ... I get it. The appeal of the Vargas Girl -- and so much of the Marilynesque sexuality of that era -- is complicated, a hall of mirrors that requires some patience for a mind like mine to grasp in a manner that moves past the intellectual and into the visceral. These creatures are all about negative space, about simultaneously revealing and concealing. "Hey, there's more to see here," these dewy-eyelashed girls whisper to me, "things you can't possibly understand. And, if you're lucky, you may one day learn. But, my poor pathetic darling, you'll never be that fortunate, so look hard, stare at me until it hurts. Also, I smell like roses." Diablo! My only option is to throw up my arms and beg.

Our modern sexpots, on the other hand, exist in a gradient of pornography, from softcore (Christina Aguilera, Lindsay Lohan) to hardcore (Jenna Jameson and her moaning minions) to the newly etched midground (Paris Hilton, Pamela Anderson). "You'd like to have sex with me, wouldn't you?" they shout from bullhorns. "Good, you can, because I'm easy. Also, I smell like plastic and rubber." Don't get me wrong: I am a man, and I'm fine with these women in my life in all their bubbly, rock-stupid brand of hotness. The problem is that they're perishable, these brash explosions of distorted femininity: You get everything immediately and, a second later, there's nothing left to desire, just a sarcophagus of extinct wants and wishes. They are all answers, whereas the Vargas Girl is 100 percent questions, a million "What ifs ...?" neatly packaged in a pink and white corset. They are sexy in a way that you can't quite imagine what it would be like to actually have sex with them, which, really, is what it's all about. After all, the best sort of sex is when your mind gets overloaded, panics, hands over the reins to your body, and the only thought left whirling through your shattered little brain is that you can't believe that what's happening is actually happening.

Am I getting out of hand here? Yeah, probably. Nostalgia is crack; life an exercise in suspending disbelief, in getting sentimental about things you don't really know anything about. Was it actually sexier back then? Did young men experience more of a cosmic shock at the sight of live female flesh than we do today? And what about the bedroom mechanics? Were they legitimately more fiery, or were they a series of painfully earnest fumblings and bumblings that can't compete with our all-knowing age? It's impossible to say. Innocence is bogus because it's relative. For all I know there was some 25-year-old in 1952 longing for the days when a sliver of a woman's ankle brought on hormonal seizures. Still, I can't help thinking that we've reached a sort of zenith of sexual exposure. I mean, where to go from here? Holographic porn? Reality TV for the bestiality set? (Jeff Zucker, I want a finder's fee!) Hell, I don't even need to pretend to be a '50s-era man to pine for a more wholesome past.

A case in point: I was born in 1979 and was 13 years old when "Basic Instinct" was released, a film that feels G-rated now but which represented the first ever full-frontal female nudity I'd seen that was ... moving. Every day my best friend James and I would go to the video store and he'd distract the guy at the counter while I put the "Basic Instinct" tape into the case of something innocuous like "Gleaming the Cube." Then we'd go home, and stare and study. The bottom line was, like the mythic man with his Vargas Girls, we felt lucky getting these peeks, as if someone like Sharon Stone was one of, say, 30 nude women we'd ever see in a lifetime, pixelated or in person. Little did we know we'd grow up and they'd be everywhere, bursting forth from every corner of culture, that we'd one day become eager young men hoping for women to ... put some clothes on so we could find them crazy attractive again. That way, we'd be reminded of all we don't know. That women have the secret, whatever it is.