A driving trip through Alabama reminds a U.S. senator from Wisconsin how radical conservatives are robbing hardworking people of the American dream. 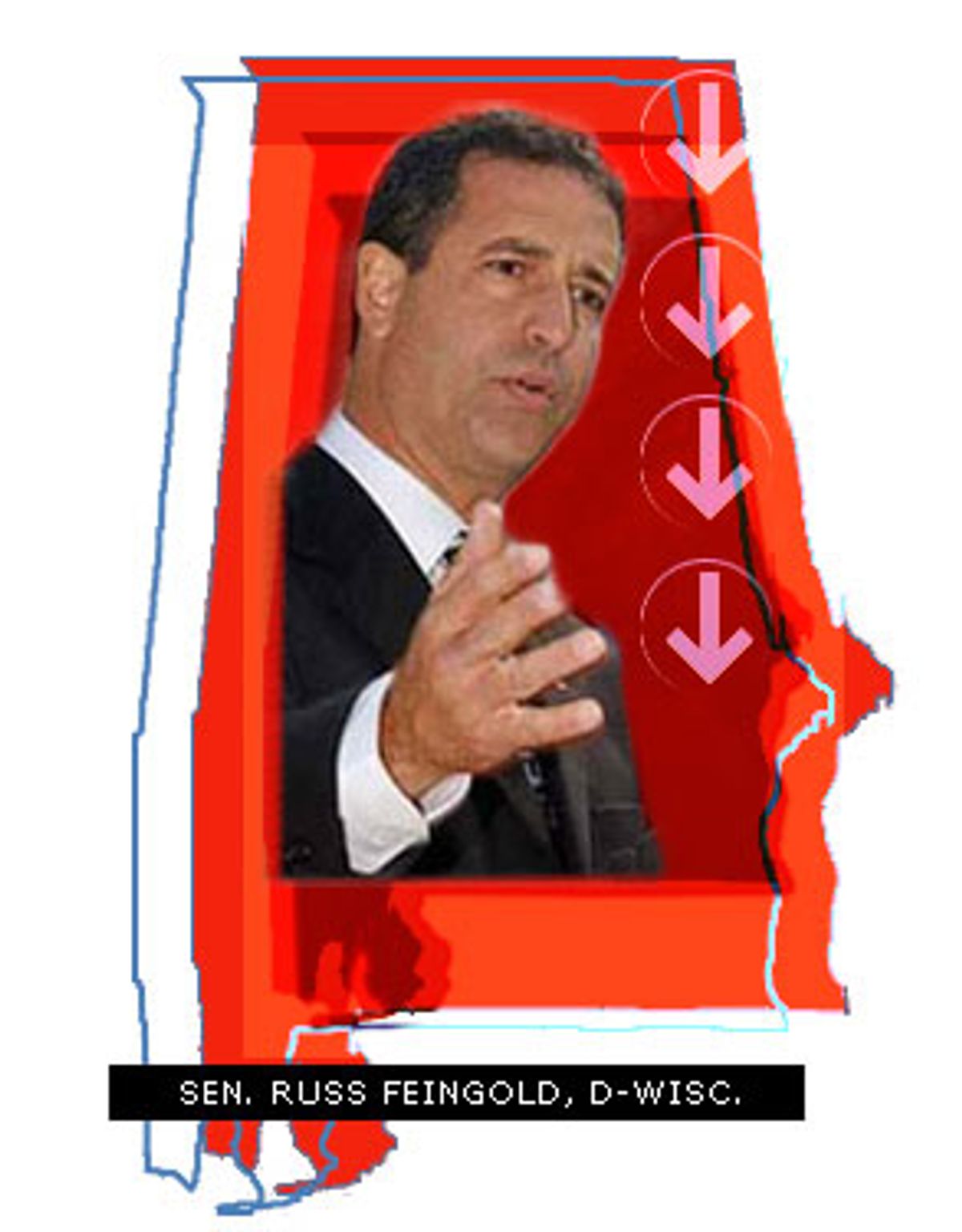 On Nov. 2, I was fortunate enough to be elected by the people of Wisconsin to a third term in the U.S. Senate. Right after the election, I confess I immediately went looking for a warm place to golf. So I piled into a van with some friends in Milwaukee and drove from Wisconsin to Alabama. All of us were thrilled with the beauty of the state and the kind reception we Northerners received from everyone. Then my wife, Mary, drove down to collect me for one last round of golf and a brief, two-for-the-road vacation through the South. She met me in Greenville, Ala.

As she made the turn onto Exit 130 in Greenville, Mary saw the same little building my buddies and I had seen a day earlier. Banners on the roof read "Republican Headquarters" and "George W. Bush." At the very top of the roof, a celebratory message had been unfurled. It read, simply, "Hallelujah." She had the same thought that had occurred to the rest of us when we first saw the tiny structure and the big banners: If the red-and-blue map of the United States were to have an intensity meter, this place may well glow as the reddest spot on the whole map.

That night, the two of us dined at the Bates House of Turkey, just behind the Republican headquarters. When we ordered at the counter, we noticed George W. Bush bumper stickers offered for sale next to the cash register -- a hand-lettered sign said the price was $1, and a nearby jar was stuffed with bills. The young lady behind the counter followed our gaze and then looked across at us. "We're Democrats," my wife said, with a smile. "I'll have the barbecue turkey sandwich." The young lady smiled back and thanked us for "not leaving like some people do when they see those stickers." We assured her we were there for the turkey. To prove it, we ate all the turkey we could, had lemon icebox pie for dessert, and didn't talk politics.

After our meal that evening, we drove around Greenville to see what there was to see. And what we saw -- check-cashing stores and abject trailer parks, and some of the hardest-used cars for sale on a very rundown lot -- told us the people there were hurting economically and deserved more than they were getting.

Now, I know that some from Alabama reading this may dismiss my comments as those of a lesser Neil Young, just another person Southern Man doesn't need around anyhow. But I've traveled enough to know that there are Greenvilles all over this country, including in my home state of Wisconsin. Having held town hall meetings in every one of Wisconsin's 72 counties each year for the past 12 years, I've heard repeatedly of the difficult struggles that so many working families are enduring in both urban and rural areas. And in this Greenville, the one in Alabama, I connected again to an American experience that isn't dictated by whether you live in a red state or a blue state.

The people of Alabama appear to be among the most generous and most unsung philanthropists in this country. What they give is unimaginable to many others and they give it time and again: They regularly give their turn at the American dream to someone else. And they give it simply because they're asked. So many people in Greenville don't seem to have basic healthcare coverage or promising job opportunities. Meanwhile, their children volunteer to risk their lives in Iraq and Afghanistan. I can only be humbled by their sacrifice.

But because I am a lawmaker and a student of history, I also know who has been asking them to give so much. And I can only wonder how many more generations of central Alabamians will say yes when the increasingly powerful Republican Party asks them to be concerned about homosexuality but not about the security of their own health, about abortion but not about the economic futures of their own children. As my wife and I drove through Greenville that night, I thought how fundamentally unfair this all is in order to support an increasingly radical conservative movement.

Now, some may think that Alabama and Wisconsin are the polar opposites of American politics. But in both states I've found that -- along with sharing a sincere appreciation of a good turkey dinner -- too many hardworking people are losing their battles for decent paying jobs and adequate healthcare. I'm tired of seeing the power-hungry persuade the hardworking people of this country that the only way to preserve important values is to vote against their own families' basic interests. I believe that the working people of both states have sacrificed for other people's agendas for too long. And I believe that any political party or political movement or political candidate who would consistently say this would be heard throughout America.

We need to go to the Greenvilles of every state, red and blue, and say, "Thank you. You've sacrificed long enough. Now it's your turn at the American dream."

Russ Feingold, Democratic Senator from Wisconsin, will be sworn in for his third term on January 4, 2005.