We've got the perfect holiday gift idea for all the Condi-worshiping, feminist-hating, gun-toting females on your list! 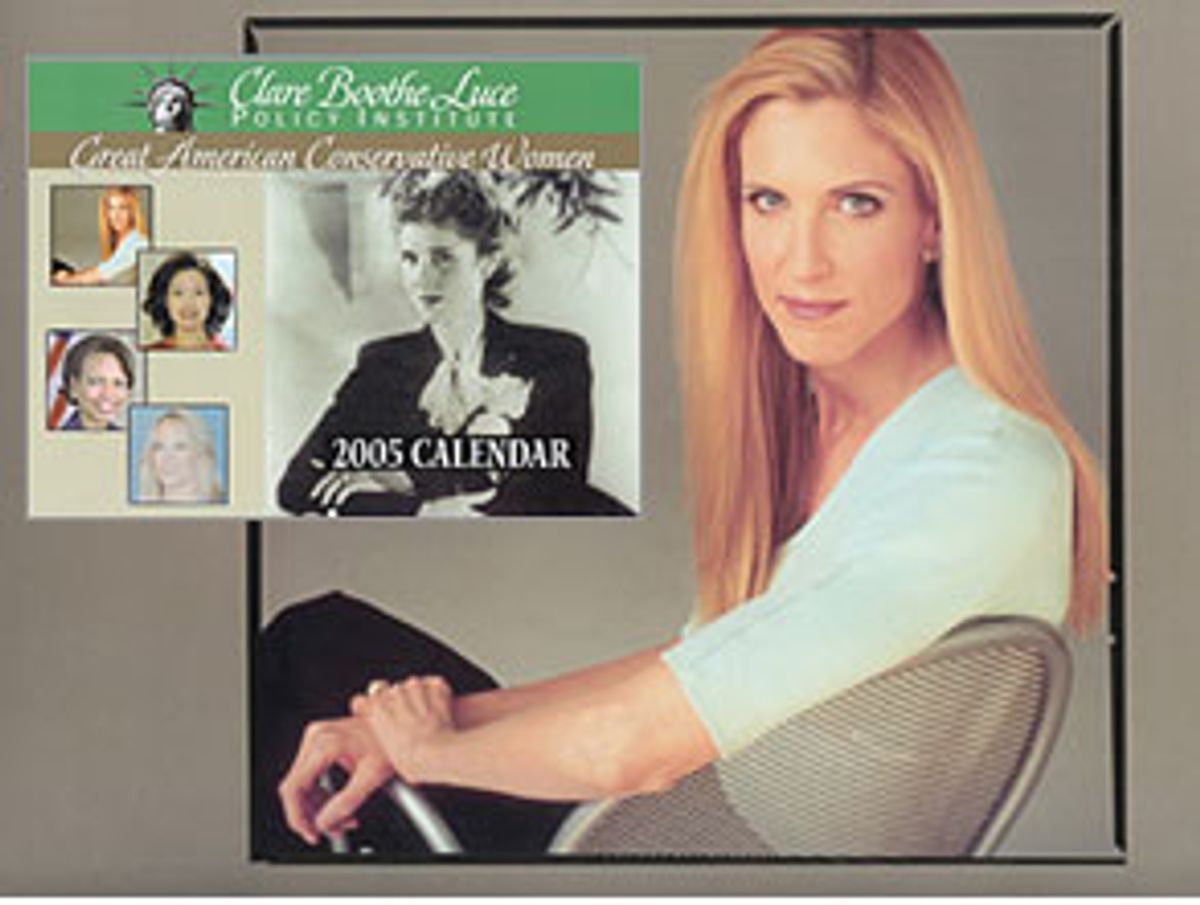 Perhaps inspired by last year's Babes Against Bush calendar, the Luce Institute decided to print the calendar, according to spokeswoman Audrey Mullen, "because they have a lot of really terrific women in their speakers' bureau and who support the Policy Institute. They want to get the message out there that there are some terrific conservative women who are also great role models for young women [and who] are not what you see promoted in the media generally."

The Luce Institute draws a pretty hard line on the kind of women it thinks are "promoted in the media generally." The institute's Web site features archived articles that refer to Hillary Rodham Clinton as a "Senate diva"; celebrate "Spin Sisters," Myrna Blyth's attack on the liberal women's media; and argue that Take Our Daughters and Sons to Work Day is a "stealth feminist holiday" that "victimizes sons and daughters." There's also a piece about the National Organization for Women called "They Should Call it THEN" and a report on Gloria Steinem's 2000 wedding to the since deceased David Bale, charitably headlined: "A Fish Gets a Bicycle."

So you cannot accuse these people of being humorless. Which could explain the calendar, which features 12 conservative chicks in full Talbots finery. The calendar, which can be purchased through the institute's Web site for a $25 donation, is being given away free at institute events, to servicemen and women and on college campuses. Don't hurt yourself while picturing a photo of Jeanne Kirkpatrick hanging on a dorm room wall next to a glossy poster of "O.C." heartthrob Benjamin McKenzie.

The 2005 calendar year kicks off with an image of Luce herself. The journalist, editor, congresswoman from Connecticut and ambassador to Italy is quoted as saying, "Do one thing well. You can have it all, but you will be very tired." Star Parker, a former welfare mother who, according to the calendar, "reformed her life, received a degree in marketing, and launched an urban Christian magazine," graces February. March belongs to a smiling Christina Hoff Sommers, author of "Who Stole Feminism?" and "The War Against Boys." The calendar quotes her embrace of the phallus: "It is unfashionable to say so but I will say it anyway: The energy, adventurousness, stoicism, and competitiveness of normal, decent males is responsible for much of what is right in the world."

Ronald Reagan's treasurer Bay Buchanan comes next and says, "I go to college campuses. I talk to these young women, as brave a people I've ever met, who have spoken out on their college campuses ... They're chastised, they're ostracized, they are literally jeered. They go up before their student bodies and the feminists show up and are screaming at them. This is on these wonderful campuses that are supposed to be for freedom of speech."

This is Buchanan's entire calendar quotation, taken from a 2001 speech at the institute's Conservative Leadership Seminar. This may be just the sound of another chastising feminist, but who is she talking about here? Who are "these young women" who are getting "literally jeered"?

One calendar denizen who has surely been jeered by feminists is May dreamboat, radio shrink and famed gay-hater Dr. Laura (Schlesinger). She appears, all dimples, with a helmet of straw-colored hair that seems to glow seraphically. "I deeply disdain the feminists for what they have done to generations of women and to children who pay the price of lost, intact, loving stable homes with married committed moms and dads," Dr. Laura is quoted as saying. She is surely gratified that feminists disdain her right back.

June brings us lawyer, columnist, Eagle Forum founder, ERA buzz-kill and all-around good-time girl Phyllis Schlafly, who is followed in July by thin political pundit Ann Coulter. August's Michelle Malkin, a conservative columnist, says, "When liberals won't clam up about their sordid sex lives and we object, they call us rude. When liberal women raise their voices, they are praised as 'passionate.' When conservative women raise their voices, we are condemned as 'shrill.'" Well, if it walks like a whistle and talks like a whistle ...

Back-to-school September features the country's most powerful black woman, Oprah! Kidding. It's Condi. Unfortunately, the calendar must have been printed too late to catch her promotion to secretary of state, since she is listed as national security advisor. The best part of Condoleezza Rice's page is the smaller secondary photo, supplied by the White House, showing her with Dick Cheney in the Presidential Emergency Operations Center on 9/11, conferring by phone with President Bush, presumably from the presidential emergency "Get me the fuck out of here" plane.

Likable pundit Monica Crowley is next, but she's totally overpowered by November's Jeanne Kirkpatrick. A Leavey professor of government at Georgetown and senior fellow at the American Enterprise Institute, Kirkpatrick was the first woman appointed to serve as a permanent representative of the U.S. to the United Nations. She is quoted as saying, "People have often said to me, what did I do that was the most interesting thing in my life. The answer is having a baby ... Having and raising babies is more interesting than making speeches at the United Nations. Believe me." Especially the spitting up.

Clare Boothe Luce was a journalist, and so it's only fitting that the calendar that bears her name have a great kicker. And by God, it does, in December, when it features gun rights advocate Shemane Nugent, wife of Ted, and coauthor with her husband of a book called "Kill It & Grill It." She is quoted as defending the Second Amendment, and the smaller picture shows "Ted and Shemane Nugent with their teen son, Rocco, at their ranch in Texas." In camos. All holding machine guns.