"The Phantom of the Opera" 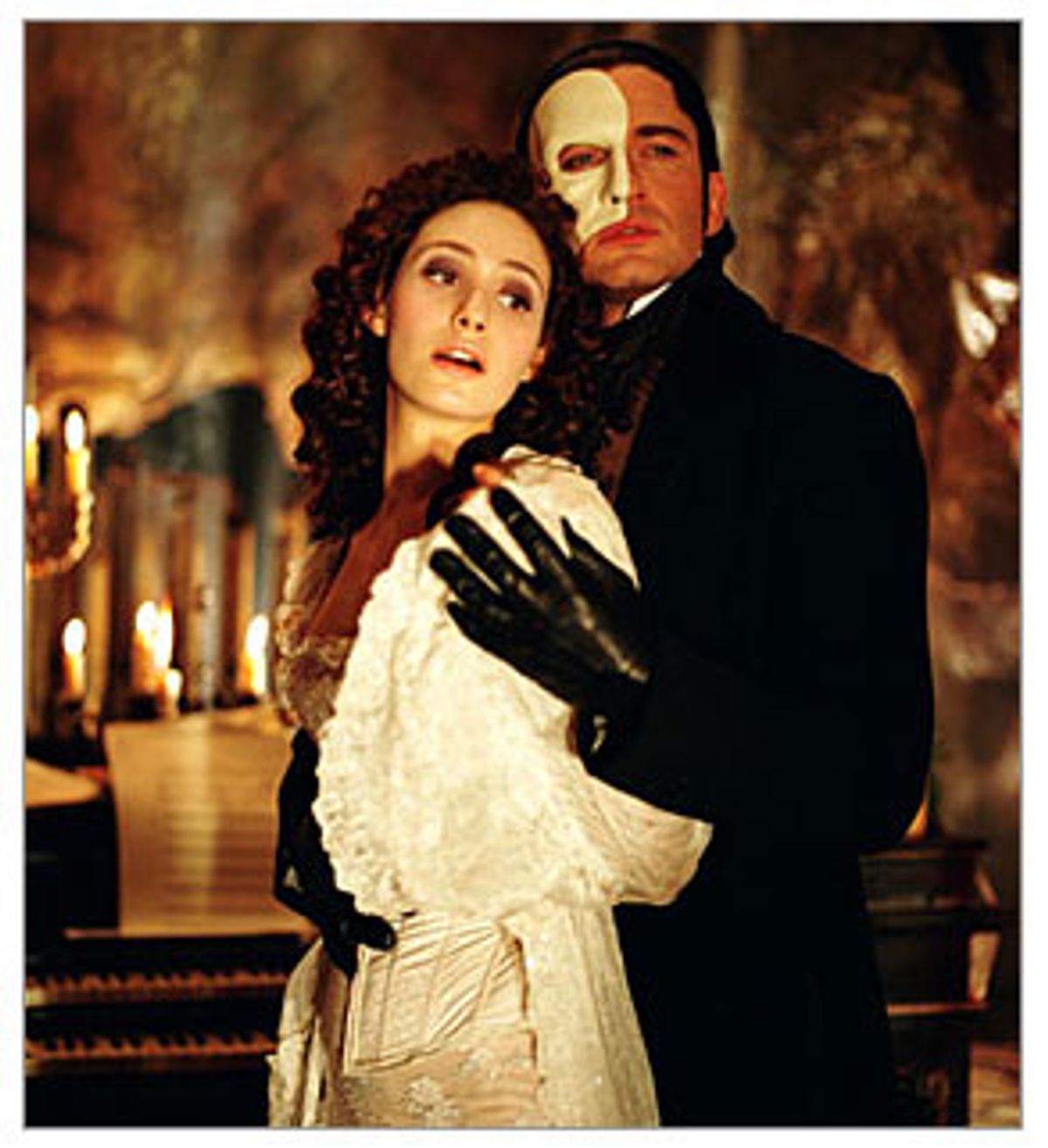 In Joel Schumacher's incomprehensible "The Phantom of the Opera," adapted from Andrew Lloyd Webber's gargantuan crowd pleaser, a disfigured musical genius (the Phantom, played by Gerard Butler) lives in the sewers of Paris and loiters furtively at the local opera house, keeping an eye on a young singer there, 17-year-old Christine (Emmy Rossum). He has a special interest in her, you see, because he trained her himself, secretly teaching her coloratura-by-numbers in those off-moments when he isn't sulking around his lavishly appointed underground lair. He's her self-described "angel of music," and he's scheming to have her for his bride for all eternity -- bad news for Christine's childhood sweetheart, Raoul (Patrick Wilson), who has returned after lo these many years to wear romantic blouses and court her, not necessarily in that order.

A battle for Christine's heaving bosoms and milky thighs ensues. Will she go off with her Fabio-tressed sweetie for a lifetime of kissin' and cuddlin'? Or will she "Let the dream begin, let your darker side give in," as the Phantom implores her -- in other words, have hot, wild, debasing sex with the pissed-off bully in the mask? Who isn't really such a bad guy, just misunderstood. And who also, by the way, represents the spirit of her dead father.

Now it can be told: Although the press has connivingly led us to believe otherwise, Andrew Lloyd Webber and Joel Schumacher are really pseudonyms for two 11-year-old girls from Allentown, Pa., who, disgruntled because their parents wouldn't buy them canopy beds, decided to sit down and write themselves a musical, darn it. And they'd make a movie out of it, too, just you wait and see. "The Phantom of the Opera" is the long-awaited result.

There's no other way to explain the existence of such grandiose poot. Webber's material is beloved by many, but it baffles me. The songs don't sound operatic or even melodic, and there's almost zero subtlety in the dynamics. Songs start out big and stay big -- there's something thuggish about them, as if they'd reach out and grab you by the collar if you even thought about fleeing the theater in boredom or horror.

Then there are the lyrics: "Though you turn from me to look behind, the phantom of the opera is inside your mind." Somebody's been listening to the Amboy Dukes again. Come along if you care! Come along if you dare!

"Phantom of the Opera" feels less like a movie than a nonstop amusement park ride designed to make people feel they really got their money's worth. There's something blatantly condescending about the aggressive lavishness of the musical numbers, as if a bunch of big-city suits got together and said, "Let's have big sets! And lots of gold and lace on the costumes! And singing, lots of singing. Who cares what kind, just lots of it. John Q. Public really loves singing."

This film "Phantom" takes everything that's wrong with Broadway and puts it on the big screen in a gaudy splat. As live shows become increasingly more expensive to mount, the tickets become more and more expensive. Understandably, having spent all that dough, audiences expect a spectacle -- not even necessarily a good story, or hummable songs, or character development that makes sense. They're just waiting for the chandelier to fall.

The stakes are lower in the movie theater -- after all, 10 bucks a ticket is a lot less than $100, and a trip to the multiplex doesn't entail trekking to New York, or to the nearest big city to catch a road-company production. But the terms have already been set. A movie version of "The Phantom of the Opera" has to wow 'em at all costs.

To that end, Schumacher goes all out, making everything extra big and extra fancy. The production design is lavish, in a pissing-cupid kind of way. When the Phantom lures the innocent, wide-eyed Christine (she's done up to look like a Keane painting with breasts) to his damp, candlelit grotto, they walk through winding corridors, trot along on horseback and drift on a gondola to get there (singing, if you could call it that, all the way). Christine is both intrigued and horrified by the Phantom's dark, unspoken but obvious desires, and when she faints, he drapes her limp, peignoir-clad body on a bed shaped like a golden seashell. Later, she awakes and tries to remove his mask, which clings to his face by no visible means. (Perhaps it's stuck on with pus?) Her curiosity angers him, and in a rage, he sends her back to the land of the living. Ooh! Punish me with kisses, why don't you?

All of this may make "Phantom" sound like good, campy fun, but it's far too solemn and overfed (and too slow) for that. Schumacher lays the faux-Gothic romance on with a trowel, and all of the actors seem lost amid the glitz. Miranda Richardson appears as the stern, mousy Madame Giry, the opera company's strict den mom -- she wears her hair in a tight braid and delivers every line in a Cloris Leachman "He vass my boyfrent" accent. Butler is supposed to be menacingly sexy, but he reminds me of nothing so much as the bland, waxy Lotharios you used to see in bad perfume commercials of the '70s. Rossum has just one mood, that of tortured innocence, and she flogs it -- she's exhausting to watch. Wilson can sing, and when he's on-screen you almost feel yourself beginning to breathe again. And the lovely Irish actor Ciarán Hinds appears in a dashing pompadour and mustache that give him an uncanny resemblance to the young Frank Morgan.

But Schumacher is more like a Humvee than a director. He barrels ahead with reckless disregard for his actors' capabilities and limitations -- all he seems to care about are the look of the thing and the scale. "The Phantom of the Opera" lasts about 629 minutes (or maybe it's just 627), and it isn't over until the chandelier falls. If only we weren't left feeling like its crushed, helpless victims, pinned under 1,000 pounds of cheap crystal.