Christmas music that doesn't stink from the Silent League and Rickie Lee Jones. Plus: The best source for free, legal mp3s. 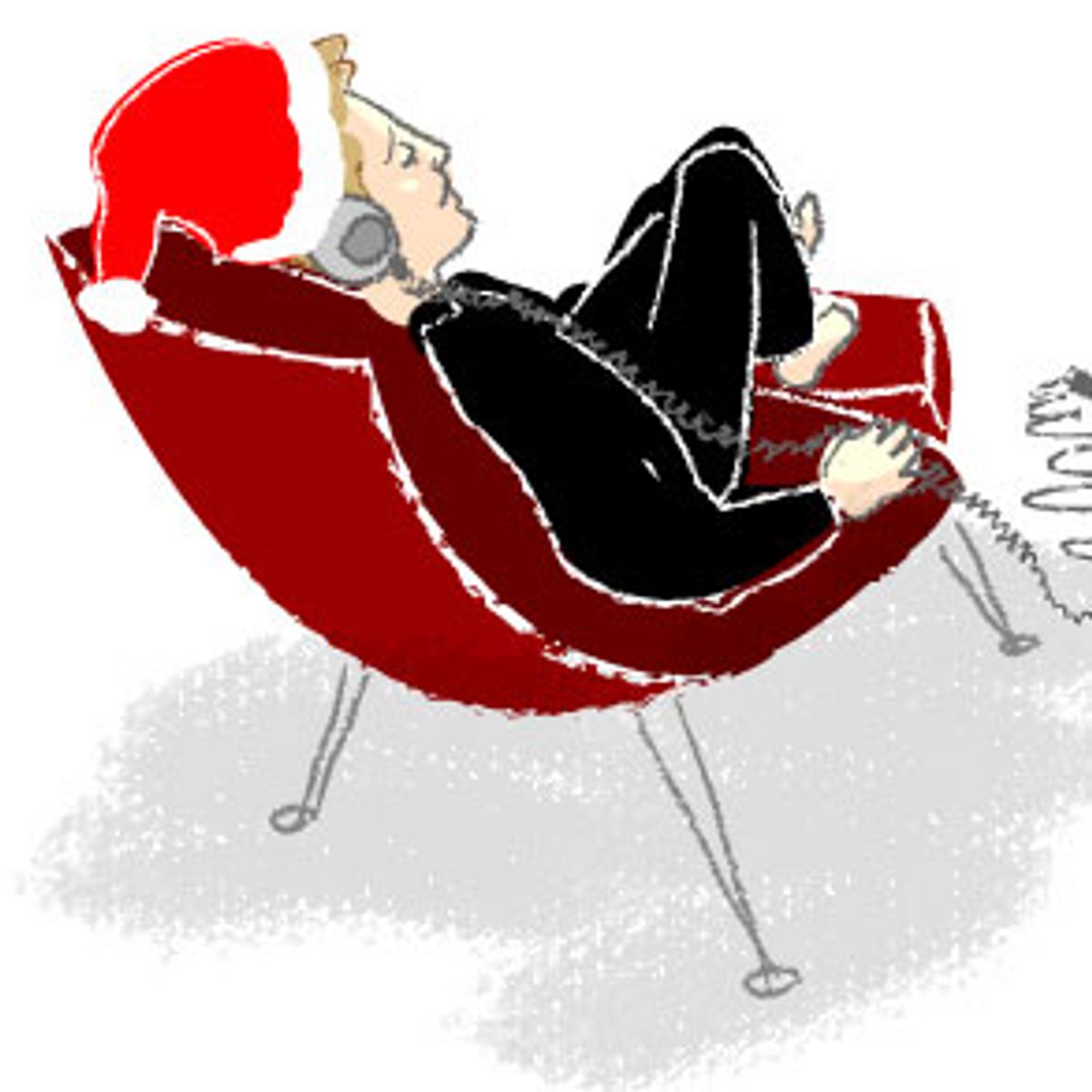 This is the last Wednesday Morning Download until 2005, so I have a handful of assorted bests, worsts and notables of 2004:

Best album title:
McLusky's "The Difference Between You and Me Is That I'm Not on Fire"
Honorable mention: The Silent League's "The Orchestra, Sadly, Has Refused"

Most overpraised record of the year:
Brian Wilson's "Smile"

Musical innovation I'm most eagerly awaiting:
An intimate, voice-inside-your-head, talking-to-himself rapper, the Cat Power of hip-hop. It's the logical next step.

Most astounding gap in quality between two records from a single artist:
From the thumb-twiddlingly boring, hubristic depths of Elvis Costello's maiden orchestral voyage "Il Sogno" to his pretty damn good rock record "The Delivery Man."

Most embarrassing live TV moment:
No, not Ashlee Simpson on "SNL," poor girl. It was Hoobastank butchering their already horrible hit single "The Reason" on the MTV Music Awards. At least Simpson knows she can't sing, and had the good sense to use pre-recorded backing tracks.

"Christmas Time Is Here," the Silent League, single
Wow, Christmas music that's actually really good! And not just in an "Oh well, that's pretty good for Christmas music" kind of a way, which is usually all I can muster. The original Vince Guaraldi song, written for "Peanuts," is a classic, of course. But this cover, by WMD favorites the Silent League, is astonishingly beautiful, reverently faithful to the original, but wrapped in a blanket of diaphanous, pellucid sonic fabric. Free Download: "Christmas Time Is Here"

"Have a Merry Christmas, Rickie Lee Jones, Internet-only single
Free Christmas music from Rickie Lee Jones: "Oh Holy Night" (free download here) is all goofy and Celtic/baroque, with a harp, a harpsichord and a bagpipe, and "God Rest You Merry Gentleman" (free download here) is a bit too much in the finger-snapping smooth-jazz/soft-rock direction that Jones has fallen into in recent years. But even, or perhaps especially, as she becomes more and more mannered, now sounding like she has a permanent head cold and stuffy nose, Jones remains a captivating singer. She has developed into a brilliant interpreter of standards, and her "Have a Merry Christmas" is a sweet, simple rendition of the song, accompanied by just guitar and bass. Free Download: "Have a Merry Christmas"

"A Singular Christmas," Brian Whitman
This is, at least conceptually, the ultimate Christmas music. Brian Whitman has written a computer program called Eigenradio, which, as best as I understand it, processes large amounts of music, isolates the essential elements, and spits back out tracks that synthesize them. He fed it a huge amount of Christmas music, and out came this 16-track record, which in theory should contain the essence of Christmas music, but in reality sounds like an only mildly diverting experimental electronic/ambient record. The whole record is available for free download here.

"Windows," CMA, "All Over"
CMA (Cool Man Association) is Grouch and PSC, two MCs from the Living Legends, the Southern California crew that also includes Murs. Like all Living Legends releases, CMA's new "All Over" is self-released -- one of the most impressive things about this crew is the level of success they've had while remaining completely independent from the label system. The record's first single, "Windows," is a sweet, slightly sentimental retelling of childhood pains and triumphs, with touches of surreal wit: "I remember the rainy days/ Mom used to drop me off at school in a bucket." Free Download: "Windows"

"Birthday," Junior Boys, "Last Exit"
Plenty of people (a number of them featured in this column) have tried out the idea of wimpy indie-style vocals over electronic beats. The Ontario-based trio the Junior Boys have executed it better than anyone else yet -- partly because they've absorbed and sublimated (sans big booty bass) some of the skeletal rhythmic ingenuity of recent mainstream hip-hop. These guys have lit the blogs and Internet zines on fire, eliciting rapturous reviews that try to explain how perfectly the Junior Boys combine fragility and funk. ("Talk Talk produced by Timabaland" is my favorite formulation.) "Birthday" was originally released last year on an EP of the same name, but it also appears on Junior Boys' recent full-length debut, "Last Exit." Free Download: "Birthday"

Have an opinion about this week's downloads? Check out the Wednesday Morning Download thread on Table Talk.