Conservative bloggers tar an AP photojournalist with complicity in Sunday's street execution in Baghdad -- another cheap shot at the "left-wing" media. 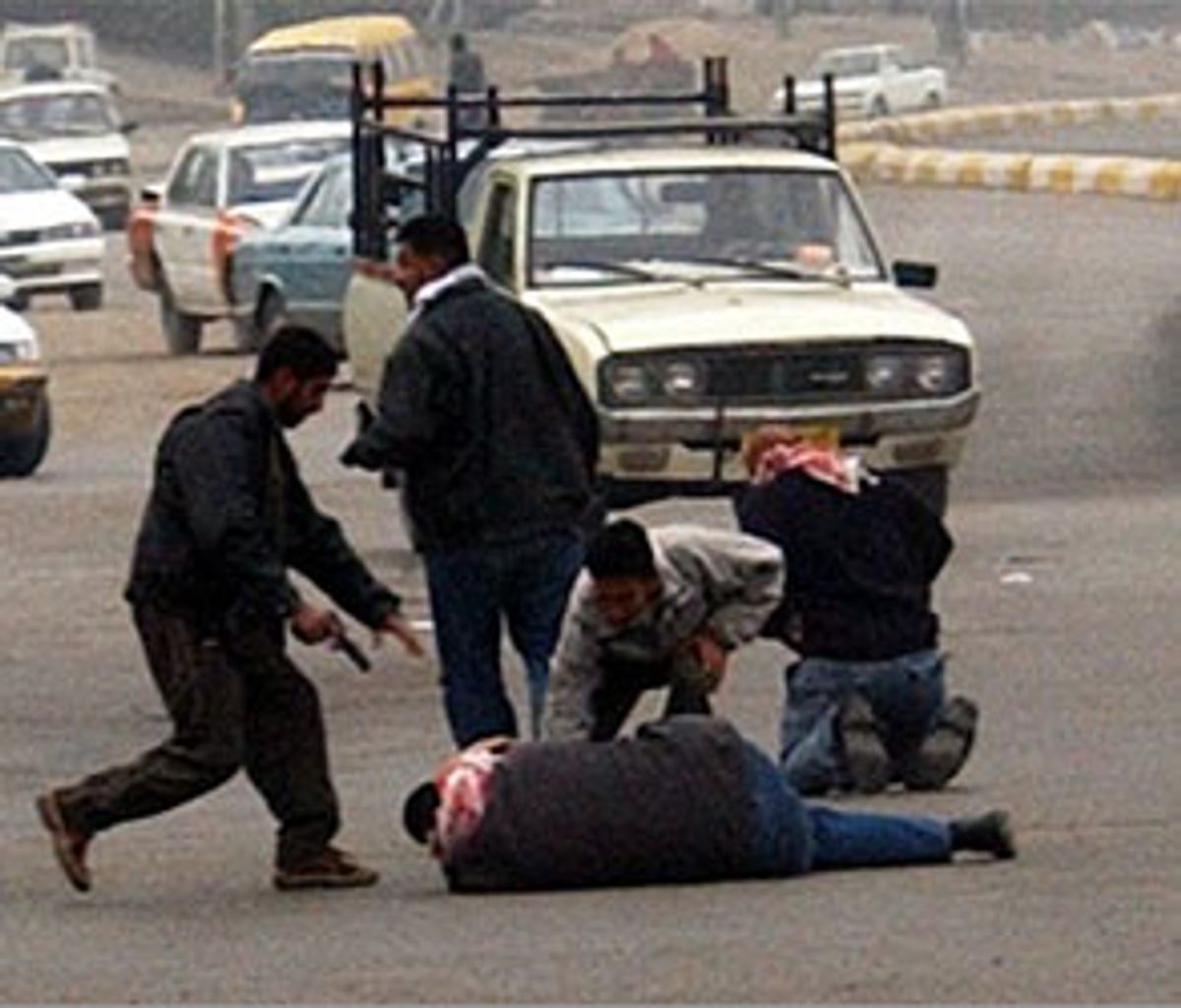 Conservative bloggers suggested Monday that an Associated Press photographer was complicit with militants who executed three Iraqi election workers on Baghdad's dangerous Haifa Street on Sunday. They accused the photographer of knowing in advance that the executions were to take place; rather than warn the authorities, they insinuated, the photojournalist went after the disturbing story and images to shock readers and smear the Bush administration's war effort.

"Even with today's proliferation of compact photographic equipment, a legitimate photojournalist rarely gets the opportunity to capture an execution," wrote the pseudonymous "Wretchard" of the Belmont Club blog. "It may have been pure luck, but it was surely the longest of odds that would have brought an Associated Press cameraman to the site of a surprise attack on two [sic] Iraqi electoral workers."

Wretchard compared the AP coverage with the famous Vietnam-era photo taken by Eddie Adams, who captured the execution in Saigon in 1968 of Vietcong Capt. Bay Lop by South Vietnamese Gen. Nguyen Ngoc Loan. But Wretchard argues that the political trappings are different this time.

"Although the Eddie Adams photograph was widely used to illustrate the 'brutality' of the Saigon government, the photos taken by the Associated Press are unlikely to reflect badly on the electoral workers' killers. Press reports highlight the confidence and boldness of the insurgents: 'Both of the victims shown in the sequence wore traditional Arab headscarfs. In contrast, the attackers were bareheaded and apparently unafraid to show their faces,' suggesting that 'collaborators' must conceal their faces while the Ba'athists stride with impunity through the light of day. It was fortunate for the AP that their photographer was accidentally there."

Running with that theme, blogger Roger Simon called on the AP for an explanation.

"If their photographers were notified of the assassination in advance and, instead of warning the electoral officials, chose to hurry to the scene with their cameras ... well ... we all make our judgments from there," Simon wrote. "We should all be waiting for a clarification from the Associated Press. I invite them to make one."

There are several faulty leaps being made here. For starters, in the very first sentence of his story on Sunday, AP writer Slobodan Lekic described the killings as a "brazen daylight attack" carried out "in cold blood." Wretchard's claim that the AP coverage is "unlikely to reflect badly on the electoral workers' killers" is disingenuous at best. Further, no clear evidence exists that the killers were Baathists, as opposed to militant Islamists or another subversive group. Wretchard and Simon also seem to have overlooked why journalists could have had plenty of reason to be in the vicinity of Haifa Street. As Lekic noted in his report, the "busy, traffic-clogged street has been the scene of almost daily gunfights between the insurgents and U.S. troops and the forces of the U.S.-installed interim government."

A source at the Associated Press knowledgeable about the events covered in Baghdad on Sunday told Salon that accusations that the photographer was aware of the militants' plans are "ridiculous." The photographer, whose identity the AP is withholding due to safety concerns, was likely "tipped off to a demonstration that was supposed to take place on Haifa Street," said the AP source, who was not at liberty to comment by name. But the photographer "definitely would not have had foreknowledge" of a violent event like an execution, the source said.

This is hardly the first time that pundits on the political right have sought to portray a left-wing media insurgency bent on capturing grim images in U.S.-occupied Iraq in order to undermine the Bush administration. Last April, the editors of the New York Post blared accusations of the AP cutting a deal with Fallujah's mutilators and helping to maximize the carnage of the four American military contractors murdered there.

Reporting from the most perilous sectors of a war zone is a complicated business, both in terms of access and safety. The kind of flimsy commentary-with-an-agenda bouncing around the conservative blogosphere right now regarding an AP insurgency against the war effort is not only a disservice to the public but a dishonor to the many journalists who have been injured or killed carrying out their dangerous mission in Iraq.