The temple of Lom Kaen in the devastated tourist hub of Phuket, Thailand, is for many the last stop in the search for missing loved ones. 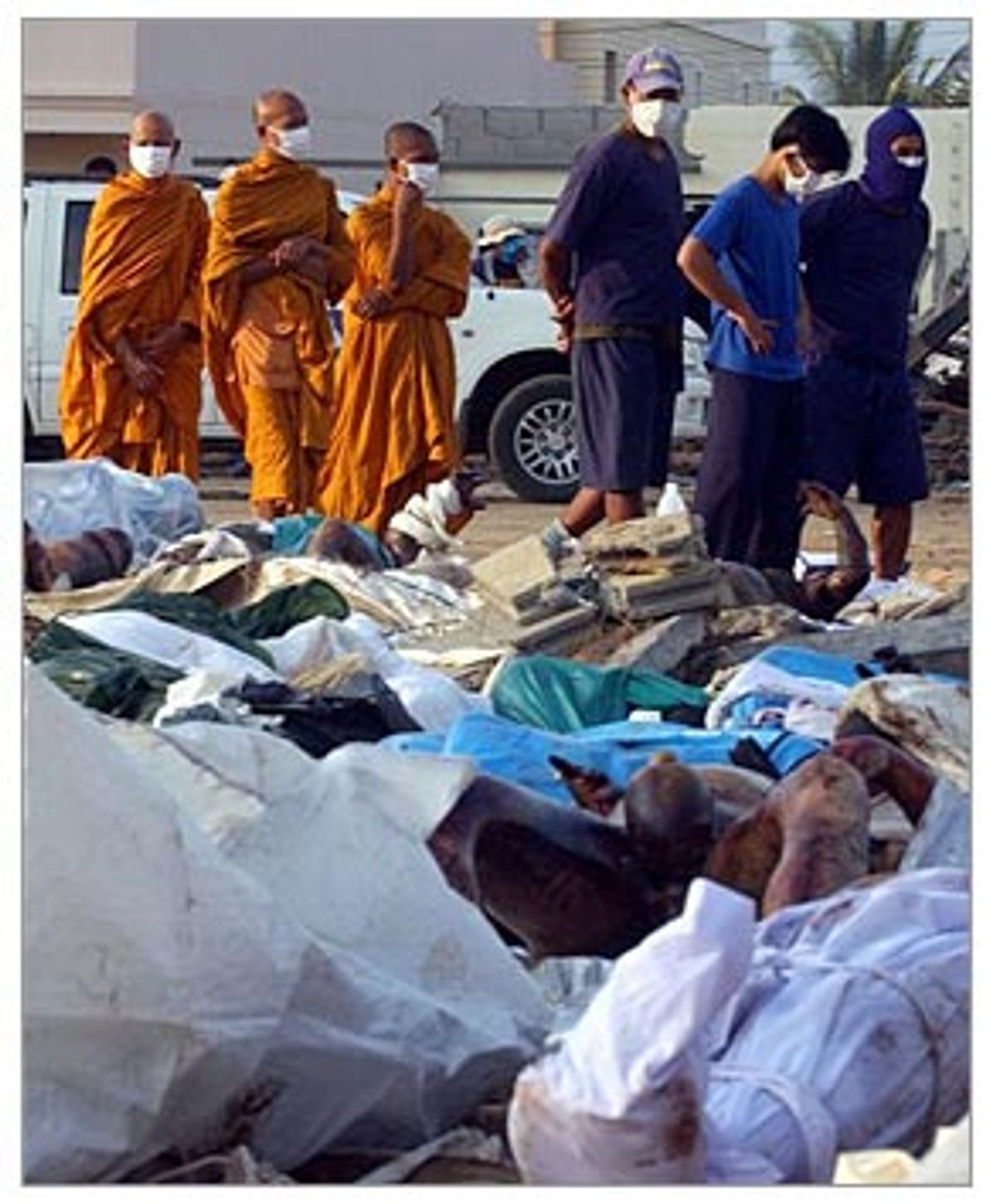 No one knows what to do with all the bodies. In death, they're all the same -- natives, foreign workers, Western tourists. They're lined up next to each other around the golden temple of Lom Kaen in the small community of Khao Lak. No one knows how many bodies there are. Several hundred, certainly. Out of necessity and the need to keep them from getting too much exposure to sun, relief workers have wrapped the corpses in makeshift shrouds and tied them with cords. But not even the provisional packing can dampen the biting and pervasive smell of death. Every few minutes, a new pickup truck arrives with red blinking lights to deliver another load of bodies.

On Wednesday, the first fires were started. "There are just too many bodies," a policeman said. He jabbed at the fire with a branch, hoping to speed the impromptu cremation along. The official death count for the region is close to 2,000. In preparation for the corpses that arrive at frequent intervals, people have collected wood and as much gasoline as they can round up. The temple is surrounded with the stuff. Before each corpse is burned, a photo is taken in hopes that it can later be identified. But many of the bodies are so disfigured that it's nearly impossible to recognize anyone as he or she was in life.

Victims' families sit next to the funeral pyres, watching and mourning. Many here have lost more than one family member. Still, these impromptu funerals are marked more by shock than pathos. A few people have brought along straw mats to squat on. Others have placed a single memorial candle in front of them and sit in silence. All are wearing masks -- once white, now yellowed -- over their mouths to keep the smell away. Intermittently, people spit on the ground. It's as if they want to keep from swallowing death.

Along the Phuket island coast -- once a pearl of tourism -- everything has been razed. Sprawled across the beach promenade are the scattered remains of what was once a booming resort area. Now everything is twisted into itself and coated in thick layers of mud. Cars, palm trees ripped from their roots, and pieces of beach huts litter the streets. The region is "finished," said one of the main tourist guides.

Amid the Thai families surrounding the temple, a retired Swiss man sits on a plastic chair next to his son. Both are wearing masks. "This may sound strange," said the father, white-haired Josef Vavrina. "But I was happy when I finally found my wife here." He then grew quiet, staring into the fire.

Last Sunday should have been a perfect day for the retired couple. "My wife, Maria, was celebrating her 63rd birthday and the sun was shining," Vavrina said. That morning, the two had felt the underwater quake as a little vibration. "On my nightstand, there was a glass of water and I saw how the water moved," he said. But they hadn't paid much attention to it. Maria even told him not to worry, that it was likely just a little tremor. When he saw the water moving quickly from the coast to form a deadly wave, he ran back to his bungalow, hoping to grab his camera and photograph the phenomenon. Many other tourists had the same idea. By the time he got back to the beach, the wave was getting ready to crash. It was at least 20 meters high. "I screamed as loud as I could," Vavrina said. But his wife didn't hear him. Within seconds, she disappeared in the sea of water.

He spent three days searching for her. He visited every clinic on Phuket. He walked into every room. All were packed with victims. His son, also named Josef, arrived Tuesday night to help search. On Wednesday morning, they arrived at the temple.

Wearing plastic gloves, they began ripping open the makeshift shrouds of the dead. Josef, the son, who is a doctor, had seen many corpses during his studies. But none like these, he said. At first, they tried scanning the deformed bodies for something recognizable like a wedding band or earrings. But soon they realized that thieves had scoured the coasts and ripped all the valuables from the dead before they arrived at the temple. Finally, the men came upon a body they thought was hers. The son studied the corpse, confirming her identity by a few unmistakable marks.

Father and son then returned to the ruins of the couple's room at the luxury resort, hoping to find traces of Maria's last days. Once, the room offered a picturesque view of the stunning Khao Lak coastline. Now it was mere debris. They found little solace. "At least now we know that when she died, my mother was wearing her orange bikini, not her blue one," the younger Vavrina said.

No one is quite sure what will become of the bodies surrounding the temple or how they will be identified before being burned. Relief workers are resisting burning anyone who looks like a tourist or a foreigner before they have been identified and a death certificate has been issued. So far, there has been no sign of any foreign officials at the temple. Consulates have sent dozens of representatives to the island but they, too, are overwhelmed by the number of bodies. Even if detectives do manage to get DNA samples from bodies before they are burned, it will be days before any of the results come back -- days before any of these terrified families get any news.

Outside the temple, the Vavrinas carried their corpse to the fire. "My mother spent three days lying dead in the heat," said Josef the son. "Now, finally, she will find peace." His father sat motionless. As the fire continued to burn, he got up and walked along the street, not caring in which direction he was headed.

This article has been provided by Der Spiegel through a special arrangement with Salon. ) For more from Europe's most-read newsmagazine, please visit Spiegel Online at http://www.spiegel.de/international or subscribe to our daily newsletter.