"I got diagnosed with an STD since we played" 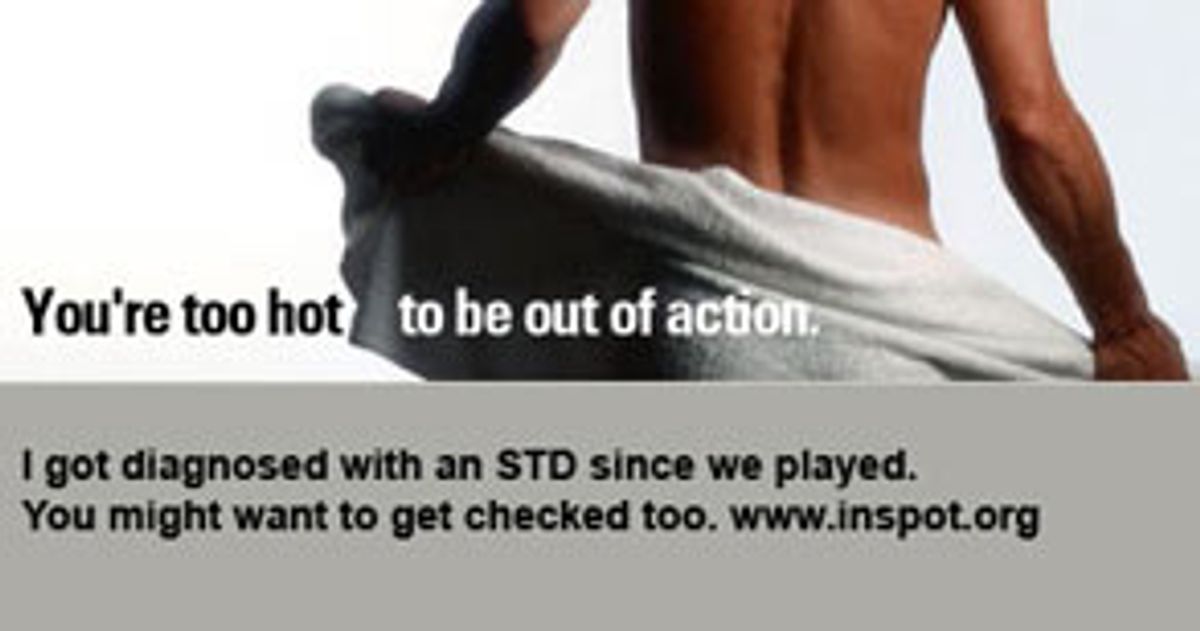 (Hey, thanks! you think, admiring the accompanying graphic of a towel-clad male torso.)

"I got diagnosed with an STD since we played."

You follow the link on the card to inSPOT.org, Internet Notification Service for Partners or Tricks. ("Tricks" is slang for sexual partners who are casual but not necessarily paying.) From there, you can find a place in San Francisco -- where the Web site is based -- to get tested. Ideally you'll actually go for the test and then find out you're clean or, if not, how to get whatever you've gotten under control before you inadvertently bestow it on someone else.

The Web site, created by a San Francisco group called Internet Sexuality Information Services and sponsored by the San Francisco Department of Public Health, is by no means intended as a resource for bitter exes wishing to play practical jokes. Launched in October, inSPOT.org is believed to be the first of its kind: a convenient, anonymous (if you wish) means for gay men to let their sex partners know they should get tested -- a crucial means of disease control. Sexually transmitted diseases "are part of life," reads an inSPOT.org tag line. "One reason they're so common has nothing to do with sex, and everything to do with silence." The site's creators say the e-cards offer an attractive alternative to the prospect of turning over partner names to the DPH and letting it do the dirty work. "People are meeting online -- why not use the same technology to control the spread of STDs?" says Dr. Jeffrey Klausner, director of STD Prevention and Control Services at the San Francisco Department of Public Health.

So far, this logic seems to be working. "Most people I've talked to are saying, 'Why did it take so long to come up with this?'" says Karl Knapper, a neighborhood organizer for the STOP AIDS Project and a member of inSPOT.org's volunteer community advisory board. InSPOT.org is now getting about 750 visitors per day. In November 281 e-cards were sent to 461 people, with syphilis and gonorrhea the two most frequently cited STDs. (A drop-down menu on the card interface allows users to specify.) Seventy-five percent were sent anonymously. More than half of the people who received a card clicked through to learn more and get information about testing sites. "We're reaching the people most at risk -- those who have had sex with someone who was diagnosed positive for an STD and people who most likely otherwise would not be notified," says Deb Levine, executive director of ISIS.

Technically, anyone, anywhere, of any persuasion, could use inSPOT.org's cards. But inSPOT.org was developed to target San Francisco's gay men because of what Klausner calls "an epidemic" of syphilis and other STDs, including chlamydia and HIV. In 1998, Klausner says, there were 10 cases of early syphilis among local gay and bisexual men. Last year, there were over 500. The Centers for Disease Control and Prevention has said that STDs "continue to be a major health threat in the United States," estimating that over 19 million infections occur annually. Syphilis, for one -- while decreasing among women and African-Americans in general -- is on the rise specifically among men who have sex with men, who may account for as much as 60 percent of all early cases reported in 2003.

To be sure, one person with one STD may take some antibiotics and be done with it. But it doesn't work that way for all 19 million infections. While syphilis is curable with antibiotics, when left to its own devices it can lead to organ damage, brain damage, even death; it can also make HIV easier to transmit. Chlamydia is curable as well, but it often presents no symptoms -- and someone who doesn't know he has it can wind up with an inflamed prostate, urethral scarring, even infertility. Also curable but dangerous: gonorrhea, crabs and other bacterial or viral infections. Hepatitis, herpes, human papillomavirus (HPV) and, of course, HIV are treatable but not curable. Like the others, they're most threatening when they go undetected and untreated.

Why the "epidemic"? Research points, in part, to the Internet. Klausner says that more than 50 percent of San Francisco syphilis cases can be traced to encounters that originated online. Back in the day, members of the gay community say, even random hookups were with people you met at bars or parties and would likely run into again. Now there are not only chat rooms and personals sites but also sex parties organized entirely via e-mail list. "These days it's a lot easier to have sexual encounters where you do not know who your partner is," says Knapper. "The virtual world is a lot bigger and more anonymous than the real world." Some have found that compared with people who find partners the old-fashioned way, Internet sex seekers are more likely to have previous STDs, more partners, more anal sex (with a higher risk of disease transmission) and more sexual exposure to HIV-positive partners.

Still, there's no simple blame-the-Internet explanation for the surge in STDs. What happened, for example, to all the urgent life-or-death messages about safe sex? Efforts at HIV awareness in the 1980s seem to have contributed to that decade's decline in STDs. But today, some advocates point to "condom fatigue," suggesting that the "safe sex" message, now 20 years old, sounds very five minutes ago. What's more, AIDS is no longer perceived as the grim reaper it once was. Because treatments for HIV have been successful, the disease is seen as "maybe not curable, but manageable with a few pills a day," Klausner says. "People are not as afraid. Loss of fear can be a good thing, but fear is also a highly motivating factor, especially when it comes to safe sex."

So as the quantity, anonymity and unsafeness of encounters go up, so does the risk of infection. And at the same time, the likelihood that past sex partners will be informed they're at risk goes down.

Standard partner-notification procedure is this: When someone tests positive for an STD, the DPH requests information about who else may have been infected and informs whomever they can (without revealing their sources) via phone, via e-mail or in person. But many patients balk at the prospect, often concerned about putting confidential information, and such personal news, in the hands of a stranger. "Eighty percent of people diagnosed with an STD choose not to give the information to the DPH -- they say 'I'll tell my partners myself,'" says Levine at ISIS. Then shame or denial takes over: Patients often flake out, or never meant to spread the word in the first place. "What we've heard from the community is, 'We tell our primary partners, we may tell our sex buddies, but we do not tell our tricks,'" says Levine. "So here we have 80 percent of people walking out of the Department of Public Health not telling 80 percent of their partners," she estimates. Klausner calculates that as many as 93 percent of people potentially exposed go uninformed.

But if the Internet is part of the problem, it's also part of the solution, say health advocates, including the CDC. "Typically, when we identify high-risk venues, the next step is to go to those high-risk venues and provide information and resources to make sure they're as safe as can be. It's not different with the Internet," says Dr. Ronald Valdiserri, deputy director of the CDC's National Center for HIV, STD and TB Prevention. "Public health workers have gone into bathhouses and bars to try to reach out to sexually active gay and bi men, and now we're just transferring the same kind of activities into these new venues." He mentions that Internet service providers such as AOL have been willing to place free banner ads about STDs in chat rooms; gay personals sites such as Manhunt.net have evidently been willing to do the same. Health departments have also been able to work with chat room providers to notify users of specific STD outbreaks without compromising their anonymity.

The Internet also offers a mode of communication both more distant and direct than face to face or phone to phone. InSPOT.org's electronic postcards, for their part, take the place of a touchy conversation -- a conversation that might otherwise not take place at all. When it comes to certain partners, "you may be very intimate with them but have no desire to chat with them, especially to give them such highly charged information," says Albert Hilgart, an Internet user-experience specialist who is a member of inSPOT.org's community advisory board. What the site offers, he says, is "a way to talk about it without talking about it."

Klausner concurs. While you can add a personal message to the card (and the site offers some guidelines), you don't have to. "People don't have to struggle with language. It's set up right there for people to inform others from the privacy of their home."

A couple of the six card options are worded casually but plainly: "Heads up ... I caught an STD since we messed around and you might have too. Please take care of yourself." Others are more irreverent -- "It's not what you brought to the party, it's what you left with" -- and that's also part of the plan. The goal is not only to provide a palette of choices (including serious ones) for different personality types but also to use humor to chip away at the stigma associated with STDs (much the same way condoms were marketed with funny novelty packaging in the 1980s, to help them go from ickily clinical to collect-'em-all cool.)

InSPOT.org users also needn't fear that Big Brother will somehow be able to print out a list of card senders, as the site does not capture such data in the first place. What about the risk of someone misusing the site to send an e-card as a "joke"? Says Knapper: "The advisory board struggled and thought hard about how the site could be misused." Ultimately, they simply posted very clear community guidelines that they trust will help build, he says, "a culture that makes people think this isn't something to be played around with." Adds Levine: "We are relying on the goodness of human nature."

The increase in STDs has caused other cities and organizations to get creative, too -- whether the focus is partner notification or other ways of shortening the distance between potentially affected people and testing or treatment. In Denver and elsewhere, some clinics use "patient-delivered partner therapy," in which a physician may give a patient (usually one with chlamydia) extra treatment drugs to take home to a partner. In Seattle, some pharmacies have agreed to do the same. (These approaches are legal only in certain states. California was the first state to legalize patient-delivered therapy.)

Still, among health advocates, effective notification remains a primary goal. "The standard way of dealing with partner notification leaves a lot to be desired. It's very important because it's a major impediment in dealing with the spread of STDs," says Dr. Kees Rietmeijer, director of the STD control program at the Denver Public Health Department. That's why, he says, "this field is really moving. There are a lot of people thinking about it and coming up with interesting ideas. And San Francisco is at the forefront."