Susan Sontag wrote out of glorious, coldblooded anger. It's painful that today, when clarifying rage is about all we have left, her powerful voice is silent. 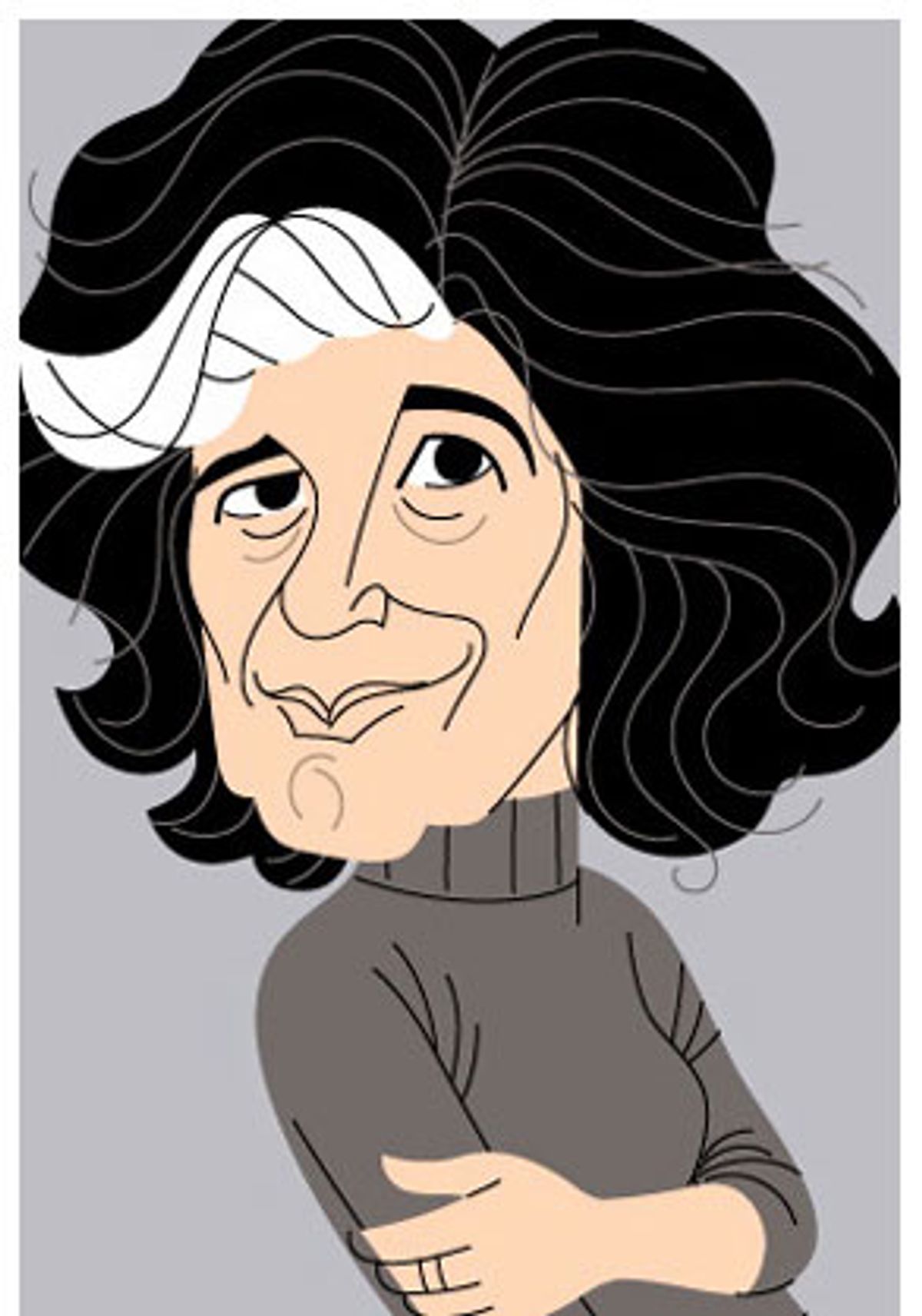 Mutual friends told me about an evening they spent with Susan Sontag a few months before she entered her final illness. They were talking about George Plimpton's peaceful death, in his sleep, and my friends agreed that they would want to go that way. Sontag replied that she wouldn't. She wanted to die of cancer -- "I want to experience my death." How resplendently Sontag. The contrarianism, the fearlessness, the romantic infatuation with experience, the almost Faustian hunger for knowledge, the absolute and unfaltering commitment to consciousness and, of course, the sensuality of the intellect: Always, always she wanted to feel -- and to think about what she felt.

The recent photographs that accompanied Sontag's obituaries in the world press may have given her the last opportunity to shock her audience. In 1992, when, a few months before her 60th birthday, she posed for a portrait on the cover of the New York Times Magazine, she was still beautiful. By the time she died, the beauty had gone. But you can't say she lost her looks. She looked great. She'd always been exasperated with the level of scrutiny devoted to her appearance, and it was gratifying to watch the way she carried herself after her gorgeousness deserted her. She seemed pleased. Accepting phone-in questions on a long, incisive "Bookspan: In Depth" interview ("Sometimes I think we only have one party, the Republican Party, and it has a branch called the Democratic Party") in March 2003, she projected something very different from the old hauteur. Her strong jaw had taken over her face, and the icy fineness had given way to power and warmth. Sontag was never lacking in self-regard; she was hardly unaware of the figure she cut; but her lack of personal vanity was startling -- as startling as her beauty.

At least, that's how it looked from a distance, to me. I never met Sontag. My relation to her was entirely one of reader to writer, and in "Sontag & Kael" I proffered some judgments I know she could never have forgiven me for. No writer is that lacking in vanity -- and when it came to her writing, Sontag was as preening as any other master. Above all she would have been angry at me for preferring, as almost everybody does, her criticism to her fiction. But then Sontag was no stranger to quixotry. Her impossibly high standards were a golden form of quixotry, and in her lexicon "quixotry" was an accolade. Moralism wouldn't amount to much without determination against terrible odds; not that long ago, Václav Havel and Nelson Mandela, to cite the most obvious examples, would have been called quixotic.

But if I wrote things she would have disliked (I tell myself), nobody would have been more disgusted by hollow praise. Not only wasn't praise something she sought, but she seemed to go out of her way to attract its opposite. Much about Sontag -- as her many obituaries have pointed out -- was maddening. There was a lot of belligerence you had to cut through and shooting-from-the-hip you had to clear away in order to get to the greatness. One of her acolytes spent a good hour on the phone insisting to me that the only valuable form of criticism is the form Sontag practiced: praise. Her portrait essays are small festivals of praise. Though I love those essays, I don't agree. The only valuable form of criticism is the truth. Between truth and justice "one hopes not to have to choose," Sontag wrote. "But when a choice is necessary -- as, alas, it sometimes is -- it seems to me that an intellectual ought to decide for the truth." That's why taking her to task was, if this doesn't sound too self-serving, a necessary component of honoring her. She never claimed she never erred; in fact, she took pride in correcting her errors. But she was always an angry writer, and her anger angered her readers, roiling around in the mind until -- magically -- it settled into thought.

She was angry at the philistinism of the consumer culture into which she had the good and bad luck to be born, and what I feel most bereft over is the loss of that anger, since more than ever it seems like the only rational response to the society we live in. One reason, I believe, she so often limited her literary essays to praise was that once she started in the other direction she couldn't stop. She didn't handle her anger gracefully. That was why I never thought of her as a great political writer. The greatness was in her cool, hardheaded essays on aesthetic matters; as an aesthete defending the senses against the intellect, the new against the established, silence against noise, she was magnificently coldblooded. But she was hotblooded and hotheaded when she turned to politics. I still find myself backing off nervously from her vitriolic essays and speeches on the Vietnam War, even as I endorse the politics behind them. In those writings, frantic rage ("We are choking with shame and anger") is motivated by a frantic need: to do something -- namely, to stop the war. And for all the incendiary rhetoric, the spewing fury, the bitter eagerness to bite the hand of America, the urgency of the need to halt the war implied a hope -- a shred of hope. Something could be done. The war could be stopped.

The political writing of her final years is different. I'm referring to her profoundly humane and reflective 2003 essay "Regarding the Pain of Others," whose theme was atrocity pictures, and its magisterial pendant -- written when she was already sick with the cancer that would, after 30 years, finally kill her -- her 2004 essay "Regarding the Torture of Others," on the Abu Ghraib photographs. The quality of the prose in those writings has changed because the quality of the anger has changed. But given the disheartening events that elicited that shift, not even Sontag -- who could talk about cultural achievement with a Nietzschean absolutism that bordered on the callous -- could have taken much consolation from her triumph. By 2004, the United States was a society very different from what it had been even during the ugliest years of the Vietnam era, and the rage smoldering beneath every sentence of that great, judgmental final essay was a different order of rage: a rage without hope. Speaking out, speaking angrily no longer had a goal so simple as stopping the war, because the war was, in the phrase she hammered at with disquieting control, an "endless war." "The torture of prisoners is not an aberration." "The photographs are us."

Those are despairing words, and since November that despair has become widely shared. But despair isn't really a Sontagian emotion. It's worth noting that her repeated "endless war" carefully avoids the easy, even useful echo of Orwell's "permanent war"; the conditions of "1984" don't exactly apply to the current situation. It's worth further noting that this kind of care with words implies the opposite of despair. The very act of writing implies the opposite of despair.

Which is why I feel so bereft at the loss of Sontag's anger. In this world, at this time, that anger is about the only thing we've got to fight them with.